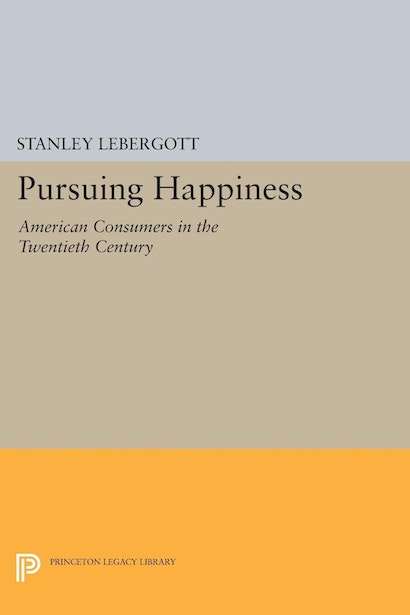 Whether watching baseball or undergoing heart surgery, Americans have bought a variety of goods and services to achieve happiness. Here is a provocative look at what they have chosen to purchase. Stanley Lebergott maintains that the average consumer has behaved more reasonably than many distinguished critics of “materialism” have suggested. He sees consumers seeking to make an uncertain and often cruel world into a pleasanter and more convenient place — and, for the most part, succeeding. With refreshing common sense, he reminds us of what many “luxuries” have meant, especially for women: increased income since 1900 has been used largely to lighten the backbreaking labor once required by household chores.

"Writing with lucidity, wit, and forthrightness ... Lebergott argues that the great American shopping spree is not mere self-indulgence but an essential part of what has been a remarkably successful pursuit of happiness."—Jonathan Yardley, The Washington Post

"Lebergott ... entertainingly explores that history [of consumerism] and ... documents in marvelous detail what we buy, what it costs, and how our choices have changed over time"—Doug Bandow, Fortune

"What did Americans consume during the 20th century, and what happiness did they reap? In addressing this question, the economist Stanley Lebergott, has written in effect two books. Pursuing Happiness is both an entertaining compilation of just what Americans consume and of how consumption patterns have changed, and a truculent ideological tract."—New York Times Book Review

"Lebergott's entrancing ... Pursuing Happiness ... makes the point that much of the twentieth-century spending binge of Americans, sneered at by the intelligentsia from Veblen to Galbraith, was to substitute for housewives' time."—Don McCloskey, University of Iowa