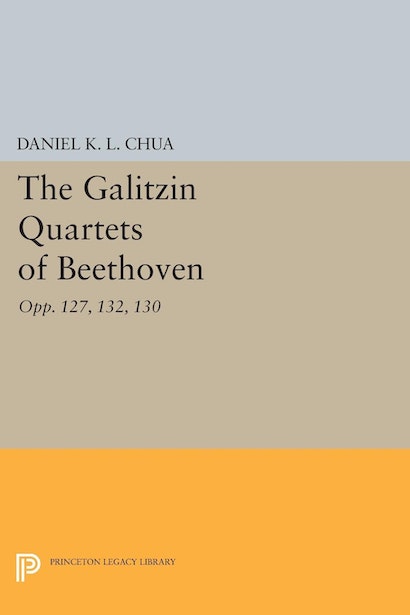 This study is an analysis of the first three of Beethoven’s late quartets, Opp. 127, 132, and 130, commissioned by Prince Nikolai Galitzin. The five late quartets, usually considered as a group, were written in the same period as the Missa solemnis and the Ninth Symphony, and are among the composer’s most profound musical statements. Daniel K. L. Chua believes that of the five quartets the three that he studies trace a process of disintegration, whereas the last two, Opp. 131 and 135, reintegrate the language that Beethoven himself had destabilized.

Through analyses that unearth peculiar features characteristic of the surface and of the deeper structures of the music, Chua interprets the “Galitzin” quartets as radical critiques of both music and society, a view first proposed by Theodore Adorno. From this perspective, the quartets necessarily undo the act of analysis as well, forcing the analytical traditions associated with Schenker and Schoenberg to break up into an eclectic mixture of techniques. Analysis itself thus becomes problematic and has to move in a dialectical and paradoxical fashion in order to trace Beethoven’s logic of disintegration. The result is a new way of reading these works that not only reflects the preoccupations of the German Romantics of that time and the poststructuralists of today, but also opens a discussion of cultural, political, and philosophical issues.

"Daniel Chua's new study ... is perhaps the closest reading of these works to emerge in recent years. The author gives a thoughtful account of the music, and identifies with precision many of the interpretive difficulties associated with it. Moreover, he refuses to give up trying to understand them when these difficulties seem insurmountable."—The Times Literary Supplement