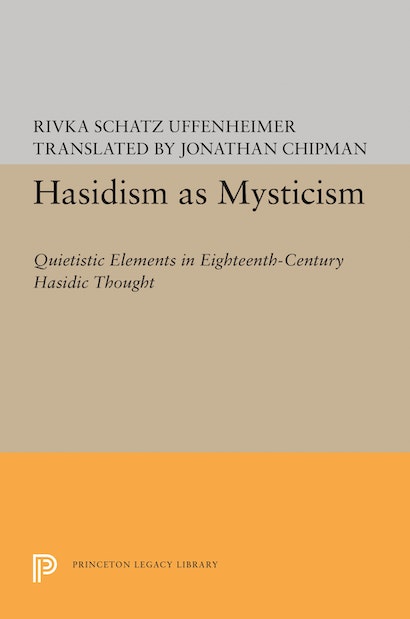 Offered here for the first time in English translation, Hasidism as Mysticism is a classic in its field. Using the tools of phenomenology, Rivka Schatz Uffenheimer places Hasidism squarely in the context of religious studies. Hasidism’s theoretical texts have been largely ignored by historians of the movement, but Schatz Uffenheimer analyzes these materials fully, disclosing the mystical, quietistic tendencies that existed alongside Hasidism’s more activist, popular elements. The author carefully reviewed this translation of her work; it includes a revised introduction with much new material, two new chapters, and an appendix containing a translation, history, and literary analysis of one of the few extant texts attributed to the Baal Shem Tov.

Schatz Uffenheimer’s inquiry covers the full gamut of Hasidic life and thought, embracing such topics as the emphasis on joy and the concomitant ban on sadness and regret in Hasidism, the focus on contemplative rather than petitionary prayer, the subordination of the mizvot (commandments) to the spiritualistic goal of devequt (attachment to God), and the anarchic elements of Hasidism’s approach to life within society. Also discussed are the problematic role of Torah study resulting from this spiritualistic emphasis, the movement’s neutralization or internalization of the traditional concept of a historical messiah, and the transformation within Hasidism of traditional concepts borrowed from Kabbalah. The author’s illuminating hints as to the affinity between Hasidism and Christian Quietism should be of particular interest to scholars in the field.

Rivka Schatz Uffenheimer (1927-1992) was the Edmonton Community Professor of Jewish Mysticism at the Hebrew University of Jerusalem. One of the outstanding students of Gershom Scholem, she forged her own path in the world of scholarship. Her research encompassed a wide range of areas: Zohar and Lurianic Kabbalah, Sabbatianism, Hasidism, and the typology of Jewish messianism. In addition, she was deeply involved in the ongoing discussion concerning the major spiritual and existential issues confronting contemporary Judaism and the State of Israel.

"A great strength of this interesting and rewarding book is the rich documentation: through the many quotations from the Hasidic literature the reader comes away with a good sense of the toneof Hasidic teaching and preaching."—Theological Book Review