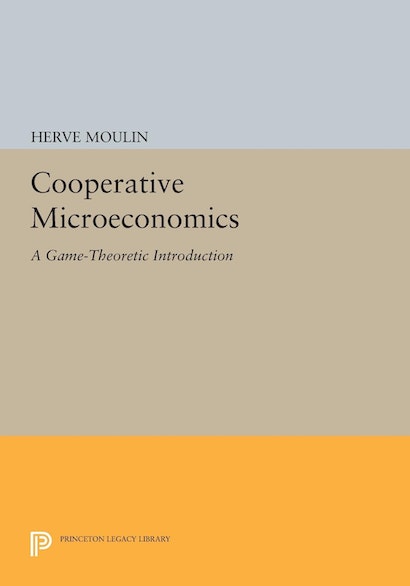 Over the past fifty years game theory has had a major impact on the field of economics. It was for work in game theory that the 1994 Nobel Prize in Economics was awarded. Although non-cooperative game theory is better known, the theory of cooperative games has contributed a number of fundamental ideas to microeconomic analysis. Cooperative Microeconomics is the definitive textbook on these contributions.

Designed to be used by undergraduate and graduate students, the book provides a thorough introduction and overview of its subject. Hervé Moulin distinguishes among three primary modes of cooperation: cooperation by direct agreements; cooperation by just, equitable compromise; and cooperation by decentralized behavior. This tri-modal methodology is applied successively to the exchange of private goods, the fair division of unproduced commodities, the cooperative production of private and public goods, and cost-sharing.

Moulin proposes an elementary and self-contained exposition (supplemented by over 125 exercises) of the main cooperative concepts for microeconomic analysis, including core stability, deterministic solutions (such as the Shapley value), and several broad principles of equity (such as the No Envy and Stand Alone tests). The book also covers the most important failures of the decentralized behavior: the tragedy of the commons and the free rider problem in the provision of public goods. Cooperative Microeconomics is the first book of its kind, and it will be widely used in courses in microeconomics and game theory.

"The style of the book is excellent. The development of the uses of cooperative models and the care lavished on both examples and exercises makes it a valuable contribution to the literature. Furthermore, it provides an introduction to the many uses of cooperative game theory in economics which will serve to show how much this work is influencing the mainstream of thought directed to the development of macroeconomics."—Journal of Economic Literature

"Hervé Moulin has shown in his previous work his great skill at presenting sometimes complex material in a simple way, and this book provides further evidence of his pedagogical talent. He never loses sight of the essential ideas and he makes very good use of examples."—William Thomson, University of Rochester