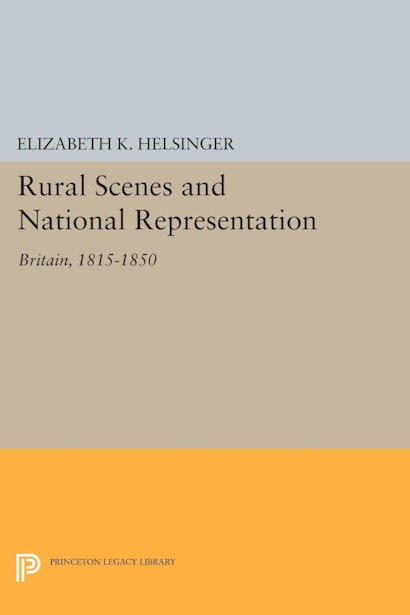 Elizabeth Helsinger’s iconoclastic book explores the peculiar power of rural England to stand for conflicting ideas of Britain. Despite the nostalgic appeal of Constable’s or Tennyson’s rural scenes, they record the severe social and economic disturbances of the turbulent years after Waterloo. Artists and writers like Cobbett, Clare, Turner, Emily Brontë, and George Eliot competed to claim the English countryside as ideological ground. No image of rural life produced consensus over the great questions: who should constitute the nation, and how should they be represented? Helsinger ponders how some images of rural life and land come to serve as national metaphors while others challenge their constructions of Englishness at the heart of the British Empire.

Drawing on recent work in social history, nationalism, and geography, as well as the visual and literary arts, Helsinger recovers other possible and alternative readings of social ties embedded in the imagery of land. She reflects on the power of rural images to transfer local loyalties to the national scene, first popularizing then institutionalizing them. By turning a critical gaze on these scenes, she comments on the difference between art and ideology, and the problems and dangers of asserting any kind of national identity through imagery of the land.

"Helsinger's discussions of images and texts offer new and important insights into the political and cultural uses of the countryside, and they will essential reading for anyone interested in that history of this period. While it is impossible to do justice to the scope, interest, and nuance of her arguments, this review must suffice to say that this is the kind of book students of British landscape painting and literature will turn to again and again with pleasure and profit."—Albion