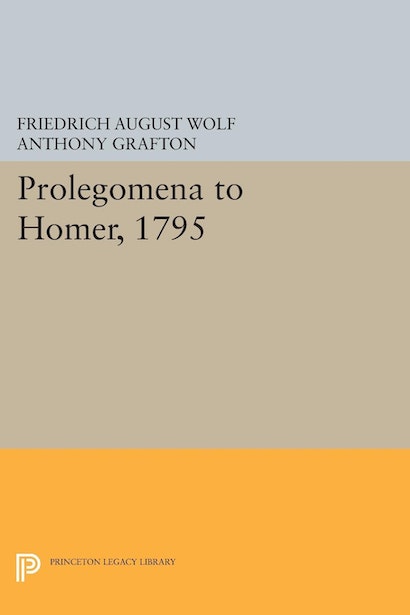 The subjects Wolf addressed have dominated Homeric scholarship for almost two centuries. Especially important were his analyses of the history of writing and of the nature of Alexandrian scholarship and his consideration of the composition of the Homeric poems — which set the terms for the analyst/unitarian controversy. His exploration of the history of the transmission of the text in antiquity opened a new field of research and transformed conceptions of the relations of ancient and modern culture.

"Wolf's Prolegomena has long been recognized as one of the most important books in the history of classical studies. . . . This English translation, with a detailed historical introduction, makes it fully accessible to the modern reader. . . . The analytical and unitarian interpretations of Homer have, indeed, been argued over ever since. It is gratifying that the work which started this famous controversy is available once again."—H. B. Nisbet, Times Higher Education Supplement

"This is the first English translation of Wolf's Prolegomena ad Homerum, a seminal work for classical scholarship. An introduction places Wolf in the cultural setting of eighteenth-century Germany, especially with regard to Homeric studies, showing how he was influenced by contemporary textual criticism of the Old Testament, and how Wolf's work was originally received."—Choice