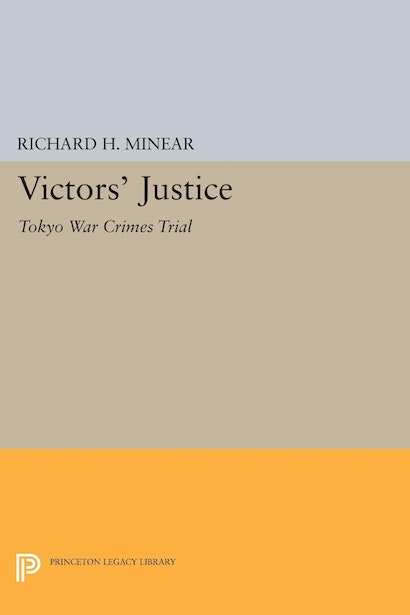 The klieg-lighted Tokyo Trial began on May 3, 1946, and ended on November 4, 1948, a majority of the eleven judges from the victorious Allies finding the twenty-five surviving defendants, Japanese military and state leaders, guilty of most, if not all, of the charges. As at Nuremberg, the charges included for the first time “crimes against peace” and “crimes against humanity,” as well as conventional war crimes. In a polemical account, Richard Minear reviews the background, proceedings, and judgment of the Tokyo Trial from its Charter and simultaneous Nuremberg “precedent” to its effects today.

Mr. Minear looks at the Trial from the aspects of international law, of legal process, and of history. With compelling force, he discusses the motives of the Nuremberg and Tokyo proponents, the Trial’s prejudged course—its choice of judges, procedures, decisions, and omissions—General MacArthur’s review of the verdict, the criticisms of the three dissenting judges, and the dangers inherent in such an international, political trial. His systematic, partisan treatment pulls together evidence American lawyers and liberals have long suspected, feared, and dismissed from their minds.