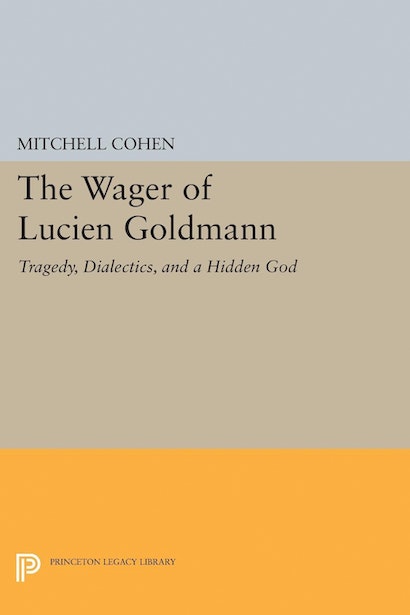 In The Wager of Lucien Goldmann, Mitchell Cohen provides the first full-length study of this major figure of postwar French intellectual life and champion of socialist humanism. While many Parisian leftists staunchly upheld Marxism’s “scientificity” in the 1950s and 1960s, Lucien Goldmann insisted that Marxism was by then in severe crisis and had to reinvent itself radically if it were to survive. He rejected the traditional Marxist view of the proletariat and contested the structuralist and antihumanist theorizing that infected French left-wing circles in the tumultuous 1960s.

Highly regarded by thinkers as diverse as Jean Piaget and Alasdair MacIntyre, Goldmann is shown here as a socialist who, unlike many others of his time, refused to portray his aspirations for humanity’s future as an inexorable unfolding of history’s laws. He saw these aspirations instead as a wager akin to Pascal’s in the existence of God. “Risk,” Goldmann wrote in his classic study of Pascal and Racine, The Hidden God, “possibility of failure, hope of success, and the synthesis of the three in a faith which is a wager are the essential constituent elements of the human condition.” In The Wager of Lucien Goldmann, Cohen retrieves Goldmann’s achievement—his “genetic structuralist” method, his sociology of literature, his libertarian socialist politics.

Mitchell Cohen, co-editor of Dissent magazine, is Professor of Political Science at Baruch College and the Graduate School of the City University of New York. He is the author of Zion and State (Blackwell/Columbia) and editor of Rebels and Reactionaries (Dell). During 1993-94, he was National Endowment for the Humantities Fellow at the Institute for Advanced Study in Princeton.

"Without question one of the most stimulating works in intellectual history and theory to appear in the last two decades.... In examining the origins of Goldmann's ideas, the theorist's preoccupations ... and the enduring significance of his work, Cohen demonstrates a rare, broad-ranging mastery of theory and an ability, like that of Goldmann himself, to uncover the essential historical and social message located within the works of an individual author."—Choice

"A pioneering and superbly documented study of a major intellectual figure of the European left. Cohen offers a fascinating analysis of the main trends within French and European social thought, the rise of structuralism, and the debate between Goldmann and the "anti-humanists." It broadens our understanding of Western Marxism."—Vladimir Tismaneanu, University of Maryland