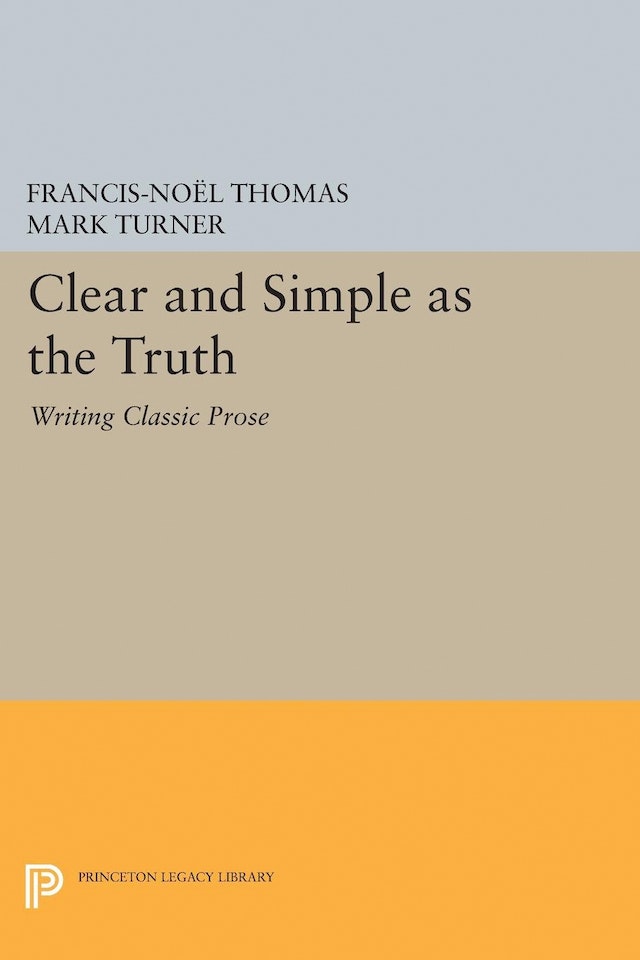 Everyone talks about style, but no one explains it. The authors of this book do; and in doing so, they provoke the reader to consider style, not as an elegant accessory of effective prose, but as its very heart.

At a time when writing skills have virtually disappeared, what can be done? If only people learned the principles of verbal correctness, the essential rules, wouldn’t good prose simply fall into place? Thomas and Turner say no. Attending to rules of grammar, sense, and sentence structure will no more lead to effective prose than knowing the mechanics of a golf swing will lead to a hole-in-one. Furthermore, ten-step programs to better writing exacerbate the problem by failing to recognize, as Thomas and Turner point out, that there are many styles with different standards.

In the first half of Clear and Simple, the authors introduce a range of styles — reflexive, practical, plain, contemplative, romantic, prophetic, and others — contrasting them to classic style. Its principles are simple: The writer adopts the pose that the motive is truth, the purpose is presentation, the reader is an intellectual equal, and the occasion is informal. Classic style is at home in everything from business memos to personal letters, from magazine articles to university writing.

The second half of the book is a tour of examples — the exquisite and the execrable — showing what has worked and what hasn’t. Classic prose is found everywhere: from Thomas Jefferson to Junichirō Tanizaki, from Mark Twain to the observations of an undergraduate. Here are many fine performances in classic style, each clear and simple as the truth.

"Clear and Simple as the Truth holds the promise of raising the level of the nation's prose.... The book is full of cogency and insight."—Frederick Crews

"A work of great intellectual elegance and power. I have read it with a lot of pleasure, admiring the wisdom and economy of its reflections and the extraordinary range of its citations."—Claude Rawson, Yale University

"A treatment of the classic style that manifests the virtues of the writing it propounds, expounds, and exemplifies in a wealth of fascinating passages, brilliantly analyzed."—M. H. Abrams, Cornell University

"Could well be the most important discussion of style since the great classical rhetoricians."—Wayne C. Booth, University of Chicago

"One of the best discussions of style that I have recently read."—Richard Preston, author of The Hot Zone

"Thanks to Thomas and Turner, the cognitive revolution has finally caught up with the analysis of style—brilliantly, learnedly, and, above all, readably."—David Lee Rubin, University of Virginia

"The authors give one of the best discussions of style that I have ever read. Thomas and Turner juxtapose conventionally thought of as disparate, and thereby suggest possible new avenues of interpretation for critics of individual authors. Clear and Simple as the Truth occupies a niche of its own, as a kind of hybrid between books on writing such as The Elements of Style and The Reader over Your Shoulder, and more theoretical studies of representation, such as Mimesis."—Richard Preston, author of American Steel