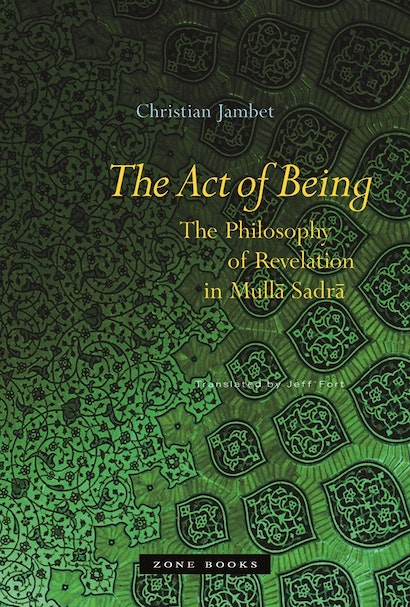 This recent study by Christian Jambet explores the essential elements of the philosophical system of Mullā Sadrā Shīrāzī, an Iranian Shi‘ite of the seventeenth century. The writings of Mullā Sadrā Shīrāzī (d. 1640) bear witness to the divine revelation in every act of being, from the most humble to the most eminent.

More generally, Islamic philosophy employs an ontology of the real that is important to the destiny of metaphysics, an ontology that belongs to our own universe of thought. Jambet’s brilliant study seeks to make sense of this intuition of the real, nourished by the Sufism of Ibn al-‘Arabī, the philosophy of classical Islam, the thought inherited from the Greeks, and the esoteric and mystical dimension of Shi‘ism.

Mullā Sadrā saw the world as moving ceaselessly in an uninterrupted revolution of its substances, in which infinite existence breaks through the successive boundaries of the sensible and the intelligible, the mineral and the angelic. In a flourish of epiphanies, in the multiplied mirror of bodies and souls, Mullā Sadrā perceived absolute divine liberty.

Revealing freedom in the metamorphosis of the believer and the sage, existence teaches the imitation of the divine that can be seen “in its most beautiful form.” Reading Mullā Sadrā reveals the nexus of politics, morality, liberty, and order in his universe of thought — a universe, as Christian Jambet shows, that is indispensable to our understanding of Islamic thought and spirituality.

“This … is not simply an antiquarian passion. It is a matter of discovering not an old and worn-out artifact but rather what Islam says about being as being. It is also a matter of knowing what Islam says about its own being, its own decision concerning being….It is a matter of understanding the ontology of Islam in both senses of the expression: the doctrine of being that Islam slowly brought to completion, and that which constitutes the being of Islam itself, its ontological foundation.”— from the preface to The Act of Being

"The English translation of Jambet’s challenging work on the philosophy of Mullā Sadrā is an exciting event … .It is a welcome and challenging contribution to the study of Islamic philosophy not just in the lucidity of its exposition but also in the questions it raises and the critical evaluations it will inspire."—The Muslim World Book Review