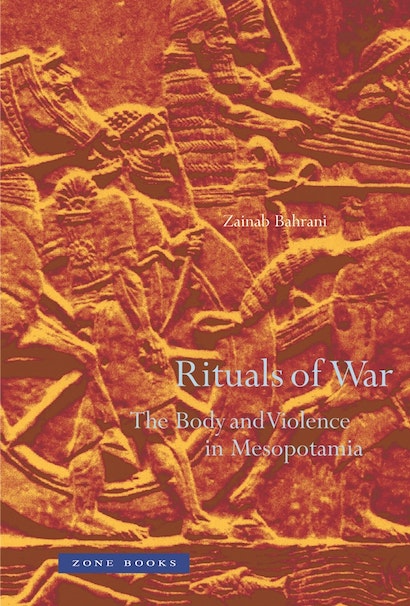 Rituals of War is an investigation into the earliest historical records of violence and biopolitics. In Mesopotamia, ancient Iraq (ca. 3000–500 BC) rituals of war and images of violence constituted part of the magical technologies of warfare that formed the underlying irrational processes of war. In the book, three lines of inquiry are converged into one historical domain of violence, namely, war, the body, and representation.

Building on Foucault’s argument in Discipline and Punish that the art of punishing must rest on a whole technology of representation, Zainab Bahrani investigates the ancient Mesopotamian record to reveal how that culture relied on the portrayal of violence and control as part of the mechanics of warfare. Moreover she takes up the more recent arguments of Giorgio Agamben on sovereign power and biopolitic to focus on the relationship of power, the body and violence in Assyro-Babylonian texts and monuments of war.

Bahrani brings together and analyzes facets of war and sovereign power that fall under the categories of representation and display, the aesthetic, the ritualistic, and the supernatural. Besides the invention of the public monument of war, and the rituals of iconoclasm, destruction, and relocation of monuments in war, she investigates formulations of power through the body, narrative displays in battle, the reading of omens before the battle, and historical divination through the body and body parts. The author describes these as the magical technologies of war, the realm of the irrational that enables the ideologies of just war in the distant past as today.

"Rituals of War is an ambitious attempt to find new ways of viewing the ancient past, and for that Zainab Bahrani should be applauded. What makes Bahrani’s examination of the Battle of Til-Tuba so fresh and exciting is that she is the first to combine the art-historical and narrative evidence."—Times Literary Supplement

“Zainab Bahrani’s groundbreaking study of the arts of war in ancient Mesopotamia may seem at first glance to have only the remotest connection to the current war on terror and the war in Iraq. But her investigation of the ‘magical technologies’ of ancient imperial warfare could not be more timely. Beheadings, mutilations, images of torture and triumph, displacement of populations, and ethnic cleansings justified as sacred missions are just as common today as they were in 653 BC. Instead of the divination of animal entrails, we have ‘actionable intelligence’ to provide the rationale for war and a set of dubious predictions of its outcome. This brilliant book is a must read for anyone who wants to understand the role of images in war, and the way that media, symbolic representations, and ritualistic spectacles of iconoclasm play a role just as important as weapons and the movement of armies.”— W. J. T. Mitchell, author of Picture Theory, What Do Pictures Want? and Cloning Terror: The War of Images, 9-11 to the Present