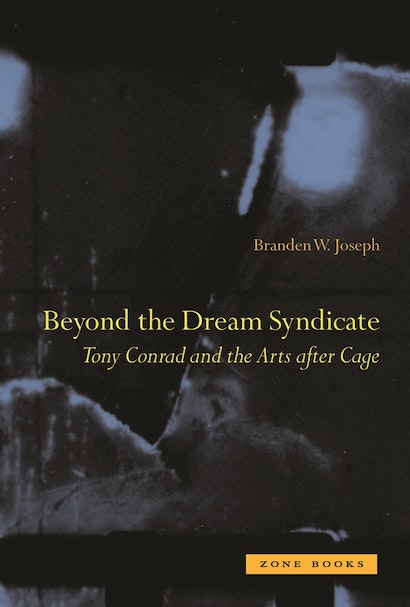 Tony Conrad is exemplary of the 1960s artist who remains inassimilable to canonic histories. Creator of the “structural” film, The Flicker, collaborator on Jack Smith’s Flaming Creatures and Normal Love, follower of Henry Flynt’s radical anti-art, member of the Theatre of Eternal Music and the first incarnation of The Velvet Underground, and early associate of Mike Kelley, Tony Oursler, and Cindy Sherman, Conrad has significantly impacted cultural developments from minimalism to underground film, “concept art,” postmodern appropriation, and the most sophisticated rock and roll. Yet Beyond the Dream Syndicate does not claim Conrad as a major but under-recognized figure.

Rather, by drawing on Deleuzian notions of the “minor” and the Foucauldian problematization of authorship found in Conrad’s own artistic/musical project, Early Minimalism, it disperses him into an “author function.” Neither monograph nor social history, the book takes Conrad’s collaborative interactions as a guiding thread by which to investigate the contiguous networks and discursive interconnections amongst the arts of the time.

"Beyond the fascinating and heretofore untold story recounted here, this book is important for the way its method mirrors its subject. Joseph moves across and between disciplinary genres of scholarship and thereby challenges the reader’s capacity to think outside familiar categories."—Leonardo

"Joseph’s Trojan horse harbors an estimable array of ‘minor’ figures whose radical practices change history, this history, for good. If registered, Joseph’s new mapping should disperse the ‘major’ names and terms that have for so long defined the postwar canon and its largely modernist models of theorization, models that limit the capacity to seize the expansive territory of experimentation that sparked postmodernism—pertinent now as the DNA for much contemporary art."—CAA Reviews

"Joseph writes powerfully…and with a brio most academic writers can only dream about. A major book."—The Wire

"A major contribution to our thinking about this period. An immensely engaging — and important — book."—Modern Painters

"Necessary and timely. Joseph has succeeded in substantially altering our notion of the so-called expanded field of art and film. With its meticulous research and precise mode of argumentation, Beyond the Dream Syndicate sets an important standard for future scholars."—Texte zur Kunst

"Beyond the Dream Syndicate is in fact a vital argument for recasting in unlikely, counterintuitive or even absurd ways the cultural histories we think we know best. It is also Conrad’s method with regard to his own past and that of his colleagues… . In Joseph’s hands it makes for a compelling and exemplary history."—Art Review

"Beyond the Dream Syndicate is a tour de force of both interpretative and historiographic acuity."—Art Bulletin

“Branden Joseph has emerged as one of our most accomplished and significant cultural historians. Ranging across film, music, and art, his new book focuses on the myriad accomplishments of Tony Conrad. The combination of its detailed scholarship across a very wide cultural field, the incisiveness of its analyses, and its ease in moving dialectically from the most precise formal details of works of art to their general social and political implications is remarkable. Overall his demonstration of the interrelatedness of different cultural spheres presents a radical challenge to the hermeticism of orthodox art history and to the simple-minded high/low binaries of affirmative cultural studies. It’s hard to imagine, let alone find, a work in sixties’ cultural historiography of comparably broad insight and originality.”—David E. James, author of The Most Typical Avant-Garde: History and Geography of Minor Cinemas in Los Angeles

“Beyond the Dream Syndicate is Branden W. Joseph’s admirable step outside the art historian’s typically crisp disciplinary boundaries. Joseph’s gambit is to use the brilliant, improbable Tony Conrad as his guide through one generation’s challenge to make art after John Cage. In the course of this expedition, we encounter rigorous meditations on minimalist music and visual art, Henry Flynt’s Concept Art, daily life with Jack Smith, the hilarious head-on collisions that resulted in the Primitives and the Velvet Underground, and the stroboscopic consequences of Conrad’s 1966 film The Flicker. This is a highly original, rewarding book, and one that will catch people by surprise. I imagine that this is a book for which many people have unconsciously been waiting.”—David Grubbs, Drag City recording artist

“Pivoting on Tony Conrad’s seminal role as artist and theorist, this groundbreaking book reexamines the post-Cagean milieu of early 1960s New York where visual art, music, film, and performance increasingly overlapped and hybridized. Richly detailed, scrupulously researched, Joseph’s brilliant analysis deploys a Foucauldian model to reformulate crucial questions of artistic authorship, tease out the political and social implications of Conrad’s prescient production and interactions with his peers, and reconfigure a broad swathe of American vanguard culture so that the imbrication of these artists’ practices in structures of power stands newly revealed.”—Lynne Cooke, curator, Dia Art Foundation