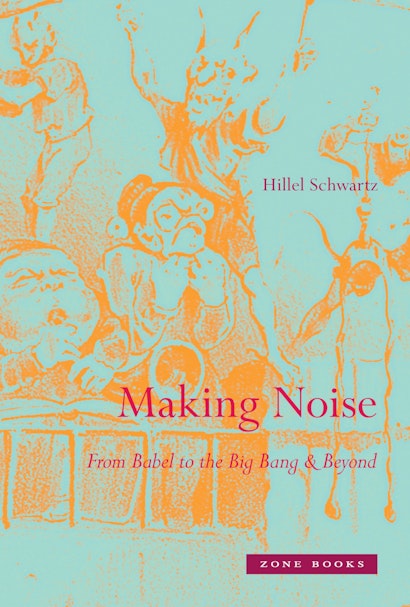 When did the “silent deeps” become cacophonous and galaxies begin to swim in a sea of cosmic noise? Why do we think that noises have colors and that colors can be loud? How loud is too loud, and says who? Attending to sounds at once physical and political, Hillel Schwartz listens across millennia for a trajectory of changes in the Western experience and understanding of noise.

From the uproarious junior gods of Babylonian epic to crying infants heard over baby monitors, from doubly-mythic Echo to loudspeaker feedback, Making Noise follows “unwanted sound” on its path through terrains domestic and industrial, legal and religious, musical and medical, poetic and scientific. At every stage of this tour de force, crafted in the inimitable prose of one of America’s most innovative cultural historians, Schwartz widens and deepens our sense of the reverberations of soundful lives, urban, suburban, rural, or lost. Never so much a question of the intensity of sounds as of the intensity of relationships, the continual redefinition of noise is a sensitive register of contending generations, classes, and genders.

Drawing upon the archives of children’s authors and anti-noise activists, catalogs of fireworks and dental drills, letters of worried parents and marine biologists, Making Noise traces the process by which noise has become as potently metaphorical as the original Babel. In astrophysics as in fiction, in economics as in art, noise is no longer bound to acoustic experience. Following the visuals of his Culture of the Copy, Hillel Schwartz has spent two decades listening in to that which, literally and figuratively, makes a perfect copy impossible — those booms, hisses, and rasps that are at once the burden and token of our shared humanity. Unprecedented in its scope, this book will transform sound studies and contemporary assessments of cacophonies loud or uncomfortably quiet.

"An explosion of a book … all facets of life come alive with sounds good, bad, and ugly … readable and absorbing in both sweep and detail."—Times Higher Education

"Schwartz is a writer’s writer, meaning that he is a sublime stylist, can turn a phrase you’ll never forget and knows he is being read by, inter alia, other writers."—RealTime

“Never has so much clarity accompanied so much noise. Hillel Schwartz, a scholar’s scholar channeled by a sagacious and gracious poet, has taken noise from boing to being, from abstractions imposed upon the seemingly insignificant, chaotic, and unruly to a dynamic centrality of actual lives lived and imagined, of physical and political forces. To the extent that noise is audible, Making Noise is the greatest achievement yet produced in the scholarship on sound and listening. To the extent that noise is so much more, Schwartz is the Humboldt of a disorderly Cosmos.”— Douglas Kahn, author of Noise, Water, Meat: A History of Sound in the Arts

“The society that wishes to move the fastest — not necessarily the most expeditiously — must assimilate enormous quantities of information and sort it out at lightning speed. Along with useful information comes disinformation — human, mechanical, and random error. The brain sorts through this data constantly at large cost. A state of tensile strength at extreme pressure requires only one small cut in the wire to boomerang. Philosopher, cyclist, and innovator in the case management of the acutely ill, Hillel Schwartz has spent twenty years researching the exponentiating phenomenon of ‘noise.’ With unparalleled research, he explores every parameter of this term and its effect upon psyche and physiology. Noise blasts a human being into infinity and he lands in an iron chair without a nametag, an overwounded fleshmachine melted down into an unrecognizable form.”— Diamanda Galás, composer, vocalist, and performance artist

“We might easily imagine that noise doesn’t have a history, that it’s just, well, sound. But Making Noise reveals that a shifting soundtrack to human life has been an inevitable consequence of social change. New social arrangements and new technologies lead, not just to new sounds, but to new ideas about which sounds are normal, necessary, or pleasant, and which are noxious or dangerous. Hillel Schwartz draws upon an extraordinary range of sources to tell the story of noise with great style and wit. Listen up!”— Joel Best, author of Everyone’s a Winner: Life in Our Congratulatory Culture

“Think of Hillel Schwartz’s tome as The Book of Noise: not just a, but the history of the hum and thrum of the world. It arrives as if from a dream, a materialization of one of Borges’s imaginary and impossible volumes, a book that contains all creation—and all its clattering contradictions besides. Schwartz takes readers past the swerves of science to the ends of art, tracking how noise has become the elemental apparatus of the universe as well as the troubled twin to sense and sentiment. Making Noise resounds and astounds.”— Stefan Helmreich, author of Alien Ocean: Anthropological Voyages in Microbial Seas