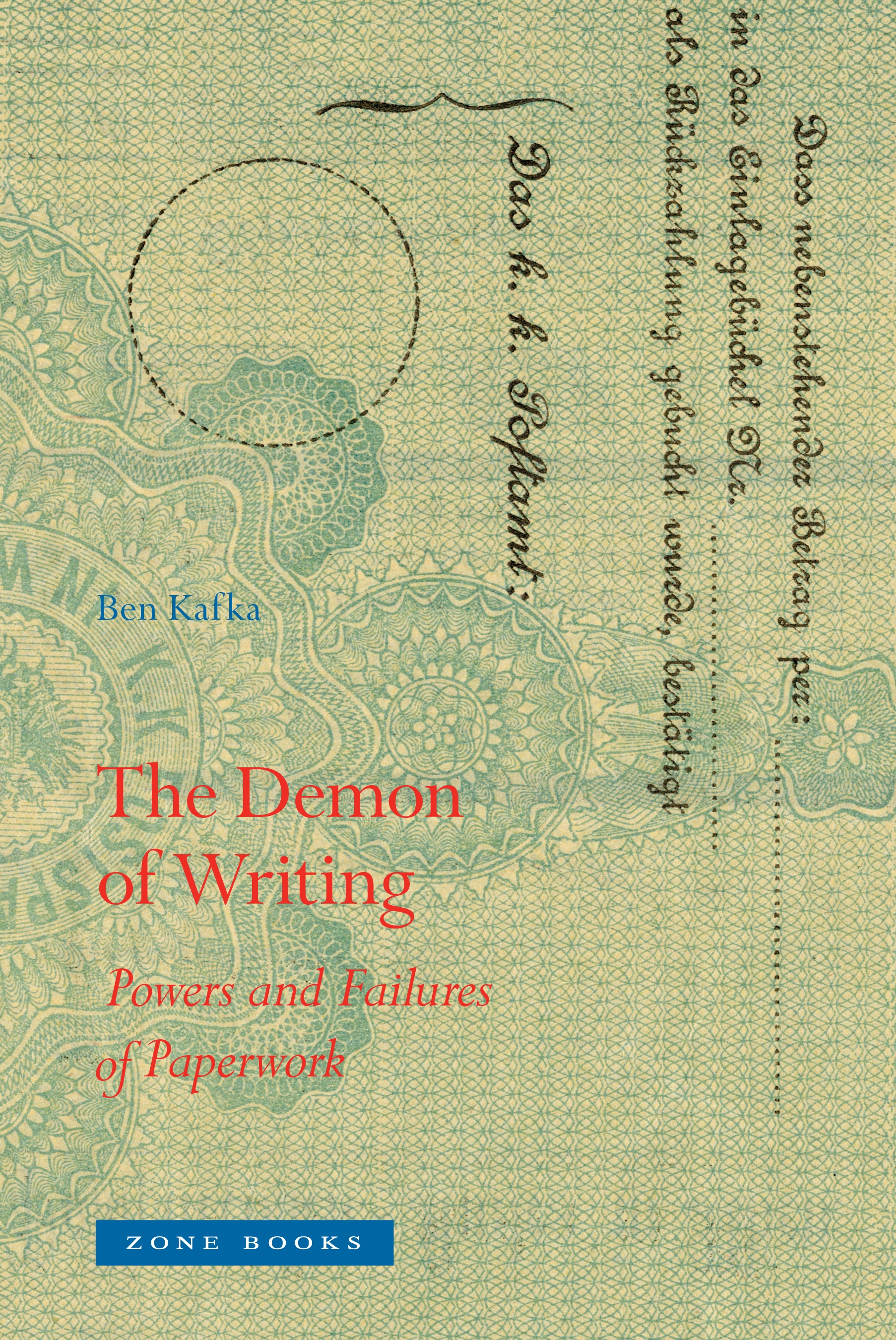 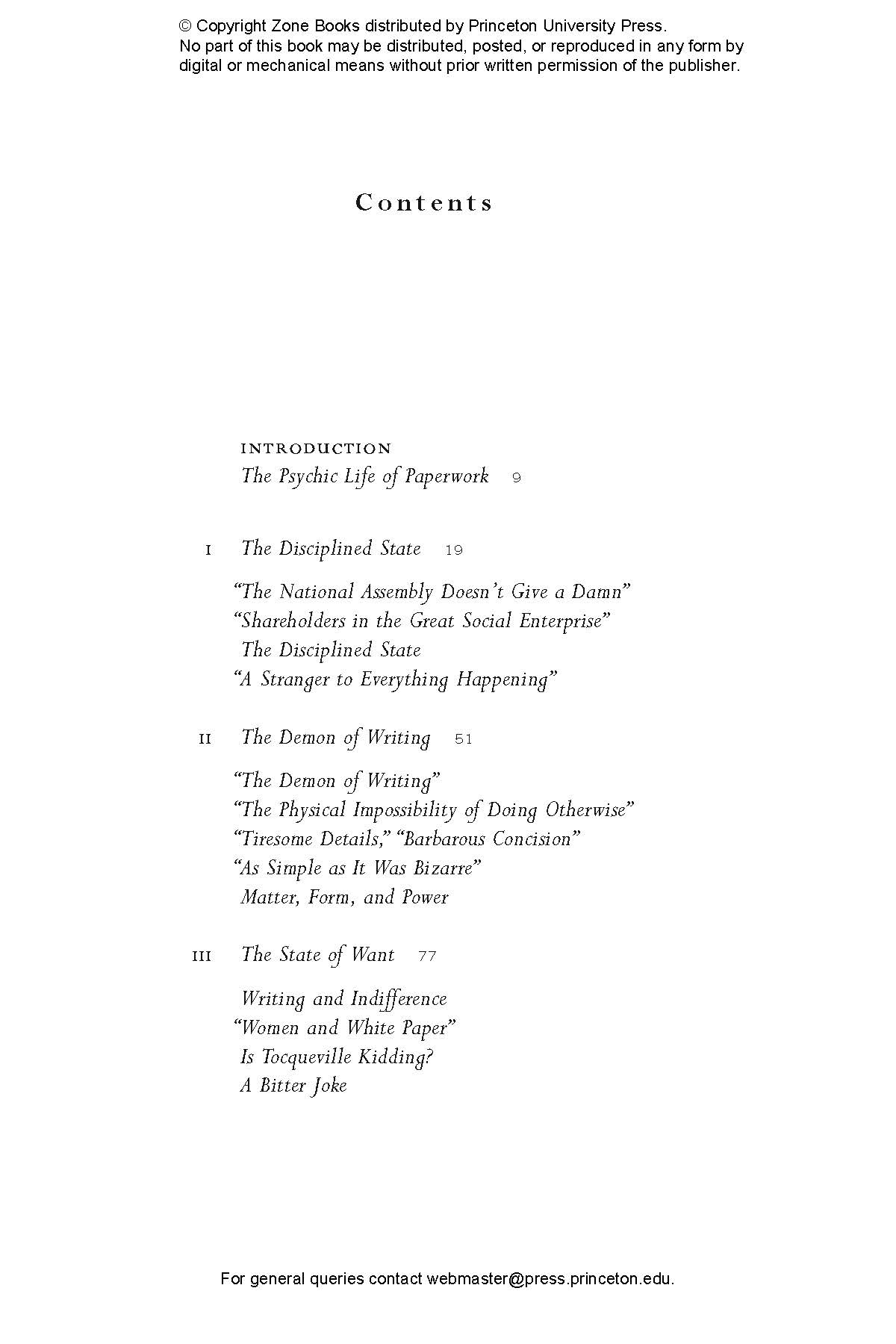 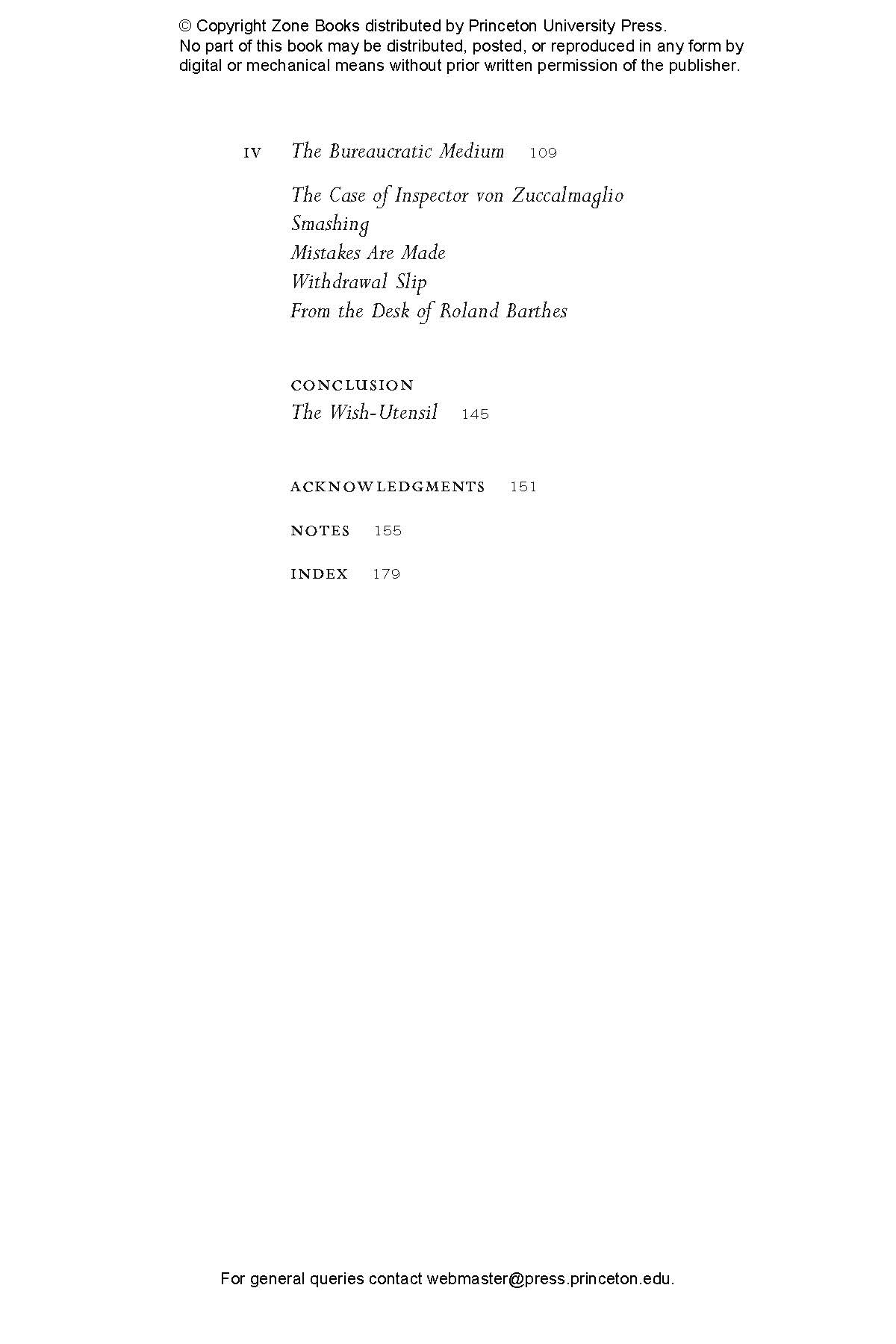 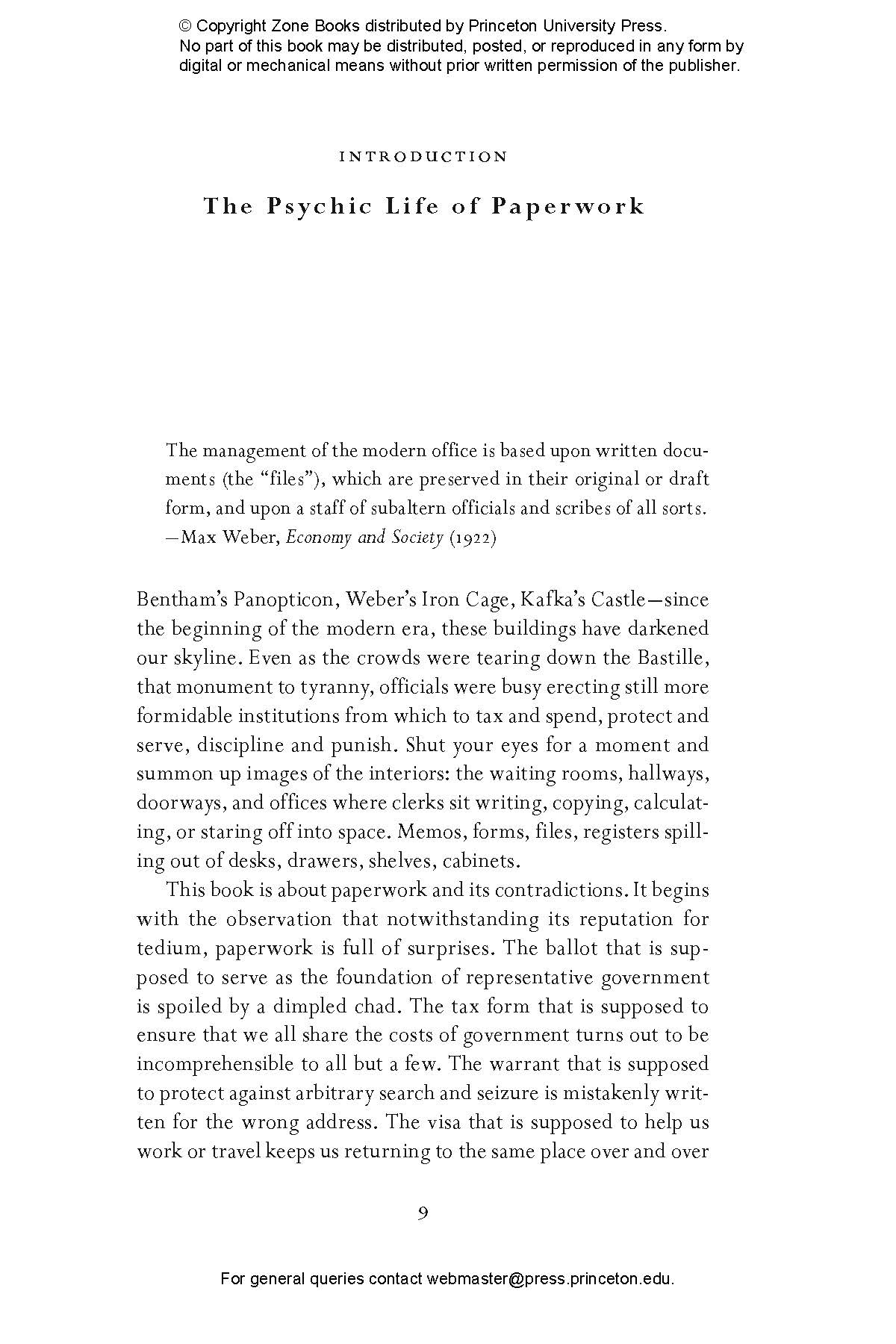 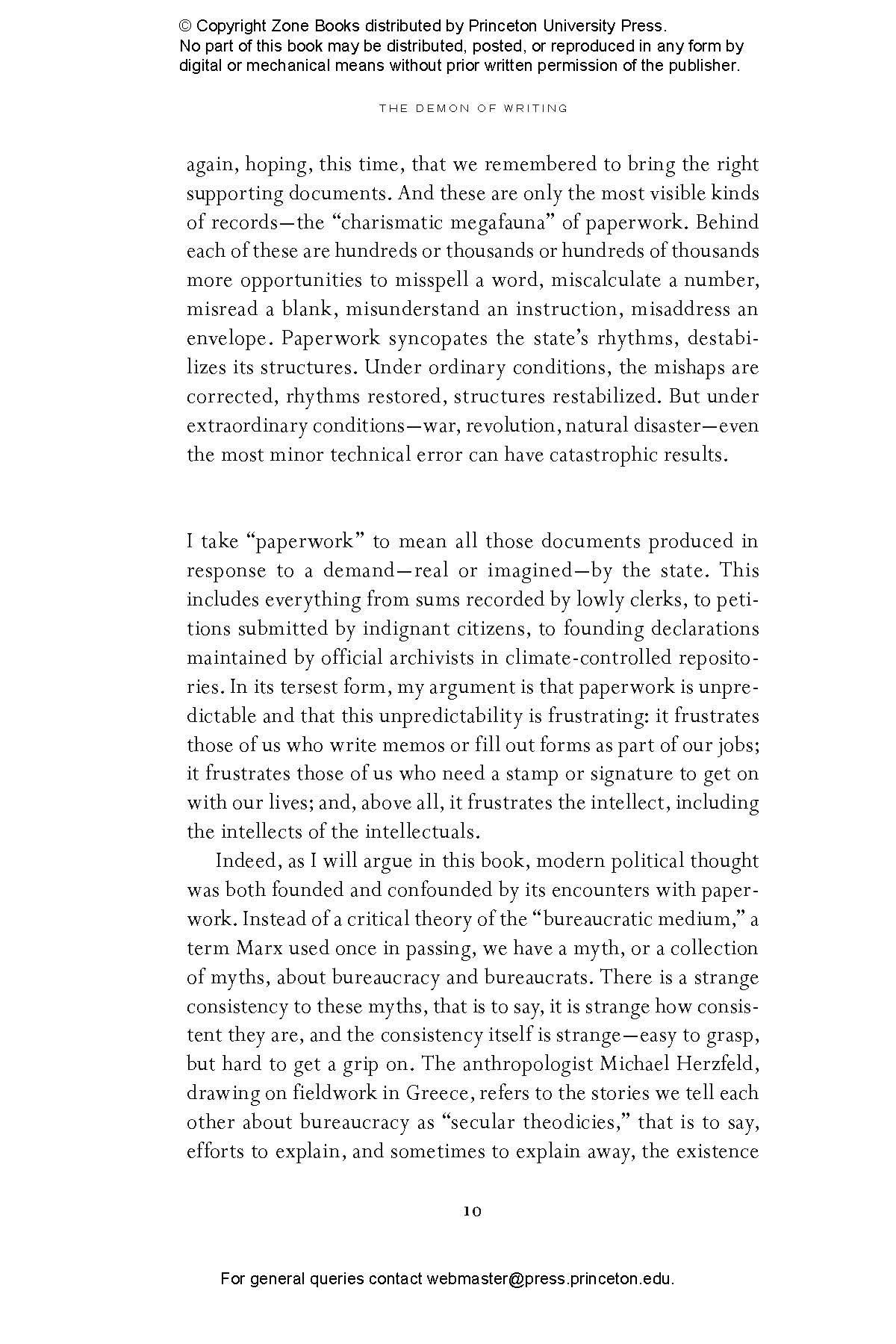 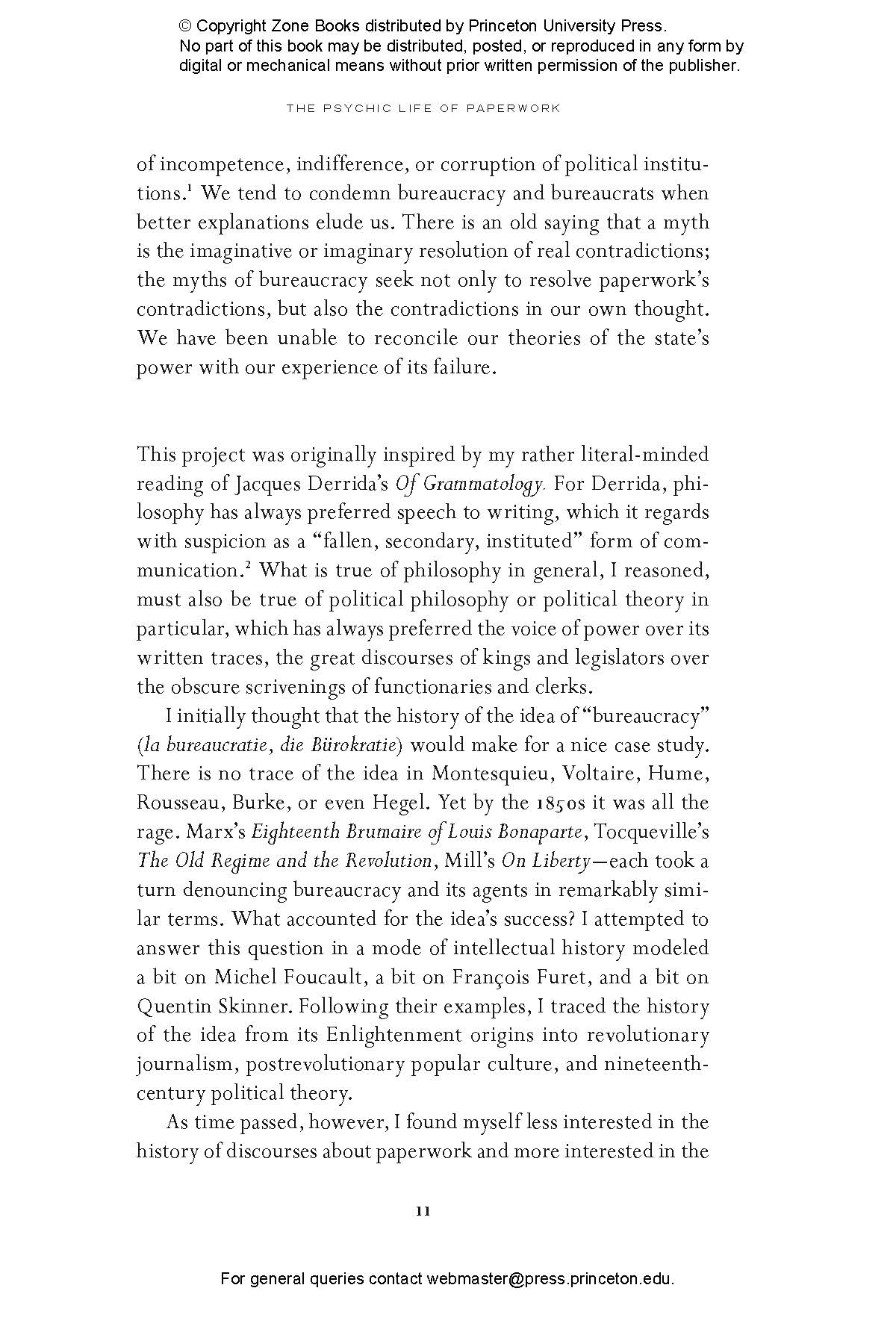 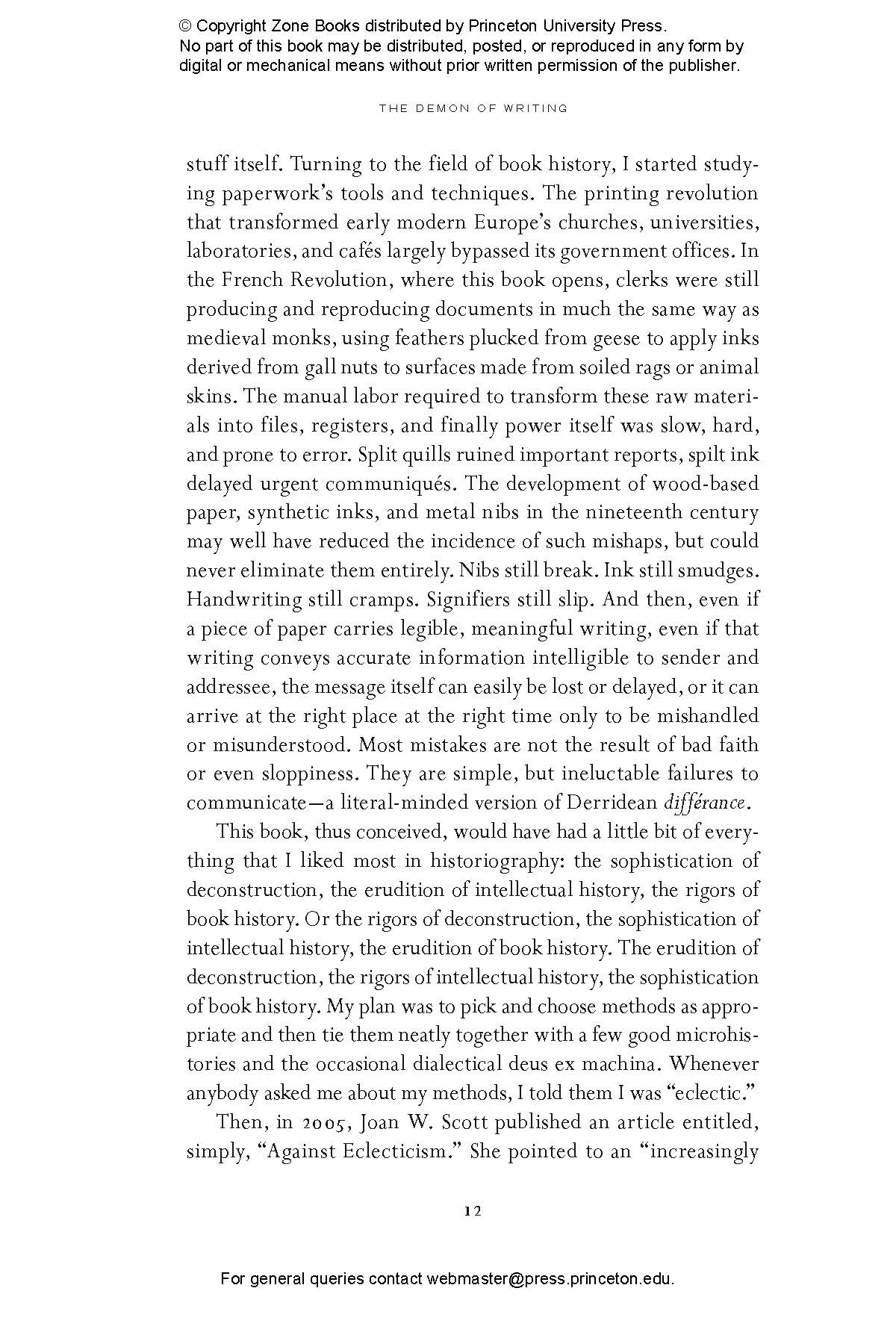 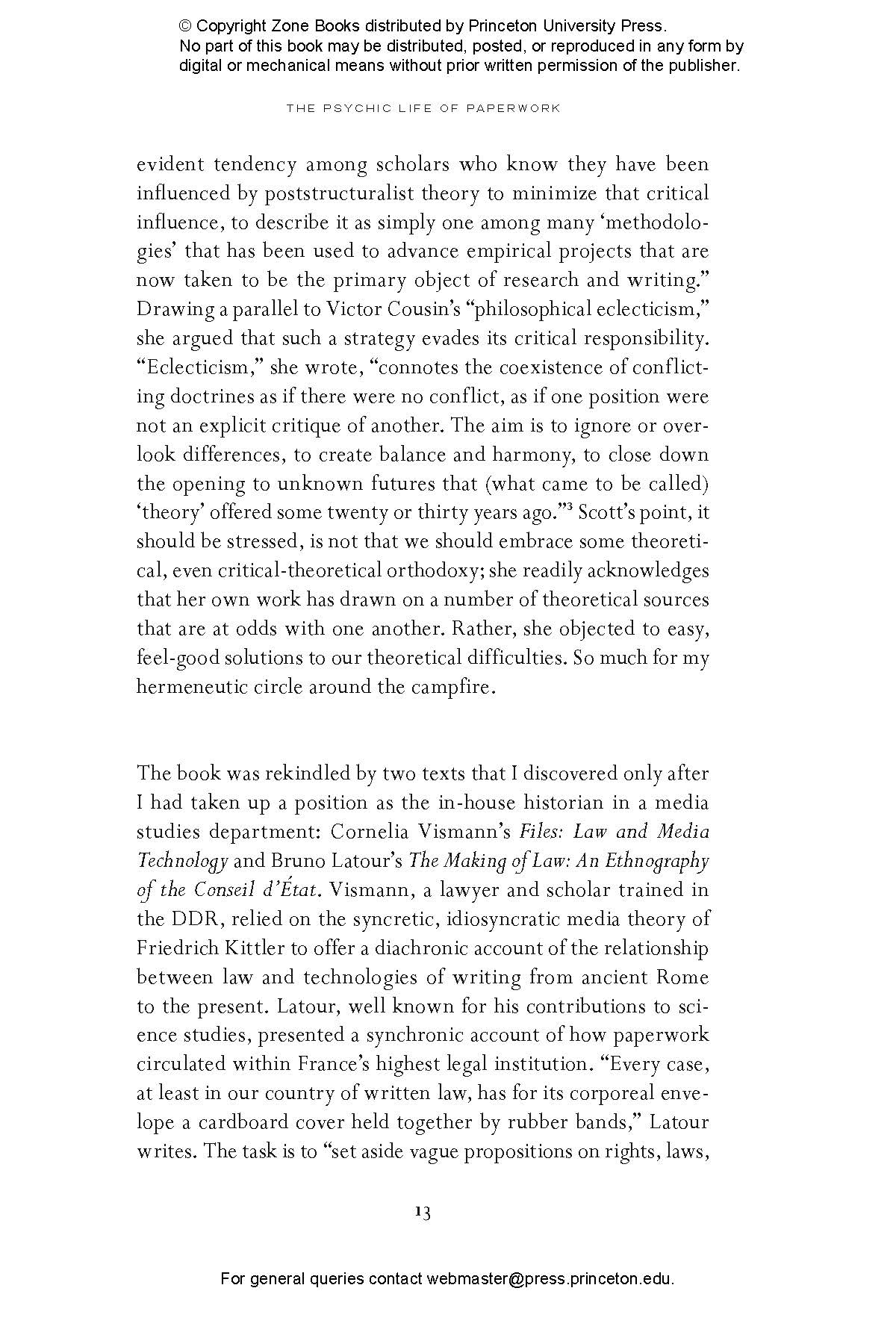 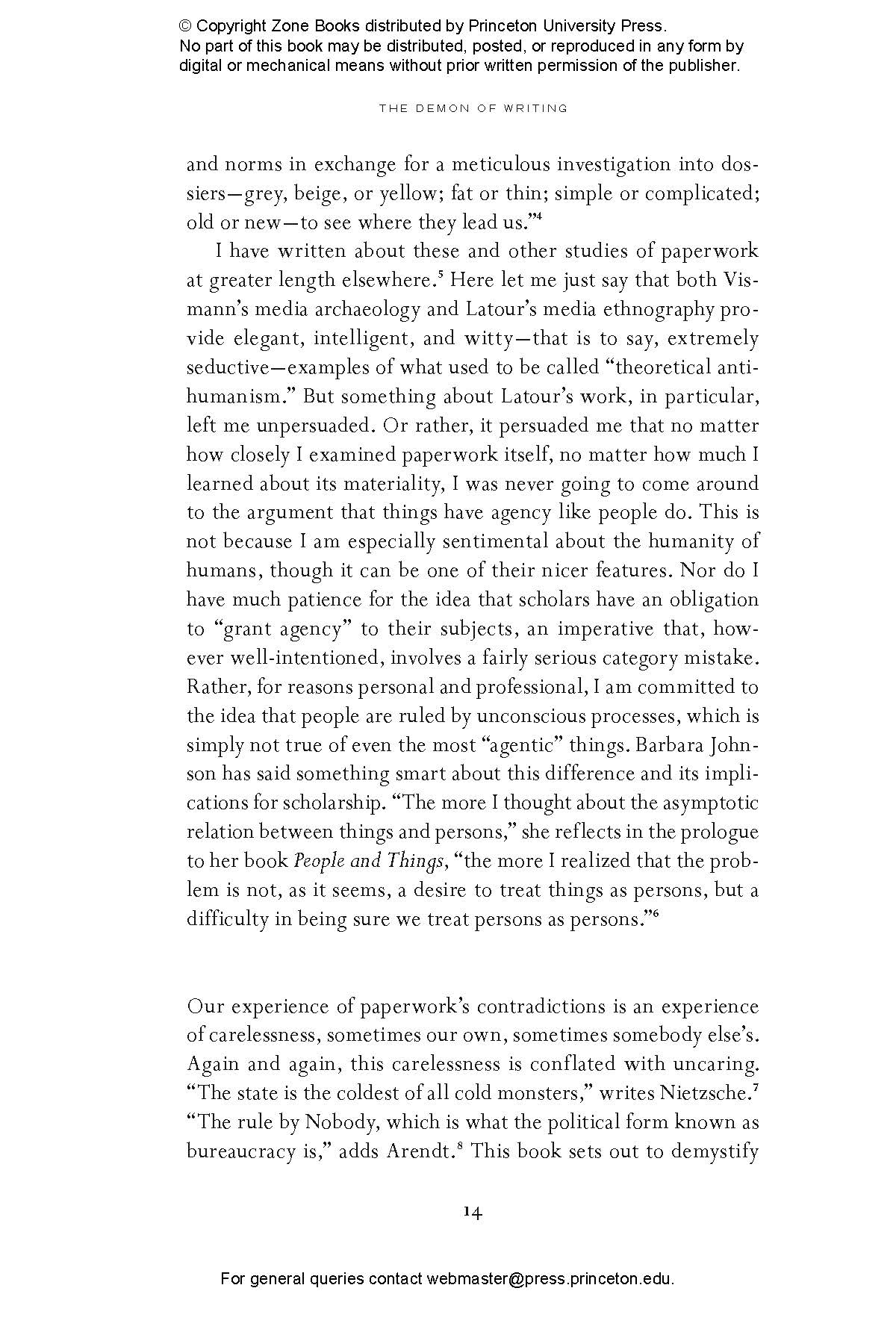 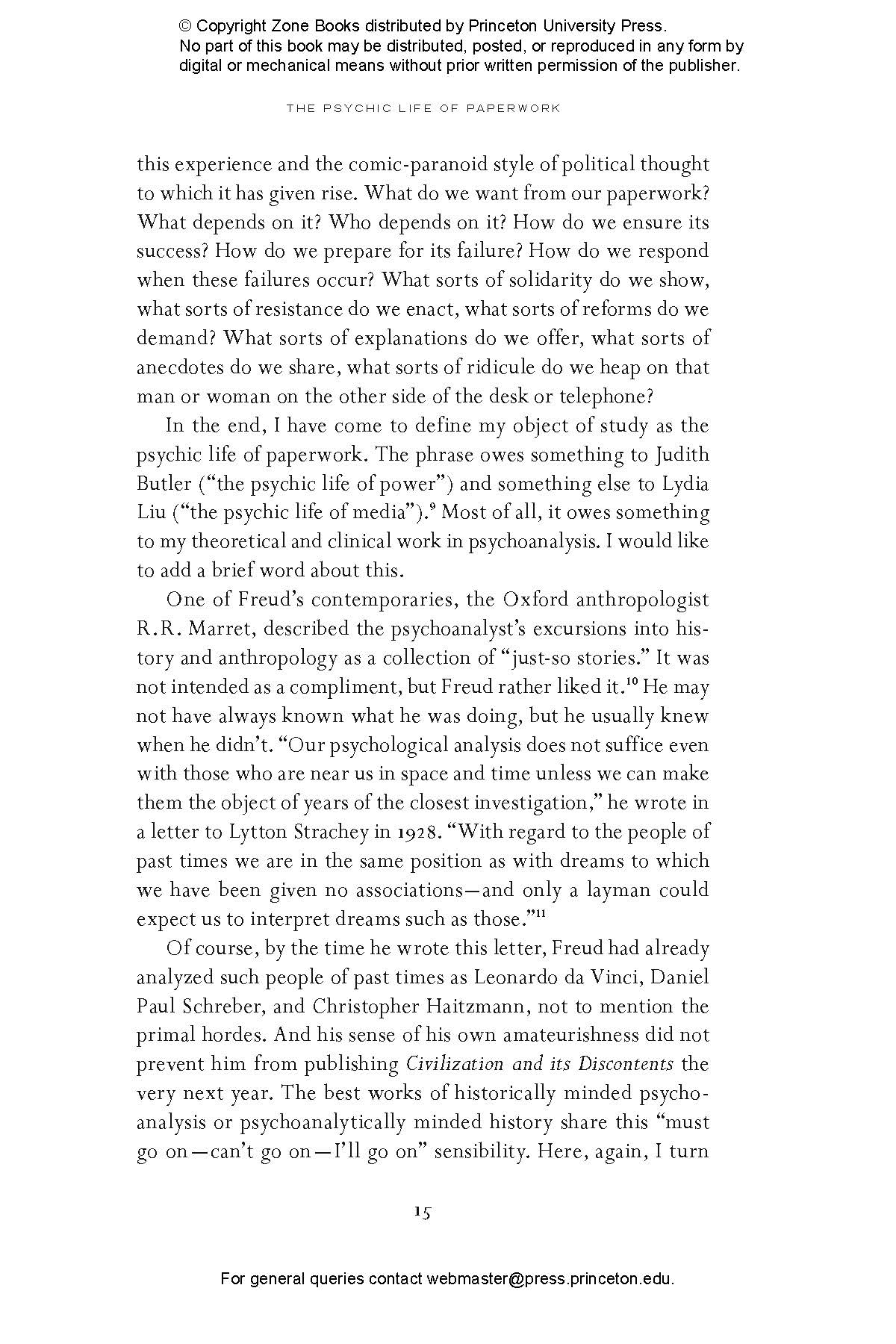 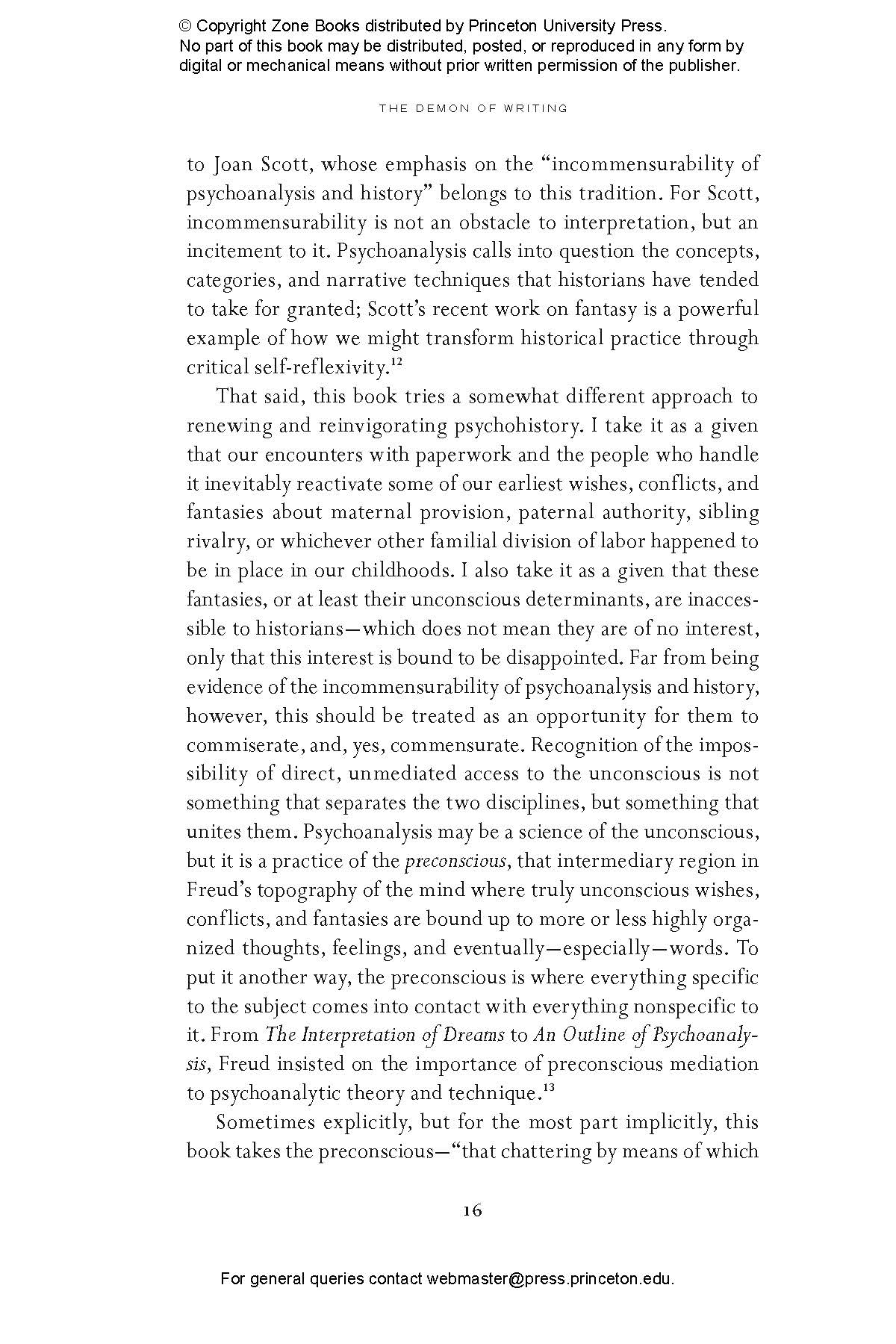 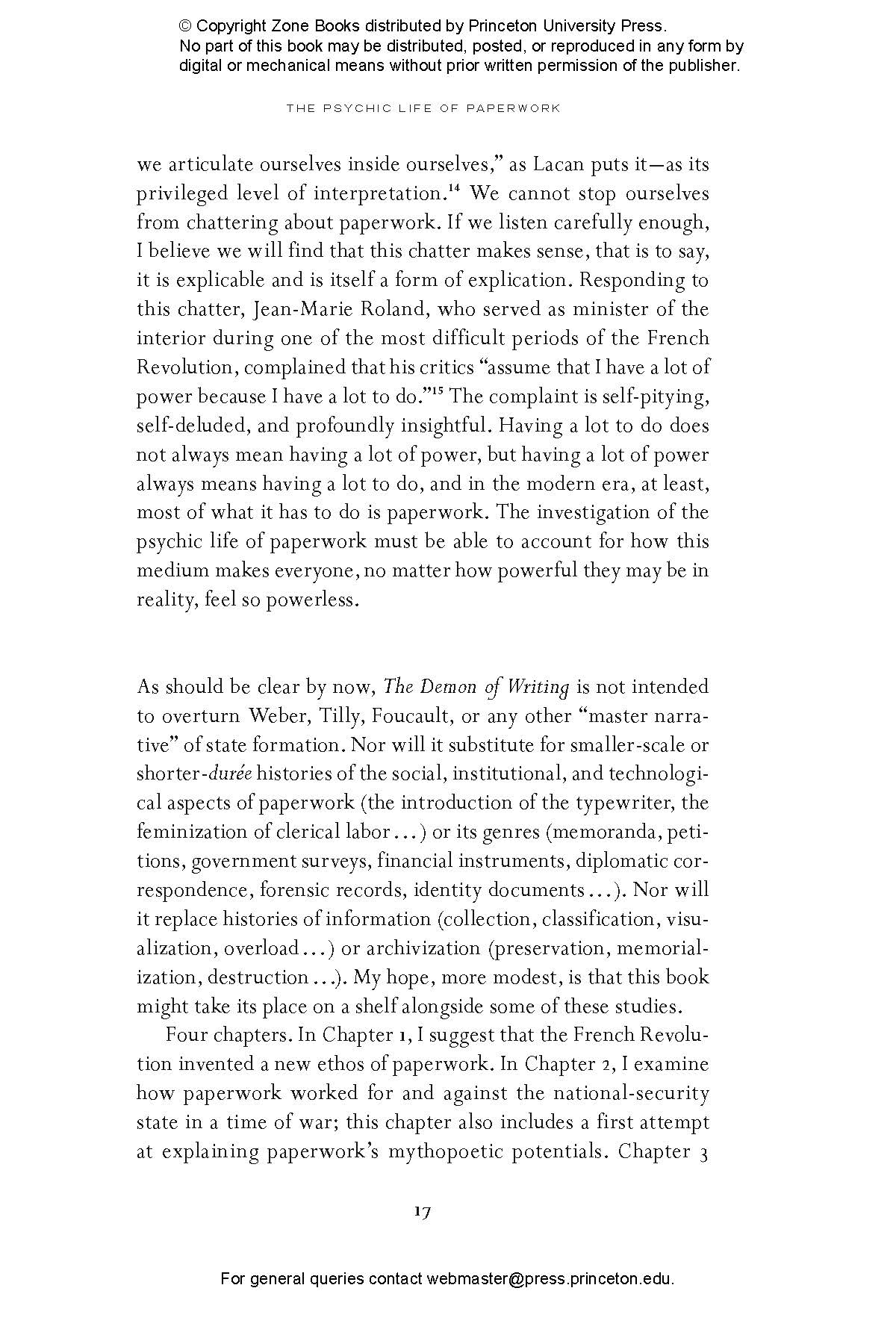 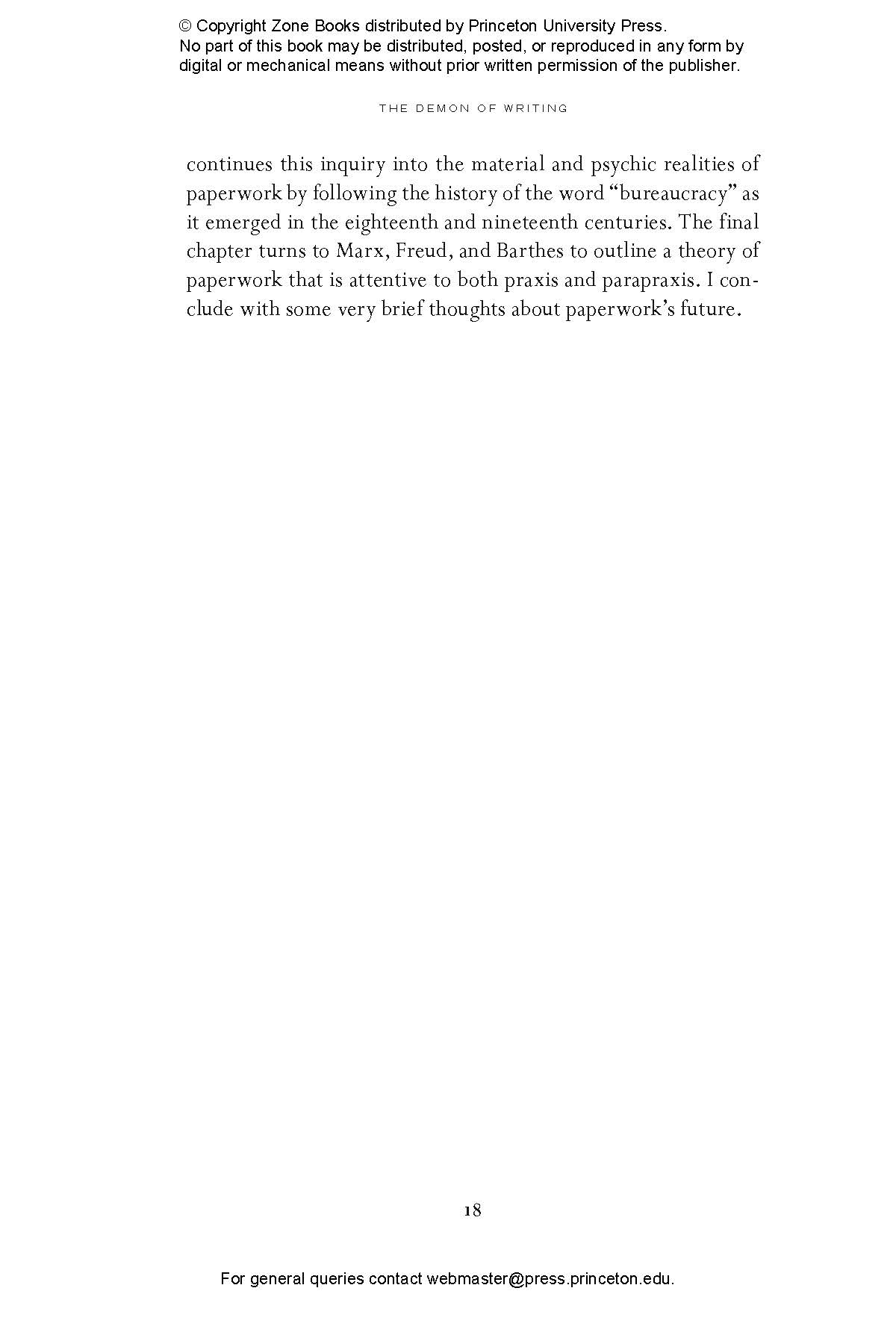 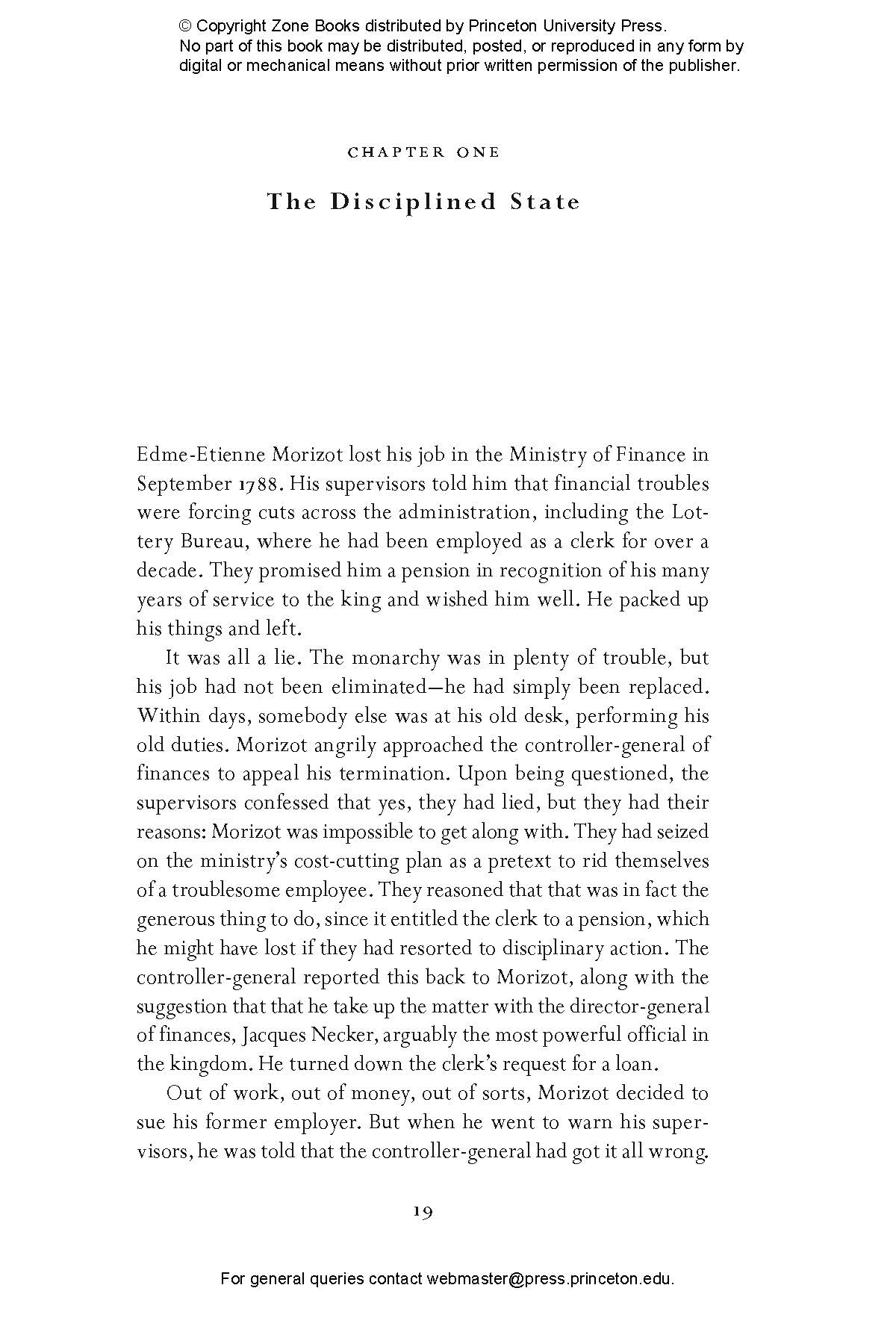 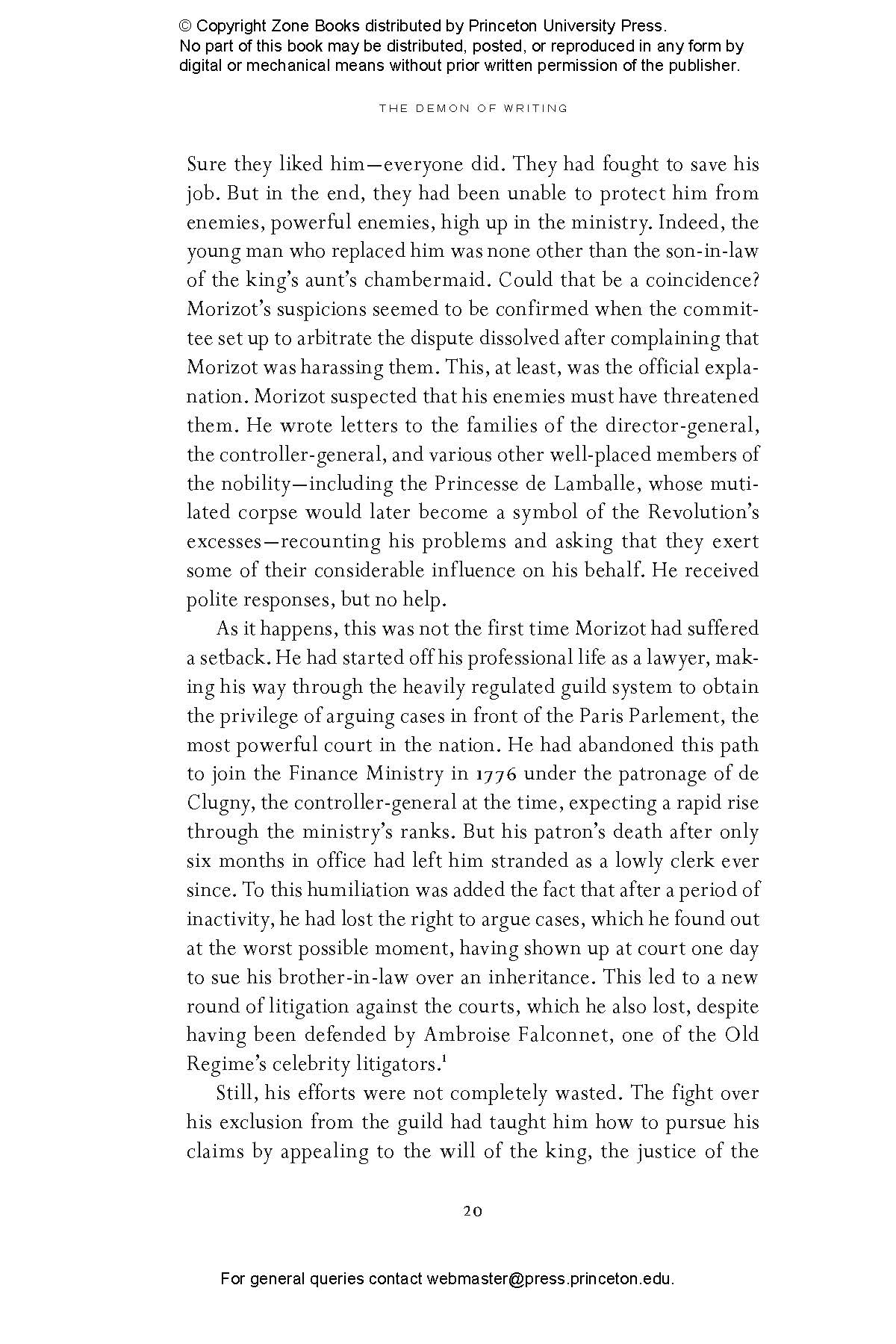 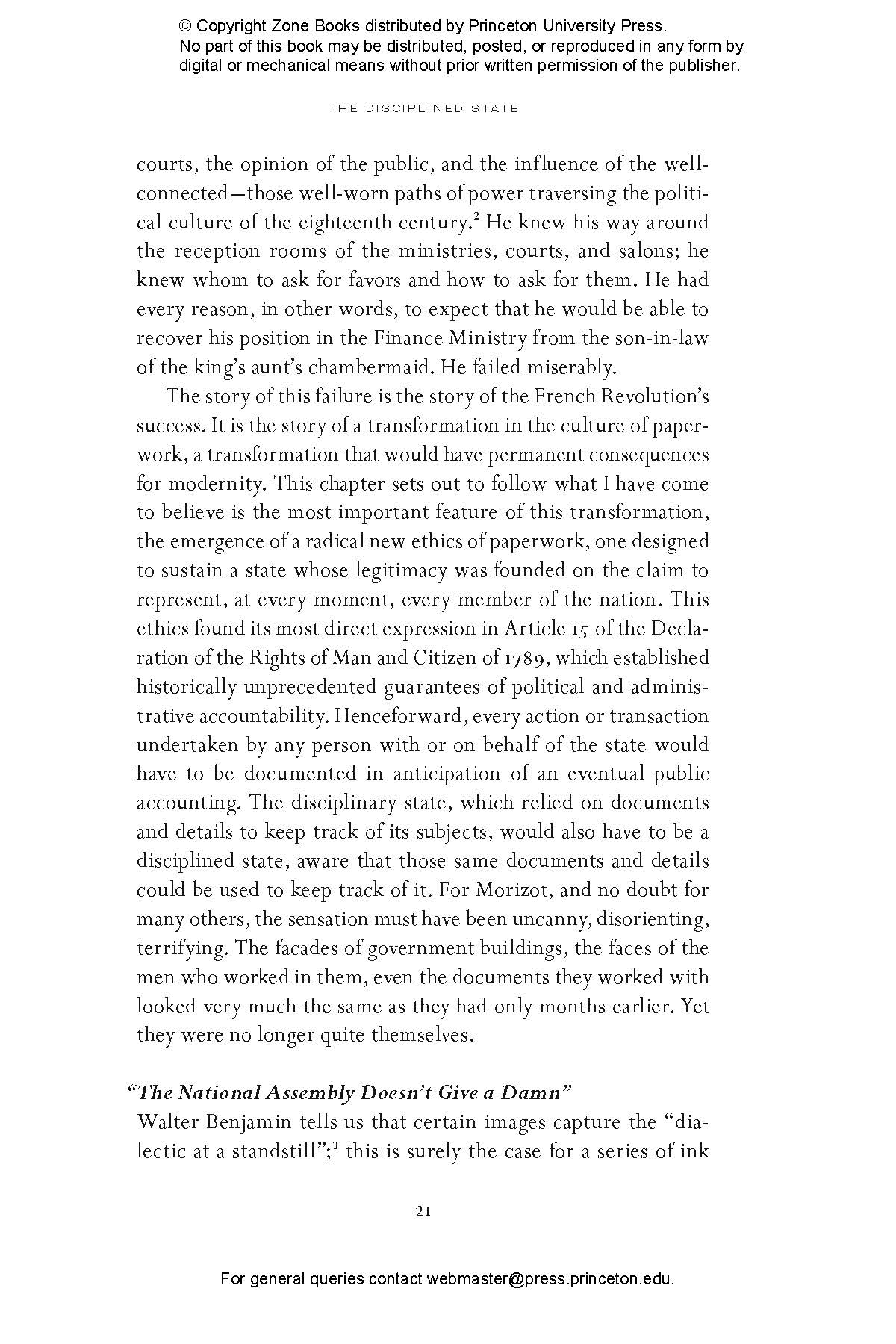 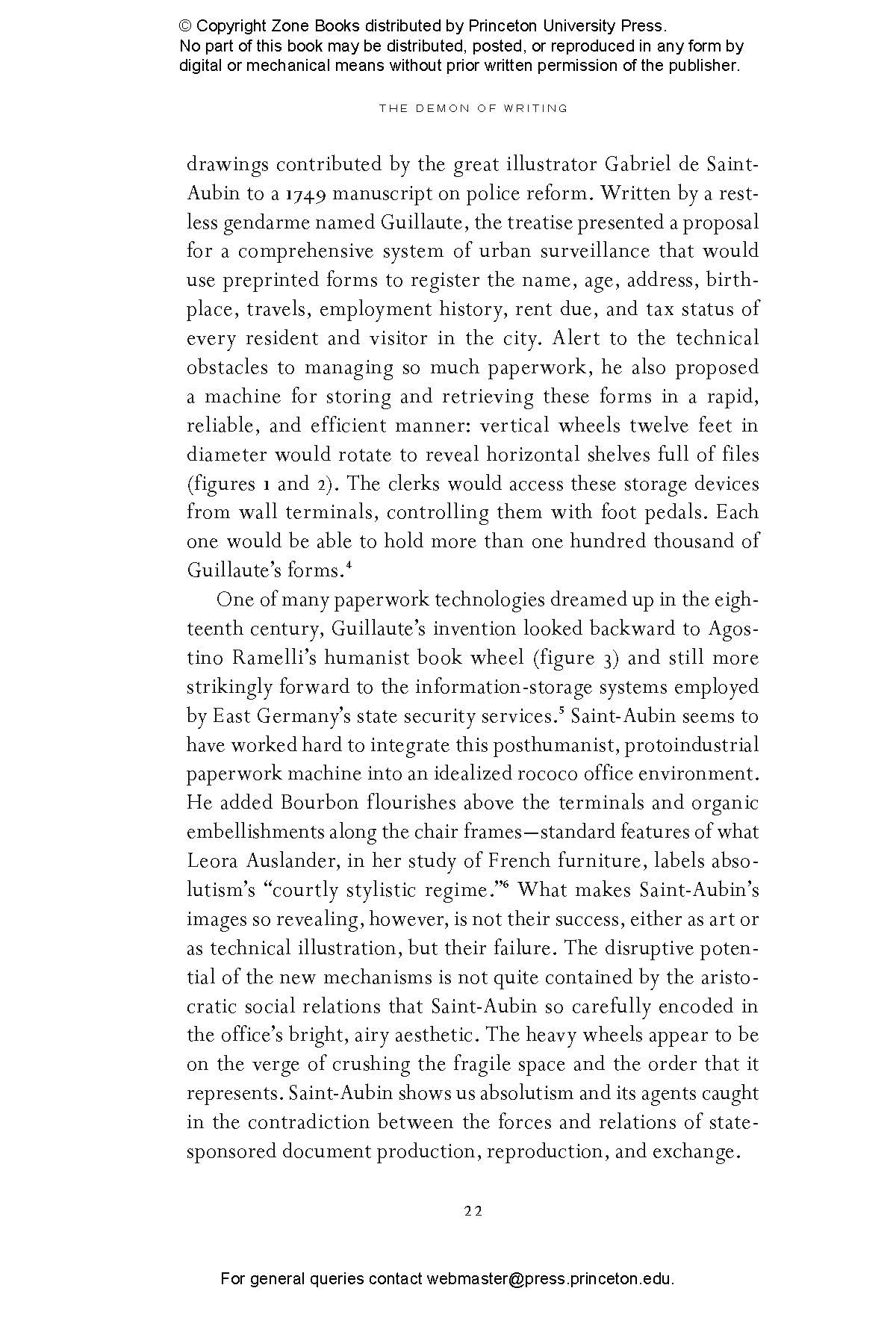 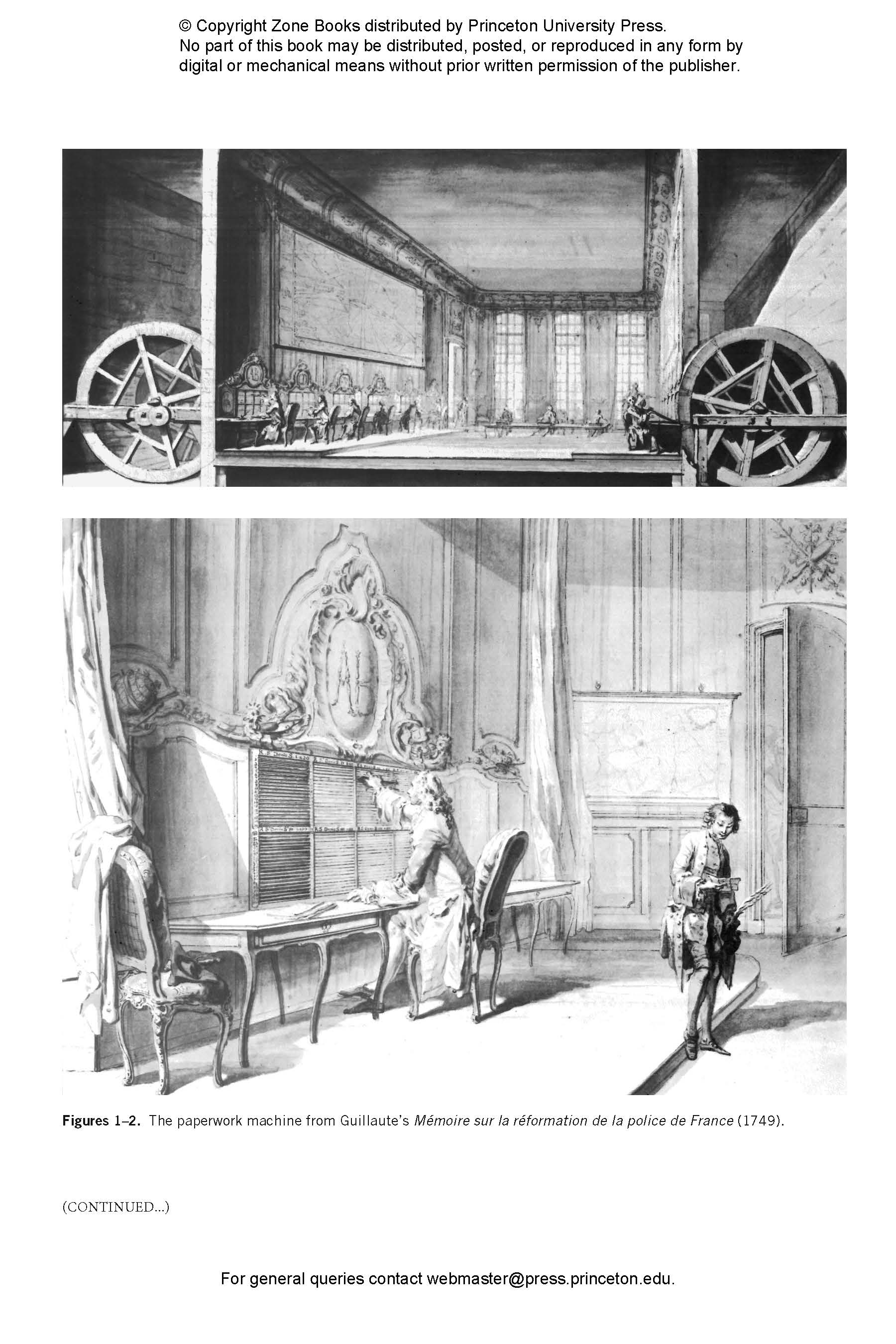 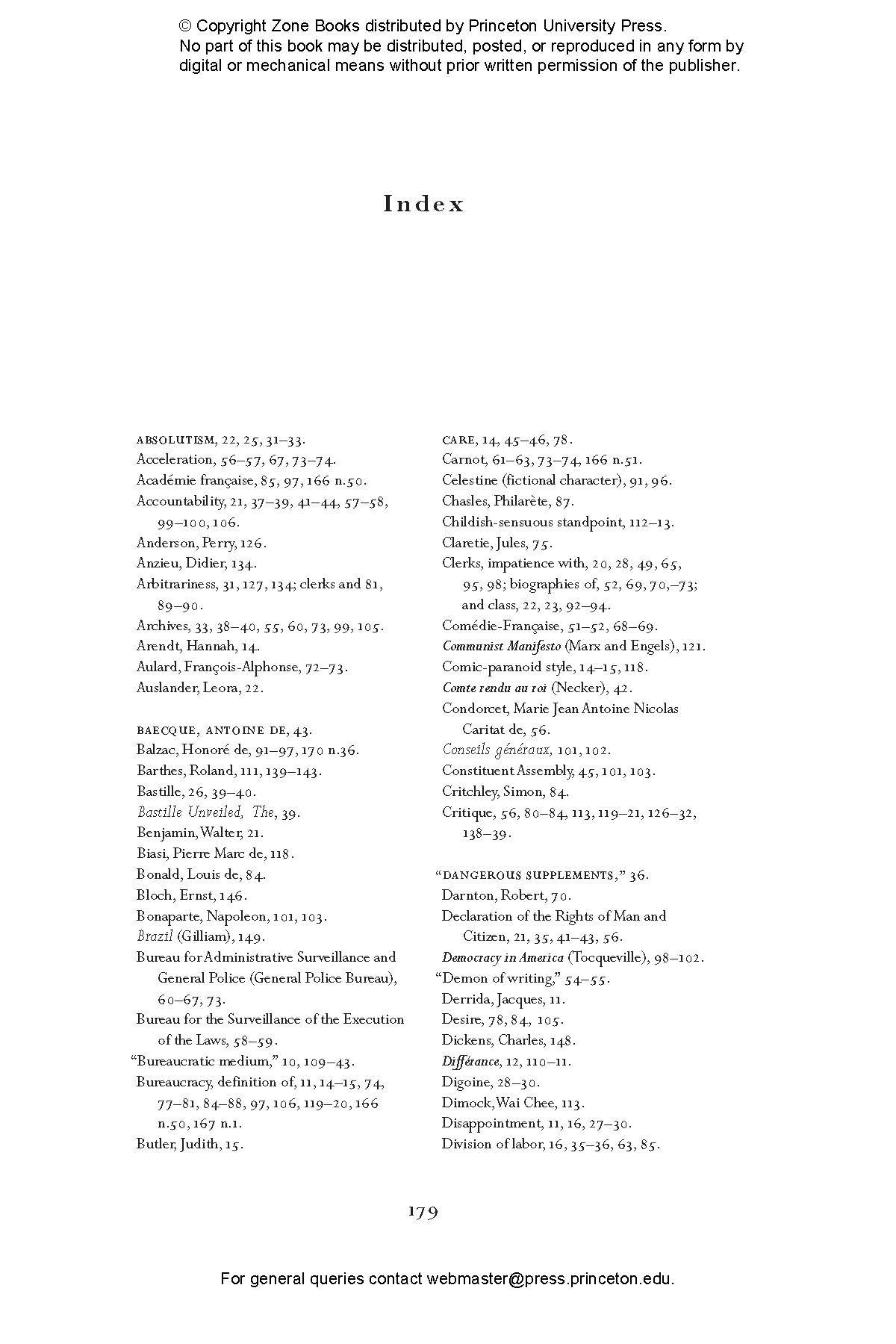 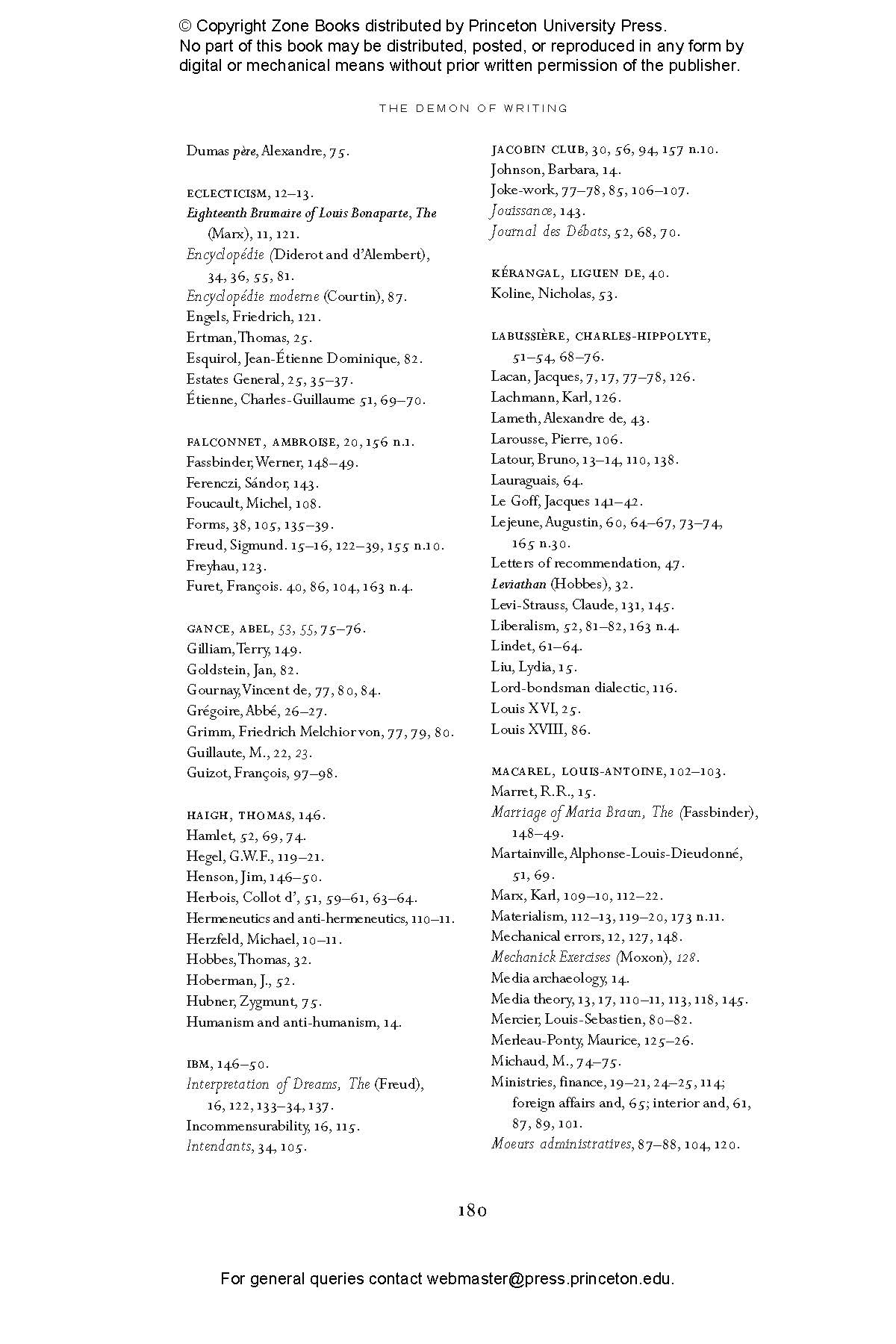 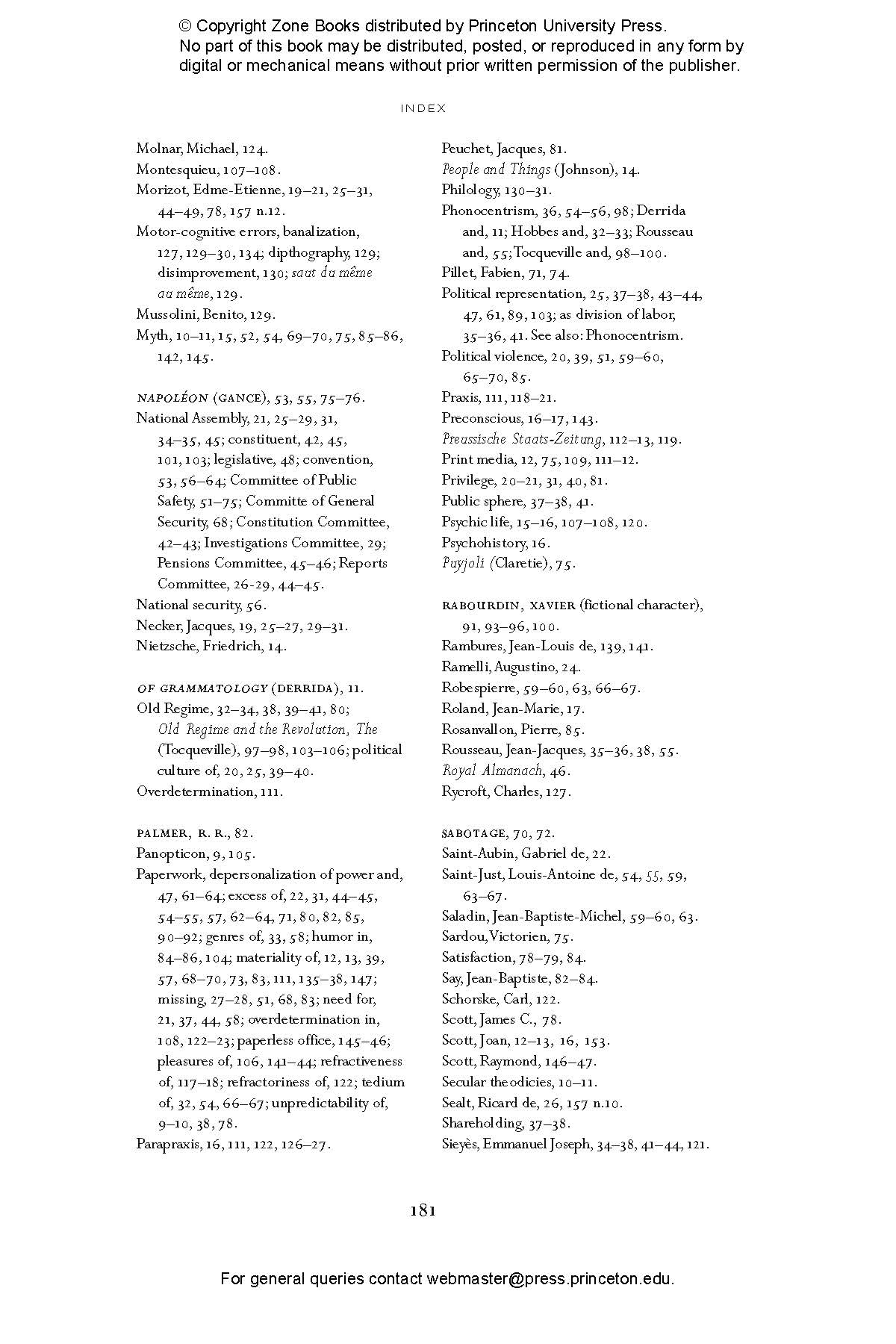 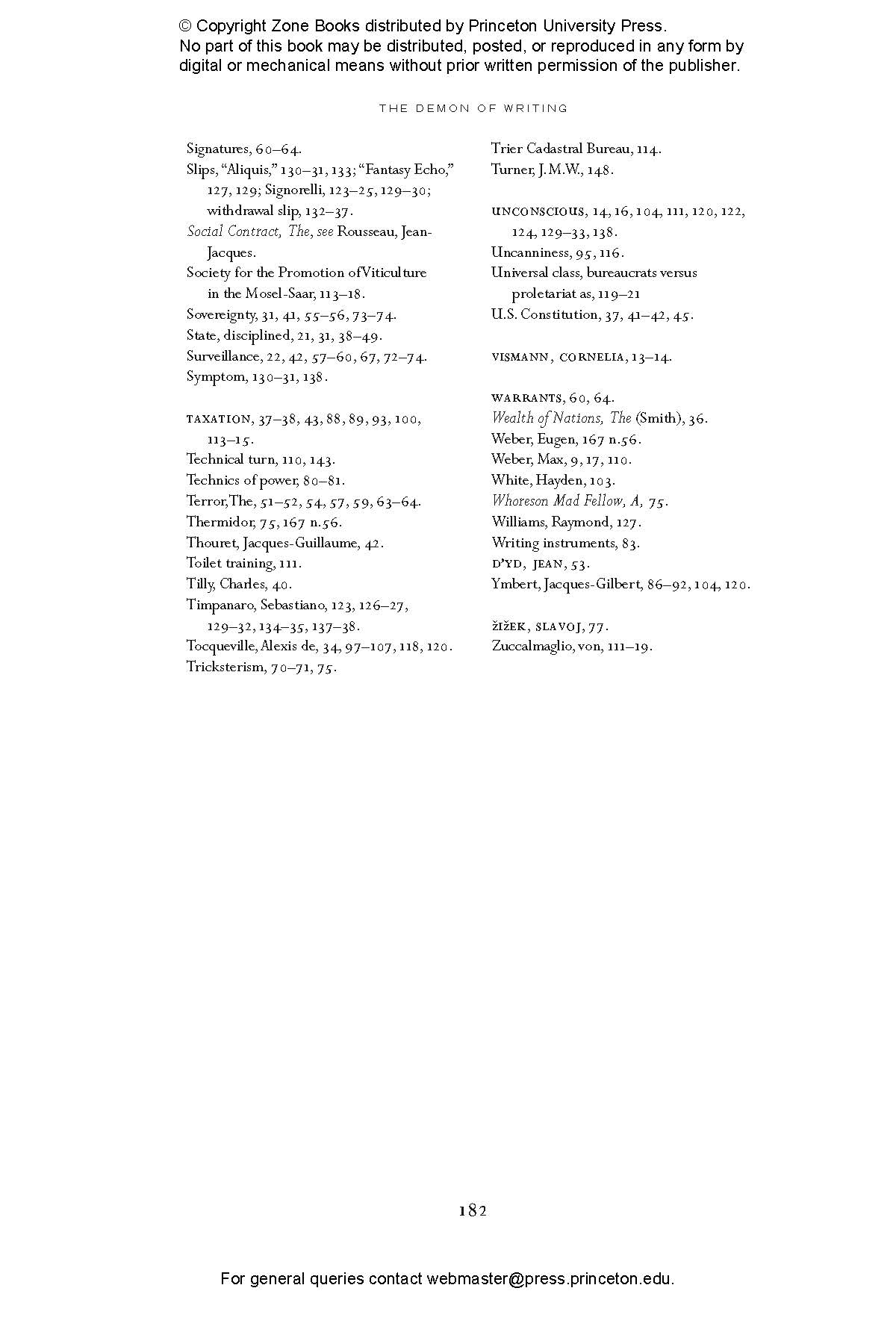 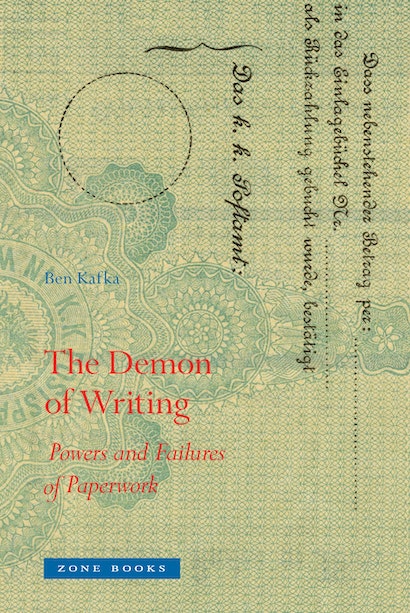 Since the middle of the eighteenth century, political thinkers of all kinds — radical and reactionary, professional and amateur — have been complaining about “bureaucracy.” But what, exactly, is all this complaining about?

The Demon of Writing is a critical history and theory of one of the most ubiquitous, least understood forms of media: paperwork. States rely on records to tax and spend, protect and serve, discipline and punish. But time and again this paperwork proves to be unreliable. Examining episodes from the story of a clerk who lost his job and then his mind in the French Revolution to Roland Barthes’s brief stint as a university administrator, the book reveals the powers, failures, and even pleasures of paperwork. Many of its complexities, the book argues, have been obscured by the comic-paranoid style that characterizes so many of our criticisms of bureaucracy. At the same time, the book outlines a new theory of what Marx called the “bureaucratic medium.” Returning first to Marx, then to Freud, The Demon of Writing argues that this theory of paperwork must be attentive to both praxis and parapraxis.

"Kafka’s book is a keen, vivacious examination of the frustrating ‘unpredictability’ of paperwork as a cultural institution."—Publishers Weekly

"Ben Kafka does the important job of reminding us that paperwork is part of the great human traditions, not only of communication and information, but also of revolution, existential philosophy, and for some, religion."—The New Republic

"Long after it has become normal for people to spend a significant chunk of their time writing memos, expense reports, applications, budgets, evaluations . . . most of this writing still doesn’t comfortably fit our ideas of what it means to work. [Kafka’s] book focuses on this centrality of paperwork—as well as the centrality of this discomfort—to our jobs, our lives, and, he argues, the history of our politics."—Los Angeles Review of Books

"Paperwork obstructs. Paperwork keeps you in limbo . . . . Ben Kafka, media theorist and professor at New York University, understands this . . . . [T]he ghosts of paperwork haunt every missed opportunity and unforeseen error in the attempt to fashion a structured, disciplined, and well-documented life."—Popmatters

"All archives are monuments to officialdom, more or less . . . . [T]hough the French Revolution may have given birth to celebrations of national sovereignty and Declarations of the Rights of Man, it also spawned a monster that in subsequent centuries would be presented as the insidious, all-pervasive foe of freedom-loving peoples everywhere: la bureaucratie."—Reviews in History

"A concise if eccentric intellectual history of people’s relationship with the paperwork that governs (and gums up) so many aspects of modern life."—The New York Times

"Let’s reject the knee-jerk assumption: Paperwork is not dull. Time consuming, vexing, and prone to error, yes; but, as chronicled by Ben Kafka, never dull."—Bookforum

"Kafka has assembled an excellent cast through which to retell the story of bureaucracy as reality."—Reviews in History