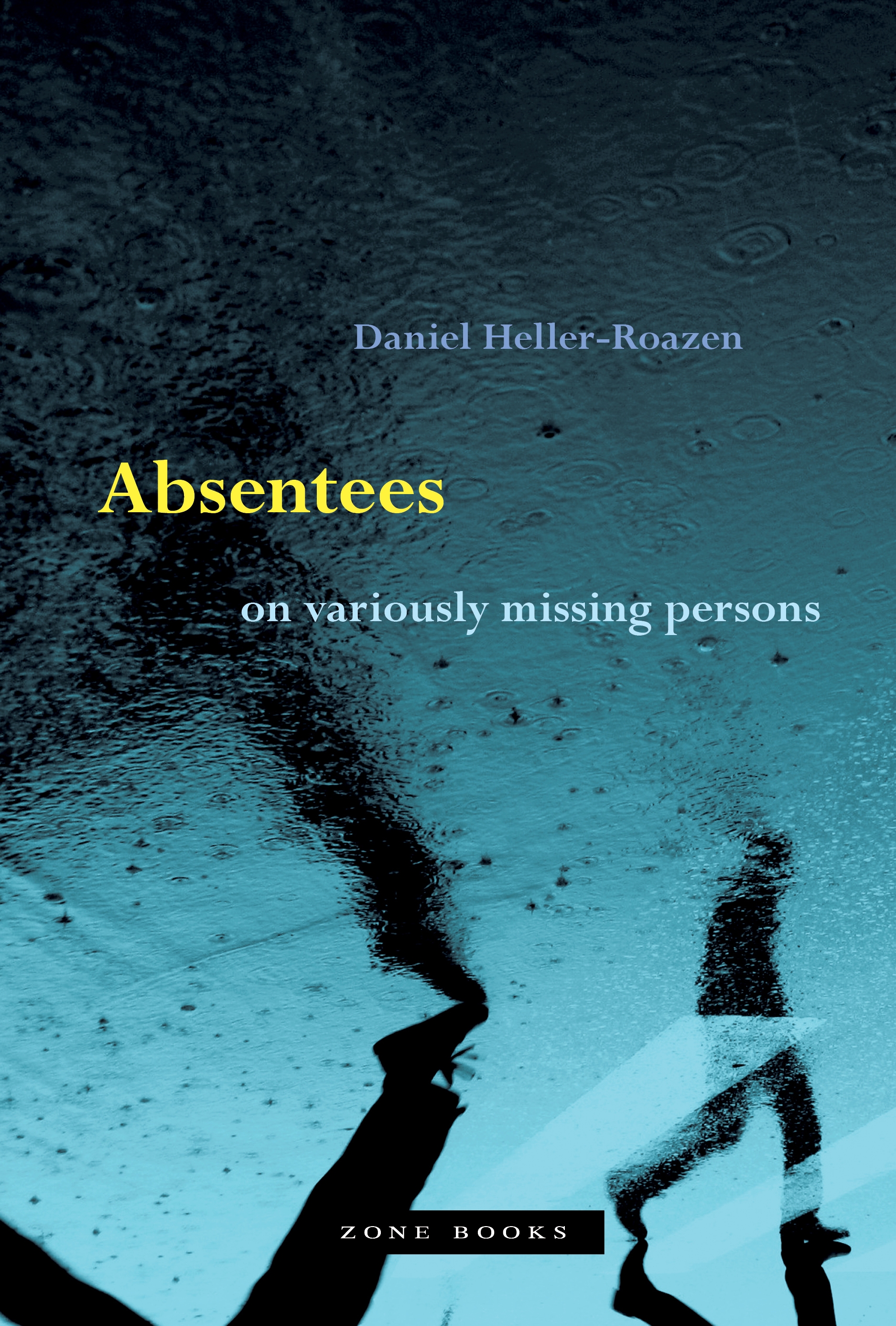 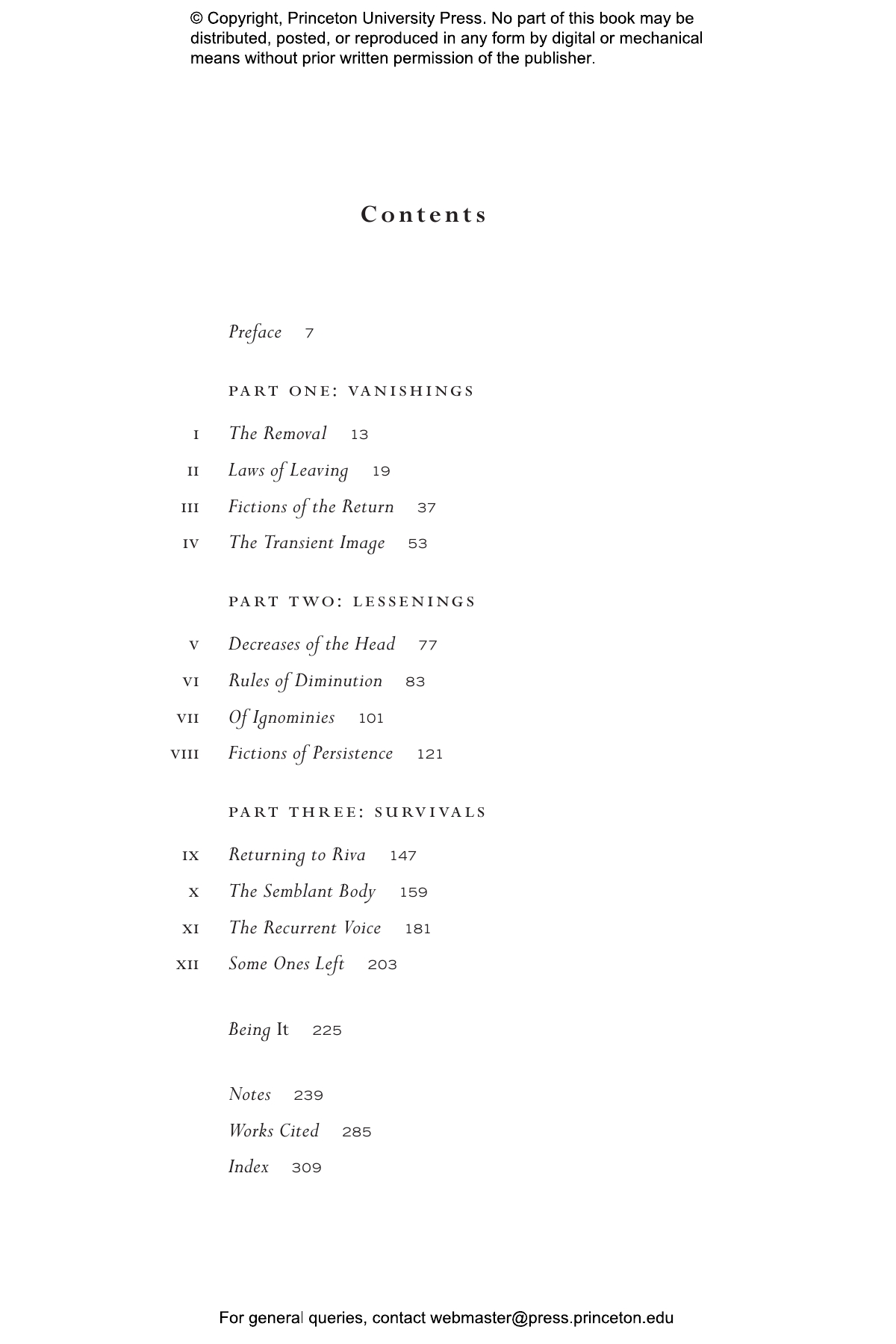 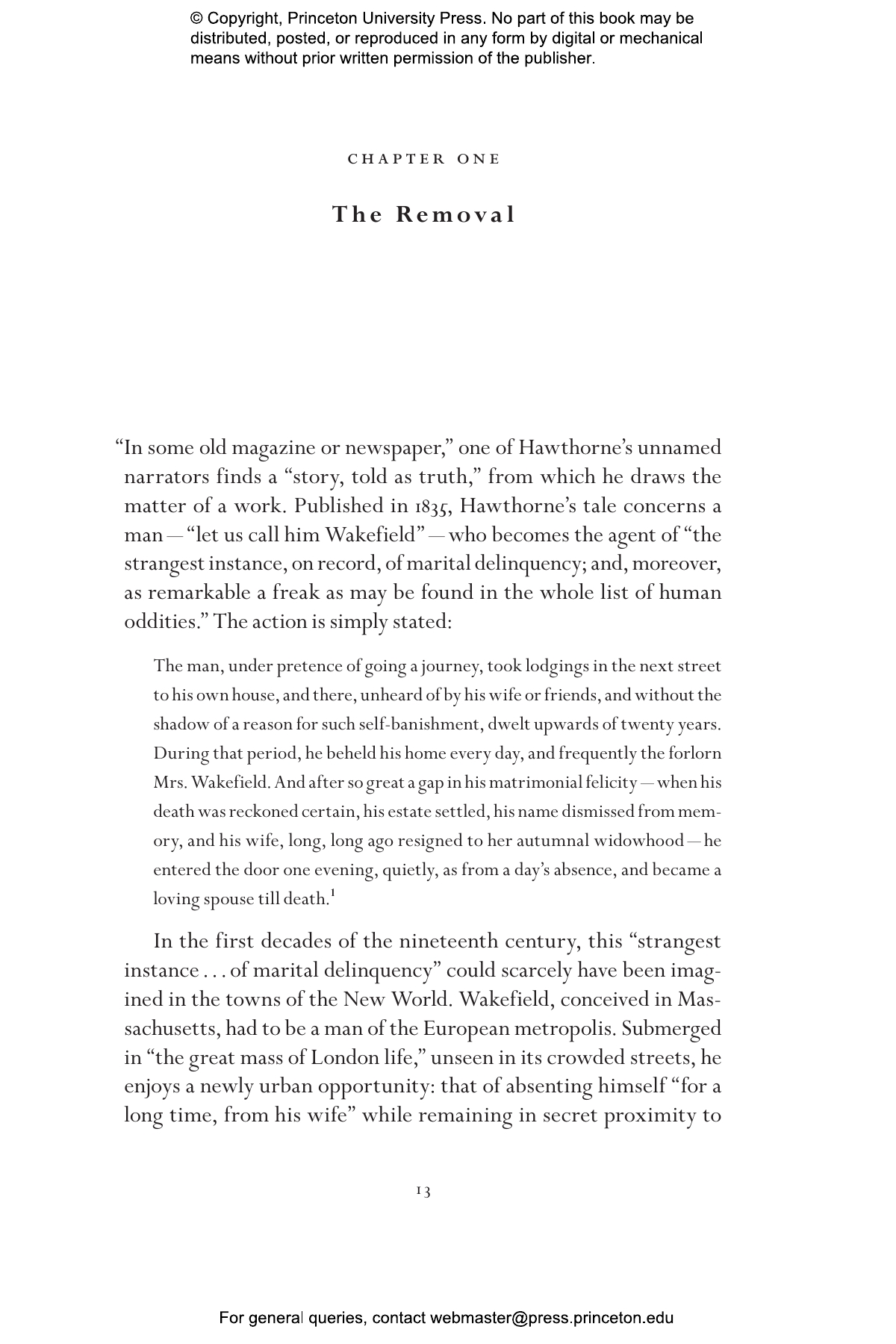 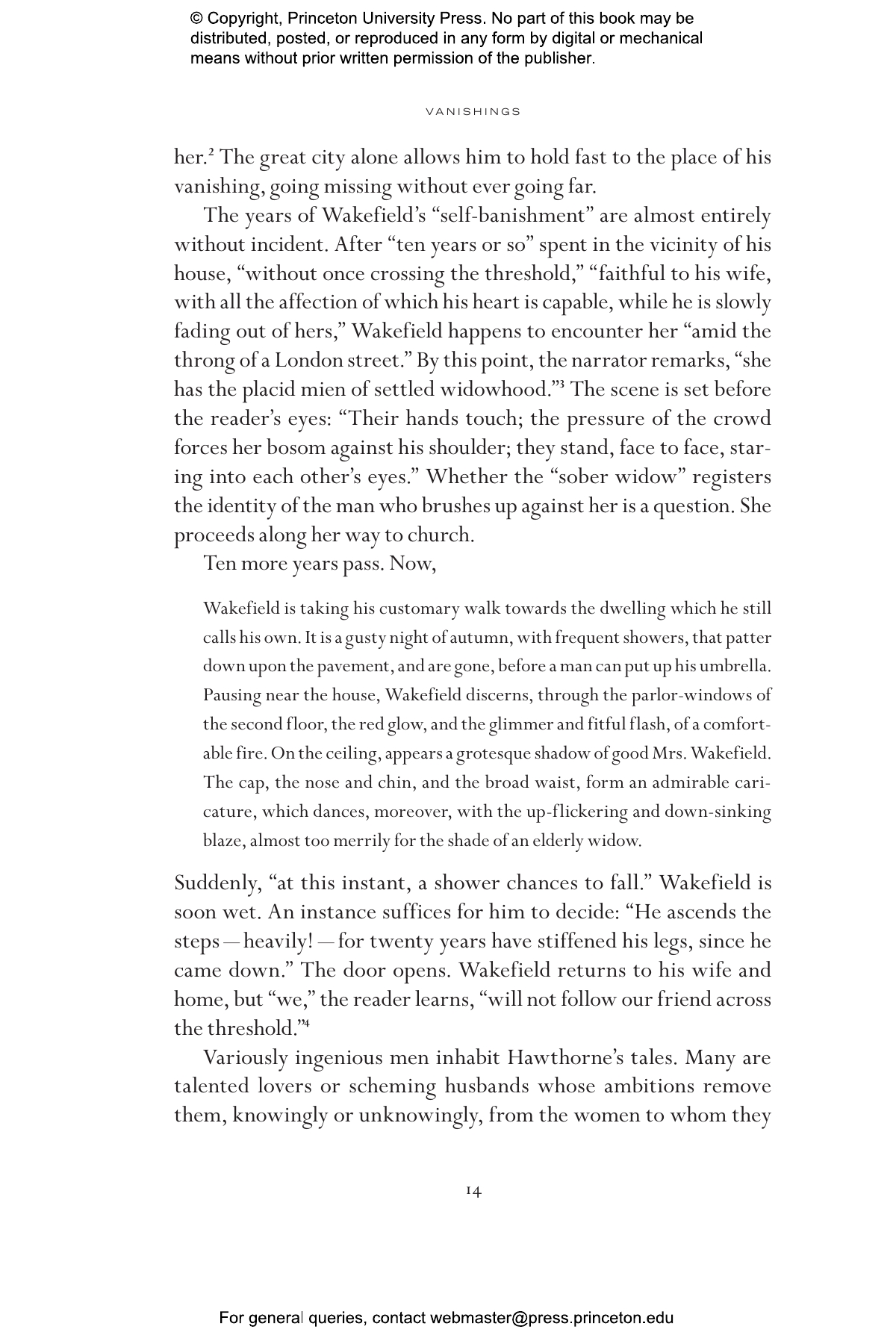 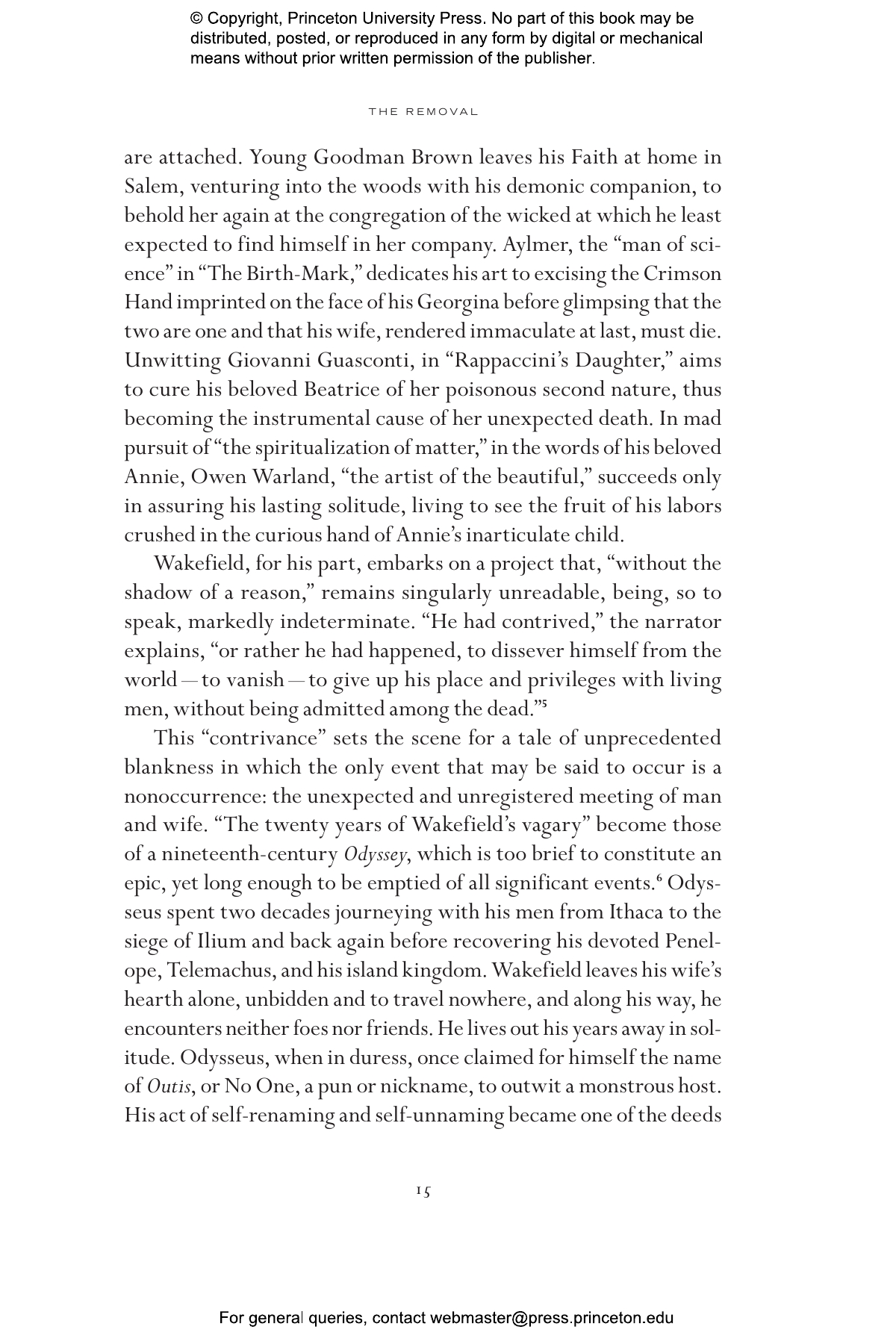 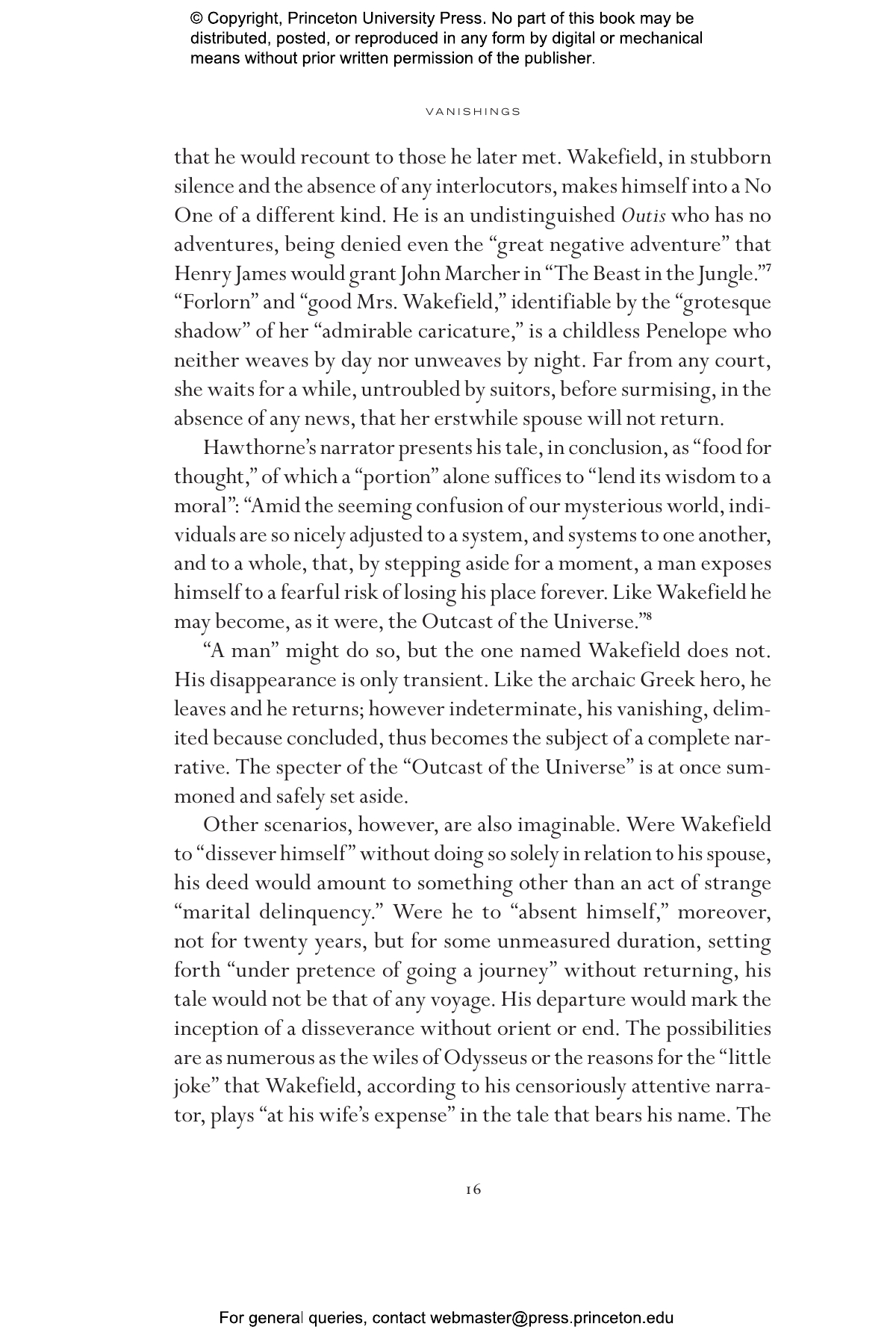 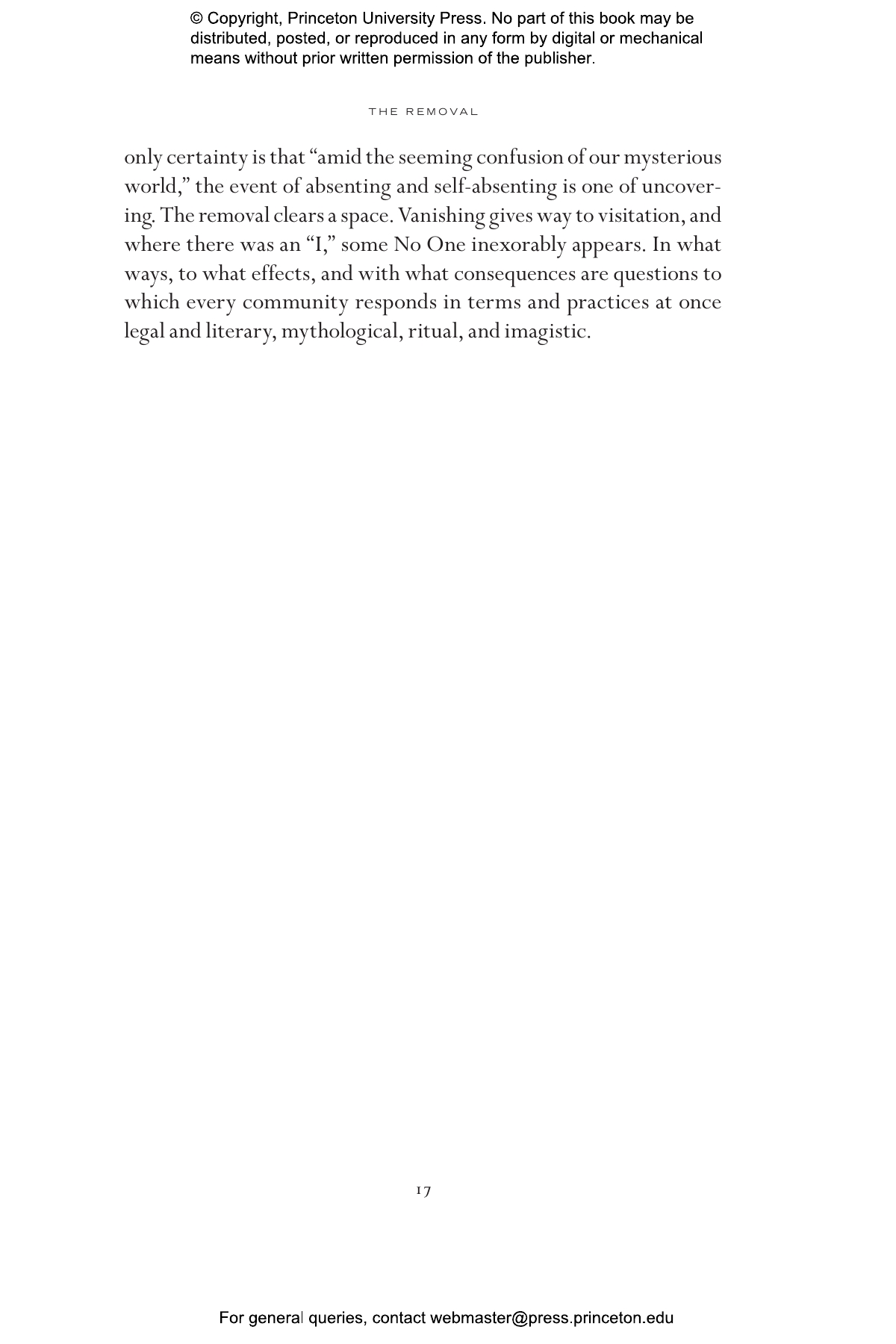 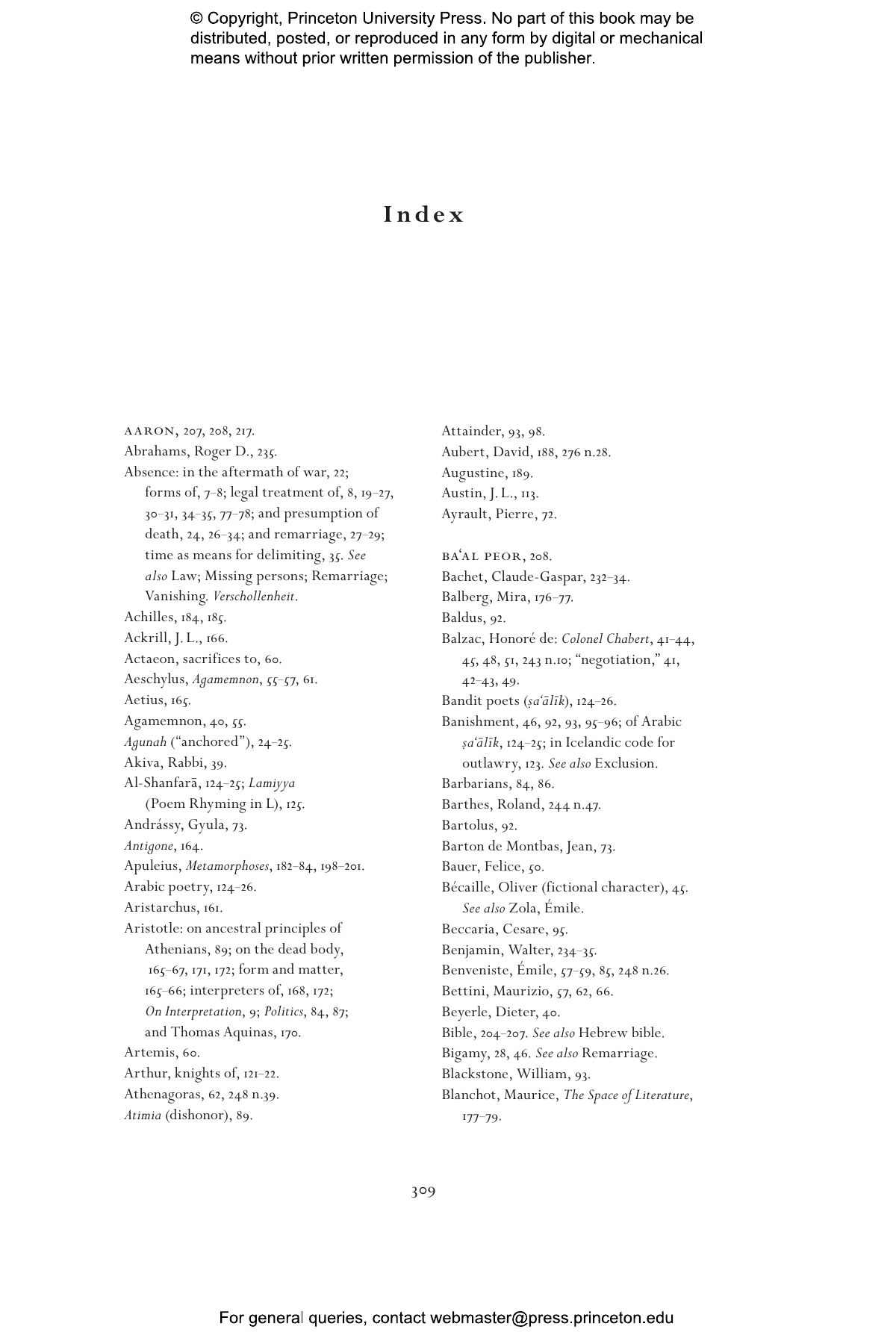 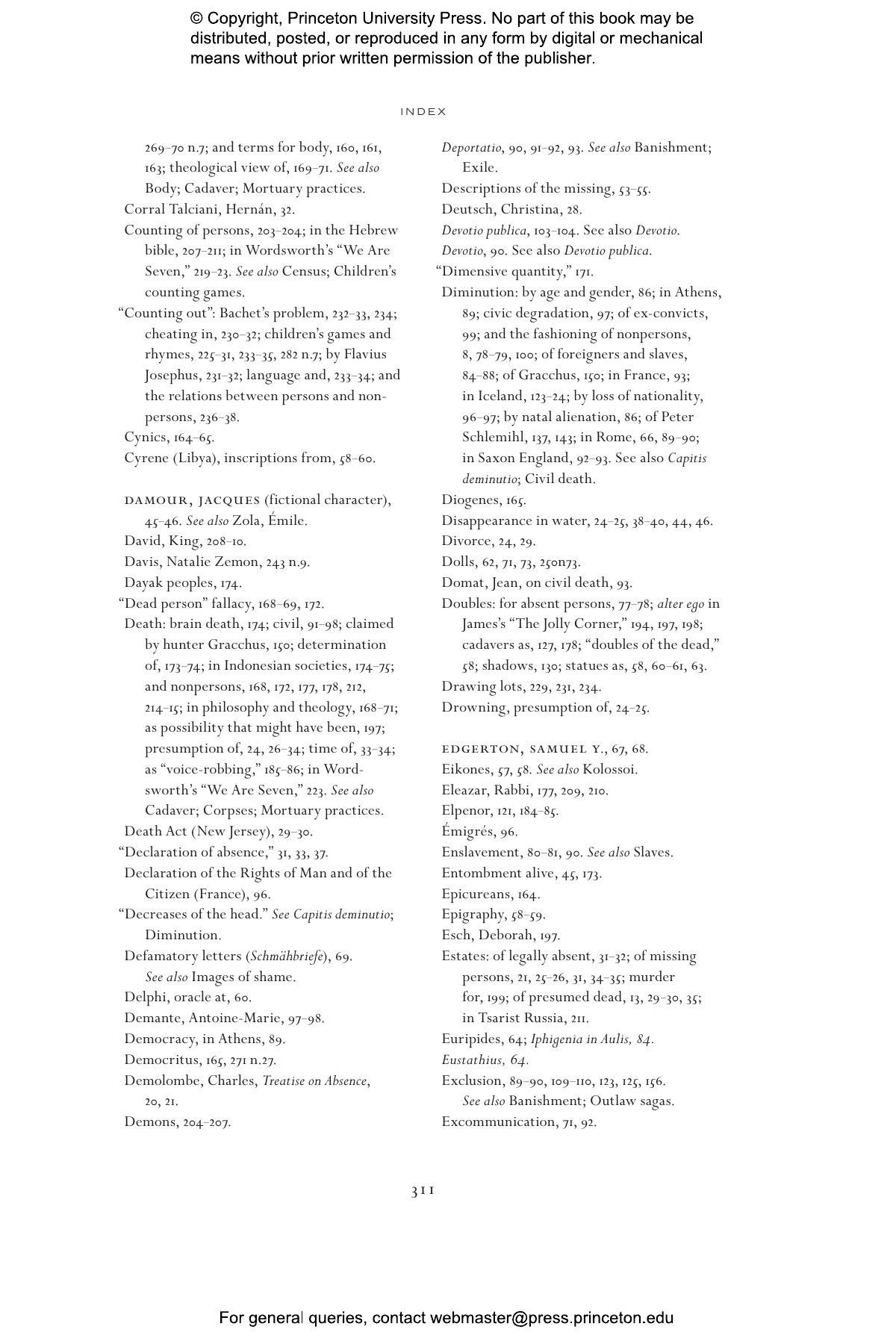 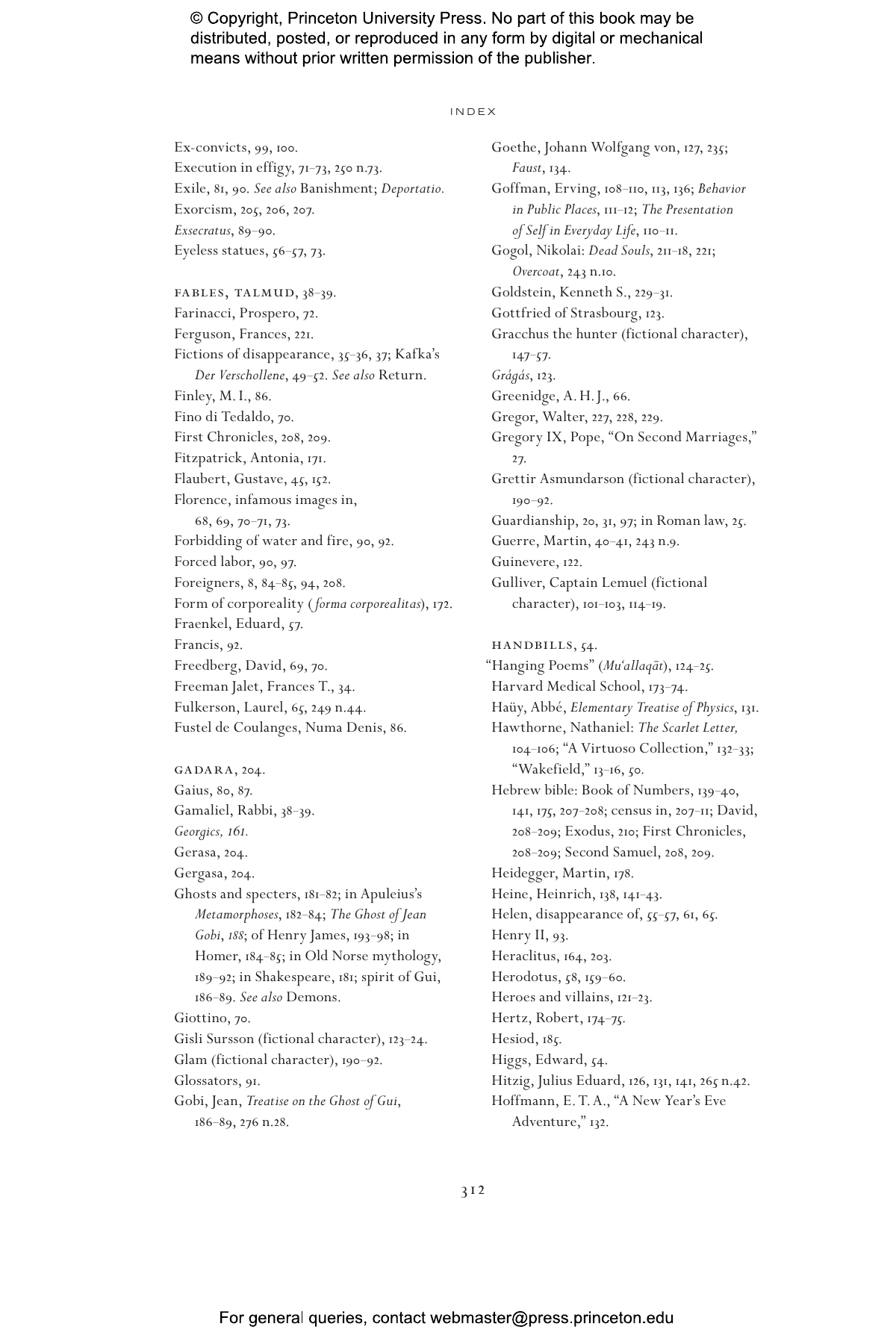 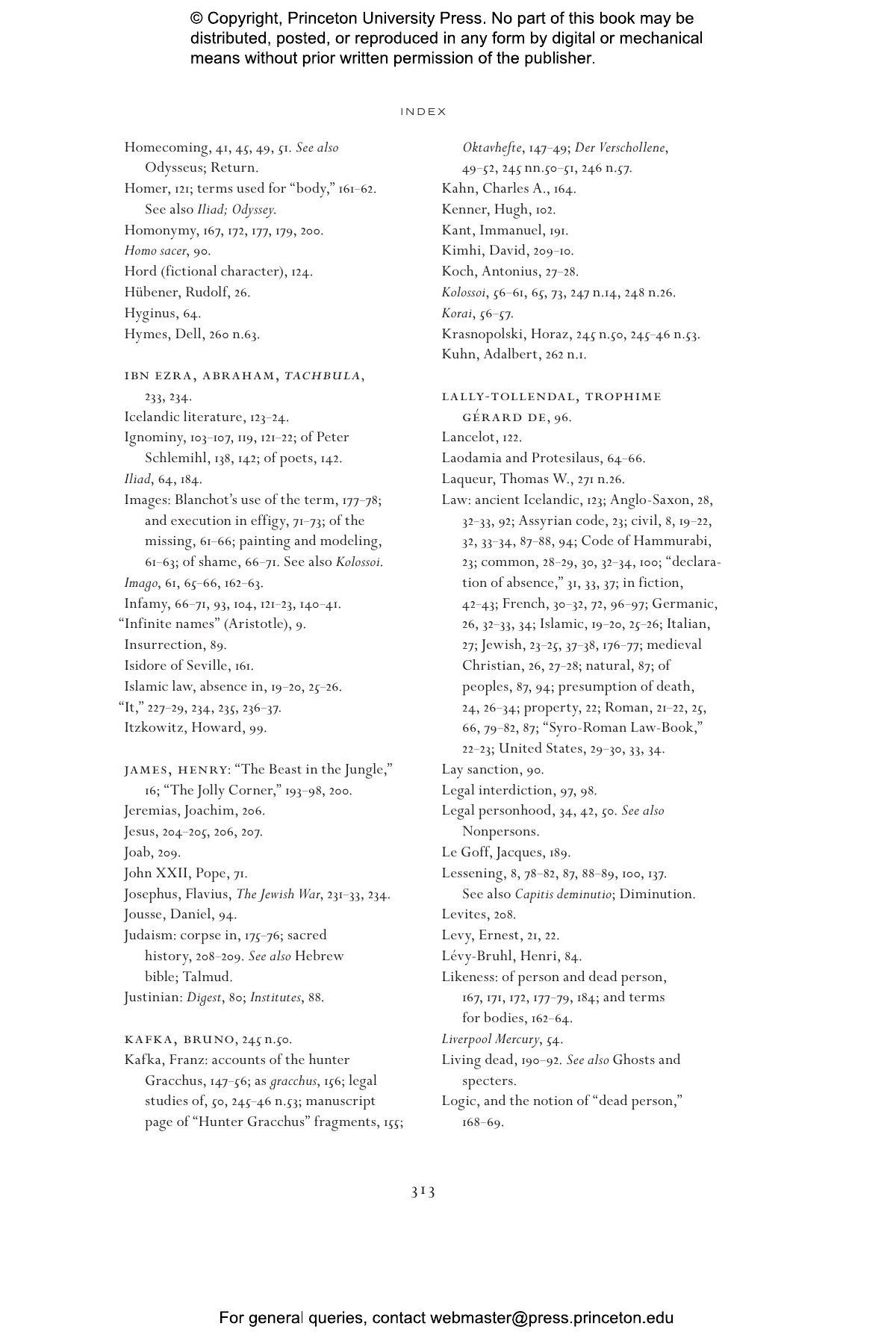 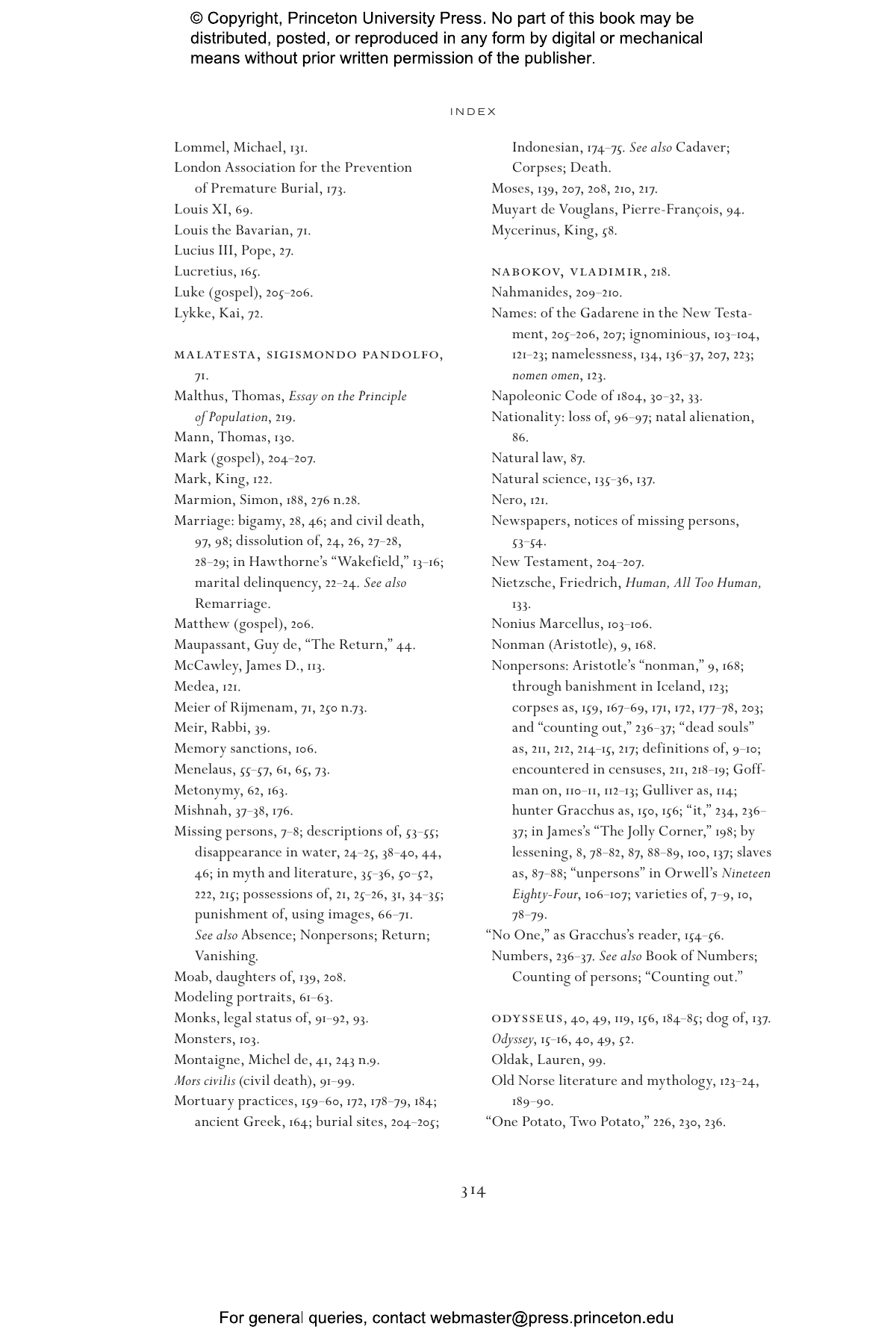 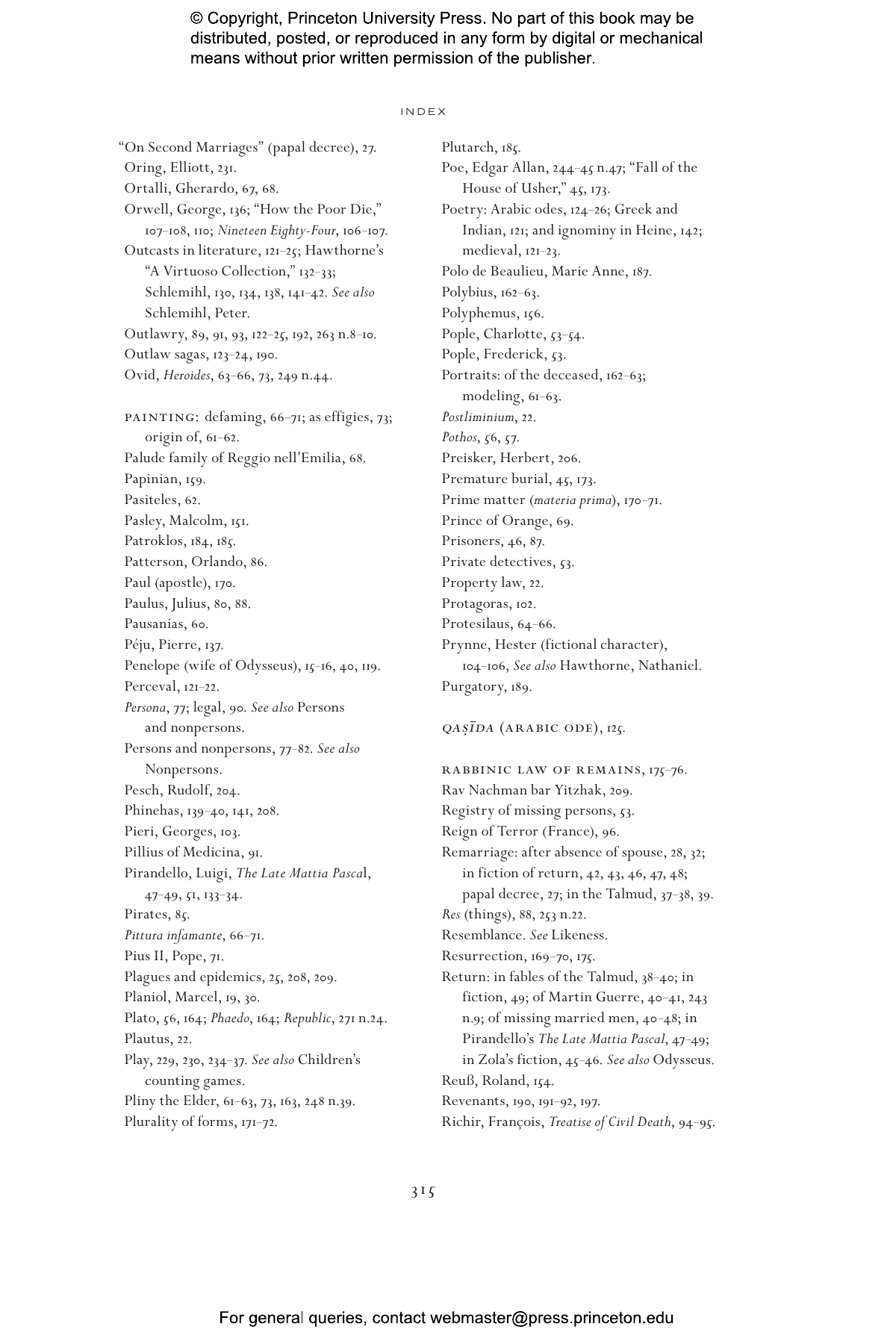 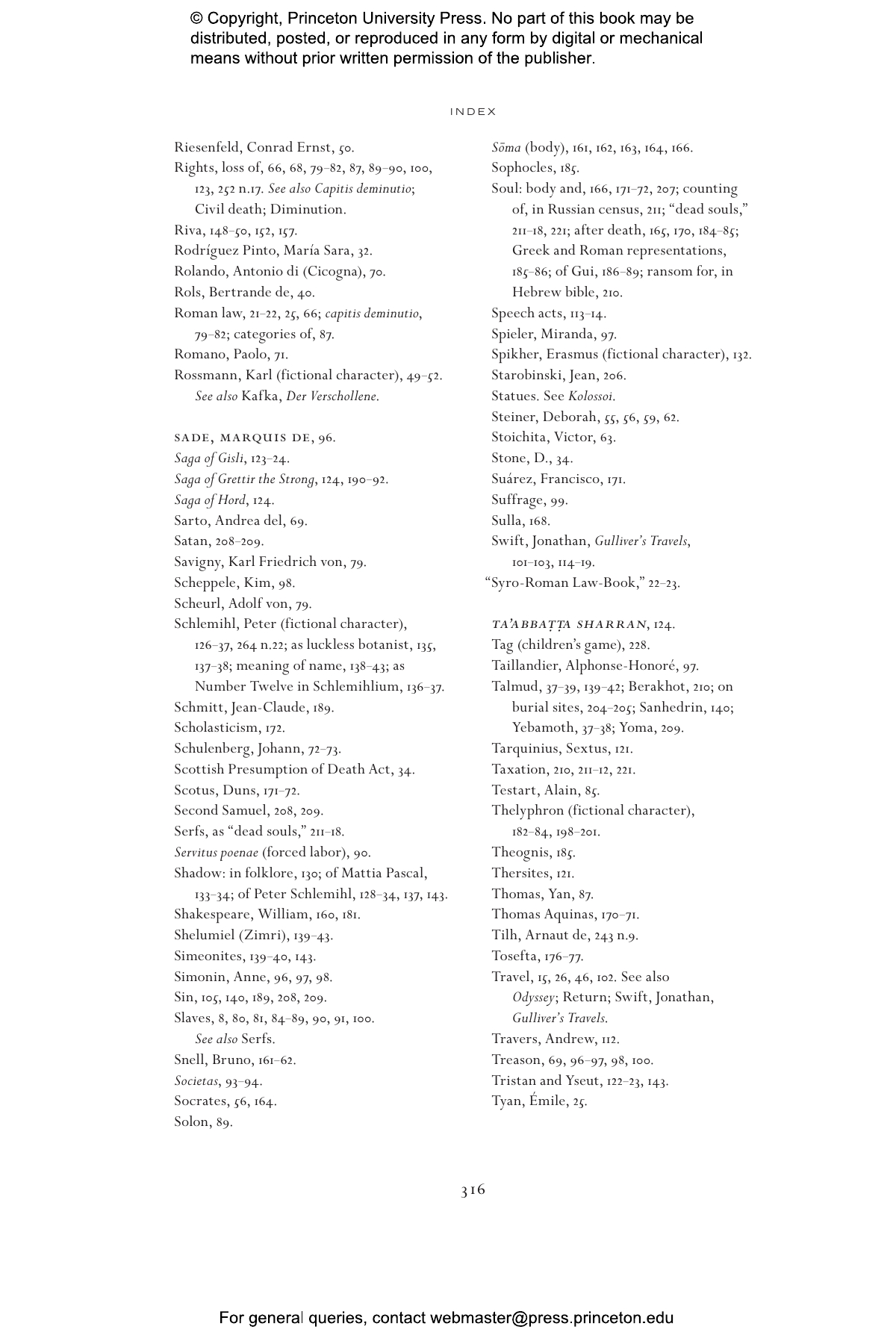 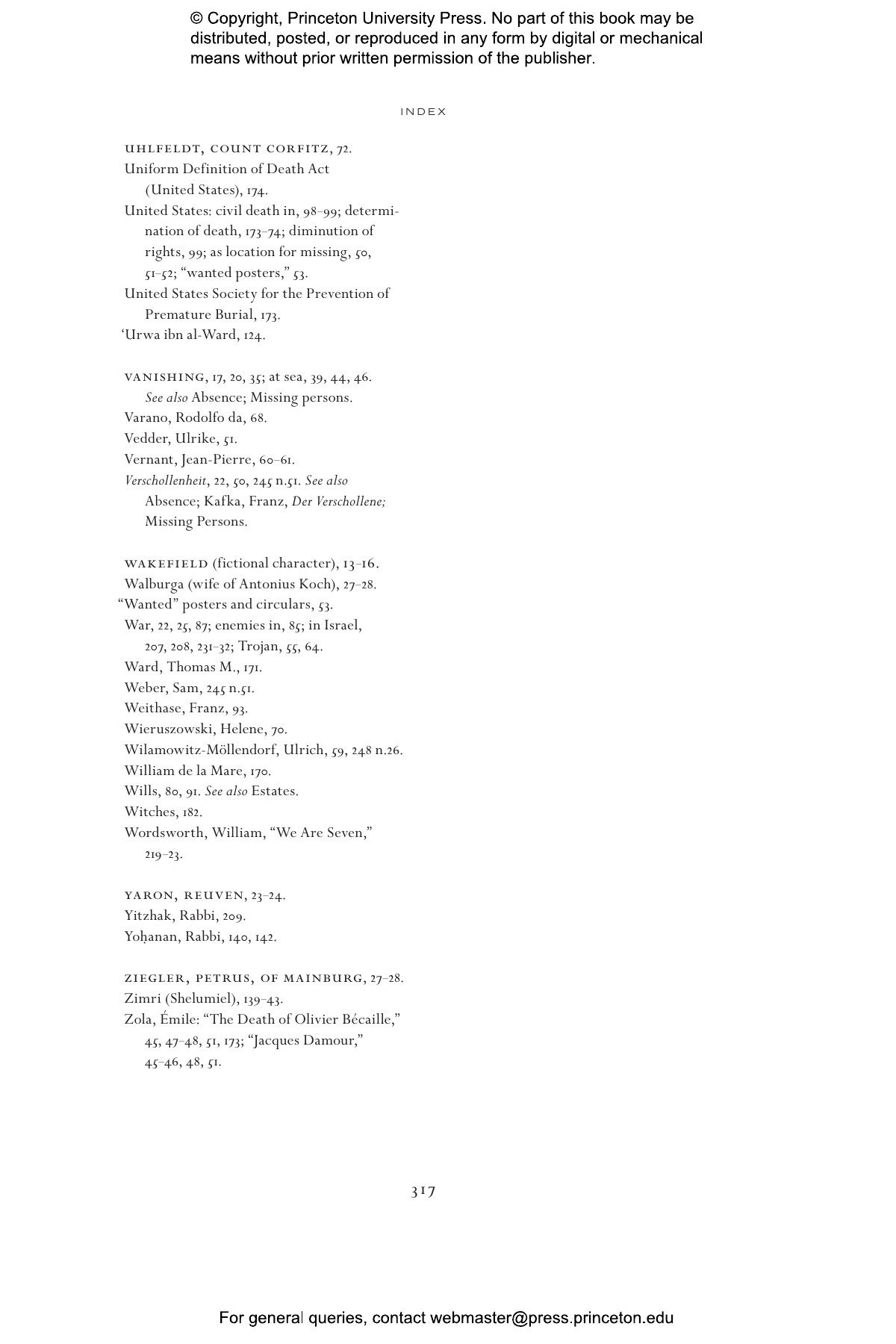 An intellectually adventurous account of the role of nonpersons that explores their depiction in literature and challenges how they are defined in philosophy, law, and anthropology 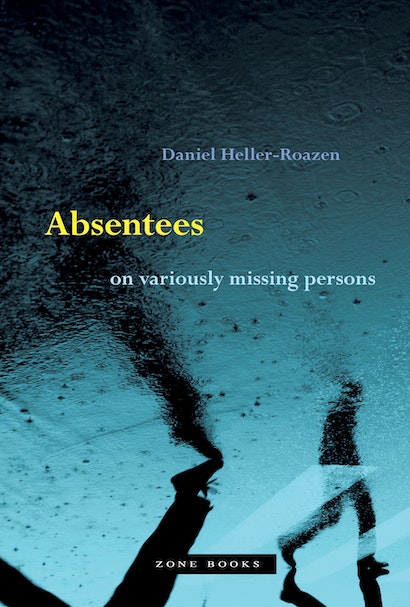 In thirteen interlocking chapters, Absentees explores the role of the missing in human communities, asking an urgent question: How does a person become a nonperson, whether by disappearance, disenfranchisement, or civil, social, or biological death? Only somebody can become a “nobody,” but, as Daniel Heller-Roazen shows, the ways of being a nonperson are as diverse and complex as they are mysterious and unpredictable. Heller-Roazen treats the variously missing persons of the subtitle in three parts: Vanishings, Lessenings, and Survivals. In each section and with multiple transhistorical and transcultural examples, he challenges the categories that define nonpersons in philosophy, ethics, law, and anthropology. Exclusion, infamy, and stigma; mortuary beliefs and customs; children’s games and state censuses; ghosts and “dead souls” illustrate the lives of those lacking or denied full personhood. In the archives of fiction, Heller-Roazen uncovers figurations of the missing—from Helen of Argos in Troy or Egypt to Hawthorne’s Wakefield, Swift’s Captain Gulliver, Kafka’s undead hunter Gracchus, and Chamisso’s long-lived shadowless Peter Schlemihl. Readers of The Enemy of All and No One’s Ways will find a continuation of those books’ intense intellectual adventures, with unexpected questions and arguments arising every step of the way. In a unique voice, Heller-Roazen’s thought and writing capture the intricacies of the all-too-human absent and absented.

Daniel Heller-Roazen is the Arthur W. Marks ’19 Professor of Comparative Literature and the Council of Humanities at Princeton University. He is the author, most recently, of No One’s Ways: An Essay on Infinite Naming, Dark Tongues: The Art of Rogues and Riddlers, and The Fifth Hammer: Pythagoras and the Disharmony of the World.

"Absentees bristles with fresh readings. . . . In fact, it’s a fundamental inquiry into the disposition among bodies, language, and politics."—Brian Dillon, 4Columns

"I read Absentees in such a lax state, and it snapped me out of it for a while. With all its case studies it reads like a gripping (trans)historical docudrama."—Hal Foster, London Review of Books ​​​​​​​

"Absentees offers a framework for seeing the world from the viewpoint of those who are only partly in it, as well as for those who’ve recently left."—John Washington, The Baffler

"Unexpected leaps across archives, through centuries, and from one text to the next are a compelling characteristic of Heller-Roazen’s scholarship. . . . Such virtuosic effects remain an intellectual pleasure in Absentees. . . . There is much dazzlement and fascination along the way, as some of the many masks of nonpersons flash by."—Julie Orlemanski, Modern Philology

“The scholarly depth and imaginative range of Heller-Roazen’s writing have long attracted a diverse, committed readership of poets, students of fiction, literary theorists, and fellow scholars, among others. In his latest remarkable work, Heller-Roazen examines what it is to be designated by ancient and modern law, custom, myth, and literature as human, less-than-human, and nonhuman. What is it to be banished from human company, to become a nonperson and noncitizen? What are the roles of the outsider, the shunned, the outlaw, and the maverick in regard to the arts and to human community? In this moment of renewed authoritarianism, hypernationalism, massive human dislocation, and raw religious and racial relations, such questions take on ever more urgent resonance. It is a work both to learn from and to delight in.”—Michael Palmer, author of The Laughter of the Sphinx

“Heller-Roazen crafts exciting and lucid prose without sacrificing a jot of intellectual authority as he illuminates the most abstruse realms of linguistics, psychoanalysis, theology, and aesthetics. He is a learned medievalist whose philosophical acumen gradually reveals itself to us (perhaps even to himself) as the historical investigation of liminality and negation in a remarkable series of books. With a mastery of multiple languages, he studies what has been hidden, displaced, or negated, but nevertheless cannot quite disappear—languages, senses, pirates, names, and, in this latest book, nonpersons. Absentees starts from a discussion of the literary trope of the disappearing man and spreads quickly (as in all of Heller-Roazen’s books) to the histories of literature, law, and philosophy.”—P. Adams Sitney, Emeritus Professor, Lewis Center for the Arts, Princeton University, and author of Visionary Film

“With Absentees, Heller-Roazen has produced yet another tour de force of eloquence and erudition. Absentees is essential reading for anyone interested in the legal or literary treatment of personhood in all its forms, whether dead, missing, diminished, or presumptively whole. Engaged with materials ranging from the Bible to Kafka to Roman law to children’s games, this book presents new theoretical conundrums for the reader to consider. It is rare to find an author who weaves scholarly rigor together with theoretical vision as deftly as Heller-Roazen, and in Absentees he is operating at the height of his powers.”—Bernadette Meyler, Carl and Sheila Spaeth Professor of Law, Stanford University, and author of Theaters of Pardoning