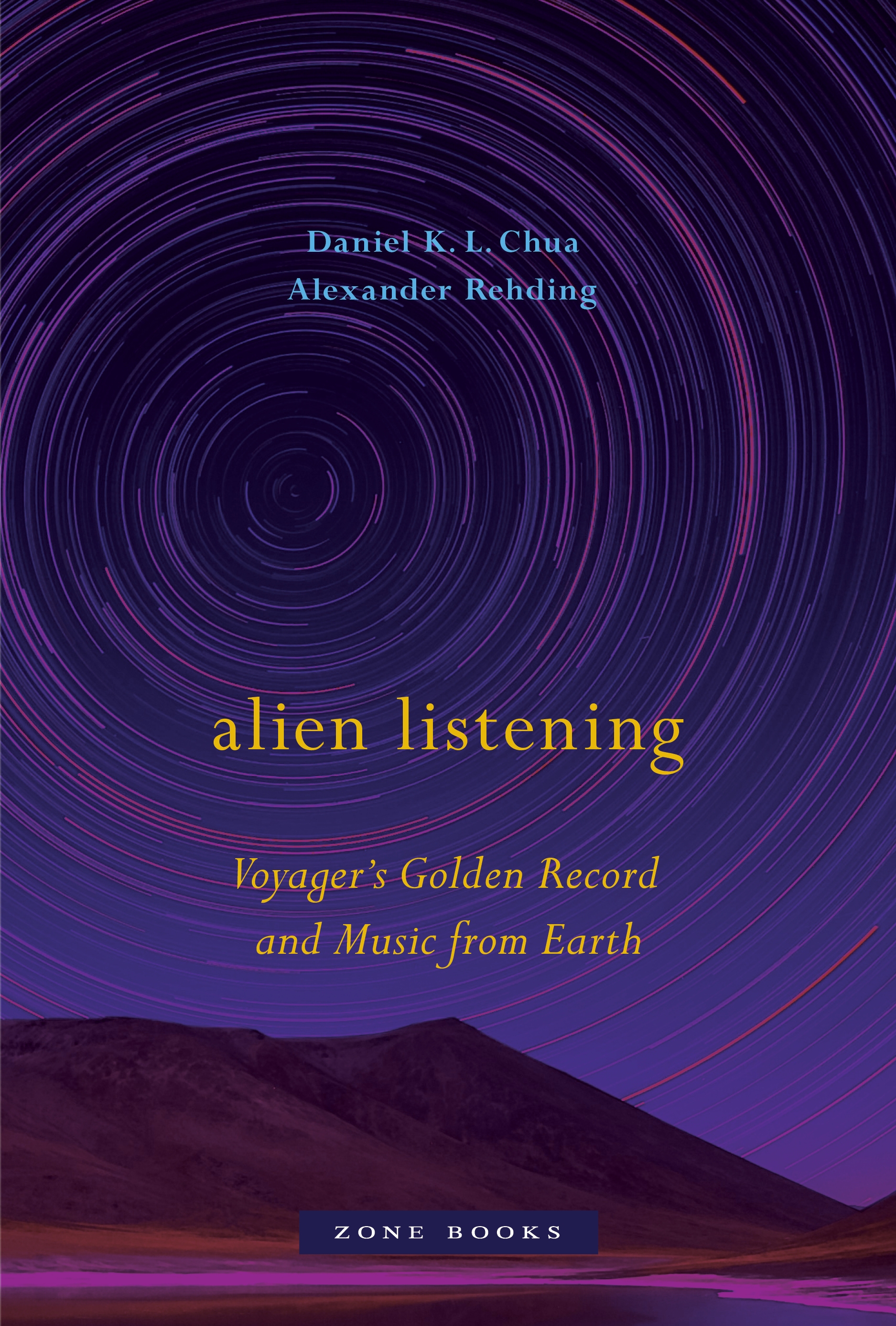 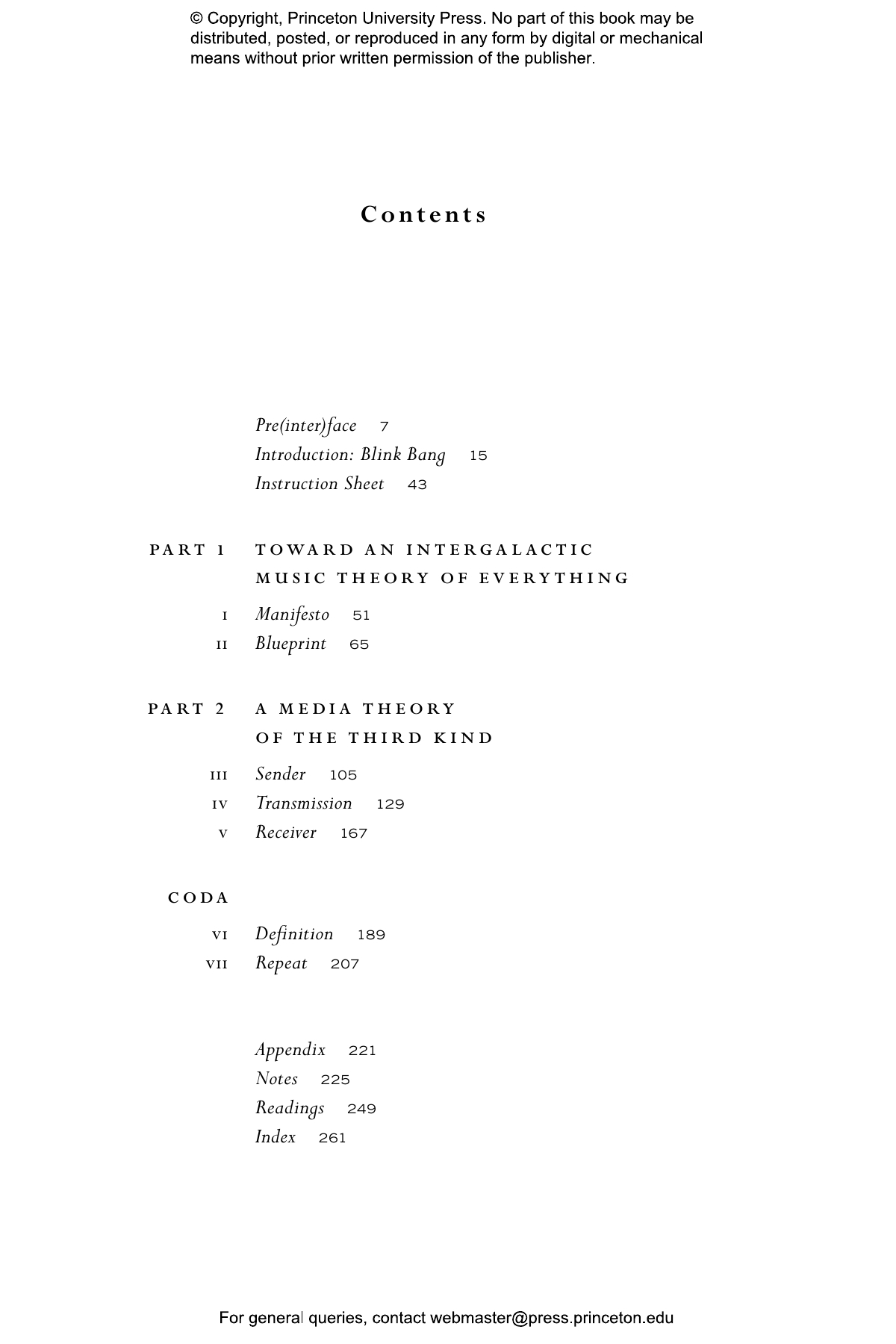 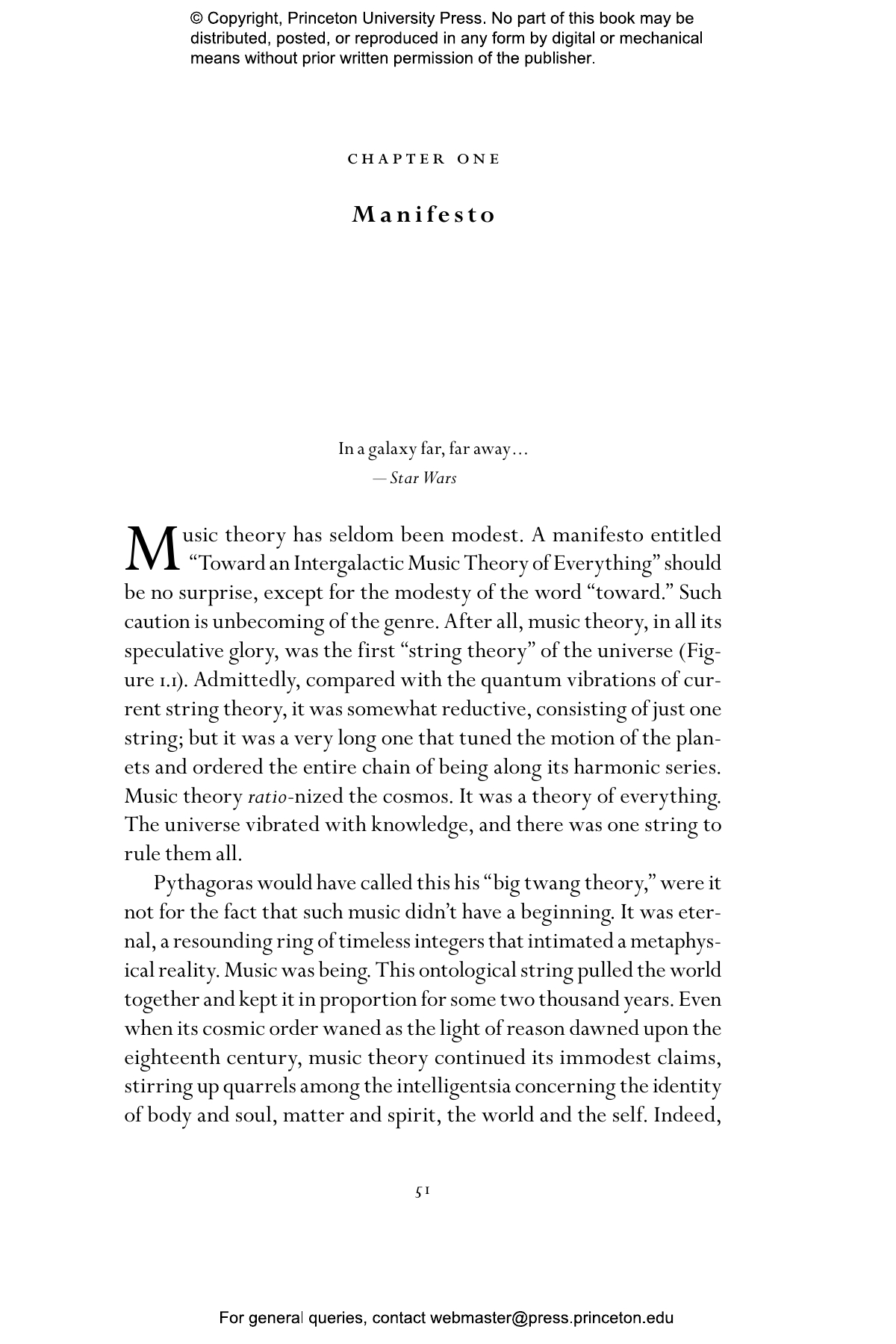 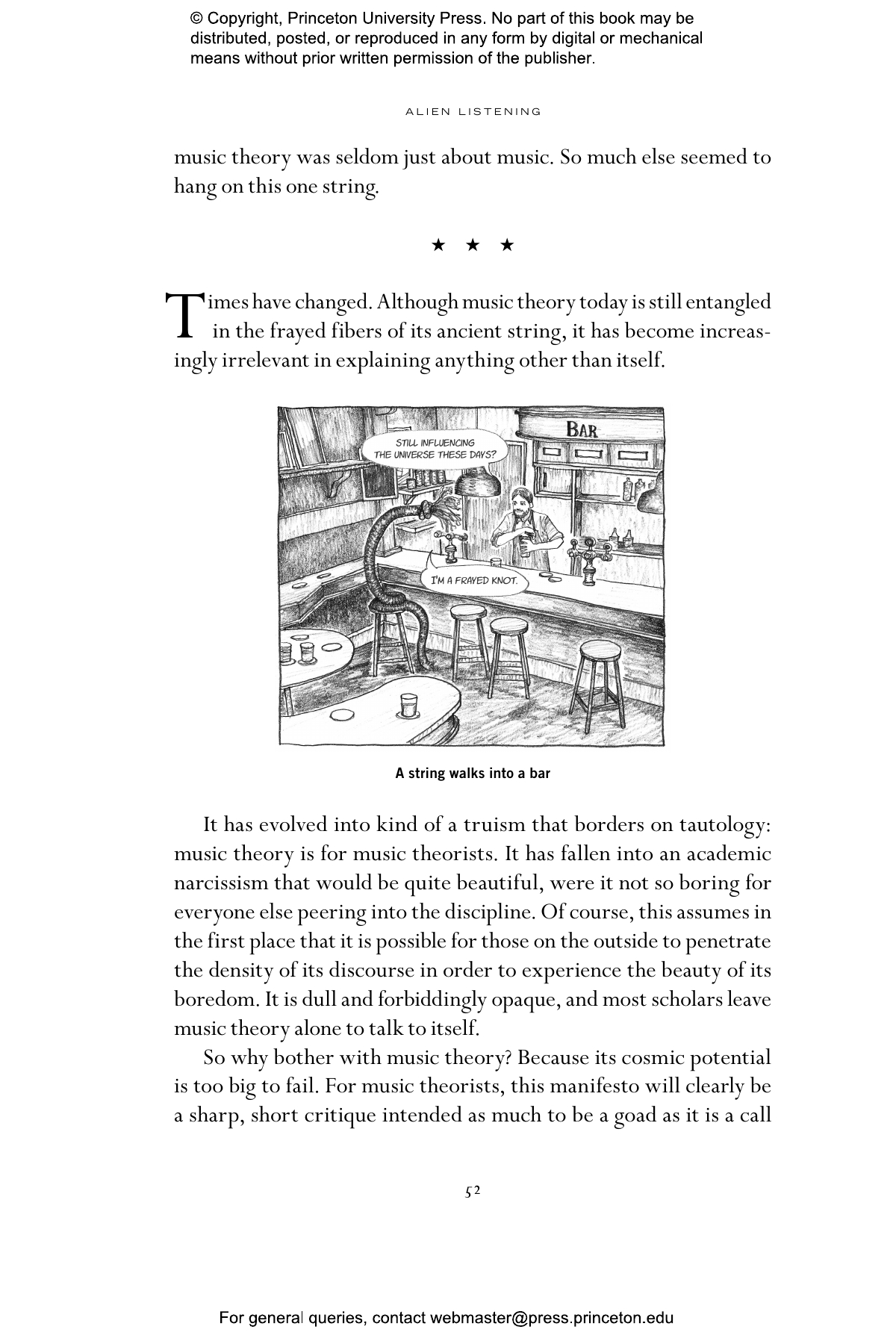 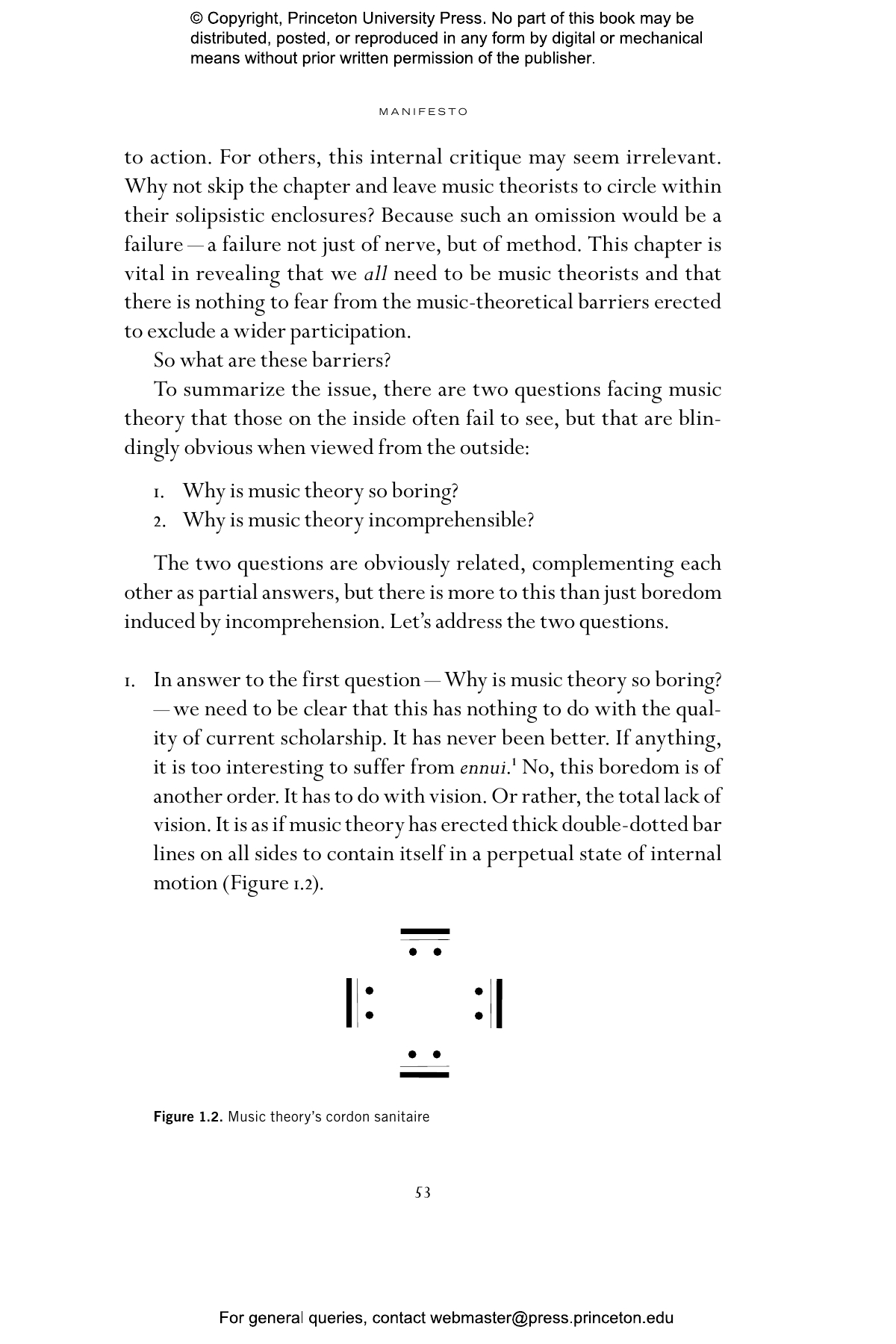 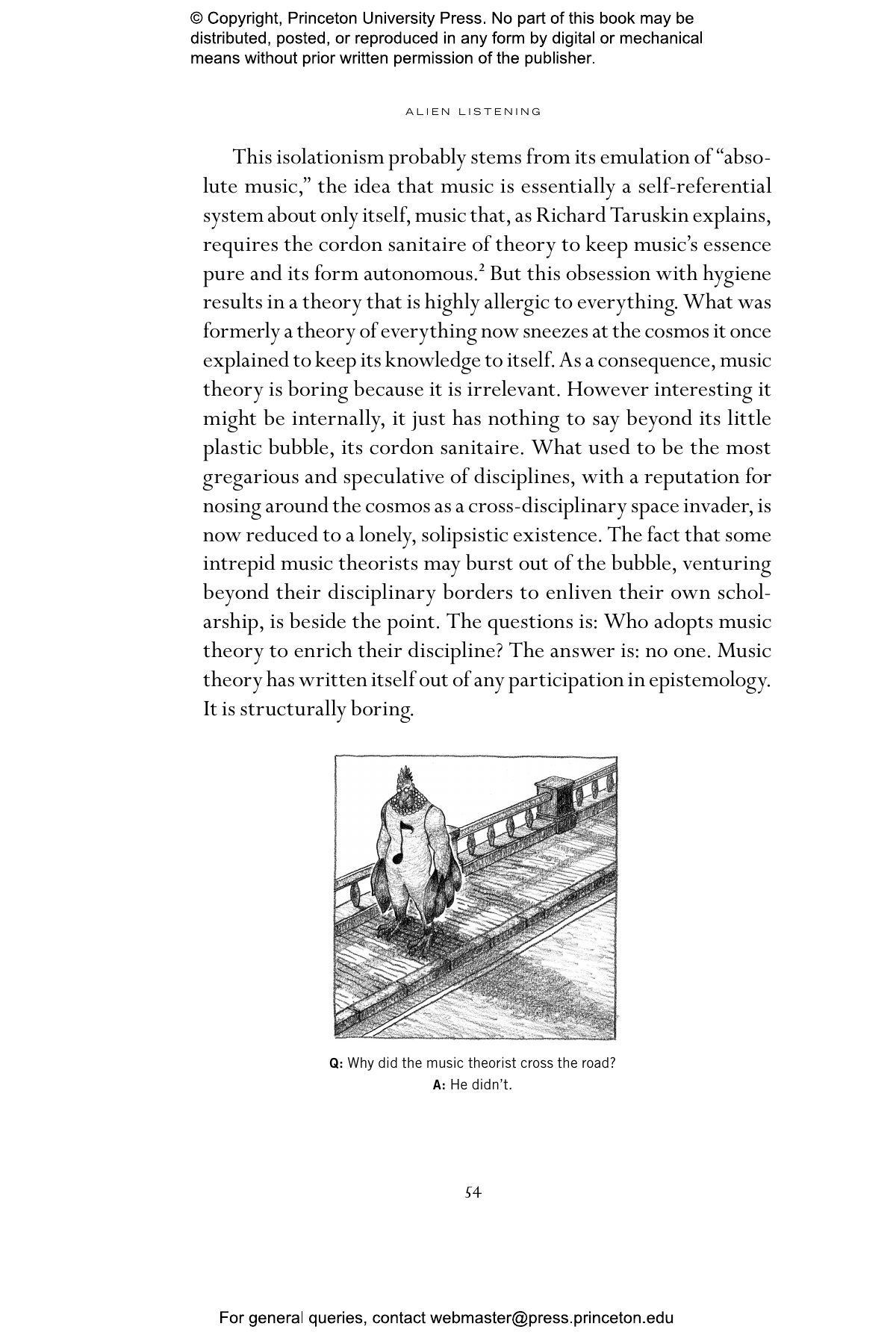 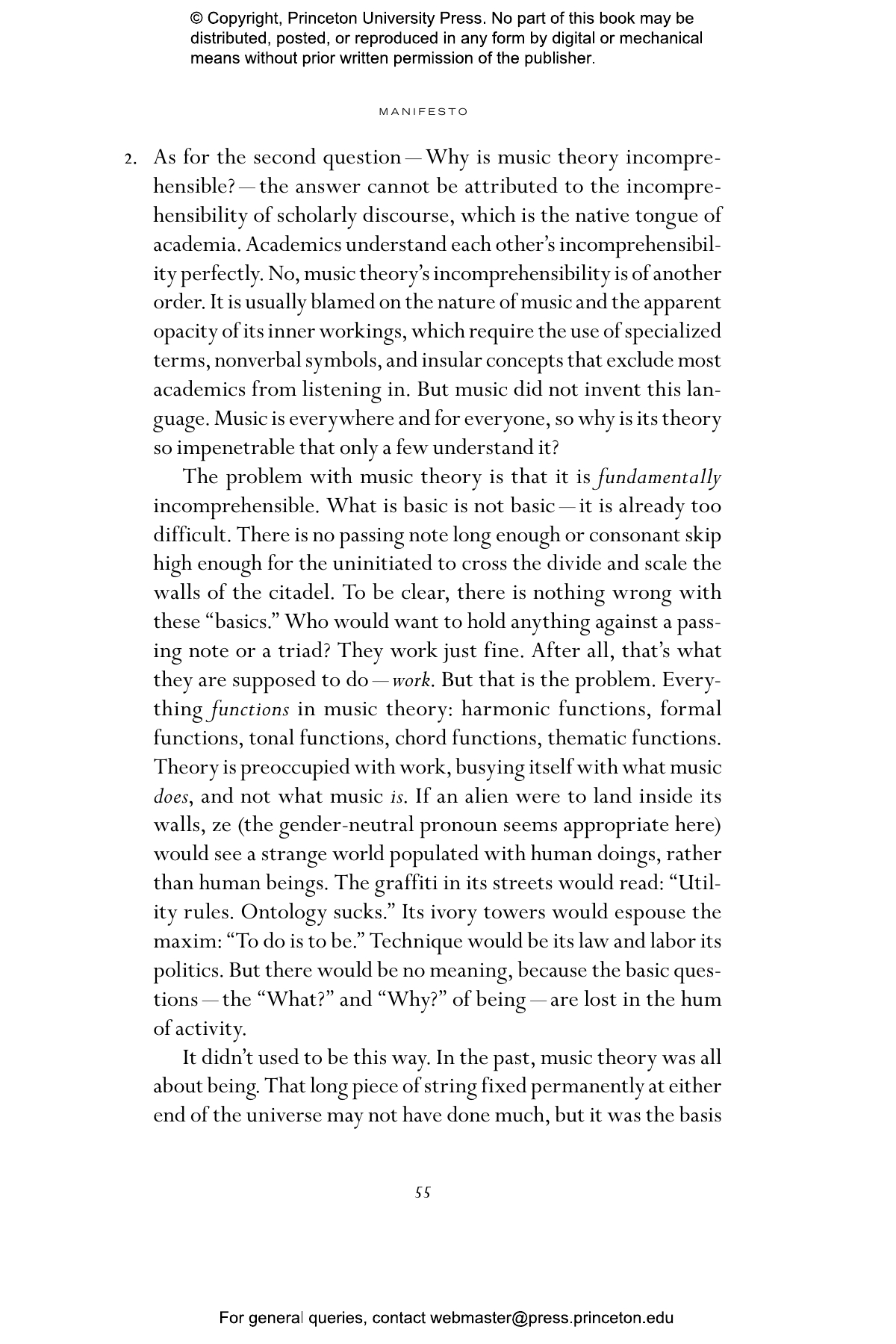 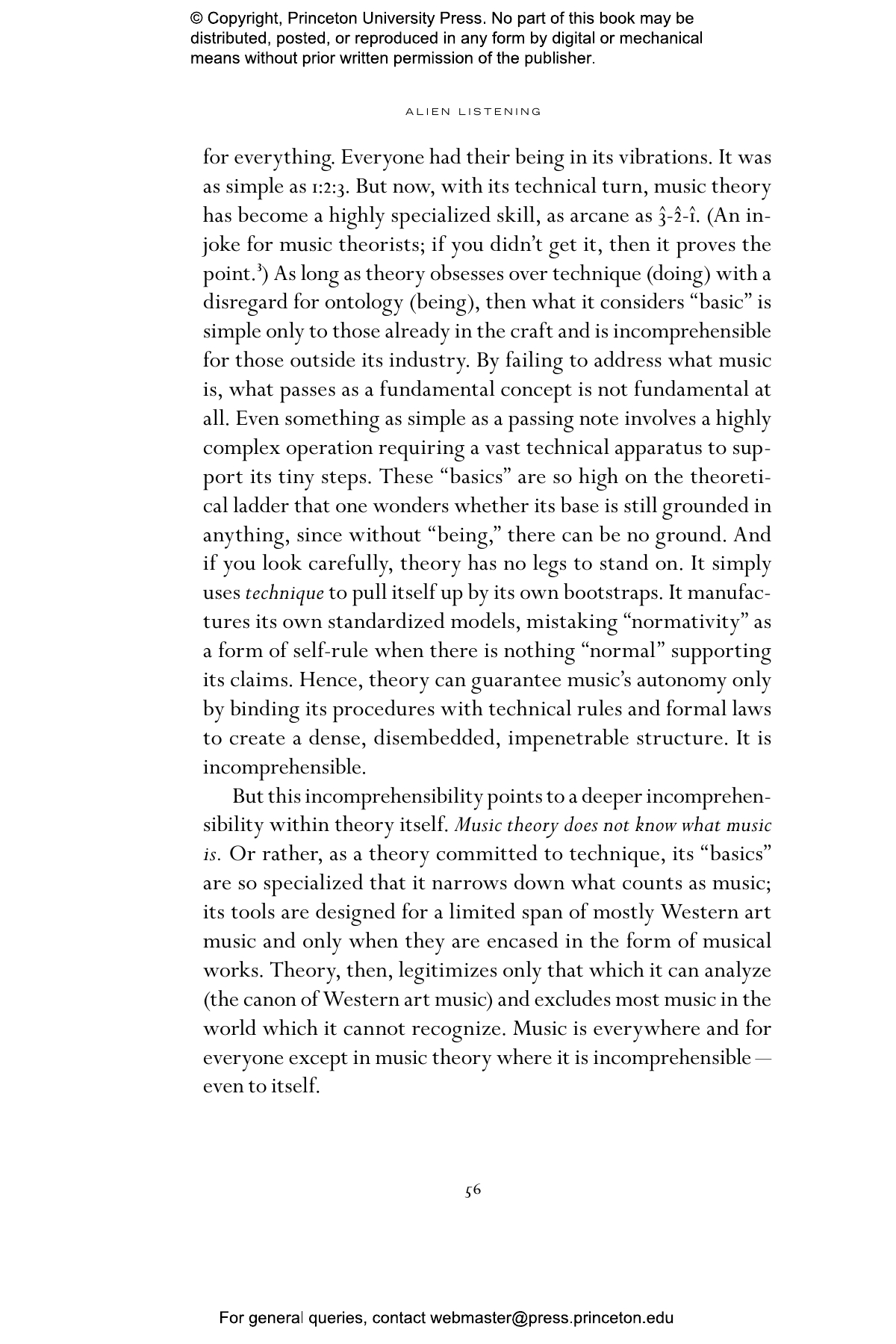 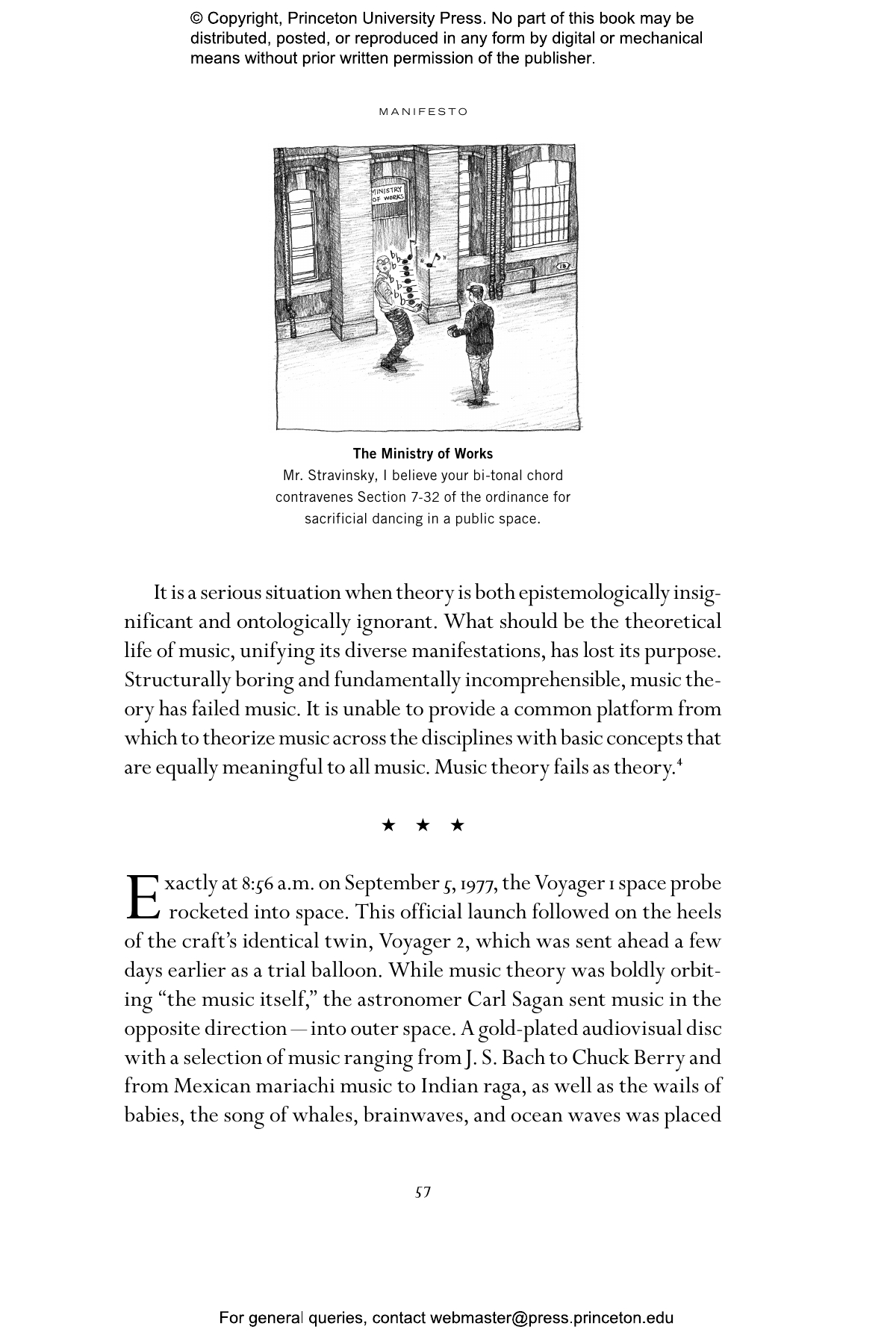 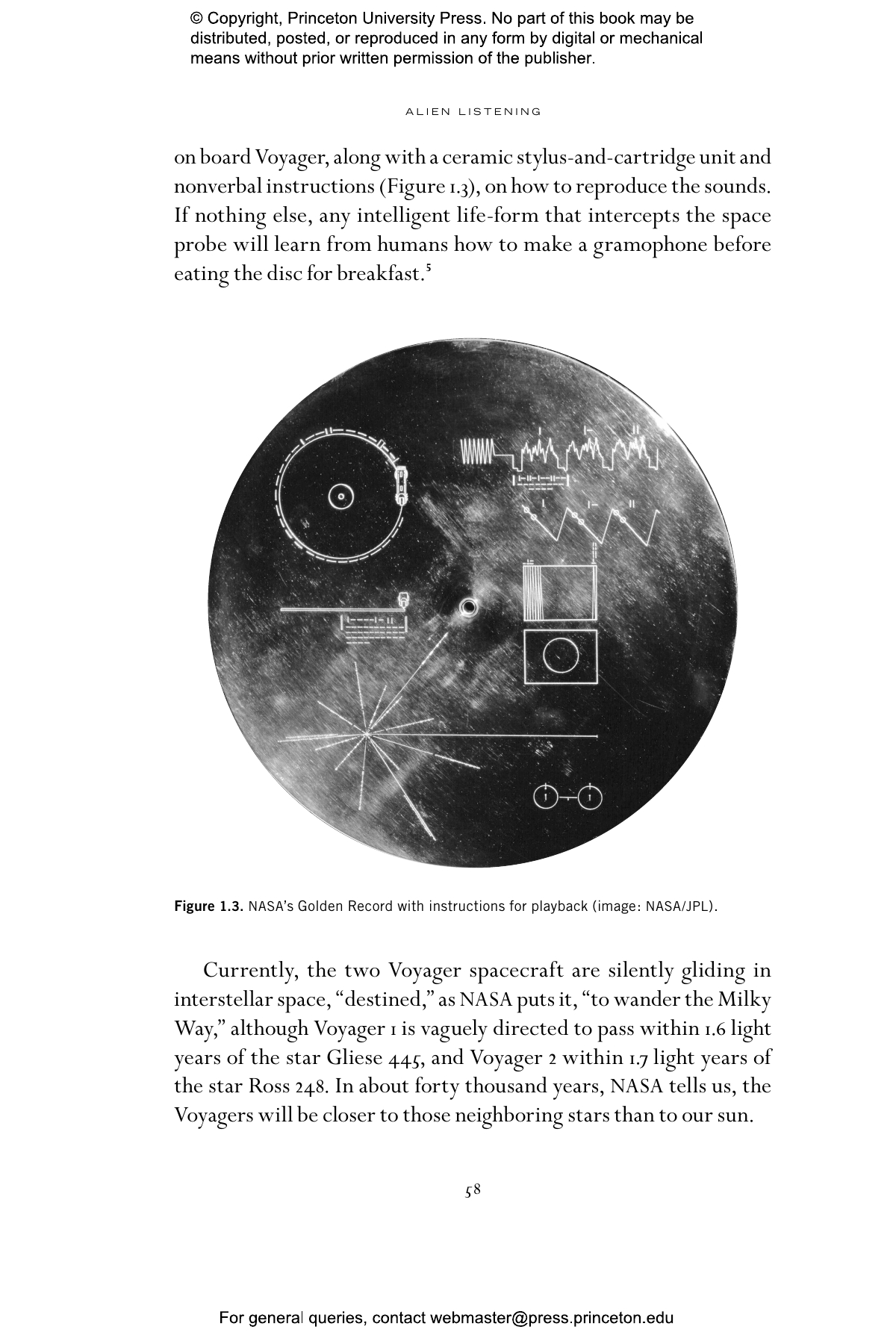 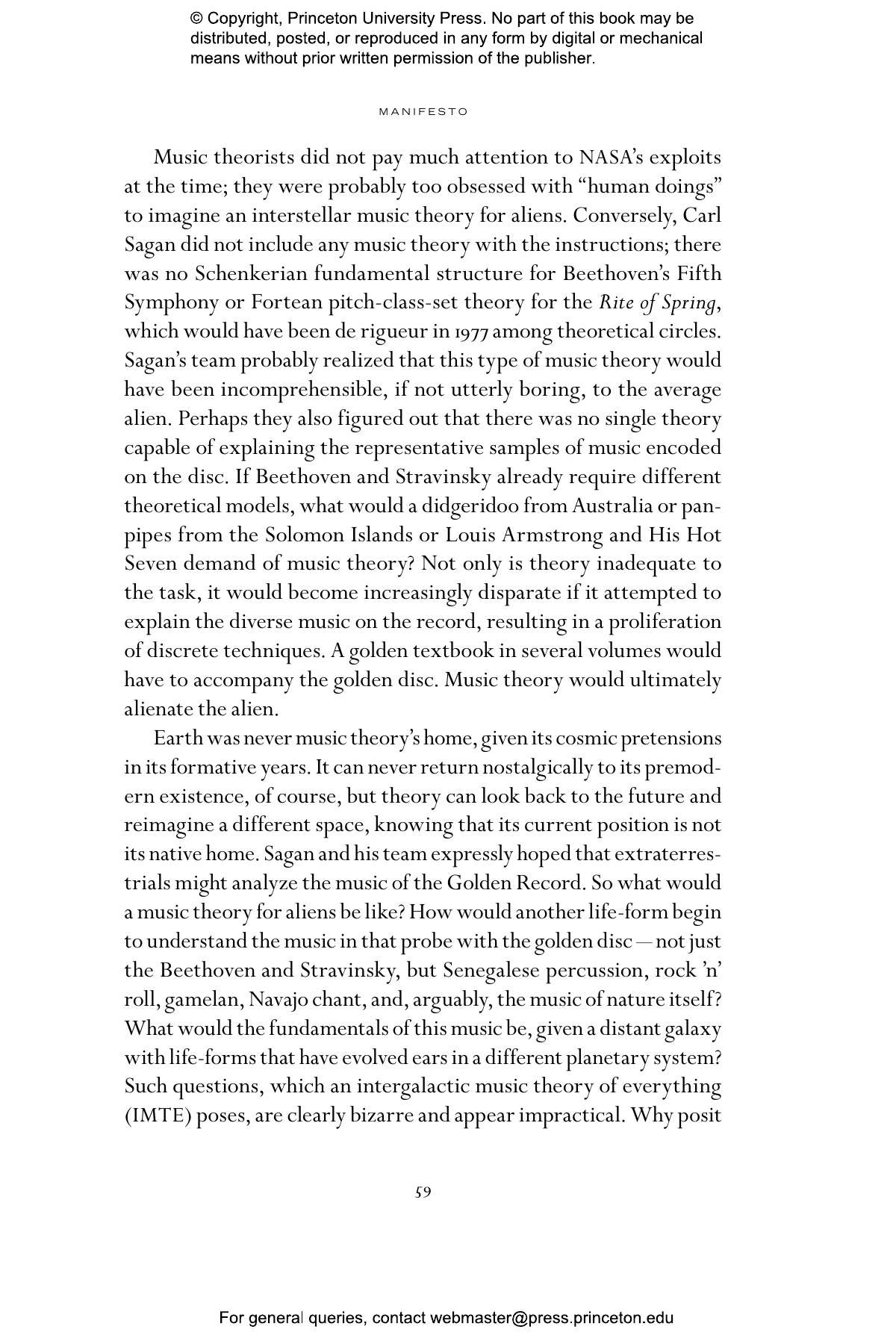 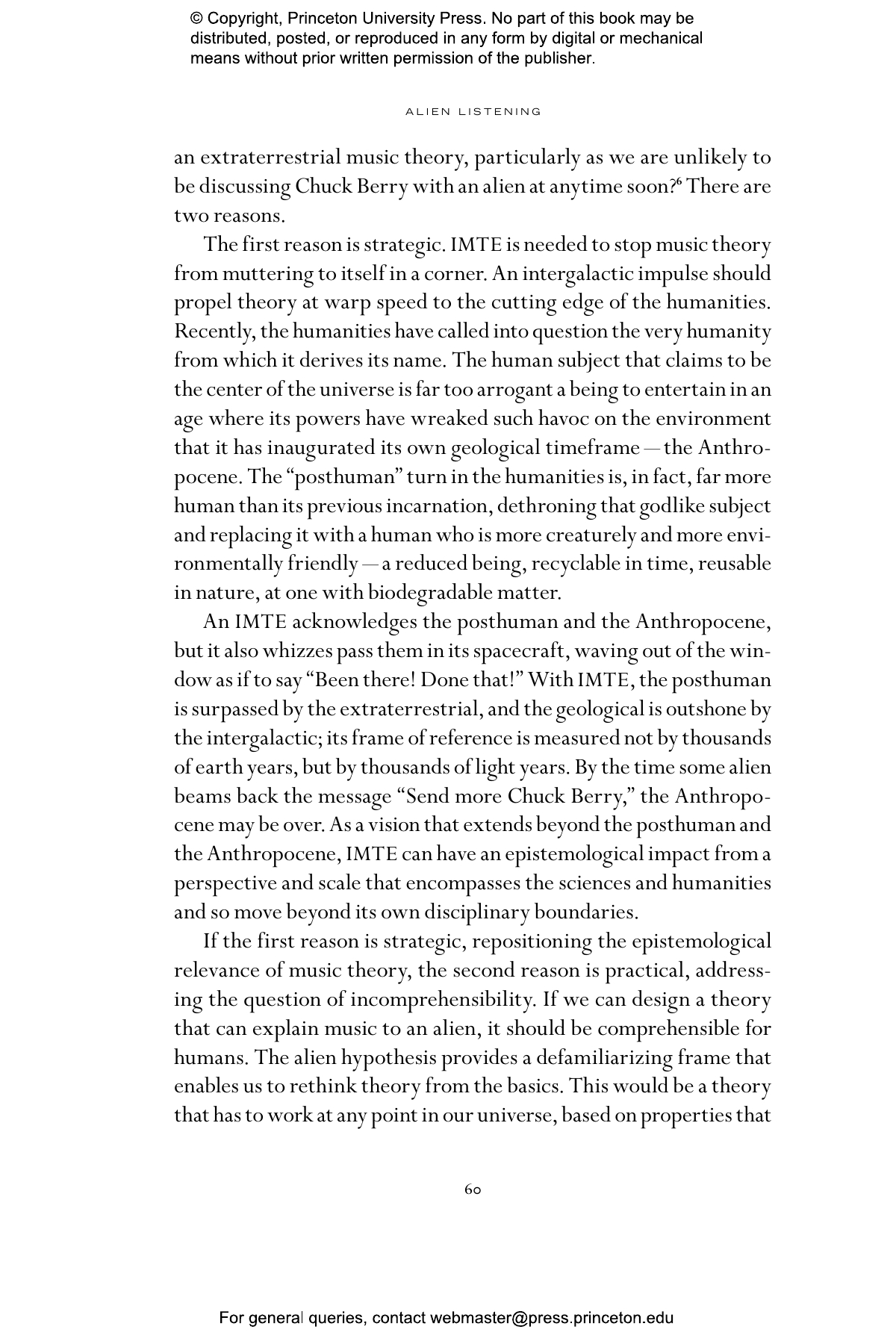 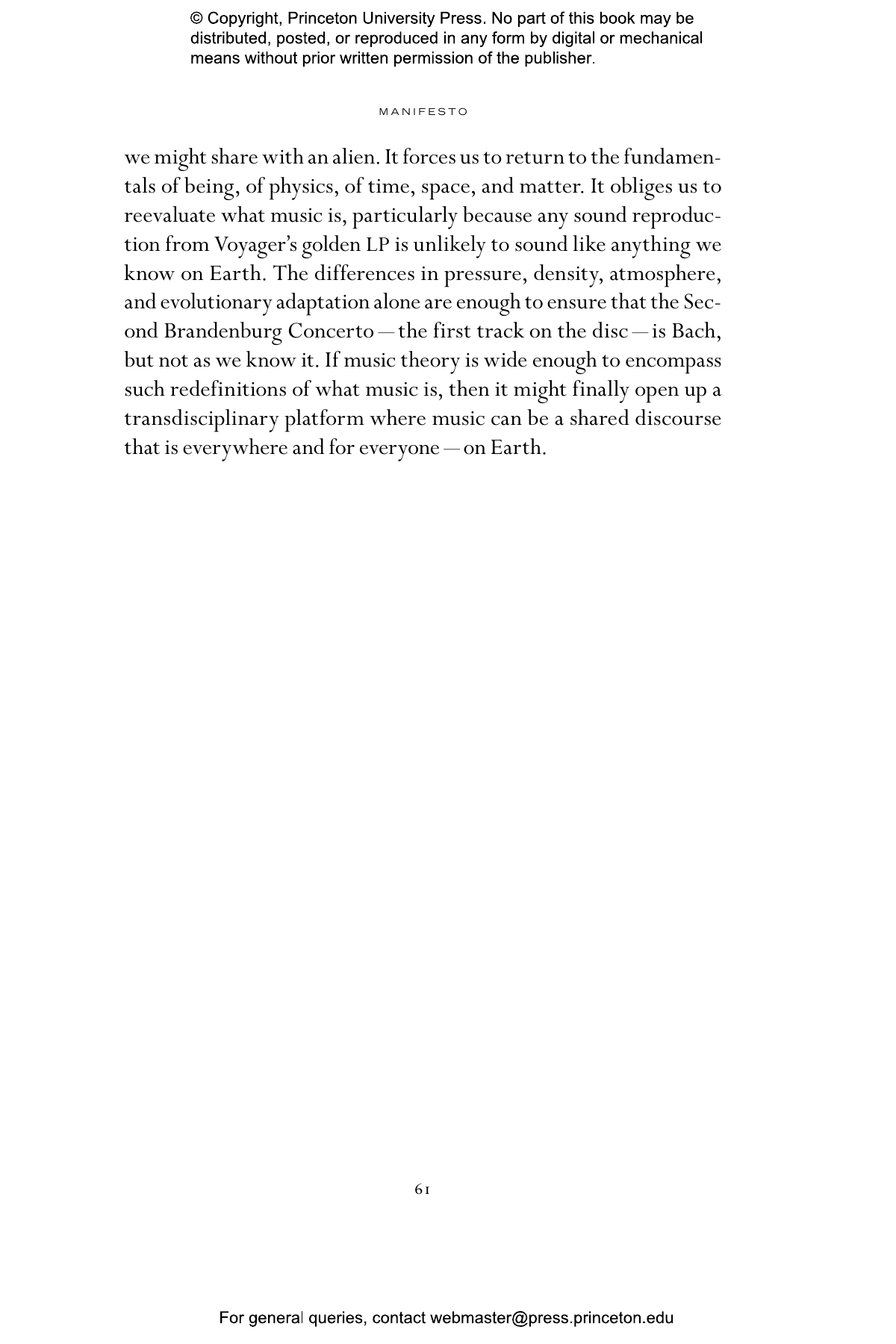 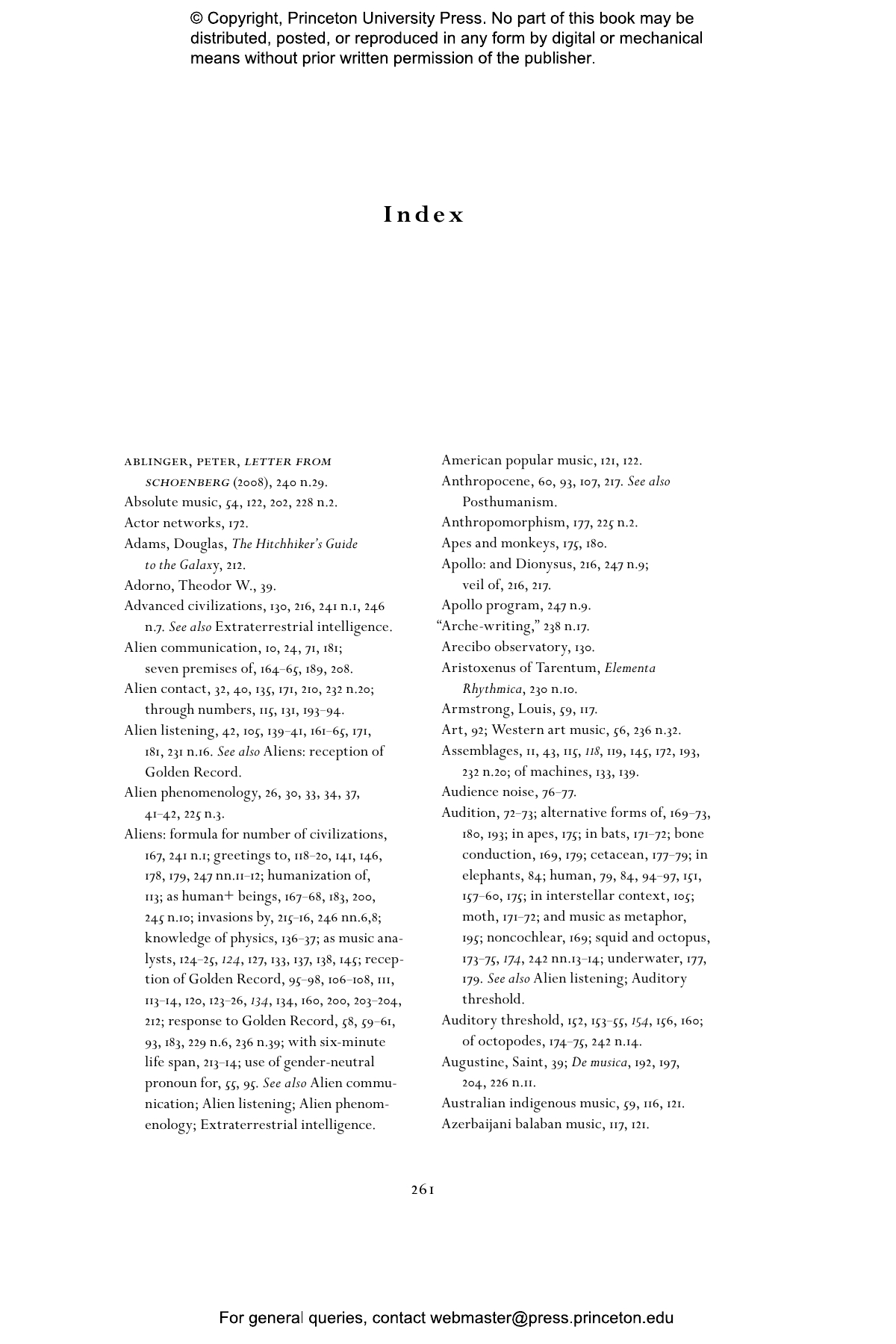 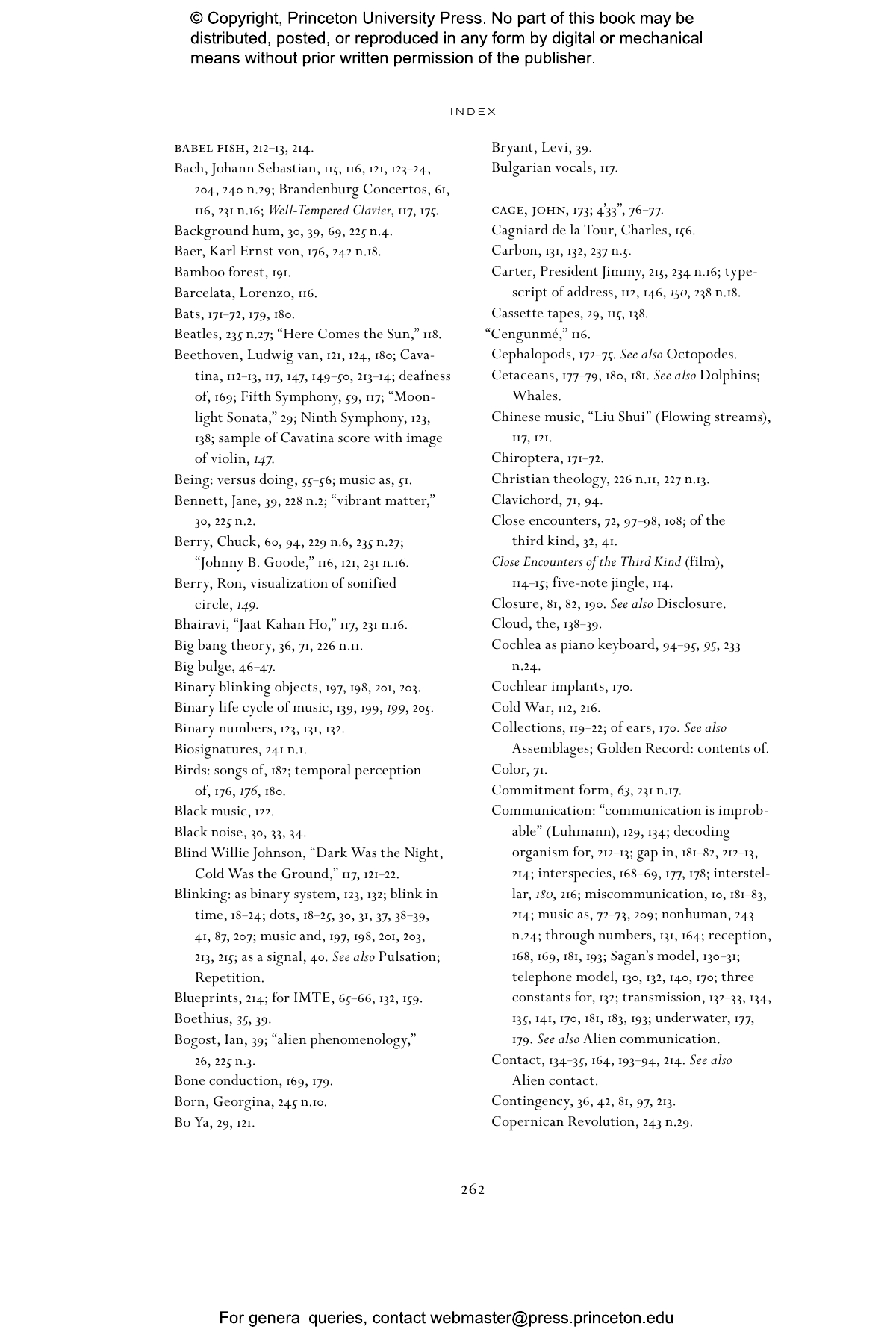 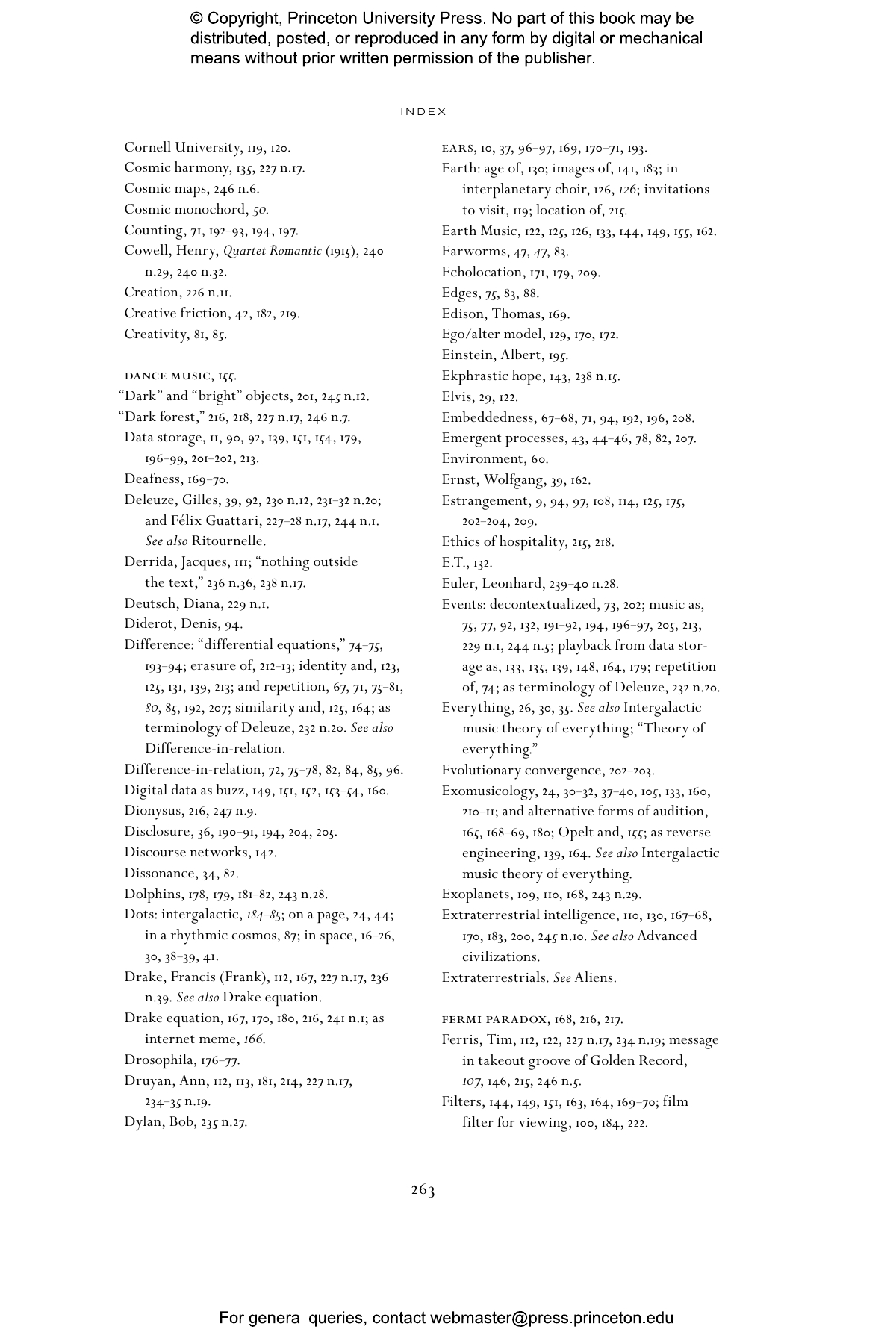 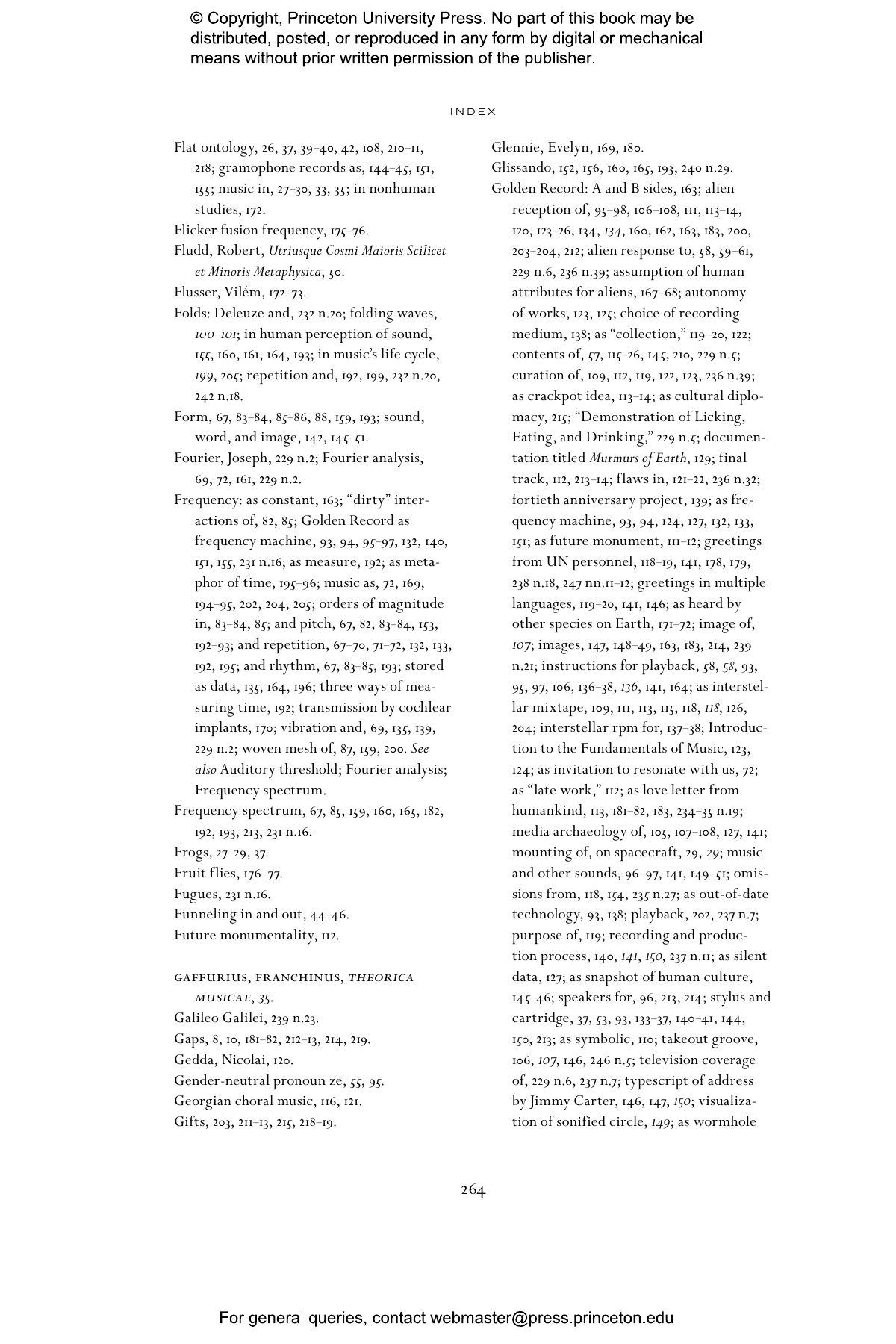 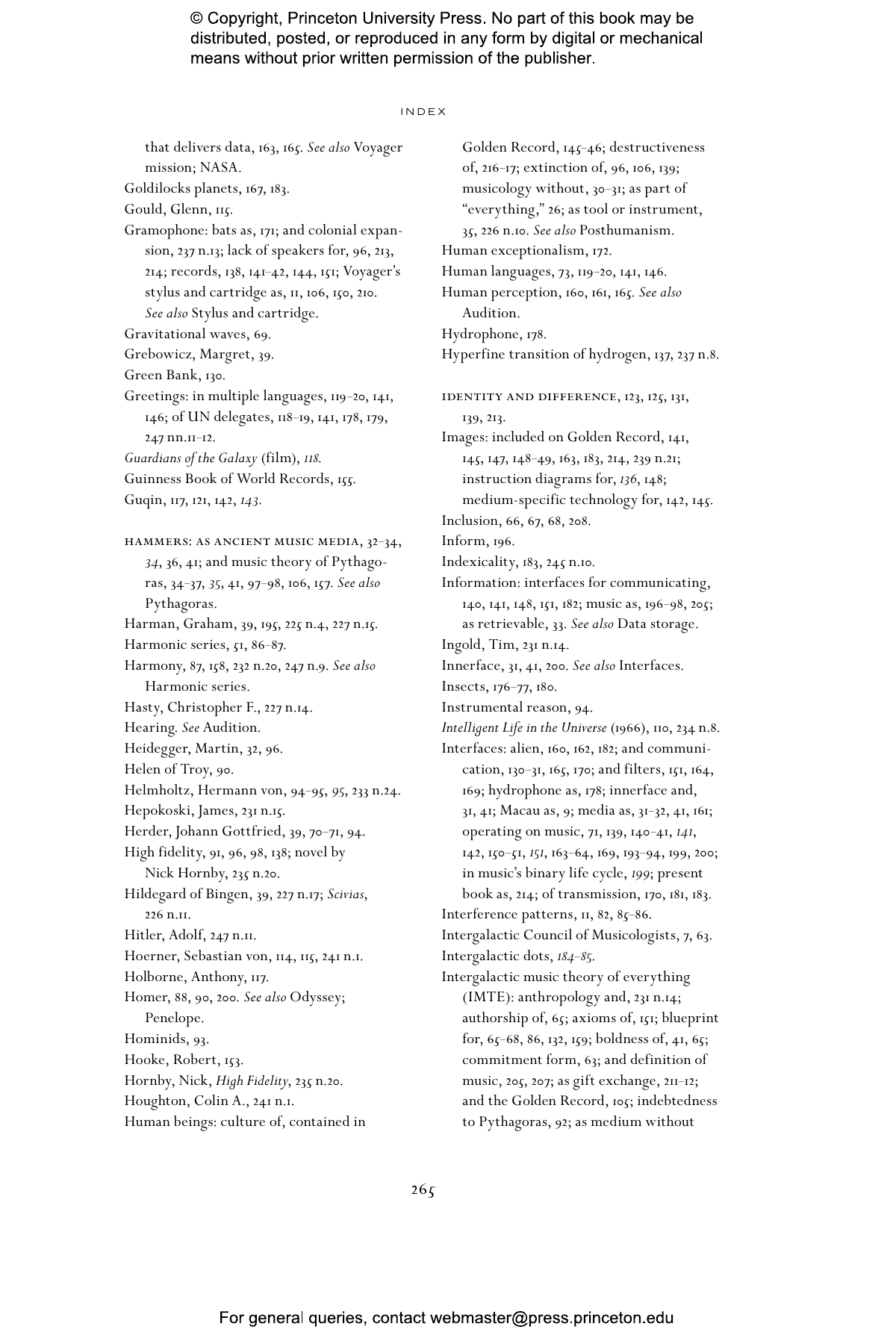 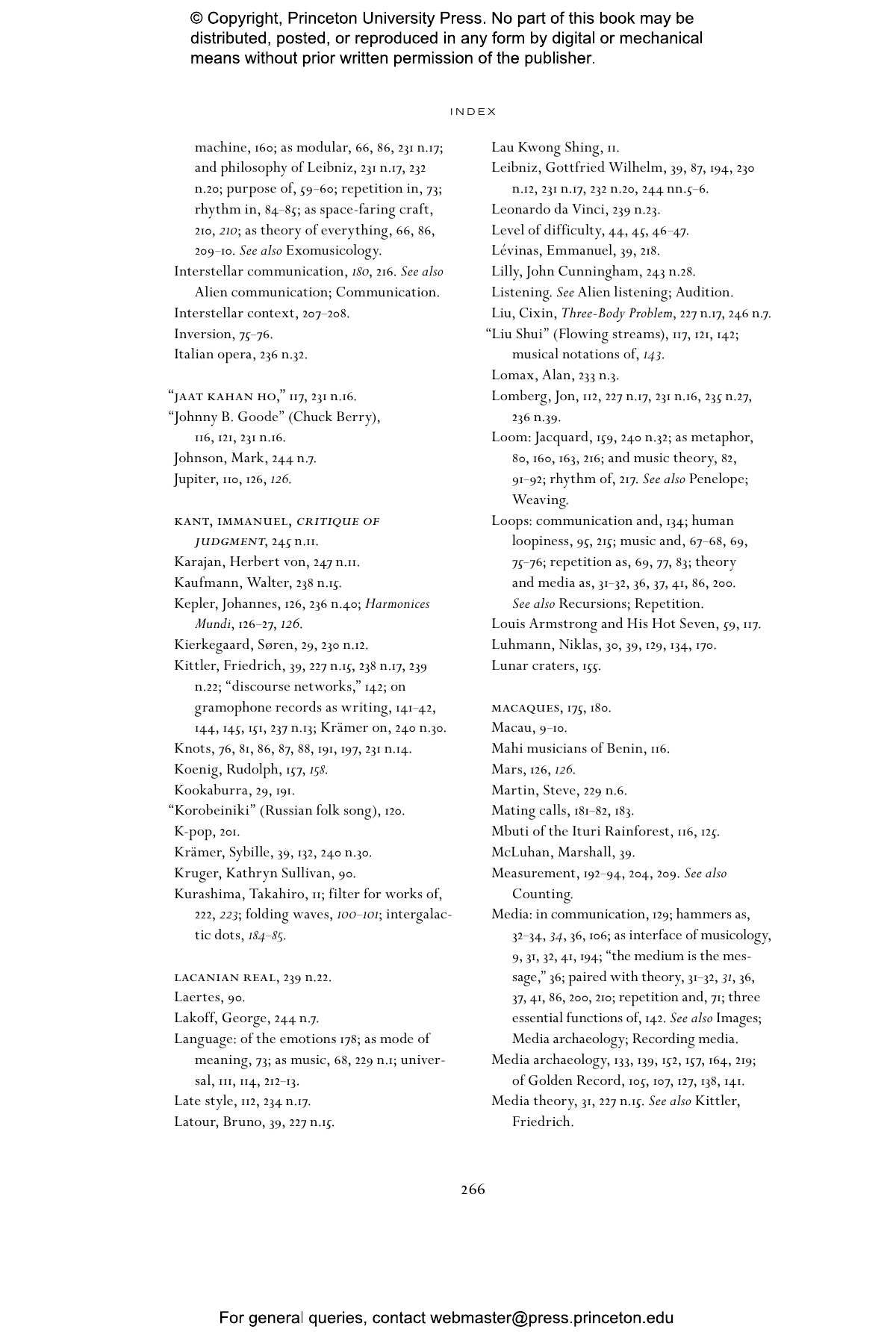 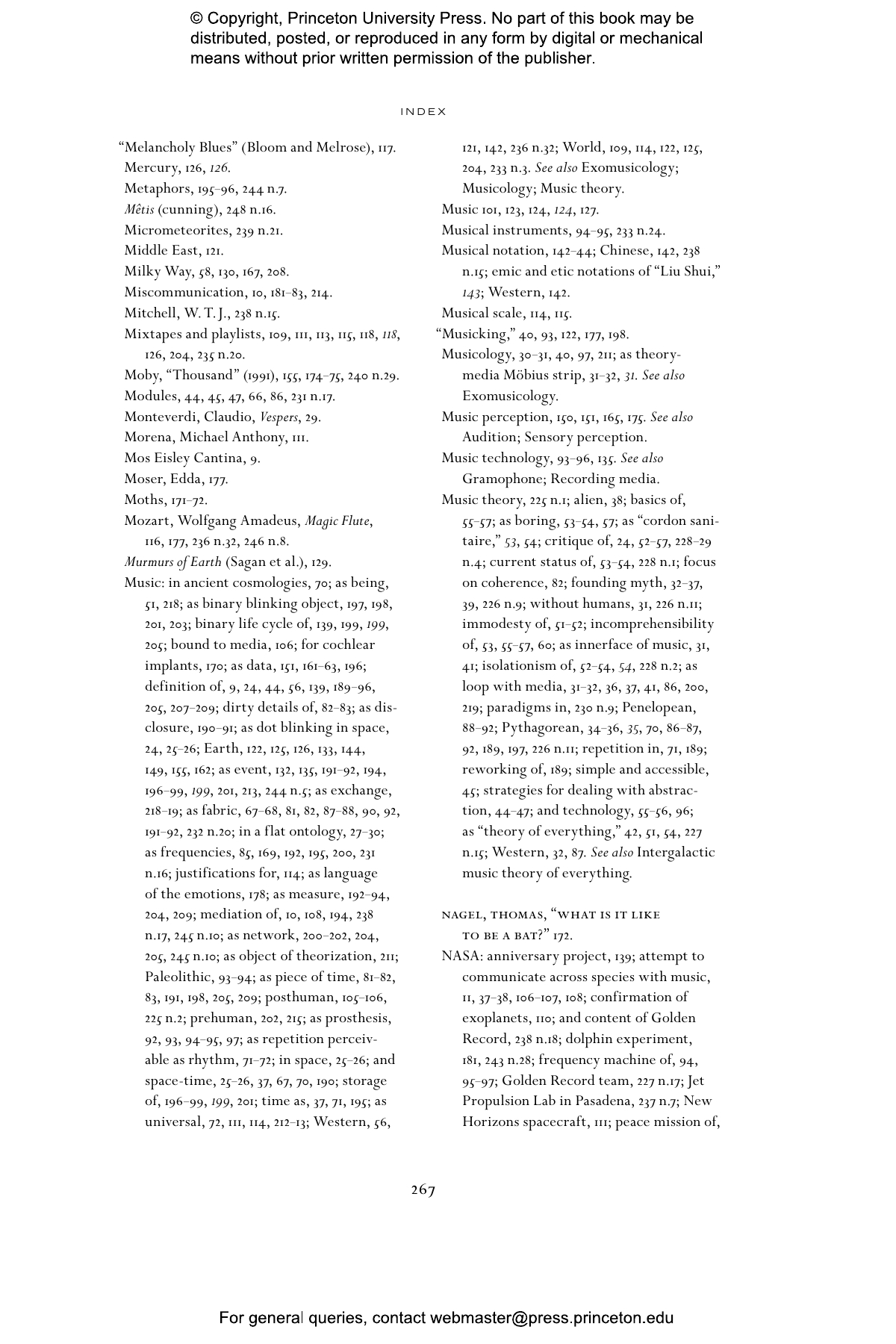 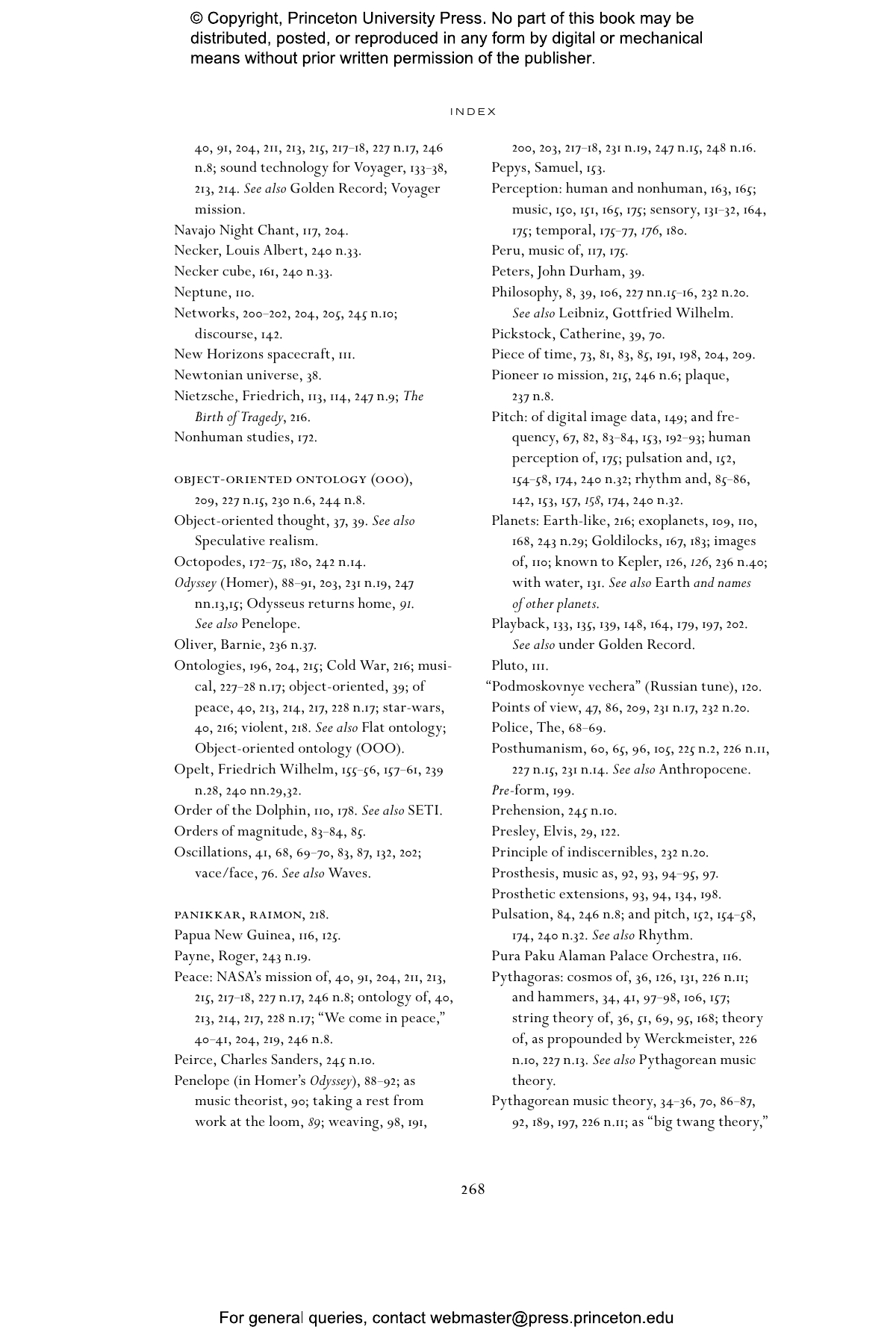 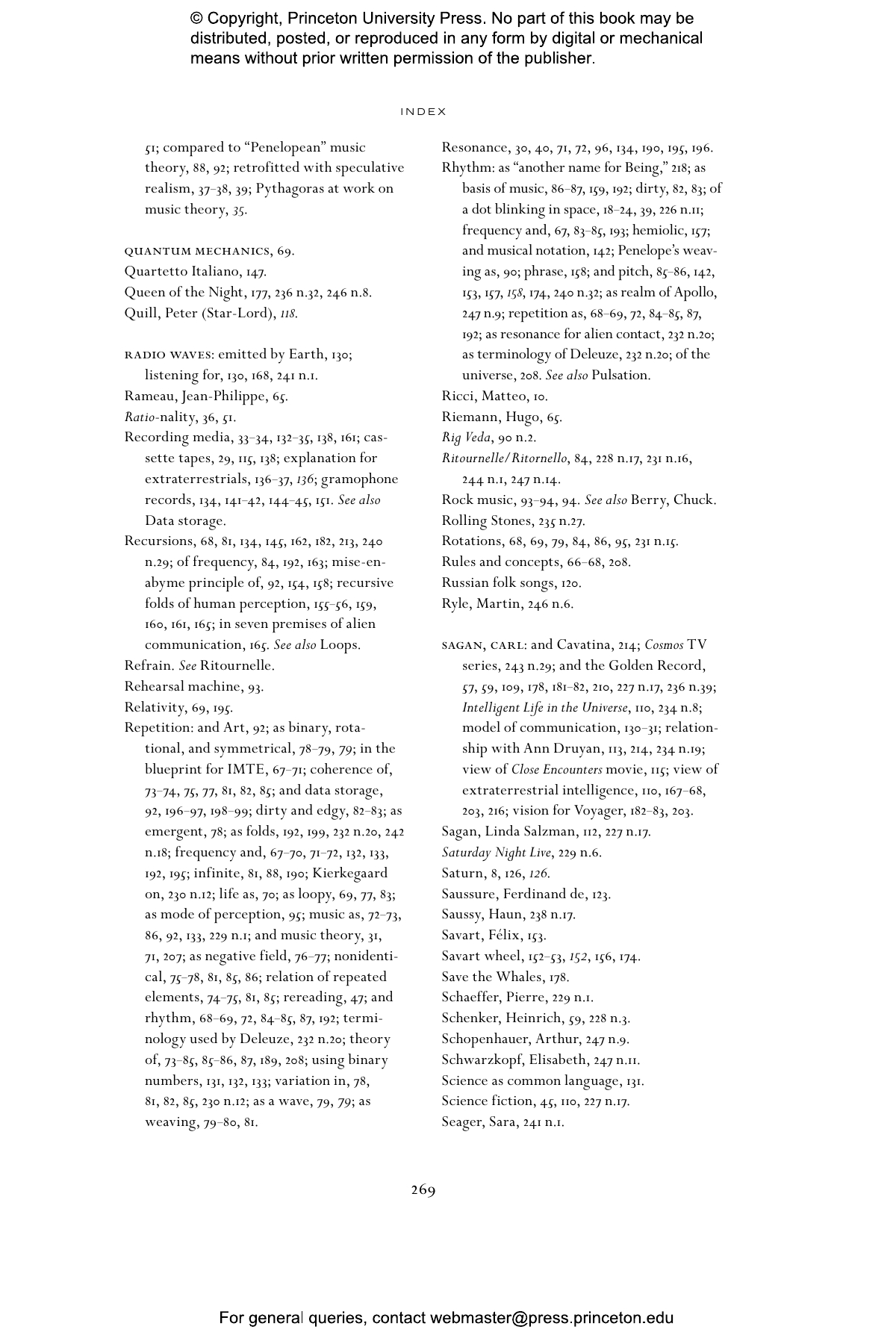 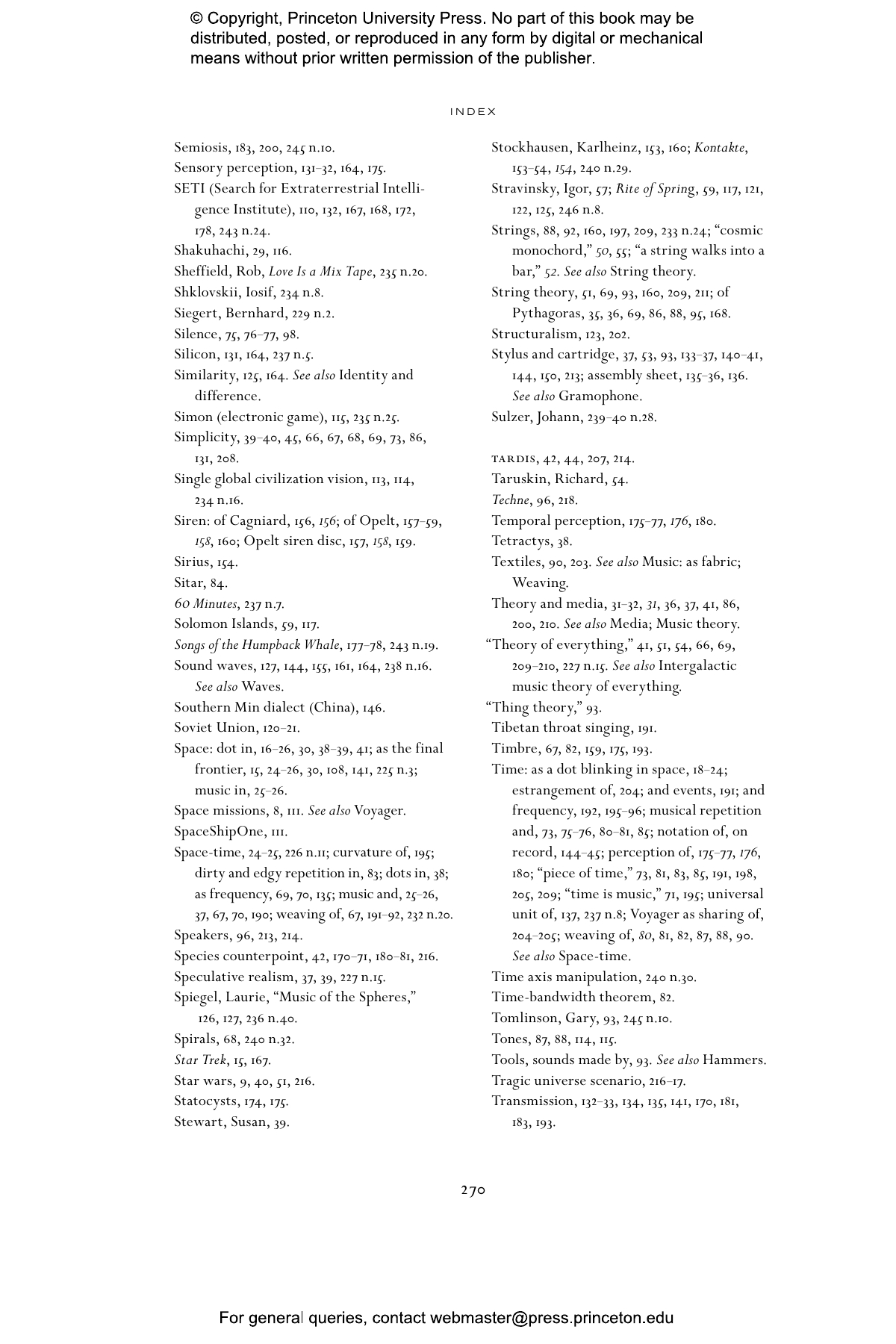 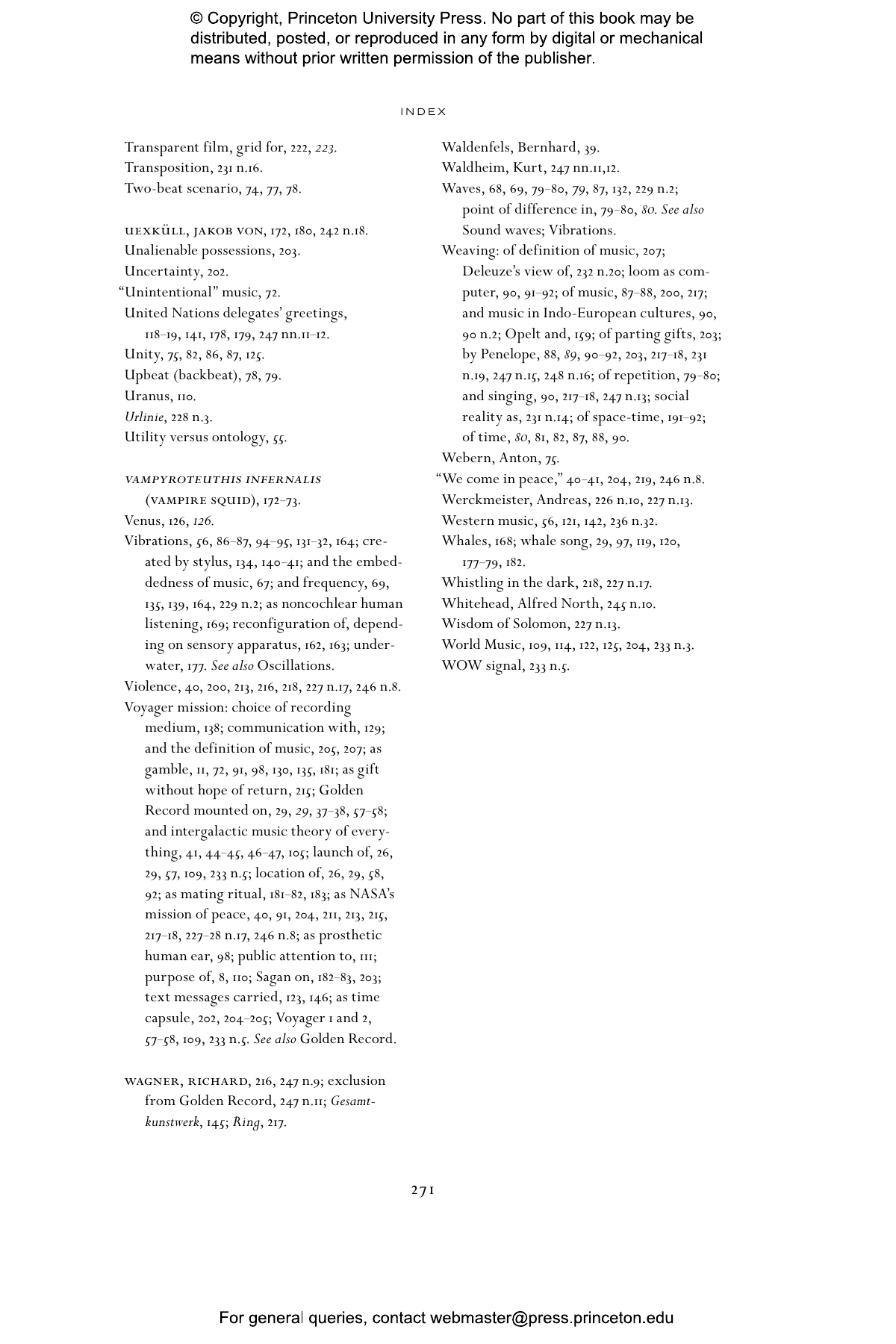 An examination of NASA's Golden Record that offers new perspectives and theories on how music can be analyzed, listened to, and thought about—by aliens and humans alike. 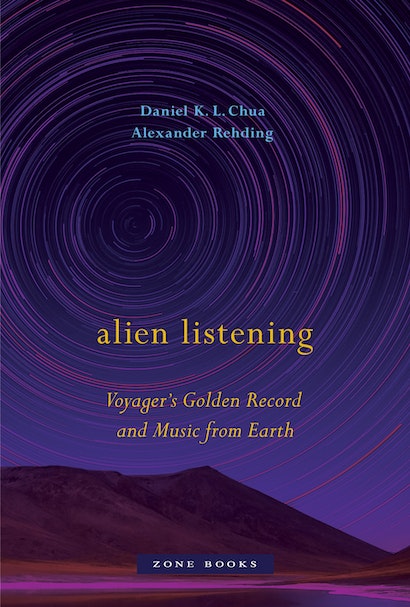 In 1977 NASA shot a mixtape into outer space. The Golden Record aboard the Voyager spacecrafts contained world music and sounds of Earth to represent humanity to any extraterrestrial civilizations. To date, the Golden Record is the only human-made object to have left the solar system. Alien Listening asks the big questions that the Golden Record raises: Can music live up to its reputation as the universal language in communications with the unknown? How do we fit all of human culture into a time capsule that will barrel through space for tens of thousands of years? And last but not least: Do aliens have ears?

The stakes could hardly be greater. Around the extreme scenario of the Golden Record, Chua and Rehding develop a thought-provoking, philosophically heterodox, and often humorous Intergalactic Music Theory of Everything, a string theory of communication, an object-oriented ontology of sound, and a Penelopean model woven together from strands of music and media theory. The significance of this exomusicology, like that of the Golden Record, ultimately takes us back to Earth and its denizens. By confronting the vast temporal and spatial distances the Golden Record traverses, the authors take listeners out of their comfort zone and offer new perspectives in which music can be analyzed, listened to, and thought about—by aliens and humans alike.

“As much intellectual fun as Gödel, Escher, Bach, this book is a unique hybrid of music theory and bioastronomy, an engaging how-to manual especially for composers fluent in both Kierkegaard and Klingon. For the rest of us, an amusingly illustrated and mind-stretching discussion of our first interstellar playlist. ET music scholars are as likely to say ‘Send more Chua and Rehding’ as ‘Send more Chuck Berry.’ ”—Jon Lomberg, Design Director, Voyager Golden Record

“This book made me laugh out loud, and then reflect on my own place in the galaxy. While inhaling the authors' clear and elegant prose, I also showed anyone in my vicinity their genre-bending illustrations. Thinking about and listening to music will never be the same after reading this book! It would fit equally well in music theory, musicology, philosophy, and aesthetics curricula, and is a must-read for friends, neighbors, and aliens alike.”—Nina Eidsheim, University of California at Los Angeles, author of Sensing Sound: Singing and Listening as Vibrational Practice

“To boldly go where no one has gone and ask what might music be! This book undertakes this mission with glee, wit, and imaginative flair. In outer space, we recognize something we should have known: that music is always mediated, both archived in time and stretched in space, both cosmic and mundane, both uncanny and familiar. The aliens we meet might just be ourselves.”—John Peters, Yale University, author of The Marvelous Clouds: Toward a Philosophy of Elemental Media

“Alien Listening is at once monumental in its aspirations and effortless in its delivery. Exomusicology offers a new, otherworldly music theory that tarries with media and materiality, while also helping us to understand the limits—and therefore the possibilities—of human musicking. Chua and Rehding have produced something creative, challenging, and unlike any other book on music that I’ve read.”—Jonathan Sterne, McGill University, author of Diminished Faculties: A Political Phenomenology of Impairment

“Some of us have contemplated an exomusicology, but we lacked the boldness to pull it off—or, more to the point, we were looking for it in the wrong places. In this scintillating book, Chua and Rehding manage the feat not by imagining extraterrestrial worlds but by unleashing the alien in our-worldly music, then blasting it off into space. Along the way they leave Pythagorean, pitch-based music theory in the rocket exhaust, outstrip every materiality-of-music litany that has come along, and, framing a ‘Penelopean’ theory of music’s warp and weft, repetition and fold, restore music to a place at the heart of cosmic ontology. They have fun along the way, and so will the reader.”—Gary Tomlinson, Yale University, author of A Million Years of Music: The Emergence of Human Modernity