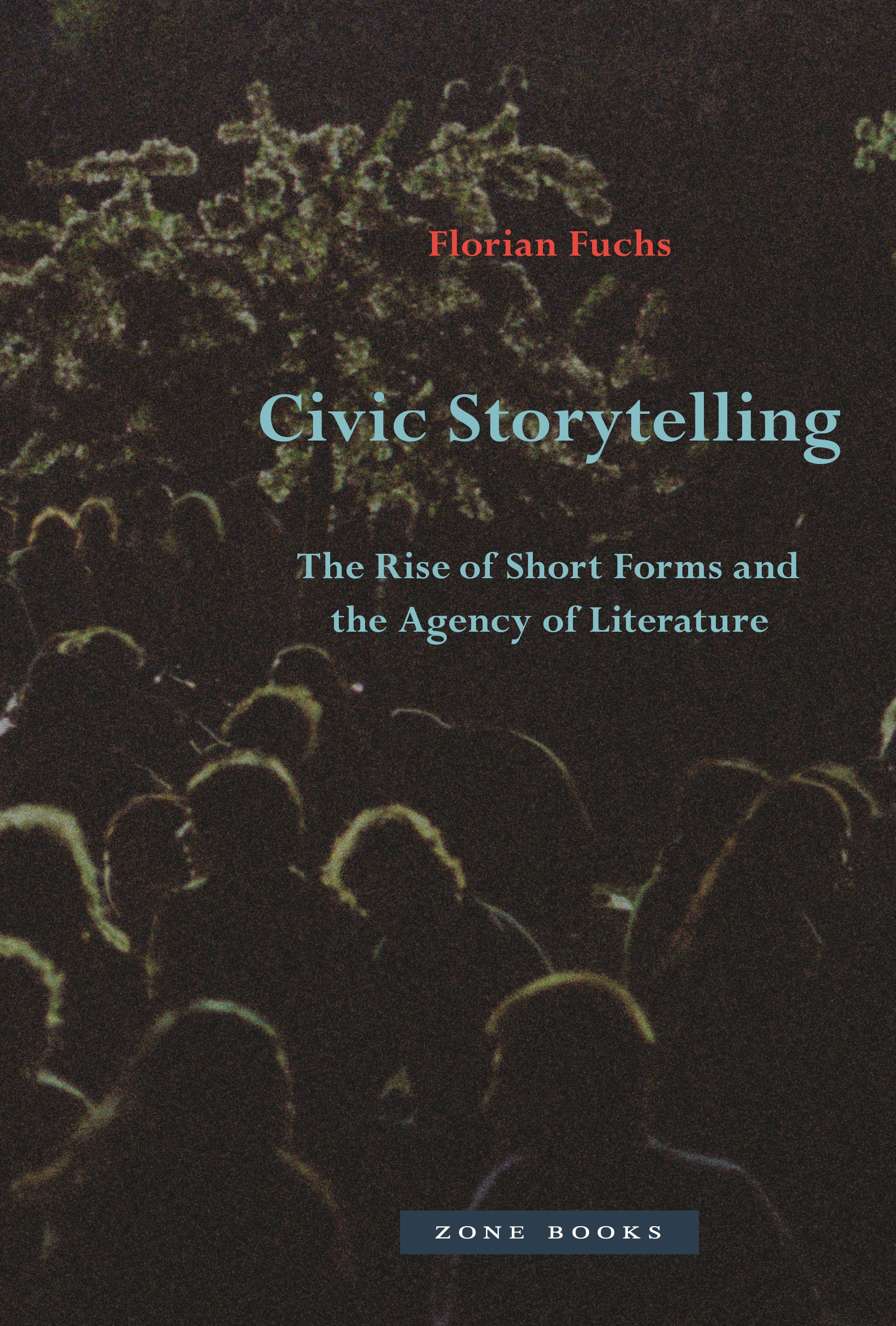 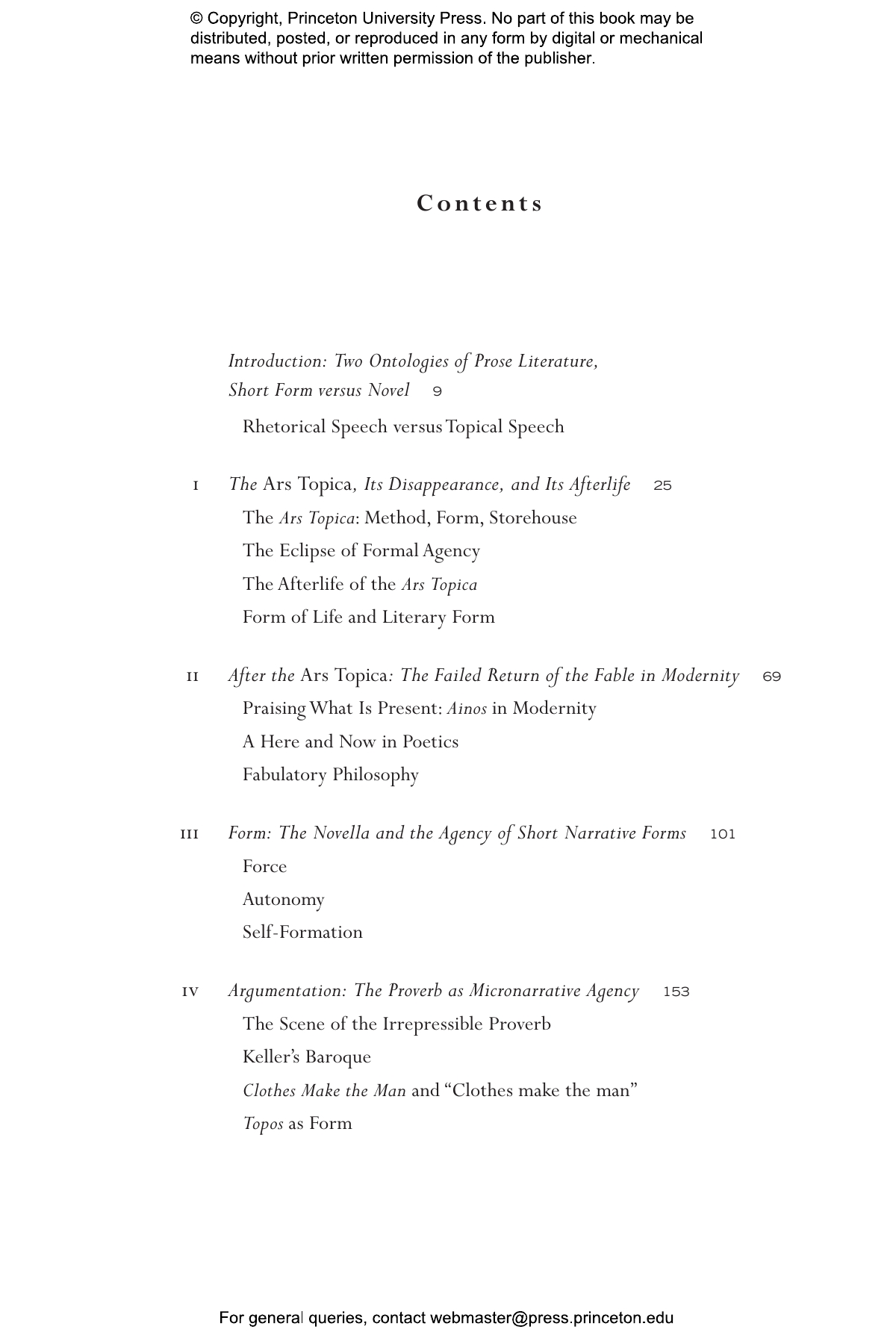 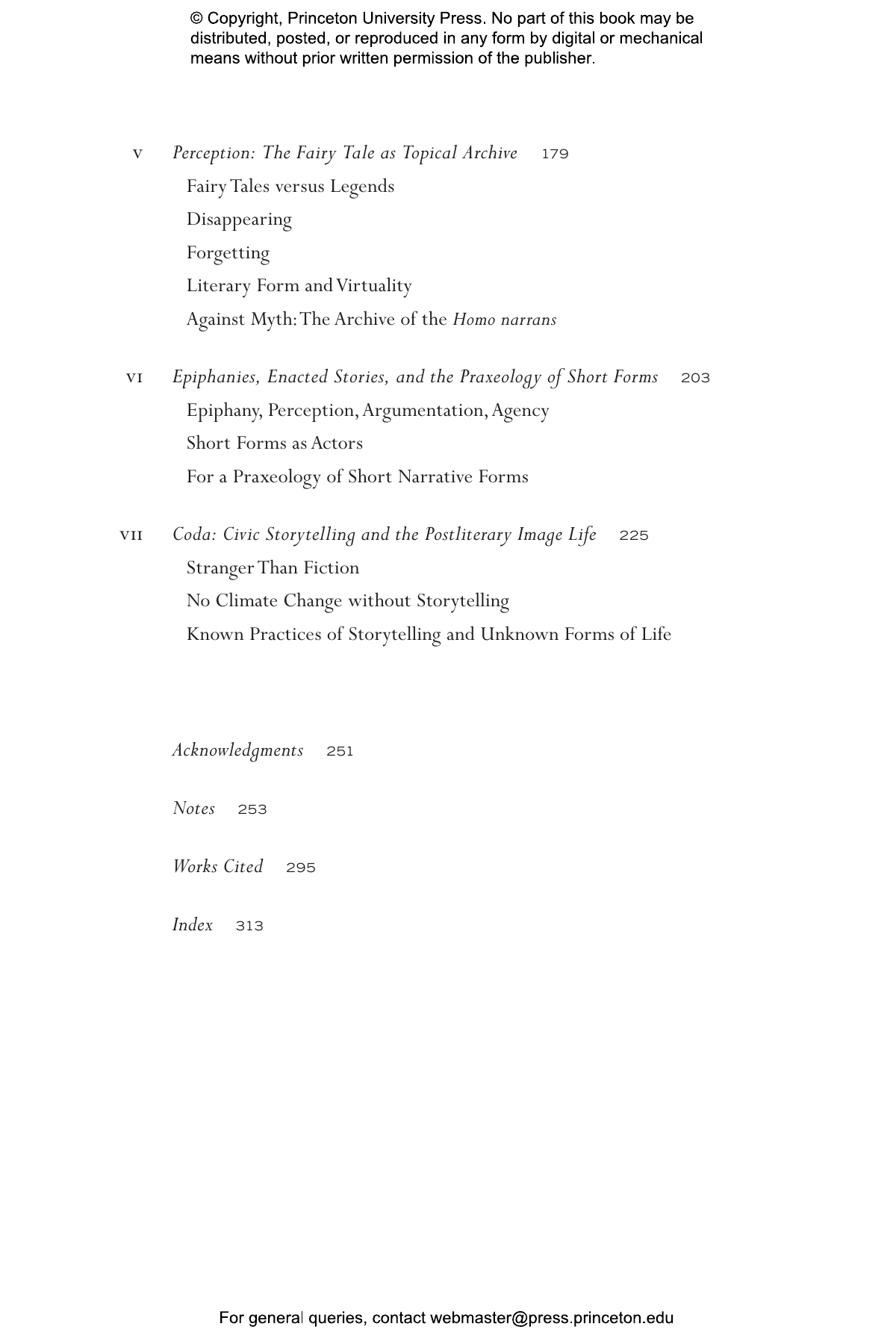 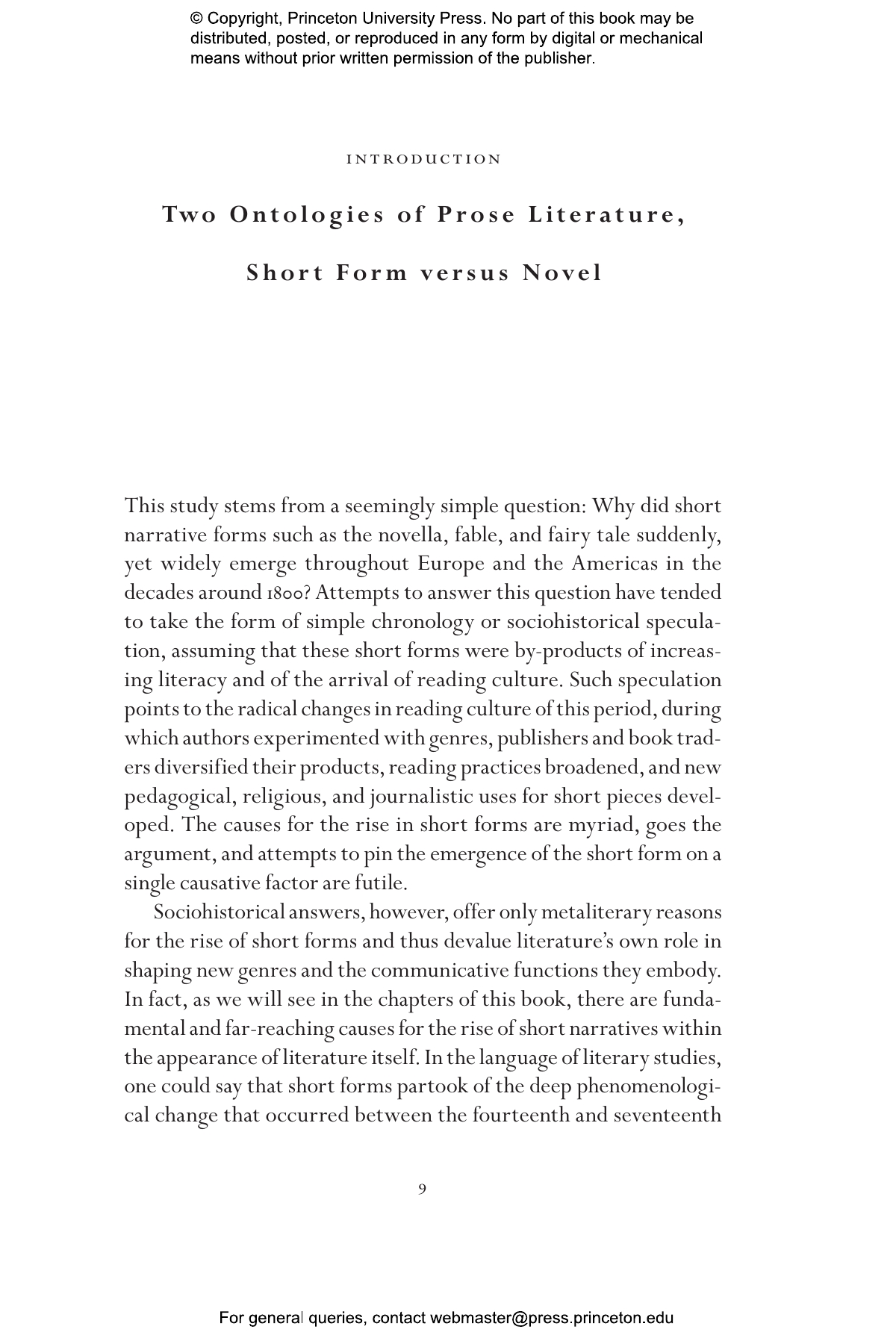 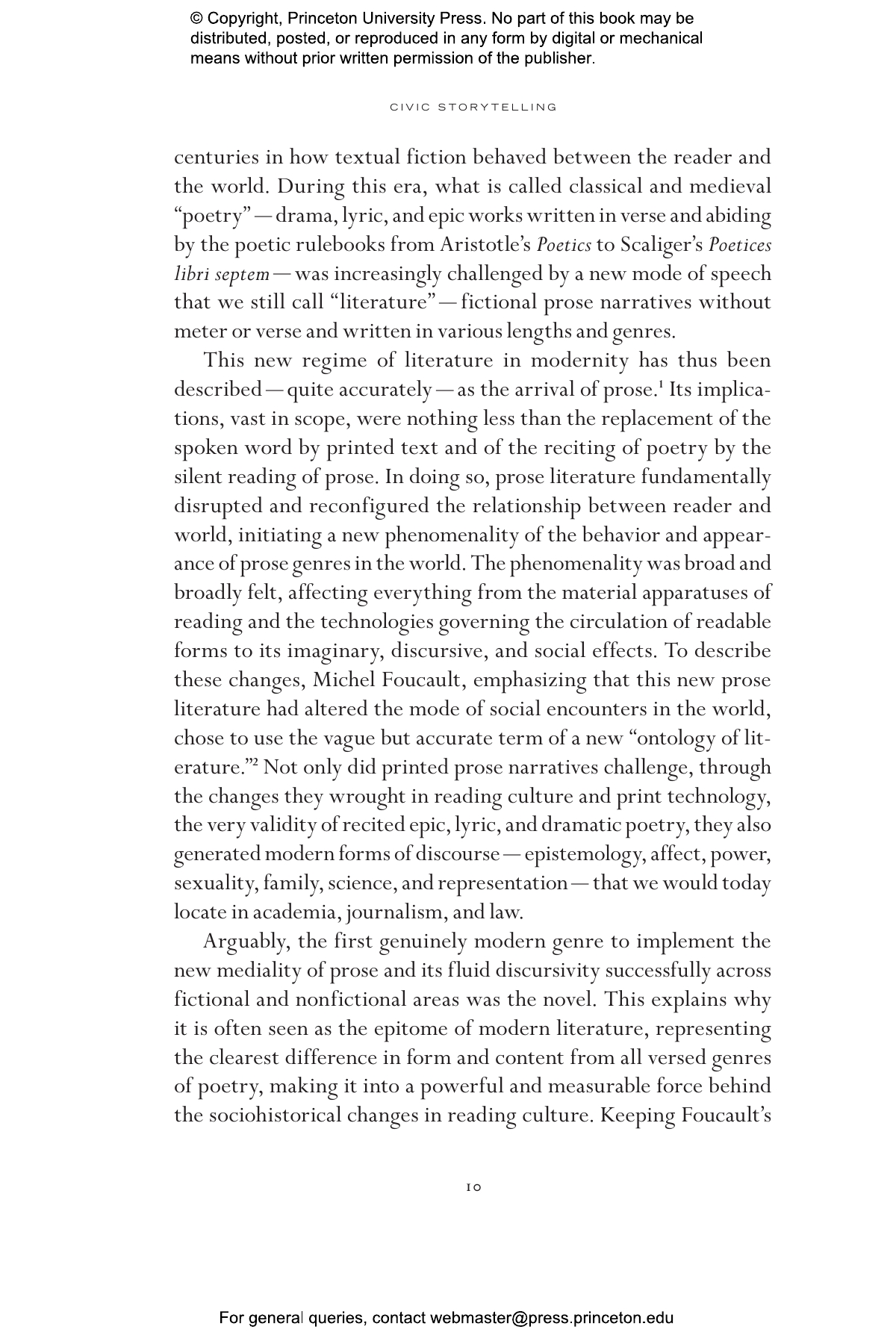 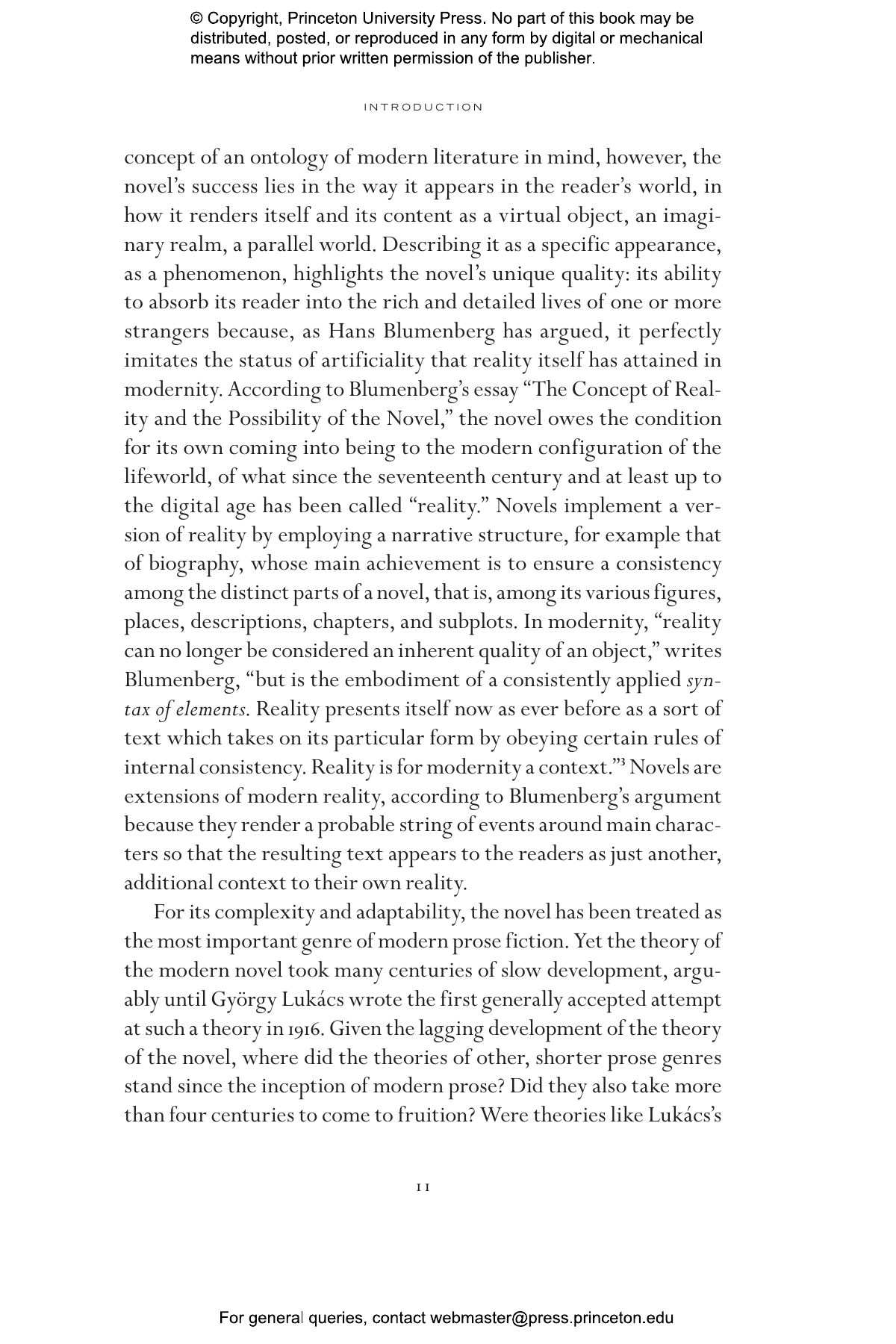 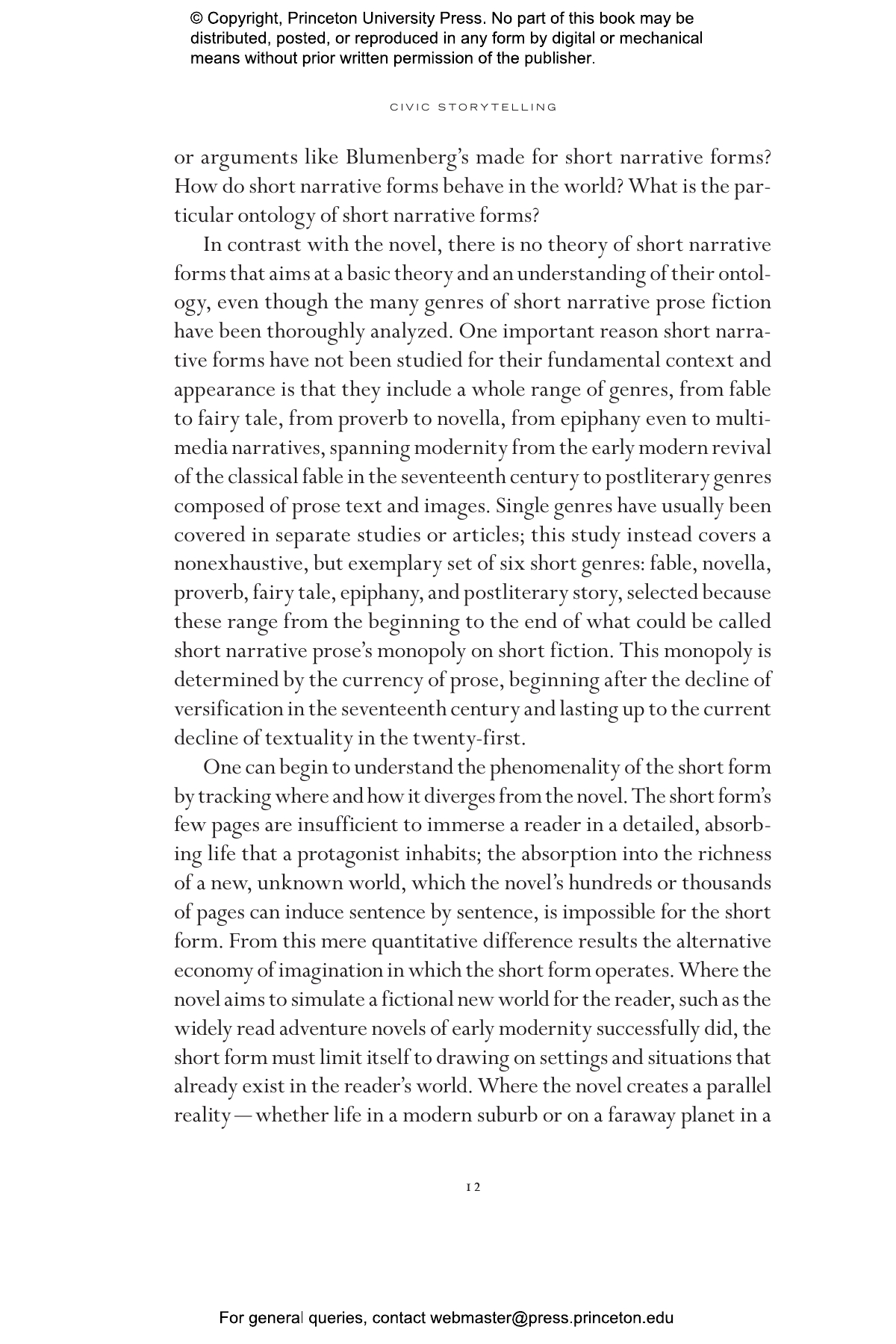 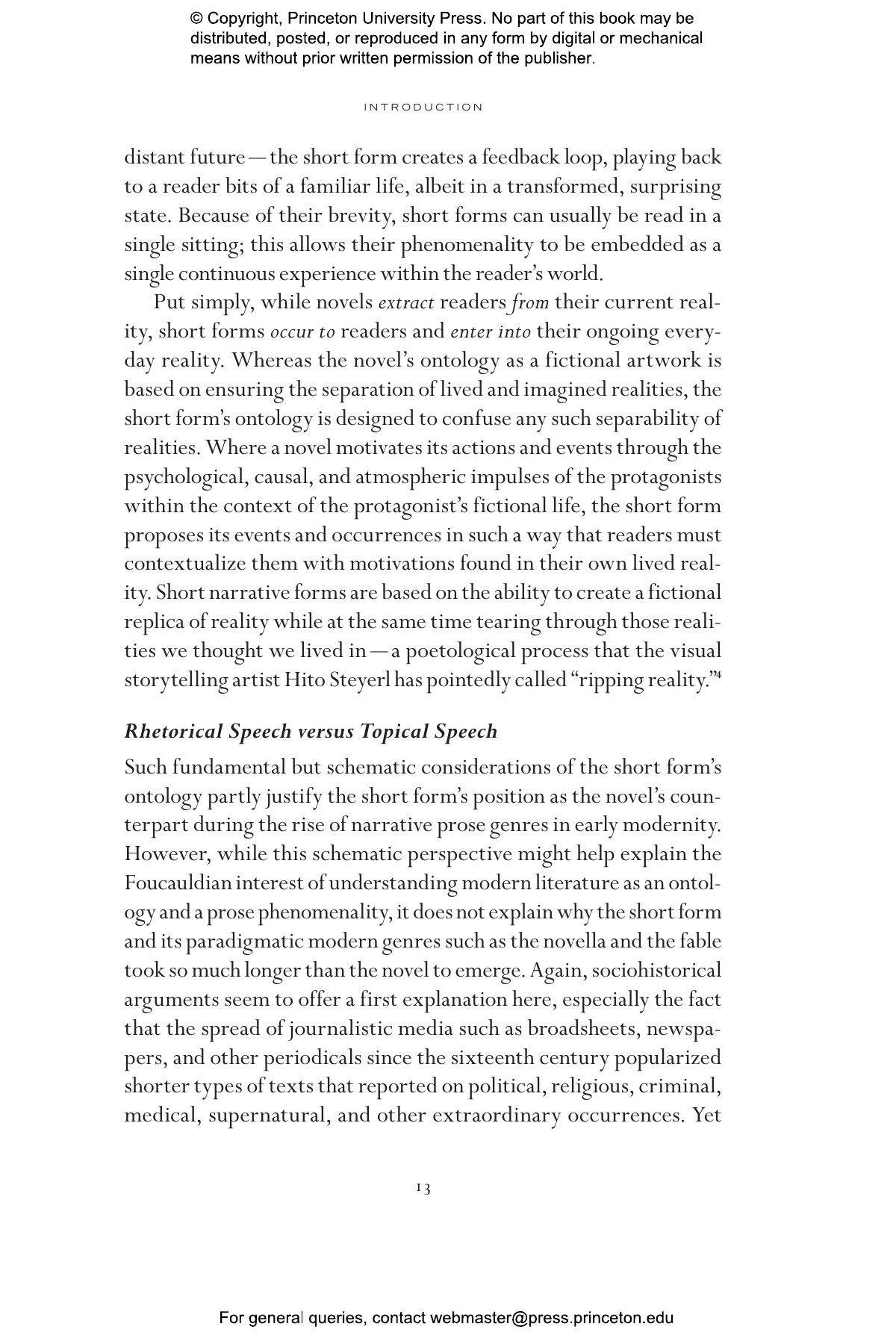 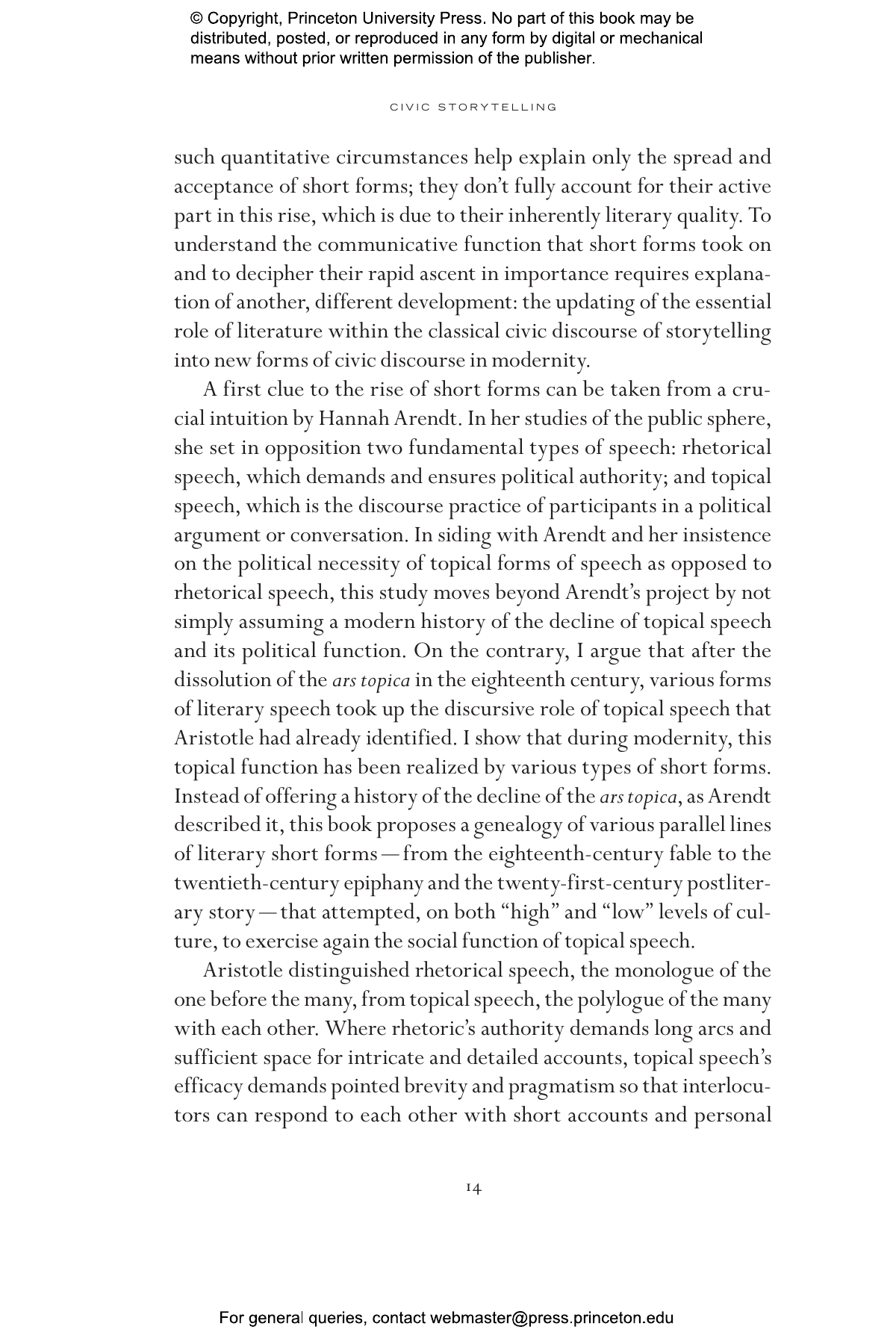 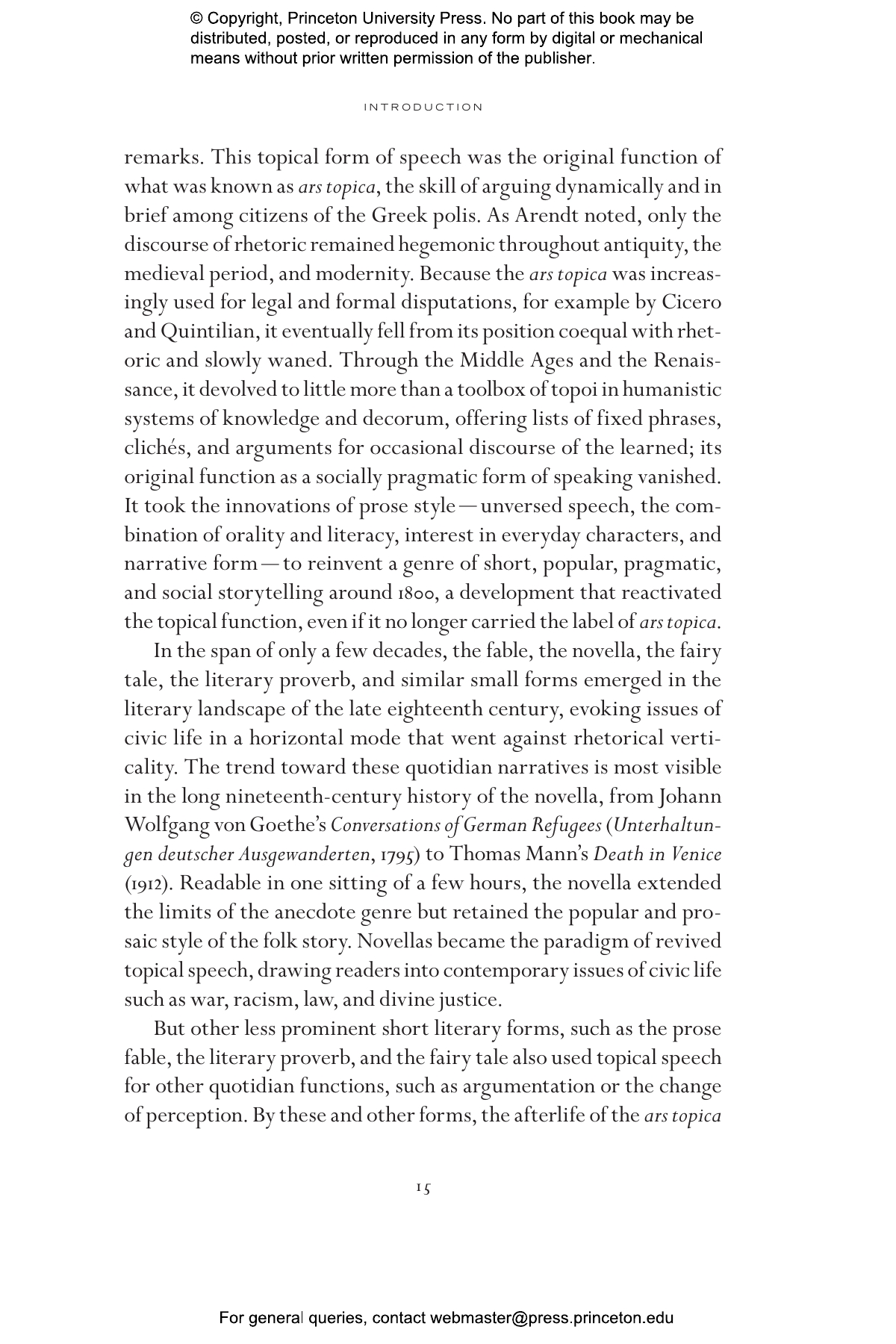 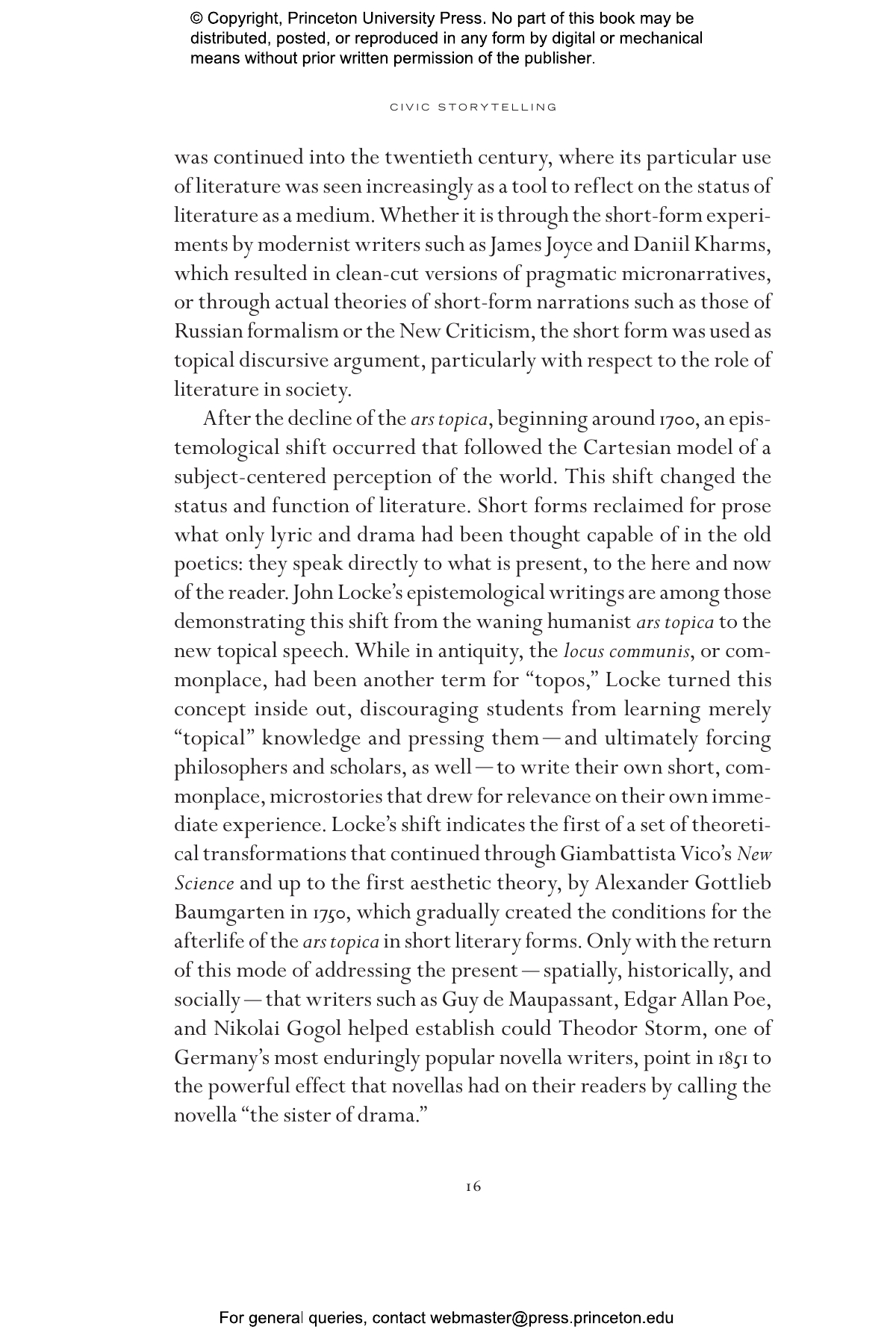 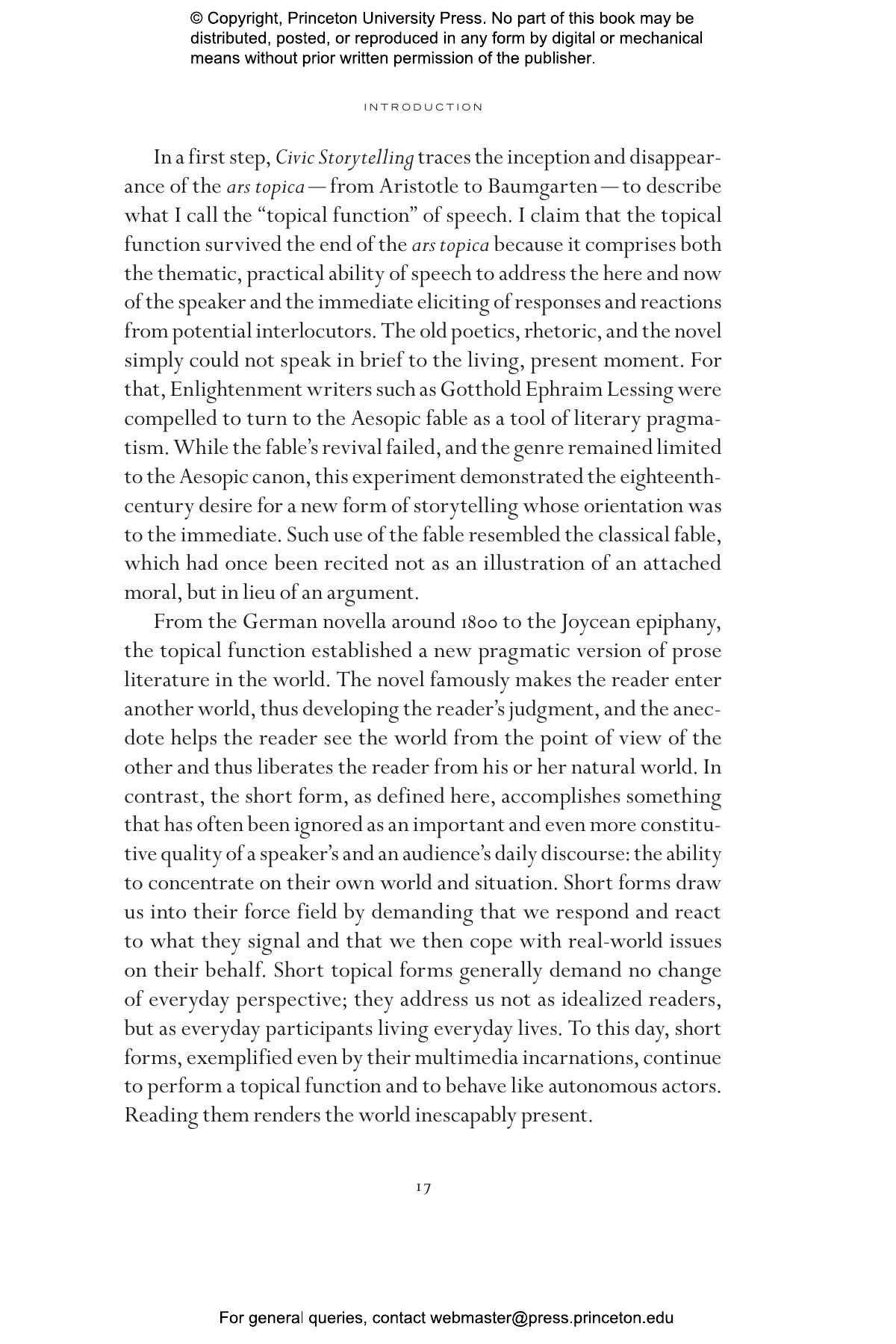 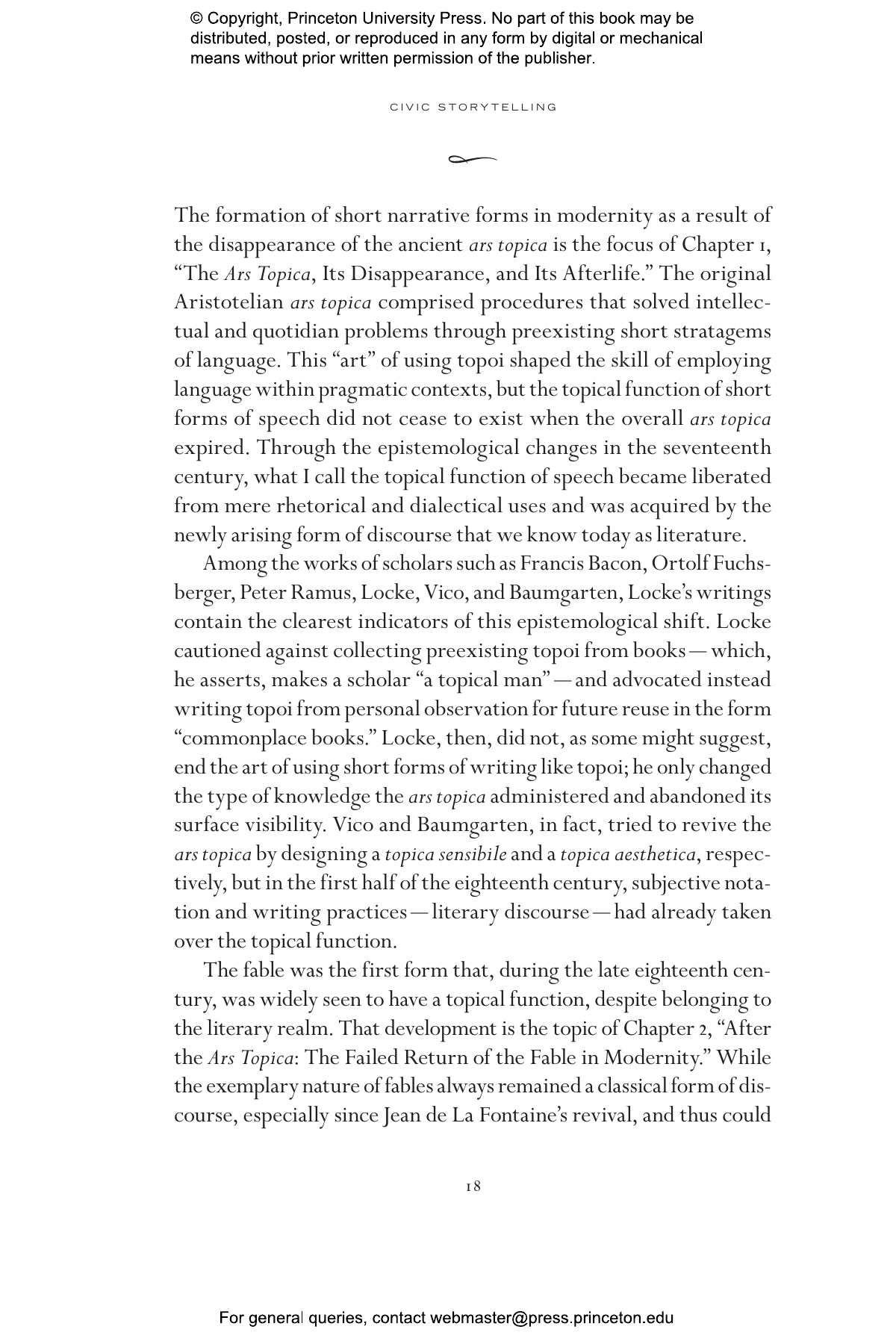 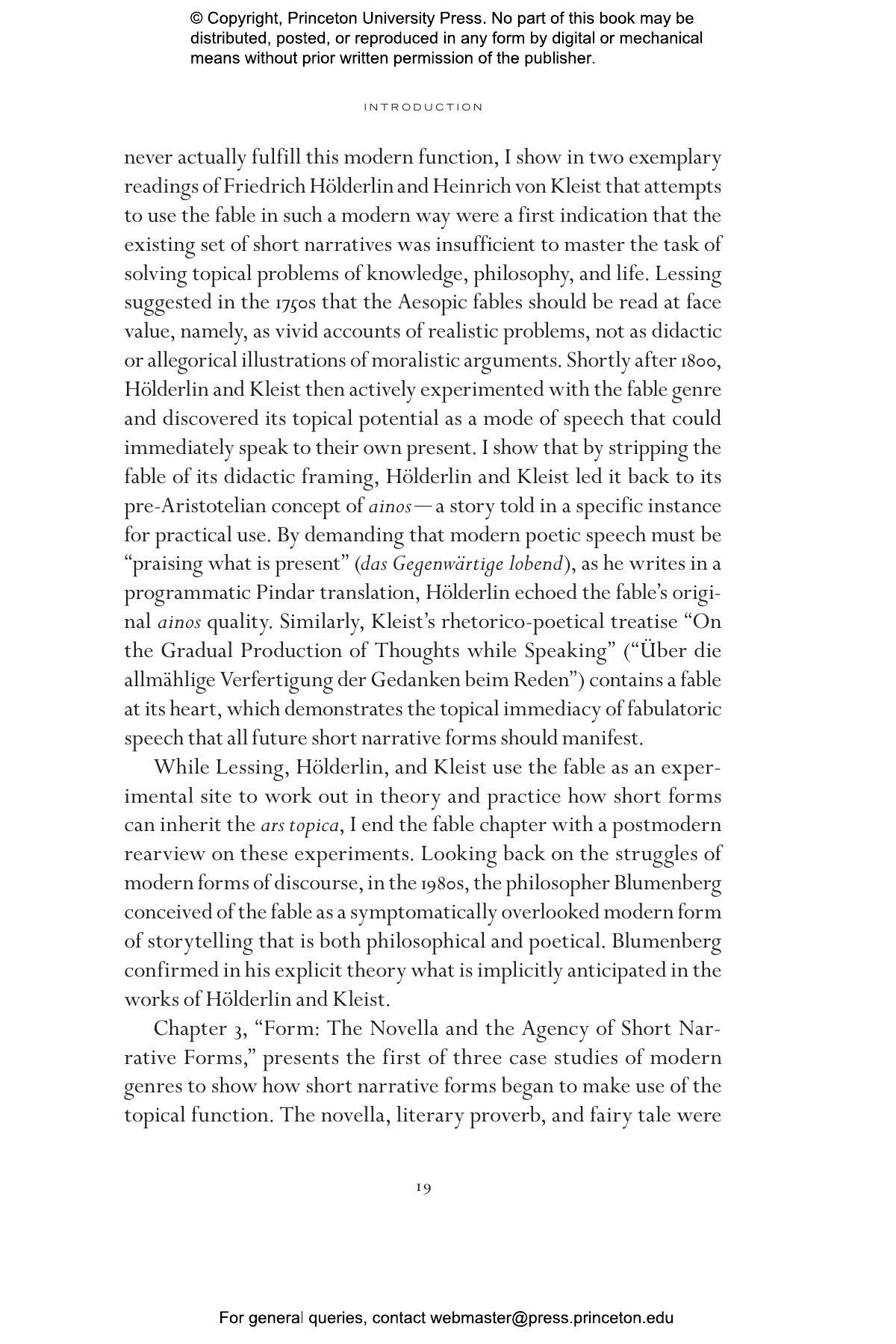 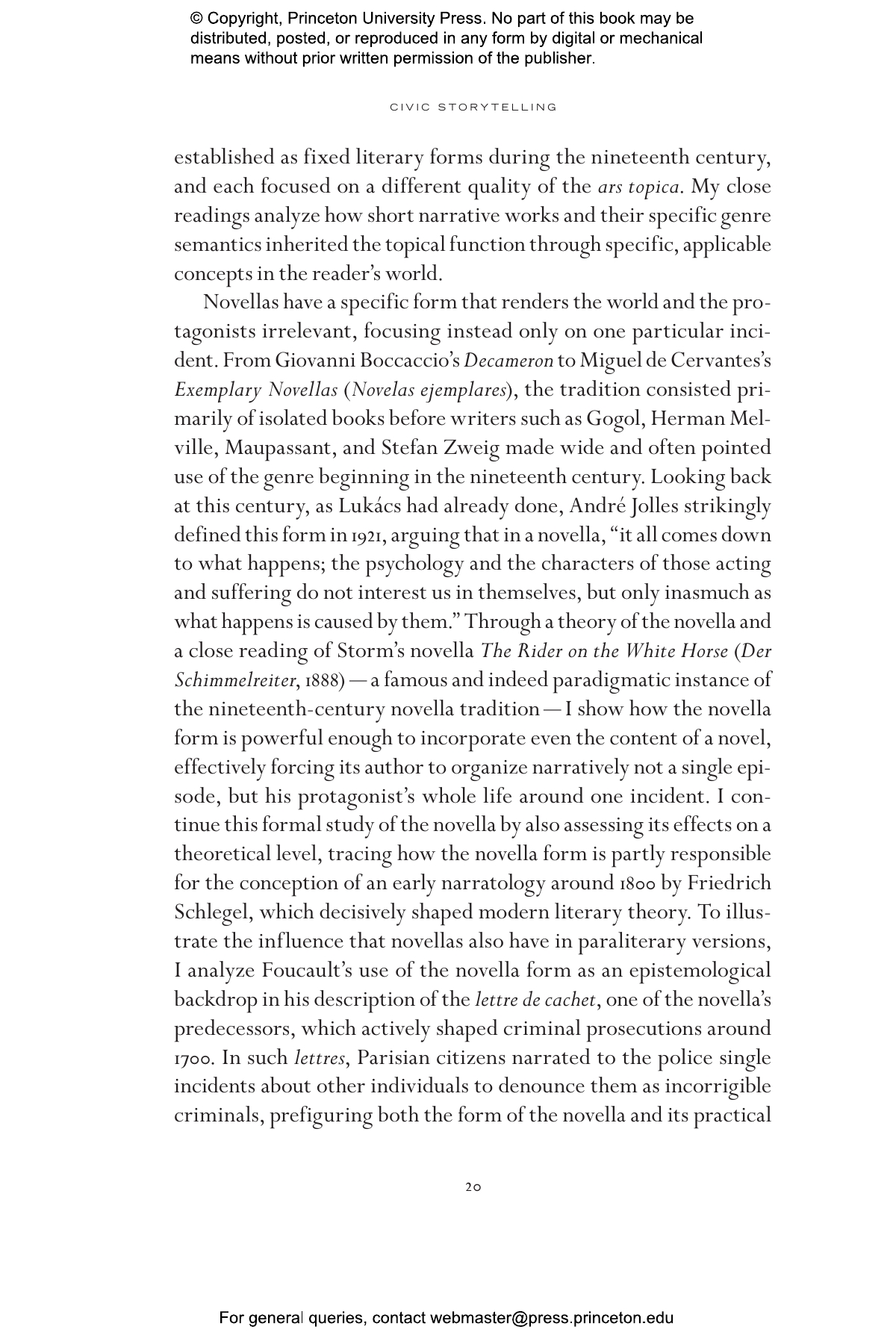 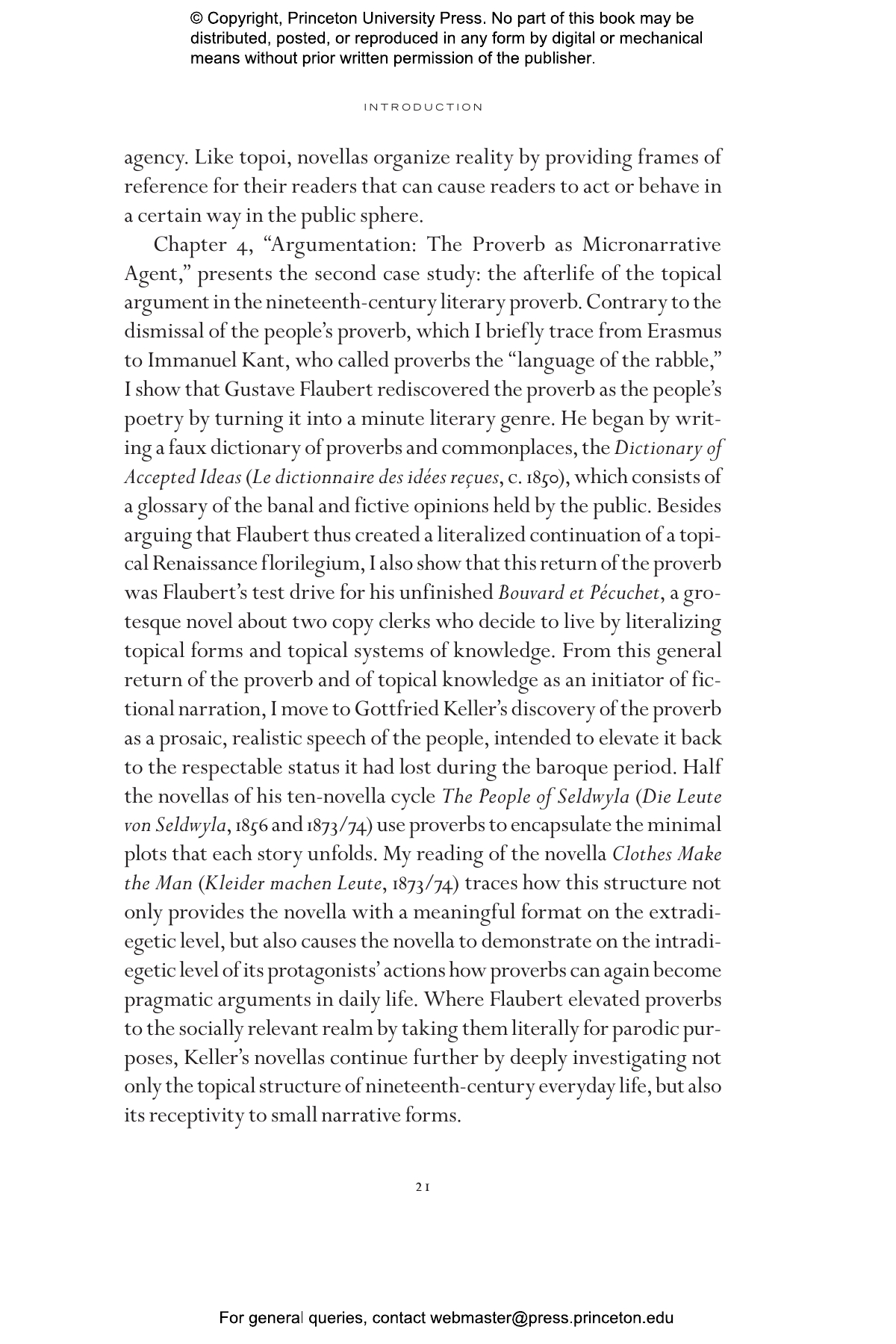 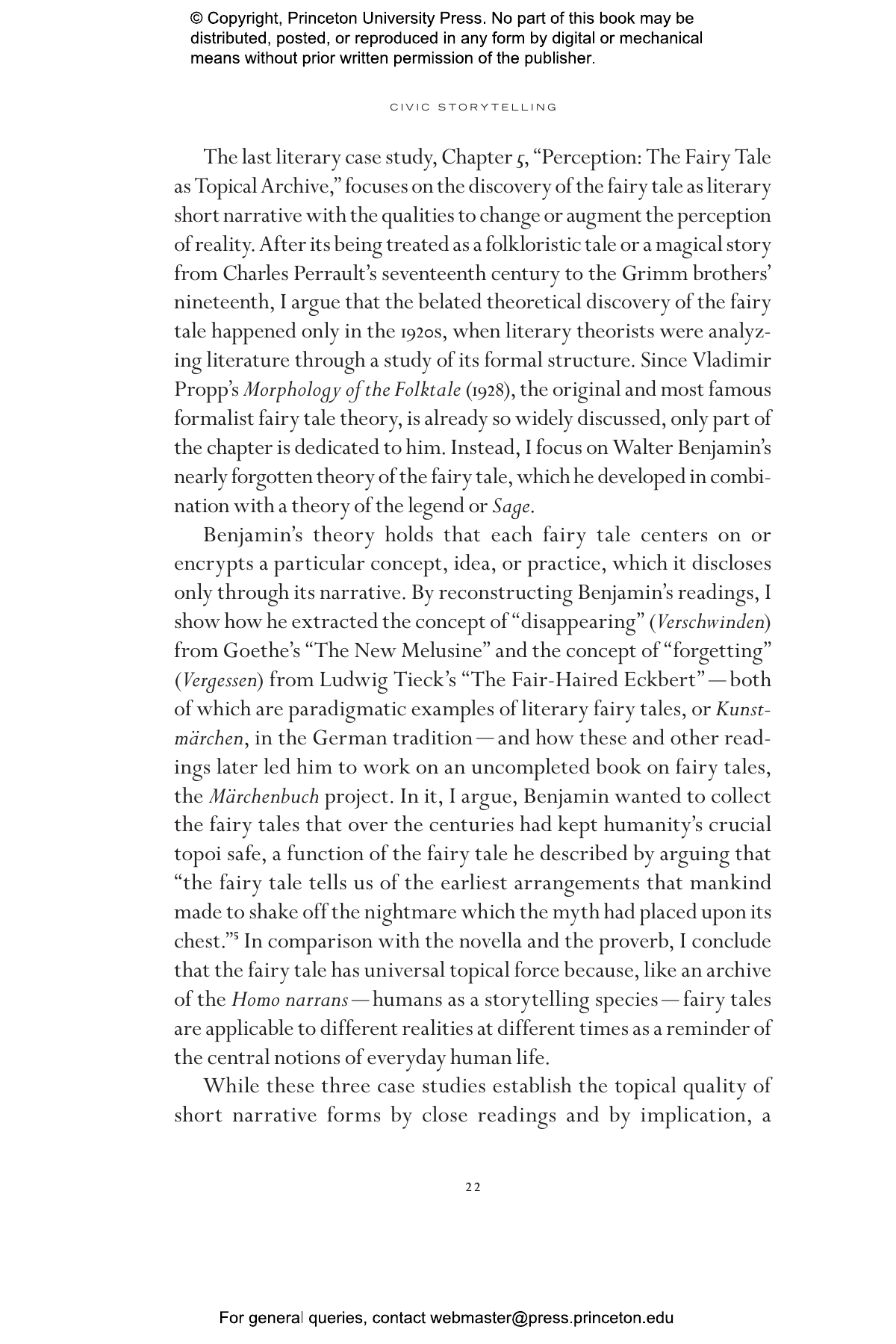 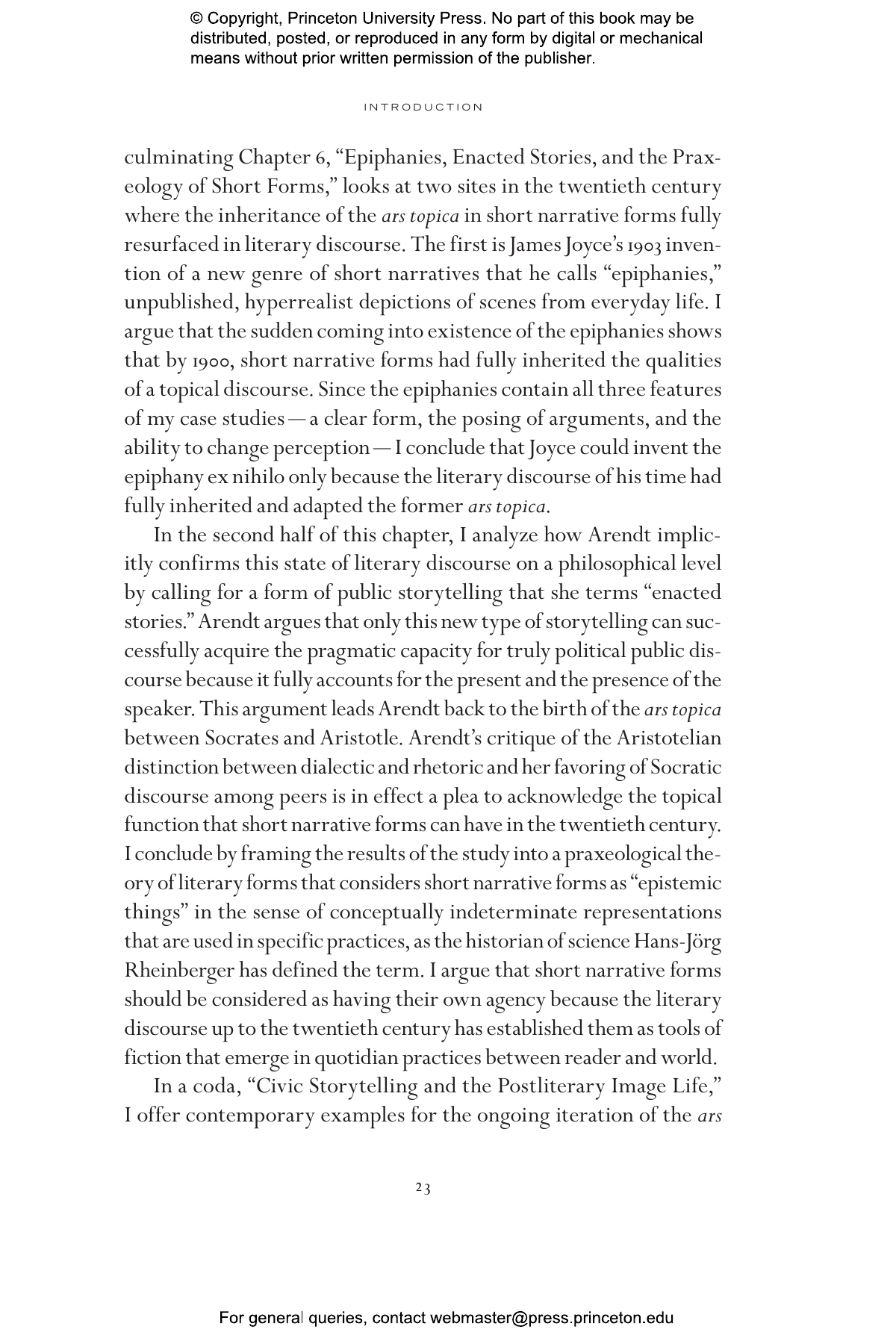 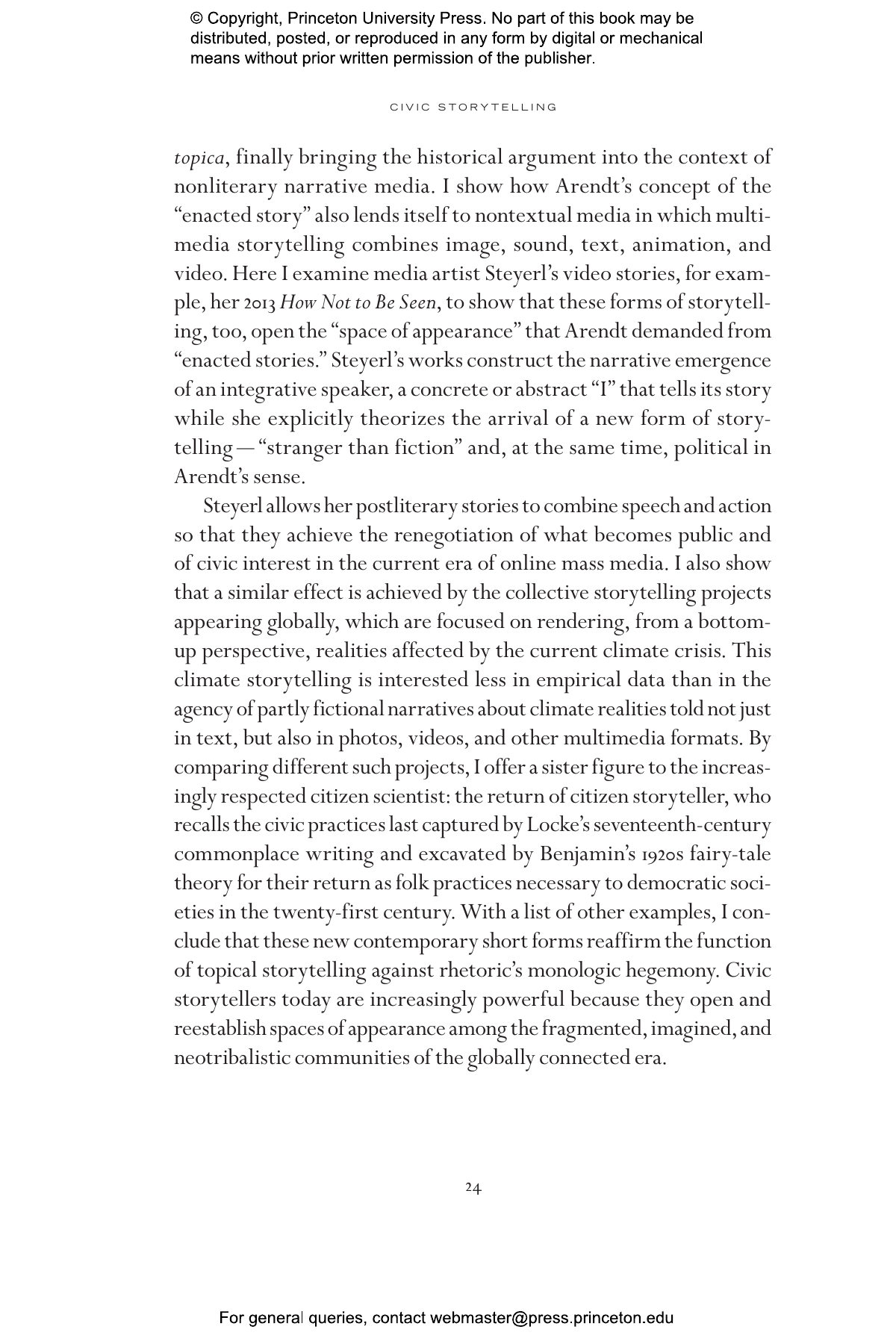 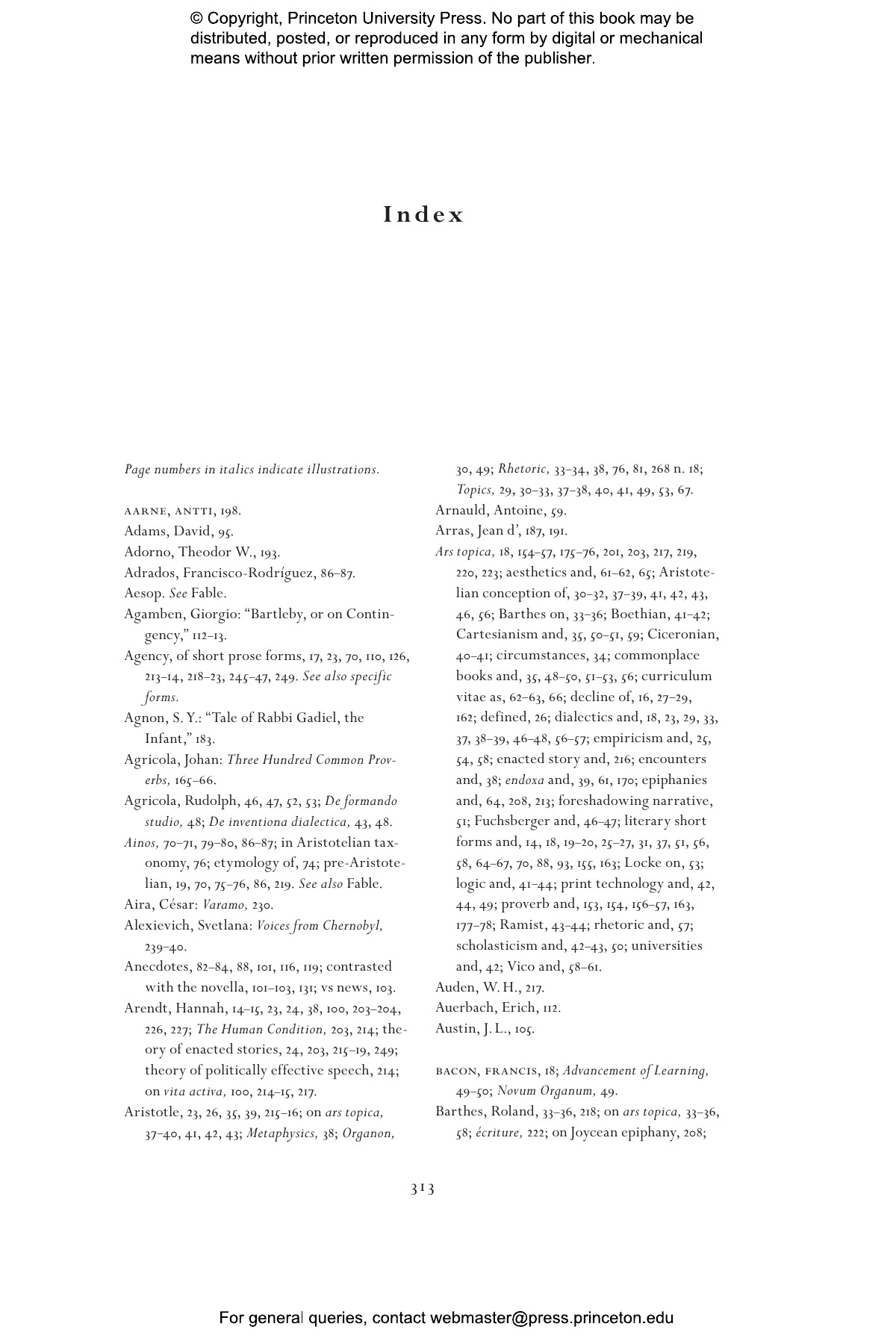 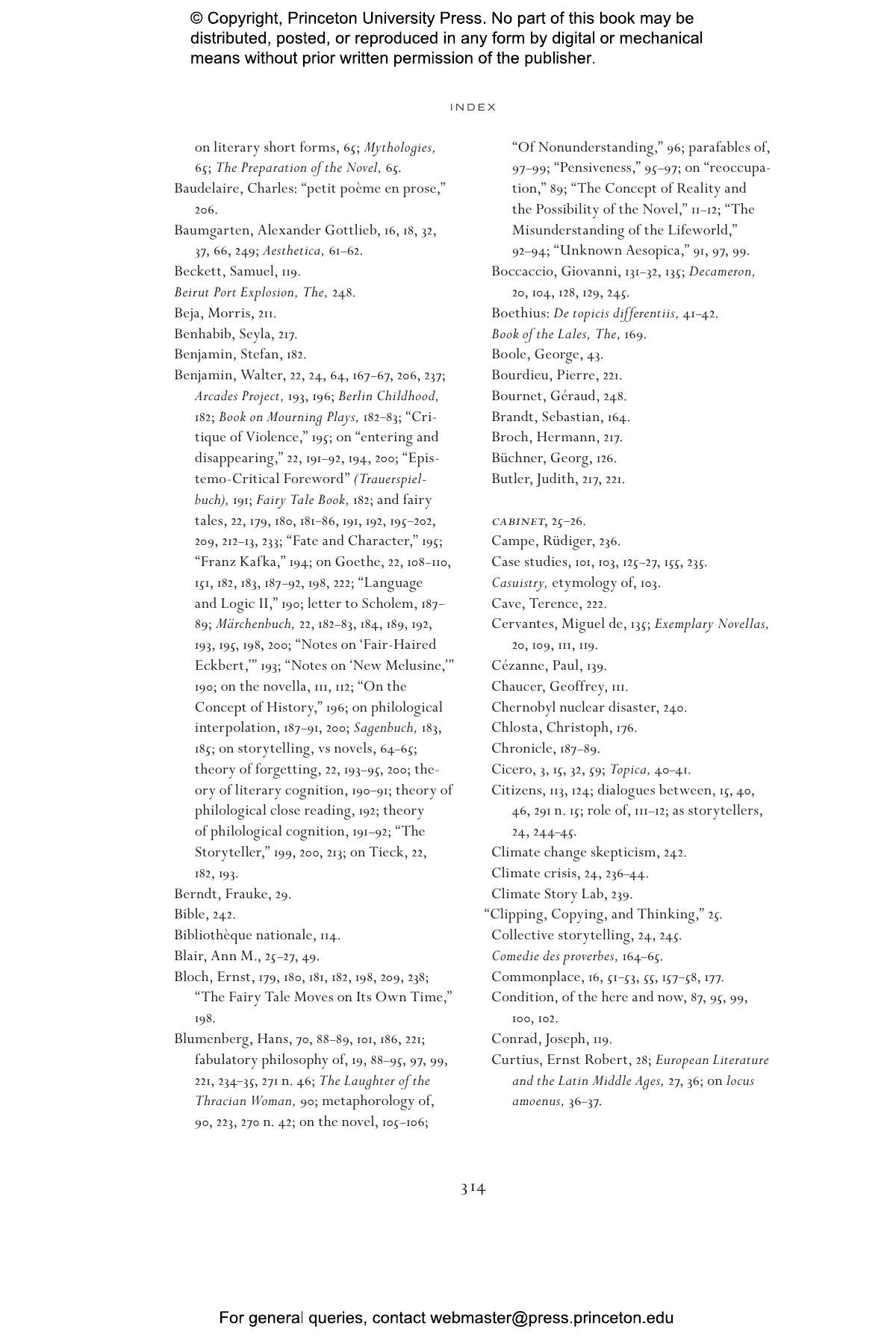 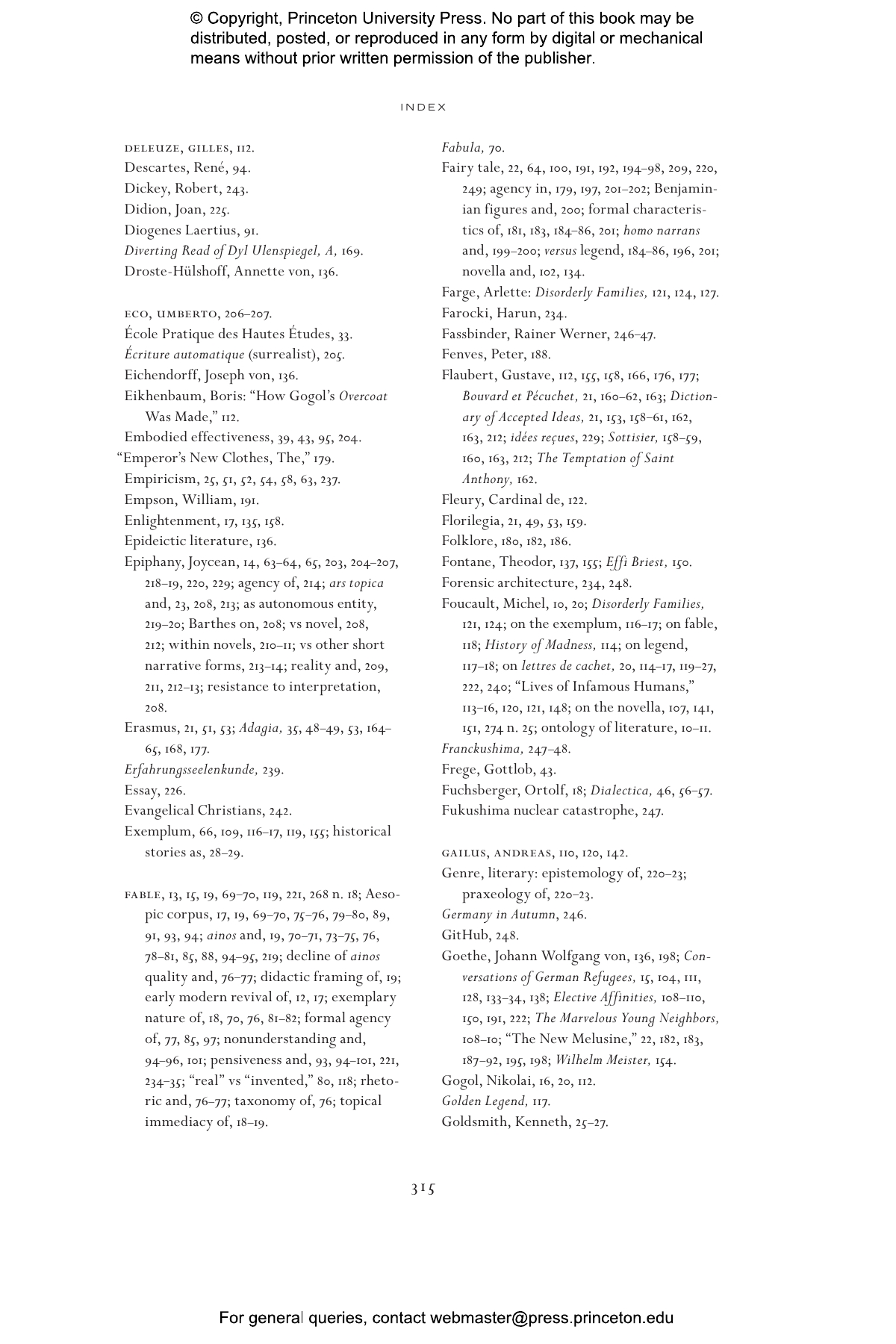 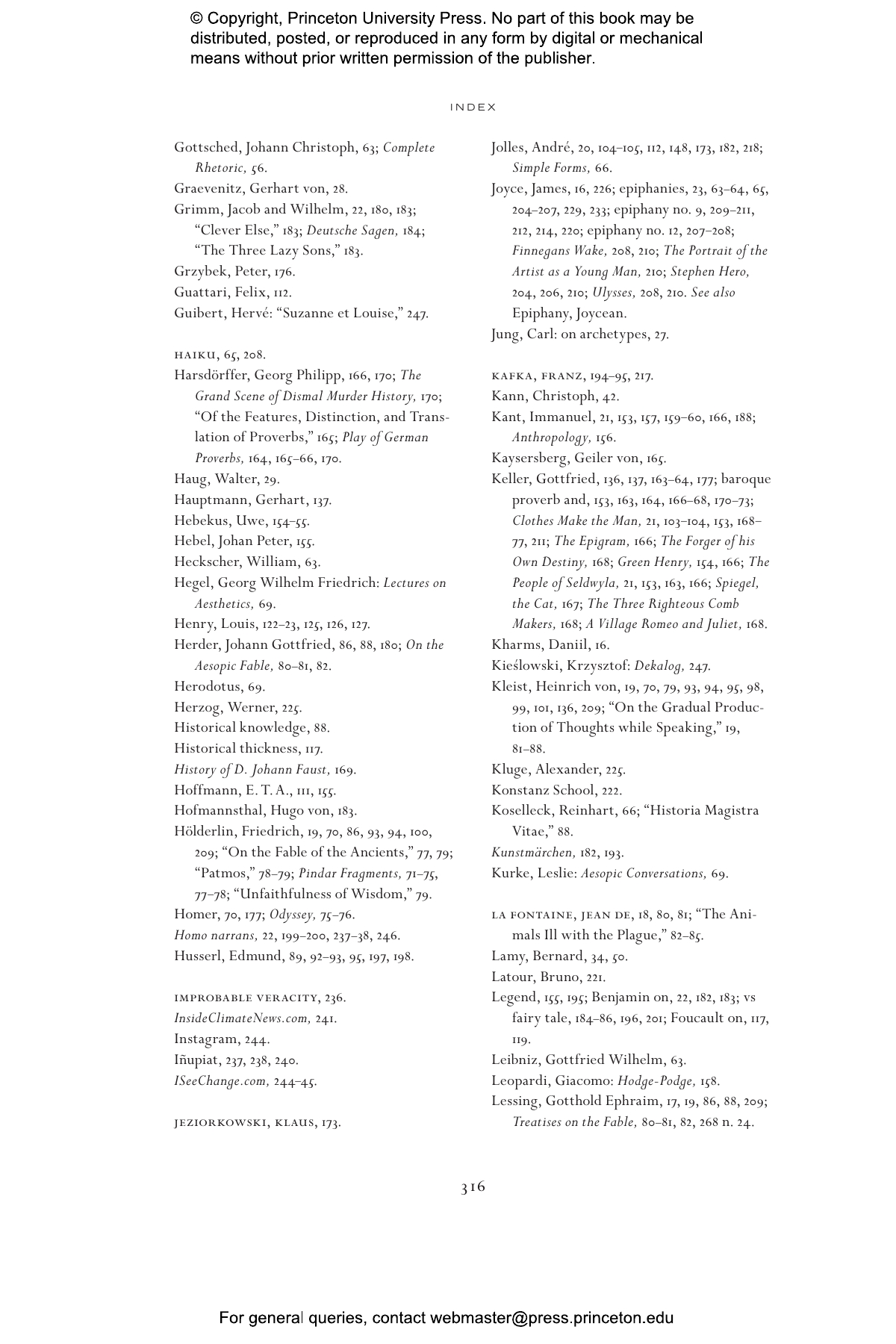 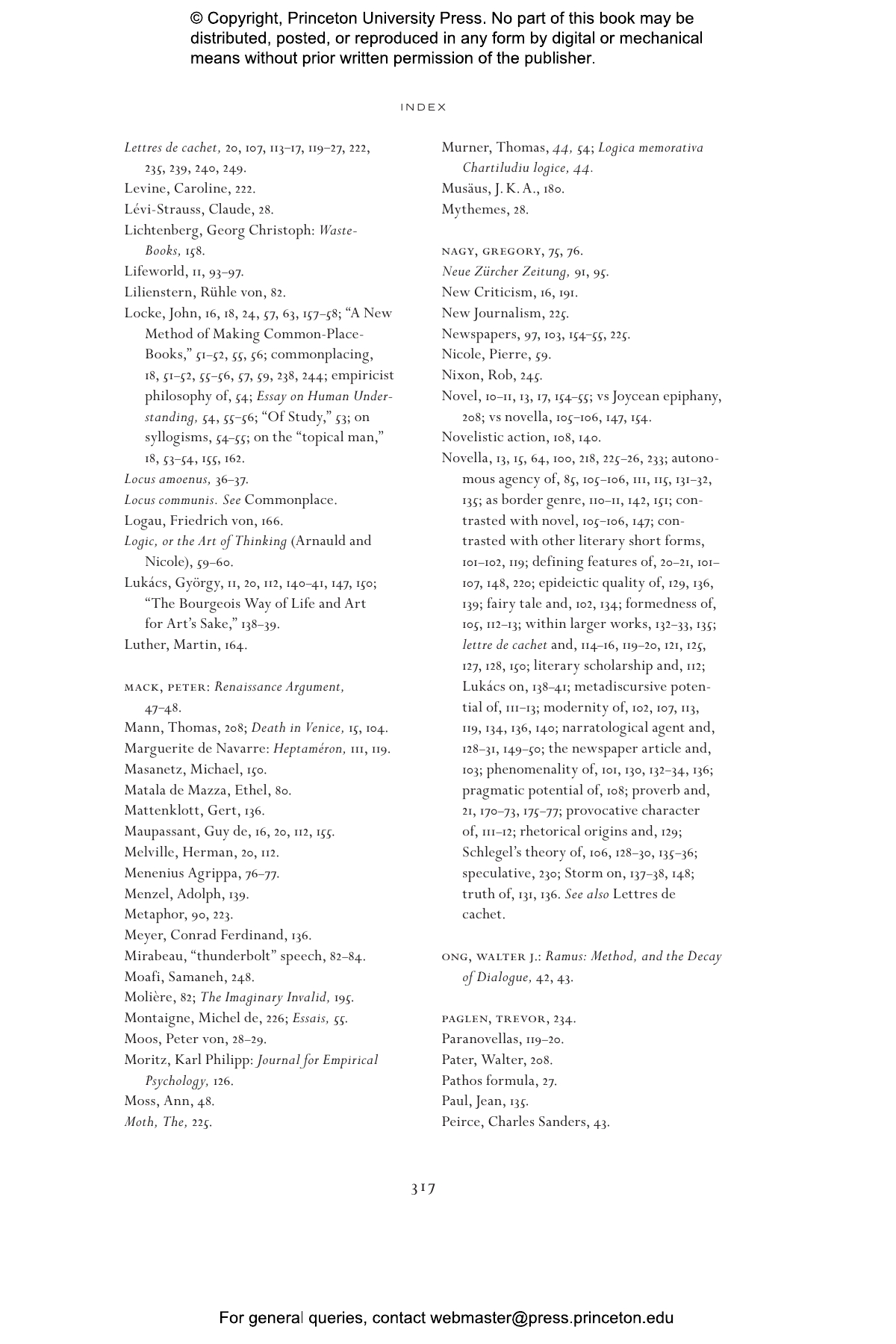 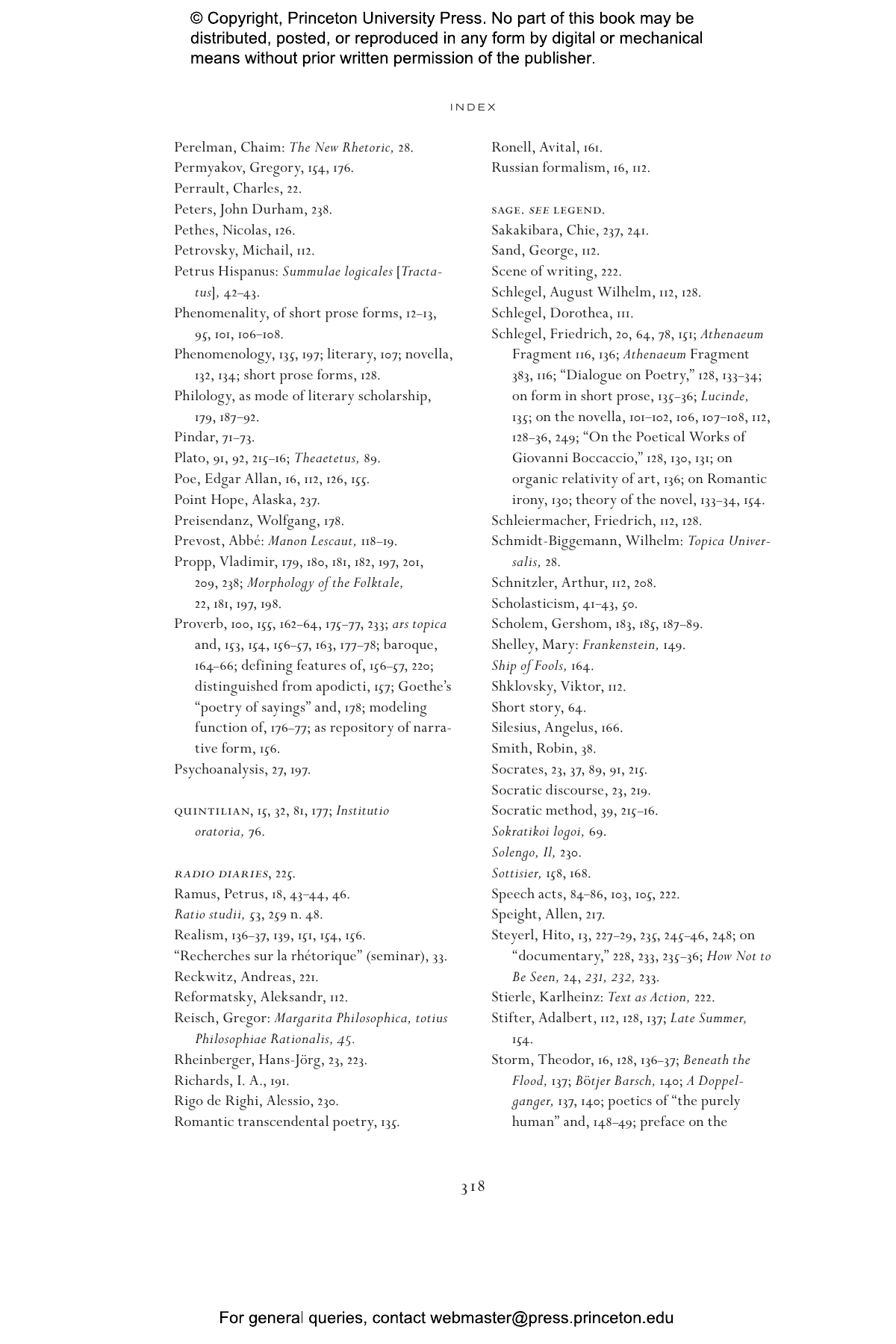 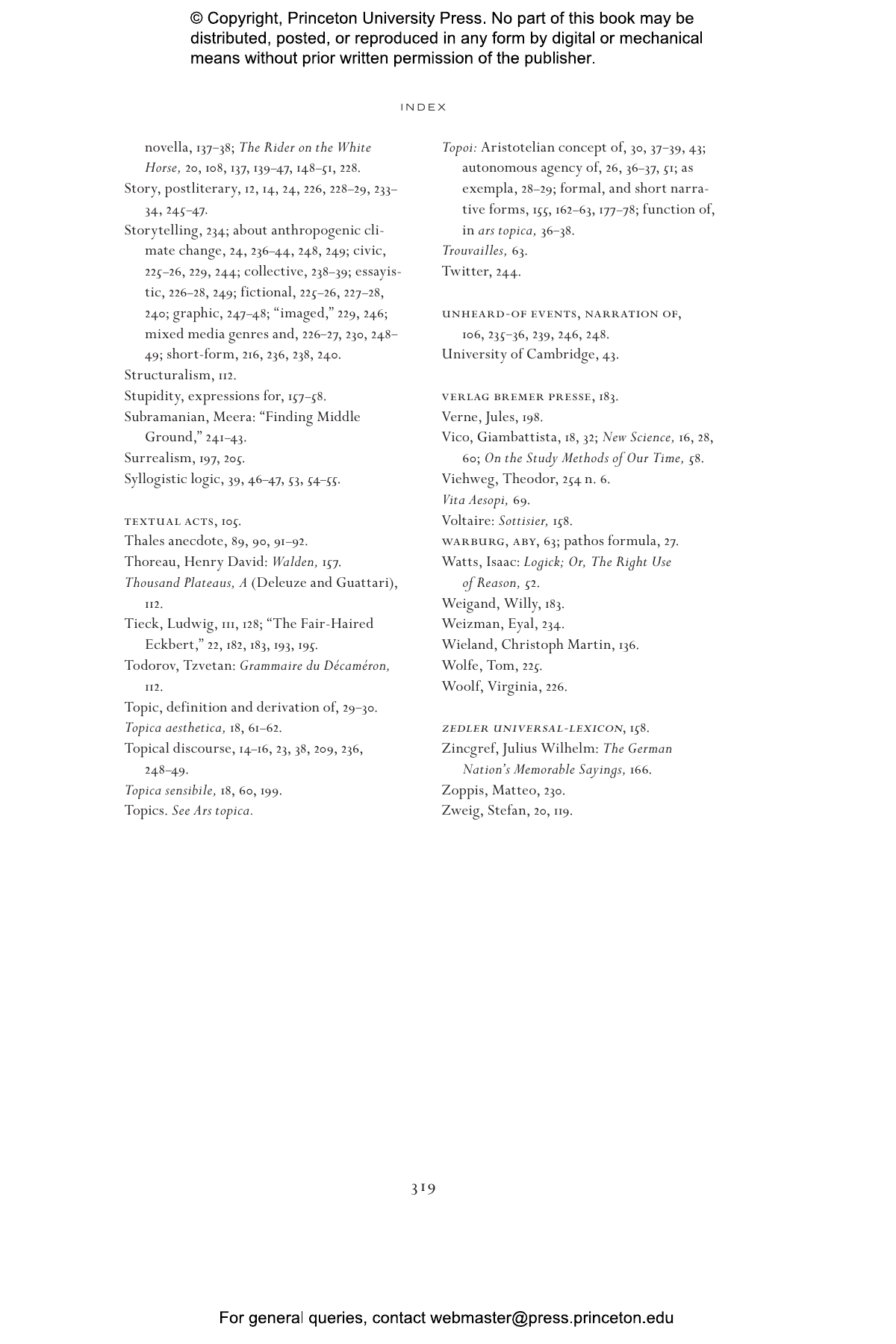 A deep history of storytelling as a civic agency, recalibrating literature’s political role for the twenty-first century 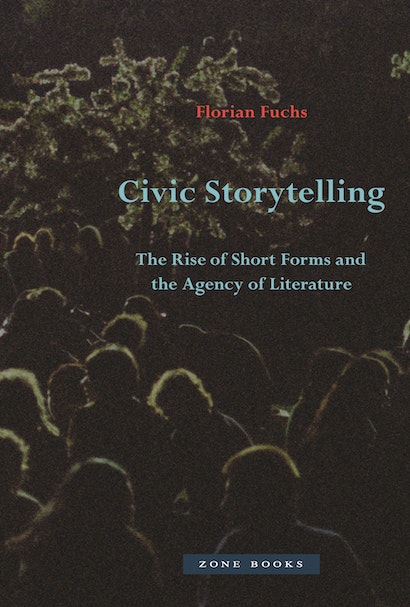 Why did short narrative forms like the novella, fable, and fairy tale suddenly emerge around 1800 as genres symptomatic of literature’s role in life and society? In order to explain their rapid ascent to such importance, Florian Fuchs identifies an essential role of literature, a role traditionally performed within classical civic discourse of storytelling, by looking at new or updated forms of this civic practice in modernity. Fuchs’s focus in this groundbreaking book is on the fate of topical speech, on what is exchanged between participants in argument or conversation as opposed to rhetorical speech, which emanates from and ensures political authority. He shows how after the decline of the Ars topica in the eighteenth century, various forms of literary speech took up the role of topical speech that Aristotle had originally identified. Thus, his book outlines a genealogy of various literary short forms—from fable, fairy tale, and novella to twenty-first century video storytelling—that attempted on both “high” and “low” levels of culture to exercise again the social function of topical speech. Some of the specific texts analyzed include the novellas of Theodor Storm and the novella-like lettre de cachet, proverbial fictions of Gustave Flaubert and Gottfried Keller, the fairy tale as rediscovered by Vladimir Propp and Walter Benjamin, the epiphanies of James Joyce, and the video narratives of Hito Steyerl.

Florian Fuchs is a scholar of literary epistemology and media studies. He is a postdoctoral researcher at Freie Universität Berlin. He is the coeditor of History, Metaphors, Fables: A Hans Blumenberg Reader.

“Why has the novel stolen so much attention from the equally robust lineage of short forms? In his erudite and wide-ranging alternate literary history, Florian Fuchs rebalances accounts, revealing a long backdrop to our data floods and snippet reading. Short forms do not lead us out of the world, but into full engagement with it; they are the democratic media of the commons.”—John Durham Peters, Maria Rosa Menocal Professor of English and of Film and Media Studies, Yale University

“Civic Storytelling is a timely intervention in our age of debates about fact and fiction. Drawing on Hannah Arendt’s idea of enacted stories, Florian Fuchs makes a convincing case for the particular cognitive productivity of short narratives. Whereas novels disengage their readers from the world they live in, proverbs, fables, fairy tales, and novellas are occurrences in their present living moment. Elegantly interweaving theoretical and historical reflections with close readings of a wide array of texts from the seventeenth century to the present, Fuchs offers fresh insights on small forms.”—Eva Geulen, director of the Leibniz-Centre for Literary and Cultural Research in Berlin and Professor of Cultural Studies at the Humboldt University in Berlin

“Civic Storytelling lays bare the complex legacies and persistent powers of short narrative forms. From modern attempts to refashion the fable to modernist studies of fairy tales, from Walter Benjamin’s doctrine of the novella to contemporary practices of telling stories ‘stranger than fiction,’ Florian Fuchs draws the elements of a new theory of the ‘topical function of speech.’ He guides the reader with assurance and learning through fascinating moments in the history and theory of literature.”—Daniel Heller-Roazen, Arthur W. Marks ’19 Professor of Comparative Literature and the Council of the Humanities, Princeton University