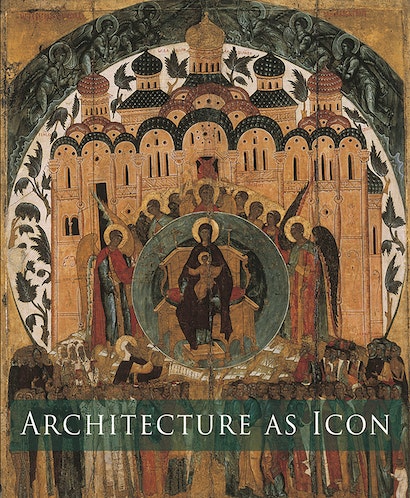 Presenting the first formulation of the central subject, this volume challenges major assumptions long held by Western art historians and provides new ways of thinking about, looking at, and understanding Byzantine art in its broadest geographic and chronological framework, from A.D. 300 to the early nineteenth century.

Byzantine art abandoned classical ideals in favor of formulas that conveyed spiritual concepts through stylized physical forms. Scholarship dealing with Byzantine icons has previously been largely focused on depictions of holy figures, dismissing representations of architecture as irrelevant space-filling background. Architecture as Icon demonstrates that background representations of architecture are meaningful, active components of compositions, often as significant as the human figures. The book provides a critical view for understanding the Byzantine conception of architectural forms and space and the corresponding intellectual underpinnings of their representation.

Introduced by four thought-provoking essays, the catalogue divides the material as included in the exhibition into four categories identified as: generic, specific, and symbolic representations, and a final grouping entitled “From Earthly to Heavenly Jerusalem.” This handsomely illustrated volume addresses various approaches to depicting architecture in Byzantine art that contrast sharply with those of the Renaissance and subsequent Western artistic tradition.

Slobodan Curcic is professor of Early Christian Byzantine Architecture and Monumental Decoration in the Department of Art and Archaeology at Princeton University. Evangelina Hadjitryphonos is Honorary Head of Department, Hellenic Ministry of Culture.

"Beautifully produced, this book will be valuable to scholars and advanced students but with the caution that, as Curcic surely knows, there is more to building than theology."—A. Cutler, Choice