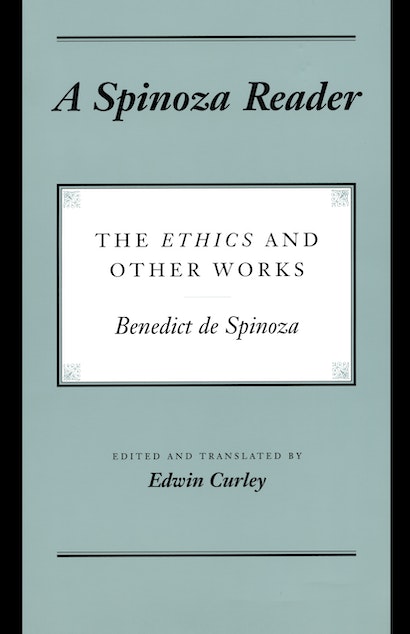 This anthology of the work of Baruch de Spinoza (1632-1677) presents the text of Spinoza’s masterwork, the Ethics, in what is now the standard translation by Edwin Curley. Also included are selections from other works by Spinoza, chosen by Curley to make the Ethics easier to understand, and a substantial introduction that gives an overview of Spinoza’s life and the main themes of his philosophy. Perfect for course use, the Spinoza Reader is a practical tool with which to approach one of the world’s greatest but most difficult thinkers, a passionate seeker of the truth who has been viewed by some as an atheist and by others as a religious mystic.


The anthology begins with the opening section of the Treatise on the Emendation of the Intellect, which has always moved readers by its description of the young Spinoza’s spiritual quest, his dissatisfaction with the things people ordinarily strive for — wealth, honor, and sensual pleasure — and his hope that the pursuit of knowledge would lead him to discover the true good. The emphasis throughout these selections is on metaphysical, epistemological, and religious issues: the existence and nature of God, his relation to the world, the nature of the human mind and its relation to the body, and the theory of demonstration, axioms, and definitions. For each of these topics, the editor supplements the rigorous discussions in the Ethics with informal treatments from Spinoza’s other works.

Edwin Curley, Professor of Philosophy at the University of Illinois at Chicago, is the author of Behind the Geometrical Method: A Reading of Spinoza's "Ethics" (Princeton) and editor and translator of Princeton's edition of the works of Spinoza.