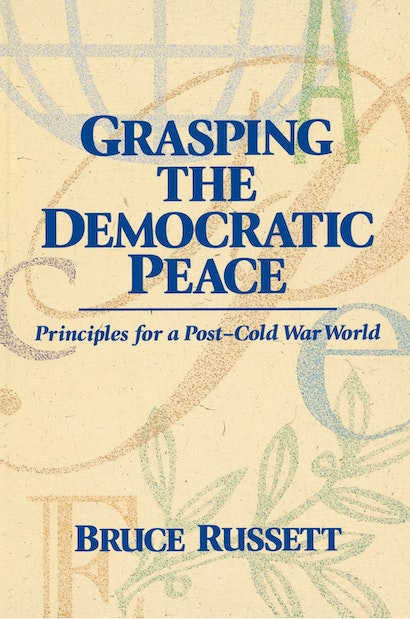 By illuminating the conflict-resolving mechanisms inherent in the relationships between democracies, Bruce Russett explains one of the most promising developments of the modern international system: the striking fact that the democracies that it comprises have almost never fought each other.

Bruce Russett is Dean Acheson Professor of International Relations and Political Science at Yale University and editor of the Journal of Conflict Resolution. His many works include Controlling the Sword: The Democratic Governance of National Security and The Prisoners of Insecurity: Nuclear Deterrence, the Arms Race, and Arms Control. In writing Grasping the Democratic Peace, he was accompanied by anthropologists Carol R. Ember and Melvin Ember and political scientists William Antholis and Zeev Maoz.

"Russett finds this [the proposition that democracies do not fight each other] to be an extraordinarily robust conclusion.... [The book] presents a challenge to realists while providing a rigorous undergirding to what has become a widespread view."—Francis Fukuyama, Foreign Affairs

"The ambition and scope of the study provides the illuminating and unexpected insights into the relationships between war and democracy."—Roland Dannreuther, Survival

"The descriptive phase of scholarly research on the absence of war between democratic dyads has been largely completed, and attention is now shifting to alternative explanations for this well-confirmed empirical generalization. The best place to begin, both for a summary of the descriptive evidence and for an attempt to explain it, is Bruce Russett's Grasping the Democratic Peace."—Jack S. Levy, International Studies Review

"In Grasping the Democratic Peace, Bruce Russett has published a powerful book clarifying the theoretical debate and producing additional support for the relative pacifism of democracies from previously untapped sources. The book will quickly claim a secure place in the literature for its insight and empirical originality. No student of international relations can fail to profit from a close read."—-David A. Lake, The Journal of Politics

"Bruce Russett's laudable book summarizes, dissects, and expands our understanding of the disinclination shown by democracies to fight each other, a finding that has spawned a minor cottage industry of analytic studies. . . . the book combines rigor and relevance, maturity and originality."—American Political Science Review

"A very important book on a timely subject by a well-known and rigorous scholar. The book addresses a subject that has been of great interest recently both to academics and in policy circles: whether democracies ever fight wars with each other; and if not, why not."—Jack L. Snyder, Columbia University

"The best book yet written on the important question of why democracies appear not to fight wars with each other even though they do fight with non-democratic states. . . . This is a highly original and provocative work that is bound to stimulate much discussion and debate."—Bruce Bueno de Mesquita, Hoover Insitution and University of Rochester

"This is a sophisticated and interesting book on what is undoubtedly the hot topic among students of international relations. Given the book's subject and its high quality, Grasping the Democratic Peace will be essential reading."—Aaron Friedberg, Princeton University