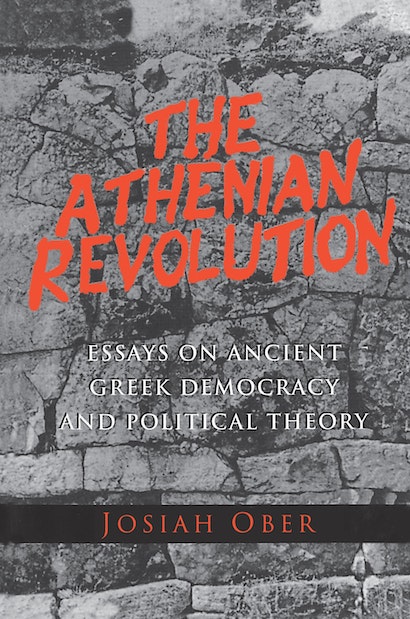 Where did “democracy” come from, and what was its original form and meaning? Here Josiah Ober shows that this “power of the people” crystallized in a revolutionary uprising by the ordinary citizens of Athens in 508-507 B.C. He then examines the consequences of the development of direct democracy for upper-and lower-class citizens, for dissident Athenian intellectuals, and for those who were denied citizenship under the new regime (women, slaves, resident foreigners), as well as for the general development of Greek history.


When the citizens suddenly took power into their own hands, they changed the cultural and social landscape of Greece, thereby helping to inaugurate the Classical Era. Democracy led to fundamental adjustments in the basic structures of Athenian society, altered the forms and direction of political thinking, and sparked a series of dramatic reorientations in international relations. It quickly made Athens into the most powerful Greek city-state, but it also fatally undermined the traditional Greek rules of warfare. It stimulated the development of the Western tradition of political theorizing and encouraged a new conception of justice that has striking parallels to contemporary theories of rights. But Athenians never embraced the notions of inherency and inalienability that have placed the concept of rights at the center of modern political thought. Thus the play of power that constituted life in democratic Athens is revealed as at once strangely familiar and desperately foreign, and the values sustaining the Athenian political community as simultaneously admirable and terrifying.

Josiah Ober is the David Magie Professor of Ancient History in the Classics Department of Princeton University. He is the author of Political Dissent in Democratic Athens: Intellectual Critics of Popular Rule, Mass and Elite in Democratic Athens: Rhetoric, Ideology, and the Power of the People and Demokratia: A Conversation on Democracies, Ancient and Modern (all from Princeton).

"The Athenian Revolution is a welcome collection.... Interesting and witty introductions place the articles in personal and scholarly context."—Peter Krentz, Religious Studies Review

"[Ober] has succeeded in writing a book that both political theorists and ancient historians will find always provocative and often persuasive. Highly recommended."—Choice

"By confronting critically an alien way of thinking and doing and speaking about politics that is nevertheless also the fountainhead of our own Western political tradition, Ober provides a wide range of readers with a truly unsettling and therefore properly educational experience."—Paul Cartledge, New England Classical Journal

"This book brings together some of Ober's most important essays of the last decade. . . . Anyone who cares about democracy, ancient or modern, should read this book."—Ian Morris, Stanford University

"By confronting critically an alien way of thinking, doing, and speaking politics that is nevertheless also the fountainhead of our own Western political tradition, Ober provides a wide range of readers with a truly unsettling and therefore properly educational experience."—P. A. Cartledge, University of Cambridge