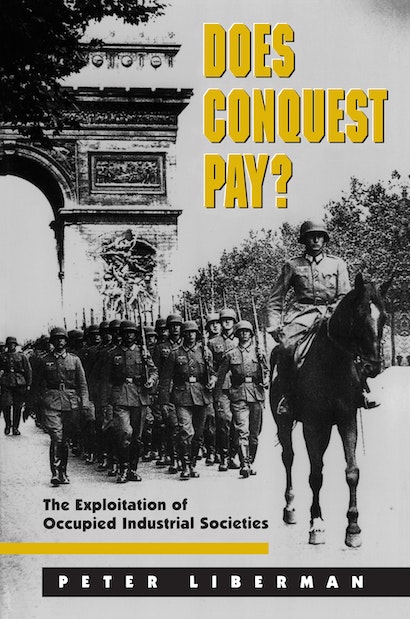 Can foreign invaders successfully exploit industrial economies? Since control over economic resources is a key source of power, the answer affects the likelihood of aggression and how strenuously states should counter it. The resurgence of nationalism has led many policymakers and scholars to doubt that conquest still pays. But, until now, the “cumulativity” of industrial resources has never been subjected to systematic analysis.

Does Conquest Pay? demonstrates that expansion can, in fact, provide rewards to aggressor nations. Peter Liberman argues that invaders can exploit industrial societies for short periods of time and can maintain control and economic performance over the long term. This is because modern societies are uniquely vulnerable to coercion and repression. Hence, by wielding a gun in one hand and offering food with the other, determined conquerors can compel collaboration and suppress resistance. Liberman’s argument is supported by several historical case studies: Germany’s capture of Belgium and Luxembourg during World War I and of nearly all of Europe during World War II; France’s seizure of the Ruhr in 1923-24; the Japanese Empire during 1910-45; and Soviet hegemony over Eastern Europe in 1945-89.

Does Conquest Pay? suggests that the international system is more war-prone than many optimists claim. Liberman’s findings also contribute to debates about the stability of empires and other authoritarian regimes, the effectiveness of national resistance strategies, and the sources of rebellious collective action.

"An outstanding piece of multilingual historical and economic research in the service of social science."—Foreign Affairs

"This close study of five major occupations (including the Nazi, Japanese, and Soviet empires) concludes that conquest pays handsomely. The costs are low; the benefits potentially large. This is a valuable analysis, of significance for strategic study of the 20th century, and of disturbing implications for architects of the current international system."—The Virginia Quarterly Review of History