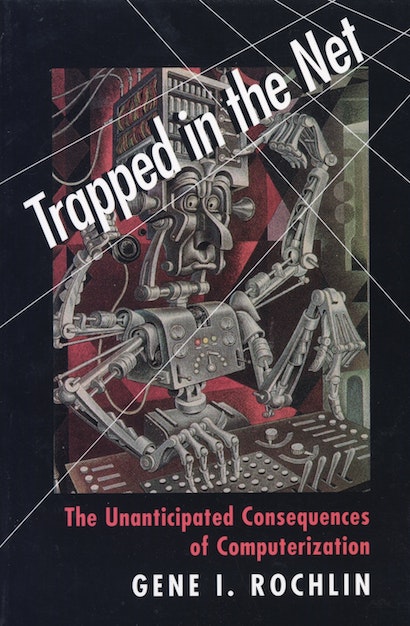 Voice mail. E-mail. Bar codes. Desktops. Laptops. Networks. The Web. In this exciting book, Gene Rochlin takes a closer look at how these familiar and pervasive productions of computerization have become embedded in all our lives, forcing us to narrow the scope of our choices, our modes of control, and our experiences with the real world. Drawing on fascinating narratives from fields that range from military command, air traffic control, and international fund transfers to library cataloging and supermarket checkouts, Rochlin shows that we are rapidly making irreversible and at times harmful changes in our business, social, and personal lives to comply with the formalities and restrictions of information systems.


The threat is not the direct one once framed by the idea of insane robots or runaway mainframes usurping human functions for their own purposes, but the gradual loss of control over hardware, software, and function through networks of interconnection and dependence. What Rochlin calls the computer trap has four parts: the lure, the snare, the costs, and the long-term consequences. The lure is obvious: the promise of ever more powerful and adaptable tools with simpler and more human-centered interfaces. The snare is what usually ensues. Once heavily invested in the use of computers to perform central tasks, organizations and individuals alike are committed to new capacities and potentials, whether they eventually find them rewarding or not. The varied costs include a dependency on the manufacturers of hardware and software — and a seemingly pathological scramble to keep up with an incredible rate of sometimes unnecessary technological change. Finally, a lack of redundancy and an incredible speed of response make human intervention or control difficult at best when (and not if) something goes wrong. As Rochlin points out, this is particularly true for those systems whose interconnections and mechanisms are so deeply concealed in the computers that no human being fully understands them.

Gene I. Rochlin is Professor of Energy and Resources at the University of California, Berkeley. He has been the recipient of a John D. and Catherine T. MacArthur Foundation Individual Fellowship for Research and Writing in International Security and of a John Simon Guggenheim Memorial Fellowship.

"In Trapped in the Net, an insightful and painstakingly documented book, [Rochlin] explores the changes already wrought by computers and networking in areas as diverse as financial markets, air travel, nuclear power plants, corporate management and the military."—Lawrence Hunter, The New York Times Book Review

"Trapped in the Net covers not only the military, but also financial markets, aviation and business. In all cases, humans working inside organizations become helpless just when the systems they use encounter the unexpected and start behaving idiotically. This is a fascinating and well-argued book. . . . The references are good, and certainly prove that Rochlin is not a lone voice with a cynical message."—Harold Thimbleby, New Scientist

"[Rochlin's] straightforward argument should be apparent to those managing and promoting increasing computerization: that greater dependence on computers implies greater disaster when they fail. . . . Rochlin ends with an exploration of the new cyberized military and continues to pinpoint the unintended consequences that computer enthusiasts rarely think about, but should."—Booklist

".[C]omputerization is leading us into pretty dire straits. In financial markets, warp-speed automated trading creates opportunities for fraud and moves us further away from a stable investment climate. In the office, computers promise efficiency, but bring fragmented knowledge and reduced autonomy to workers. There's worse news. Pilots in the 'glass cockpits' of modern airplanes have too much data to interpret, and nuclear power plant operators are less likely to have an intuitive feel for things going wrong 'on the floor'. Most sobering of all is the discussion of automation and the military."—Publishers Weekly