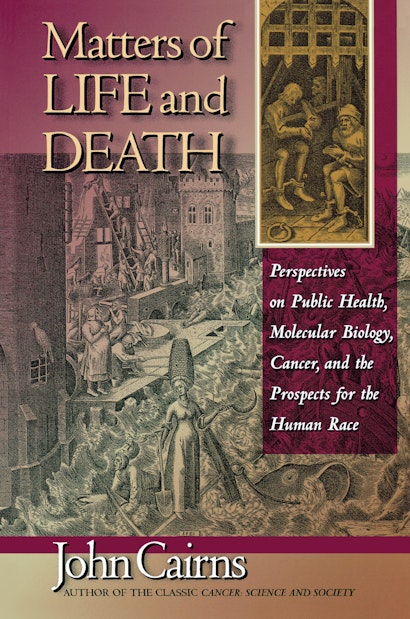 Cancer has become the scourge of the twentieth century. It was always part of the human condition, but until recently it was not a common cause of death because most people died from the infectious diseases. Now that so many of us will live long enough to develop cancer, we need to learn as much about it as we can. This requires some understanding of molecular biology. John Cairns has made significant contributions to cancer research, molecular biology, and virology. He believes that it is possible to explain what is known about cancer and about molecular biology in terms that are easily understood by people with little or no scientific training. In this fascinating book, he explores the revolution in public health, the origins and principles of molecular biology, and our emerging understanding of the causes of cancer. Finally, he discusses how these developments are likely to affect future generations.


As Cairns points out, the last two hundred years have altered our life expectations beyond all recognition. Even in the less developed nations of the world, people are starting to believe that everyone ought to be able to live into old age and be protected from the major causes of premature death. This change in our expectations is one of the major benefits of technology and the biological sciences. But the resulting explosion in the human population ultimately threatens everything we have gained by scientific progress.

John Cairns, M.D., is recently retired from the Harvard School of Public Health. Before that appointment, he held posts as Director of Cold Spring Harbor Laboratory and then as Director of one of the laboratories run by the Imperial Cancer Research Fund in London. He is the author of Cancer: Science and Society.

"A collection of beautifully written, reflective essays. . . . Cairns's writing is a fine example of how science can be presented to the general reader in an extremely scholarly way, and why writing of this kind can be of equal interest to fellow scientists, reflecting as it does a remarkable imagination and intellect. . . . [A] reflective and thoughtful account. . . ."—Sir David Weatherall, The Times Higher Education Supplement

"A brilliant and impressive analysis. . . [t]his book should be in everyone's personal library for many reasons; first, because Cairns is a lyrical writer and, second, he writes about science and molecular biology based on vast scientific knowledge, stressing the importance of history and of appreciating ultimate causes for all aspects of our lives and all that affects us. Interwoven are his perceptions of the beautiful and gracious things in life-art, music, literature-all with exquisite clarity. Matters is a joy to read."—Choice

"Although this is a set of essays rather than an autobiography. . . several incidents of the distinguished physician-researcher's life surface amusingly. . . . Well documented, the entire book has much to offer for serious general readers. . . ."—Booklist

"During his long scientific career, John Cairns has worked at the highest levels in molecular genetics, cancer research, and public health. He uses this rich experience to bring us a series of historical essays on life that display unusual vision and clarity of thought."—Karl Drlica, The Public Health Research Institute/New York University, and author of The Double-Edged Sword: The Promises and Risks of the Genetic Revolution

"Graceful essays from the pen of a keen observer who is blessed with a wide-ranging intellect and a familiarity with molecular biology, human origins, epidemiology, and the origins of human cancer."—Robert A. Weinberg, author of Racing to the Beginning of the Road