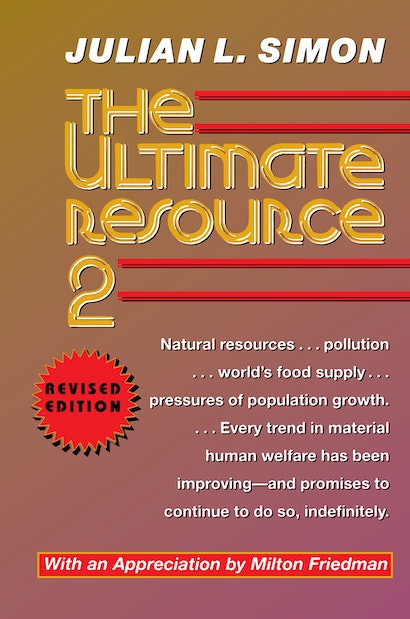 Arguing that the ultimate resource is the human imagination coupled to the human spirit, Julian Simon led a vigorous challenge to conventional beliefs about scarcity of energy and natural resources, pollution of the environment, the effects of immigration, and the “perils of overpopulation.” The comprehensive data, careful quantitative research, and economic logic contained in the first edition of The Ultimate Resource questioned widely held professional judgments about the threat of overpopulation, and Simon’s celebrated bet with Paul Ehrlich about resource prices in the 1980s enhanced the public attention — both pro and con — that greeted this controversial book.


Now Princeton University Press presents a revised and expanded edition of The Ultimate Resource. The new volume is thoroughly updated and provides a concise theory for the observed trends: Population growth and increased income put pressure on supplies of resources. This increases prices, which provides opportunity and incentive for innovation. Eventually the innovative responses are so successful that prices end up below what they were before the shortages occurred. The book also tackles timely issues such as the supposed rate of species extinction, the “vanishing farmland crisis,” and the wastefulness of coercive recycling.


In Simon’s view, the key factor in natural and world economic growth is our capacity for the creation of new ideas and contributions to knowledge. The more people alive who can be trained to help solve the problems that confront us, the faster we can remove obstacles, and the greater the economic inheritance we shall bequeath to our descendants. In conjunction with the size of the educated population, the key constraint on human progress is the nature of the economic-political system: talented people need economic freedom and security to bring their talents to fruition.

Julian L. Simon, until his death in 1998, was Professor of Business Administration at the University of Maryland and a Senior Fellow at the Cato Institute. Among his books are Population and Development in Poor Countries: Selected Essays (Princeton), The Economic Consequences of Immigration to the United States, Population Matters: People, Resources, Environment, and Immigration, and The State of Humanity.

"Julian Simon's 1981 book The Ultimate Resource excoriated prominent environmentalists for resorting to scare tactics and data-bending.... As Simon notes, the past sixteen years have been kind to many of his ideas.... Much as Simon had predicted, global per capita food production edged upward steadily while population rose and air quality improved in many places and ways."—Kathleen Courrier, The Washington Post

"With a full understanding of the opposition and smears he would encounter, Simon nevertheless wrote The Economics of Population Growth, Population Matters, and his best-known book, The Ultimate Resource. To him, the ultimate resource was human intelligence. We should also add, in honor of Simon, the courage to use that intelligence."—Thomas Sowell, Chicago Sun-Times

"The most powerful challenge to be mounted against the principles of popular environmentalism in the last fifteen years."—The Washington Post Book World

"Compelling and often brilliantly original. . . . [Simon's] economic analysis will leave a lot of readers heavily revising their thinking about the world around them."—Fortune

"The Ultimate Resource is the most powerful challenge to be mounted against the principles of popular environmentalism in the last 15 years. . . . What is most startling is its deep-rooted optimism about the human condition. . . . [A] landmark book."—Washington Post Book World

"The truly delightful aspect of the book is its persistent iconoclasm. Page after page, Simon punctures myths of scarcity and offers instead the counsels of optimism."—The American Spectator

"Julian Simon, an economics professor, systematically, shockingly, irresponsibly explodes each and every foundation of the whole environmental movement. And he does so with so many facts, graphs and examples that it would be a strange person who could walk away from reading this book without his or her faith in the assumptions of the environmental movement being just a little bit shaken up. . . . This is a magnificent book with the power to change minds."—Matt Ridley, The Sunday Telegraph