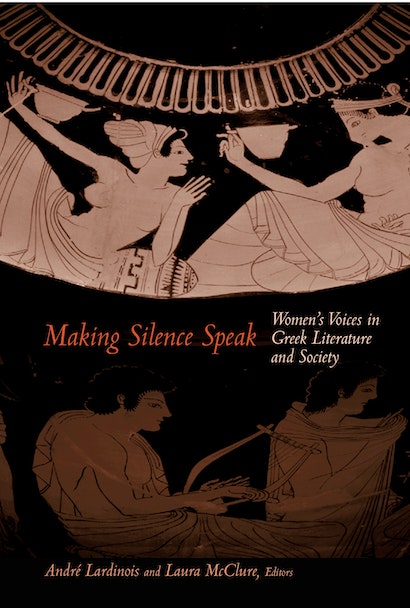 This collection attempts to recover the voices of women in antiquity from a variety of perspectives: how they spoke, where they could be heard, and how their speech was adopted in literature and public discourse. Rather than confirming the old model of binary oppositions in which women’s speech was viewed as insignificant and subordinate to male discourse, these essays reveal a dynamic and potentially explosive interrelation between women’s speech and the realm of literary production, religion, and oratory. The contributors use a variety of methodologies to mine a diverse array of sources, from Homeric epic to fictional letters of the second sophistic period and from actual letters written by women in Hellenistic Egypt to the poetry of Sappho.

André Lardinois is Professor of Greek Literature at the University of Nijmegen and the coauthor, with T. C. Oudemans, of Tragic Ambiguity: Anthropology, Philosophy, and Sophocles' Antigone (Leiden). Laura McClure is Associate Professor of Classics at the University of Wisconsin at Madison and the author of Spoken Like a Woman: Speech and Gender in Athenian Drama (Princeton).

"[A] brilliant and comprehensive collection of essays . . . one which will be of great interest to classicists and non-specialists alike."—Monica S. Cyrino, Religious Studies Quarterly

"There is no other collection that approaches the issue of women's voices in antiquity from such a broad perspective. Making Silence Speak will interest classicists and nonspecialists alike."—Froma I. Zeitlin, Princeton University

"An important and interesting collection that supports its claim that women's speech is not 'separate from and subordinate to male discourse,' but rather interrelated with it. This volume contains something of value for practically every Hellenist, and the individual pieces complement one another in a variety of suggestive ways."—Sarah T. Mace, Union College