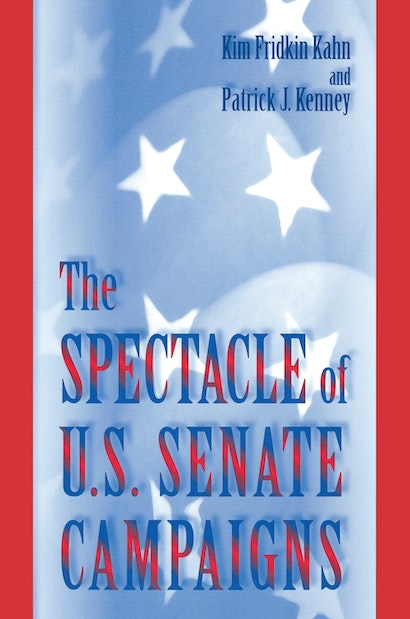 This book offers a bold, comprehensive look at how campaigns actually work, from the framing of issues to media coverage to voters’ decisions. In so doing, it challenges the common wisdom that campaigns are a noisy, symbolic aspect of electoral politics, in which the outcomes are determined mainly by economic variables or presidential popularity. Campaigns, the authors argue, do matter in the political process. Examining contested U.S. Senate races between 1988 and 1992, Kim Kahn and Patrick Kenney explore the details of the candidates’ strategies and messages, the content, tone, and bias of the media coverage, and the attitudes and behaviors of potential voters. Kahn and Kenney discover that when the competition between candidates is strong, political issues become clearly defined, and the voting population responds.


Through a mix of survey data, content analysis, and interviews, the authors demonstrate how competition influences serious political debates in elections. Candidates take stands and compare themselves to their opponents. The news media offer more coverage of the races, presenting evaluations of the candidates’ positions, critiques of their political careers, and analyses of their campaign ads. In response, the voters pay closer attention to the rhetoric of the candidates as they learn more about central campaign themes, often adjusting their own voting criteria. The book concentrates on Senate races because of the variance in campaign strategy and spending, media coverage, and voter reactions, but many of the findings apply to elections at all levels.

Kim Fridkin Kahn, author of The Political Consequences of Being a Woman, and Patrick J. Kenney are both Associate Professors in the Department of Political Science at Arizona State University. They have both published widely on the topic of campaigns in various journals.

"A welcome addition to a short list of books probing the dynamics of congressional elections."—Choice

"The richness of the study's findings combined with its rigor of research design and analysis makes it of equal interest to students of voting behavior and elections and students of Congress. The book is clearly written and the results of statistical analysis are presented in an accessible fashion. It is a major contribution."—Barbara Sinclair, Political Science Quarterly

"Kahn and Kenney's book makes a substantial contribution to our understanding of both U.S. Senate elections and political campaigns. The authors have done a commendable job of assembling a vast array of data and make clear, convincing arguments. The book draws on sophisticated statistical techniques and yet could be used in upper-division undergraduate courses."—Alan I. Abramowitz, Emory University

"A nicely textured and thorough analysis, The Spectacle of U.S. Senate Campaigns develops arguments about campaigns that greatly enrich our knowledge of their dynamics. Although the book deals with Senate elections, it will be of genuine interest to scholars who study campaigns for other offices, as well as those who are interested in voting behavior. By framing each chapter with interesting case studies of specific elections, the authors have extended the book's audience beyond specialists."—Linda Fowler, Rockefeller Center for the Social Sciences, Dartmouth College