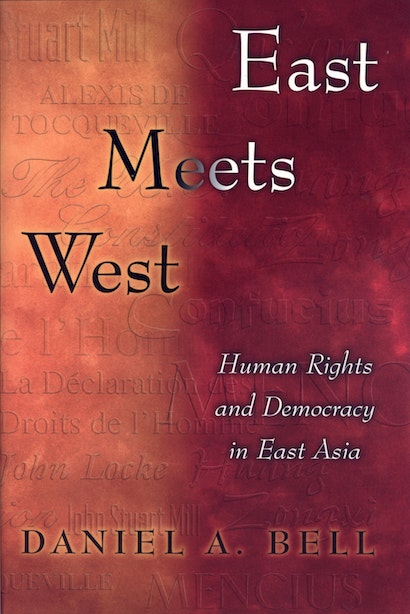 Is liberal democracy a universal ideal? Proponents of “Asian values” argue that it is a distinctive product of the Western experience and that Western powers shouldn’t try to push human rights and democracy onto Asian states. Liberal democrats in the West typically counter by questioning the motives of Asian critics, arguing that Asian leaders are merely trying to rationalize human-rights violations and authoritarian rule. In this book — written as a dialogue between an American democrat named Demo and three East Asian critics — Daniel A. Bell attempts to chart a middle ground between the extremes of the international debate on human rights and democracy.


Bell criticizes the use of “Asian values” to justify oppression, but also draws on East Asian cultural traditions and contributions by contemporary intellectuals in East Asia to identify some powerful challenges to Western-style liberal democracy. In the first part of the book, Bell makes use of colorful stories and examples to show that there is a need to take into account East Asian perspectives on human rights and democracy. The second part — a fictitious dialogue between Demo and Asian senior statesman Lee Kuan Yew — examines the pros and cons of implementing Western-style democracy in Singapore. The third part of the book is an argument for an as-yet-unrealized Confucian political institution that justifiably differs from Western-style liberal democracy.


This is a thought-provoking defense of distinctively East Asian challenges to Western-style liberal democracy that will stimulate interest and debate among students of political theory, Asian studies, and international human rights.

Daniel A. Bell is Senior Lecturer in the Department of Public and Social Administration at the City University of Hong Kong He has also taught at the National University of Singapore. He is the author of Communitarianism and Its Critics, the coauthor of Towards Illiberal Democracy in Pacific Asia, and coeditor of The East Asian Challenge for Human Rights.

"Daniel Bell has produced a book that is as creative and intriguing as it is scholarly and substantial. He has created three dramatic, engaging, philosophically penetrating dialogues illuminating the 'Asian Values' debate. . . . These dialogues are accessible and even entertaining, but they are also thoroughly researched and tightly argued."—Steven Wrage, Millenium

"Bell's East Asian interlocutors express some of the bewilderment felt by the recipients of America's moral advice, and the offer a robust critique. . . . American advocates of human rights tend to argue from principle: East Asians from how things currently are on the ground."—Alex de Waal, London Review of Books

"Bell criticizes 'West-centric perspectives,' which assume that every society aspires to the ideal of becoming a Western-style liberal democracy. [This is an] extremely rich new book."—Jerry Burke, Philosophy East & West

"Daniel Bell gets to the hard philosophical and empirical questions that hide behind the often corrupt political rhetoric about cultural difference and human rights. This fine book explores the major issues about the universality of human rights and democracy with great sensitivity, nuance, and rigor. It is full of new and interesting insights, ideas, and arguments."—Charles Taylor

"Daniel Bell is one of the few political theorists who is able to write dialogue, actually to conduct a philosophical conversation on the printed page. In this book, this difficult genre is used in an exemplary way to teach us about the political engagement of Western liberalism and 'Asian values'-and also about the possible meaning of human rights in a global setting."—Michael Walzer

"Unlike some Western critics who easily satisfy themselves by launching polemical criticisms of human rights violations and authoritarianism in Asia, Daniel Bell insists on giving a fair hearing to different political and philosophical voices from that region. The result of this is that he is able to develop powerful criticisms of Asian authoritarianism with careful philosophical and empirical support, and to construct alternative proposals of political institutions that may have appeal to people in the region."—Joseph Chan, University of Hong Kong