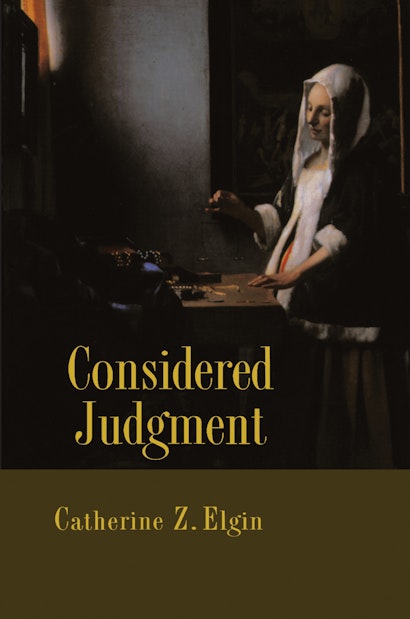 Philosophy long sought to set knowledge on a firm foundation, through derivation of indubitable truths by infallible rules. For want of such truths and rules, the enterprise foundered. Nevertheless, foundationalism’s heirs continue their forbears’ quest, seeking security against epistemic misfortune, while their detractors typically espouse unbridled coherentism or facile relativism. Maintaining that neither stance is tenable, Catherine Elgin devises a via media between the absolute and the arbitrary, reconceiving the nature, goals, and methods of epistemology. In Considered Judgment, she argues for a reconception that takes reflective equilibrium as the standard of rational acceptability. A system of thought is in reflective equilibrium when its components are reasonable in light of one another, and the account they comprise is reasonable in light of our antecedent convictions about the subject it concerns.


Many epistemologists now concede that certainty is a chimerical goal. But they continue to accept the traditional conception of epistemology’s problematic. Elgin suggests that in abandoning the quest for certainty we gain opportunities for a broader epistemological purview — one that comprehends the arts and does justice to the sciences. She contends that metaphor, fiction, emotion, and exemplification often advance understanding in science as well as in art. The range of epistemology is broader and more variegated than is usually recognized. Tenable systems of thought are neither absolute nor arbitrary. Although they afford no guarantees, they are good in the way of belief.

Catherine Z. Elgin is Professor of the Philosophy of Education at Harvard University. Her books include With Reference to Reference and Between the Absolute and the Arbitrary. She coauthored Reconceptions in Philosophy and Other Arts and Sciences with Nelson Goodman.

"Elgin has managed an eloquent argument for a contextual epistemology that is relative and relational without being relativistic.... This work is likely to be widely read and debated. Her philosophical voice is an example of well-reasoned and eloquent debate."—Word Trade

"Catherine Elgin writes clearly and engagingly. She is masterful in providing telling examples, pithy metaphors, and apt juxtapositions to make her points. I enjoyed and profited from reading Considered Judgment, and I think others both in and out of philosophy will too."—Robert Schwartz, University of Wisconsin-Milwaukee

"Considered Judgment contains a detailed defense of a sophisticated and novel view of basic epistemology as well as perceptive criticism of leading alternative views. Catherine Elgin's discussion of the epistemological significance of emotion, metaphor, and fiction will also interest many readers. The book contains a unique epistemological position that deserves serious consideration by specialists in the subject."—Bruce Aune, University of Massachusetts