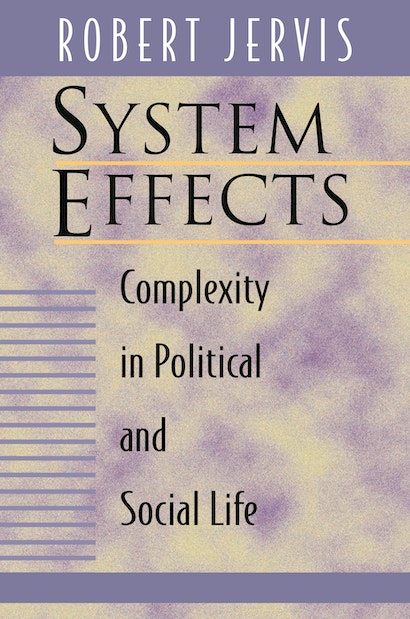 Based on more than three decades of observation, Robert Jervis concludes in this provocative book that the very foundations of many social science theories — especially those in political science — are faulty. Taking insights from complexity theory as his point of departure, the author observes that we live in a world where things are interconnected, where unintended consequences of our actions are unavoidable and unpredictable, and where the total effect of behavior is not equal to the sum of individual actions. Jervis draws on a wide range of human endeavors to illustrate the nature of these system effects. He shows how increasing airport security might actually cost lives, not save them, and how removing dead trees (ostensibly to give living trees more room) may damage the health of an entire forest. Similarly, he highlights the interconnectedness of the political world as he describes how the Cold War played out and as he narrates the series of events — with their unintended consequences — that escalated into World War I.


The ramifications of developing a rigorous understanding of politics are immense, as Jervis demonstrates in his critique of current systemic theories of international politics — especially the influential work done by Kenneth Waltz. Jervis goes on to examine various types of negative and positive feedback, bargaining in different types of relationships, and the polarizing effects of alignments to begin building a foundation for a more realistic, more nuanced, theory of international politics. System Effects concludes by examining what it means to act in a system. It shows how political actors might modify their behavior in anticipation of system effects, and it explores how systemic theories of political behavior might account for the role of anticipation and strategy in political action. This work introduces powerful new concepts that will reward not only international relations theorists, but also all social scientists with interests in comparative politics and political theory.

"Drawing on a diverse body of scholarly research and a wealth of illuminating examples, Jervis shows that `system effects' are an important and often overlooked part of social and political life.... His insights will capture the imagination of those who puzzle over other social problems as well.... Viewed as a whole, System Effects offers a sobering and valuable moral."—Steven M. Walt, The Atlantic Monthly

"There are few doubts that System Effects is an important and timely book, one that should be studied closely not only by Foreign Offices, but by all people faced with the task of making decisions while uncertain about the consequences of alternative actions—and such people make a very large readership indeed."—Zygmunt Bauman, The Times Literary Supplement

"System Effects presents a new way of looking at the international system as a network of inter-connections. The scholarship is sound, historically rich, and logically compelling."—Glenn H. Snyder, Professor Emeritus, University of North Carolina at Chapel Hill