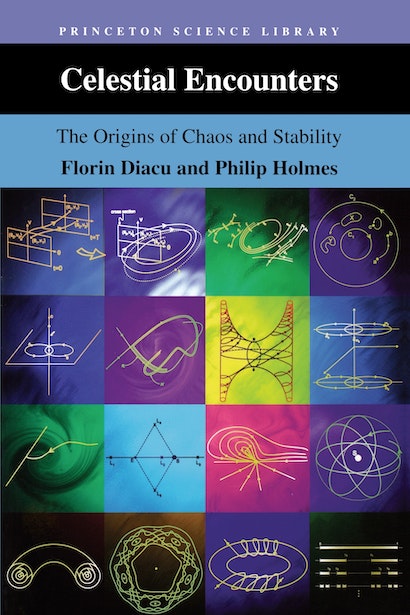 Celestial Encounters is for anyone who has ever wondered about the foundations of chaos. In 1888, the 34-year-old Henri Poincaré submitted a paper that was to change the course of science, but not before it underwent significant changes itself. “The Three-Body Problem and the Equations of Dynamics” won a prize sponsored by King Oscar II of Sweden and Norway and the journal Acta Mathematica, but after accepting the prize, Poincaré found a serious mistake in his work. While correcting it, he discovered the phenomenon of chaos.


Starting with the story of Poincaré’s work, Florin Diacu and Philip Holmes trace the history of attempts to solve the problems of celestial mechanics first posed in Isaac Newton’s Principia in 1686. In describing how mathematical rigor was brought to bear on one of our oldest fascinations — the motions of the heavens — they introduce the people whose ideas led to the flourishing field now called nonlinear dynamics.


In presenting the modern theory of dynamical systems, the models underlying much of modern science are described pictorially, using the geometrical language invented by Poincaré. More generally, the authors reflect on mathematical creativity and the roles that chance encounters, politics, and circumstance play in it.

"[S]tories about the history of celestial mechanics are the subject of this delightful book. The authors interweave numerous anecdotes about the personalities involved in the discoveries with technical details of the mathematical ideas themselves. . . . a pleasant mix of things technical and things historical. . . . written in a lively and informative way."—Robert L. Devaney, Science

"This book, which should be required reading for every nonspecialist astronomer, may well be headed toward becoming a classic."—Choice

"A particular strength of Celestial Encounters is the impression, conveyed with a deft touch, that mathematics is an international and collective effort made by real people for real reasons in the real world. All the players in the drama, alive or dead, come over as human beings who happen to have a passion for mathematics and an ability to fulfill that passion. This feature alone justifies buying the book."—Ian Stewart, New Scientist

"A lively introduction to the fascinating story of celestial mechanics."—Jacques Laskar, Nature

"Throughout the book one finds a vital quality that derives from the authors' real success in presenting mathematics as a human endeavor.... A valuable and accessible contribution to the chaos literature."—June Barrow-Green, Isis

"A pleasant mix of things technical and things historical.... Written in a lively and informative way."—Robert Devaney, Science