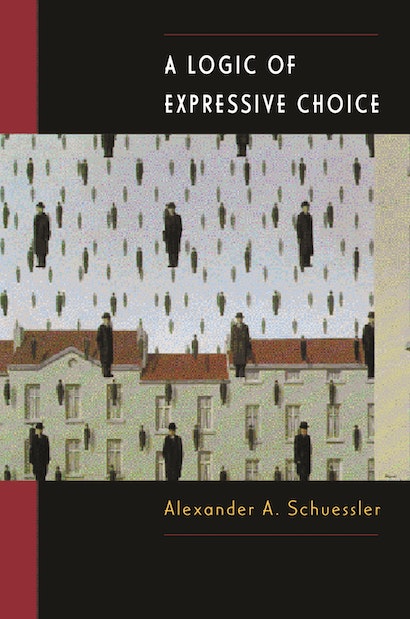 Alexander Schuessler has done what many deemed impossible: he has wedded rational choice theory and the concerns of social theory and anthropology to explain why people vote. The “paradox of participation” — why individuals cast ballots when they have virtually no effect on electoral outcomes — has long puzzled social scientists. And it has particularly troubled rational choice theorists, who like to describe political activity in terms of incentives. Schuessler’s ingenious solution is a “logic of expressive choice.” He argues in incentive-based (or “economic”) terms that individuals vote not because of how they believe their vote matters in the final tally but rather to express their preferences, allegiances, and thus themselves.


Through a comparative history of marketing and campaigning, Schuessler generates a “jukebox model” of participation and shows that expressive choice has become a target for those eliciting mass participation and public support. Political advisers, for example, have learned to target voters’ desire to express — to themselves and to others — who they are. Candidates, using tactics such as claiming popularity, invoking lifestyle, using ambiguous campaign themes, and shielding supporters from one another can get out their vote even when it is clear that an election is already lost or won.


This important work, the first of its kind, will appeal to anyone seeking to decipher voter choice and turnout, social movements, political identification, collective action, and consumer behavior, including scholars, graduate students, and upper-level undergraduates in political science, economics, sociology, anthropology, and marketing. It will contribute greatly to our understanding and prediction of democratic participation patterns and their consequences.

Alexander A. Schuessler is Assistant Professor in the Department of Politics at New York University and Director of the NYU Politics Data Center.

"Intriguing, carefully argued, complex, and engagingly written . . . this book makes a valuable contribution and deserves to be widely read by theorists on both sides of the theoretical divide."—Choice

"A well-written piece full of perceptive discussions . . . Schuessler's call to think of 'choice as being' is a powerful one. . . . He has provided abundant food for thought for social scientists of many different persuasions."—Luis Fernando Medina, American Journal of Sociology

"I have read many attempts to formulate and analyze what Schuessler calls Expressive Choice, but this is the first one that really comes off. The combination of analytical rigor and imaginative exposition makes it a treat, and a convincing one, to read. There is nothing else quite like it. It deserves a wide audience."—Thomas C. Schelling, Harvard University and University of Maryland

"In this innovative work, Alex Schuessler confidently enters the hotly contested terrain between the cultural and rational choice traditions. Many of us have sensed the opportunities that lie there; but few of us possess the background and training necessary to harvest them. Possessing both, Alex Schuessler marks the path toward a new synthesis. This is an important new work."—Robert H. Bates, Harvard University

"This is an important book on an important subject, and it is written in a way that will capture attention. Its central thesis is that an individual acts, or votes, with the goal of being someone rather than doing something."—Barry O'Neill, Stanford University

"A Logic of Expressive Choice is the single best explanation so far of the puzzle of voting. It makes major advances beyond EVERYTHING yet written in psychology, political theory, or economics."—Samuel Popkin, University of California, San Diego