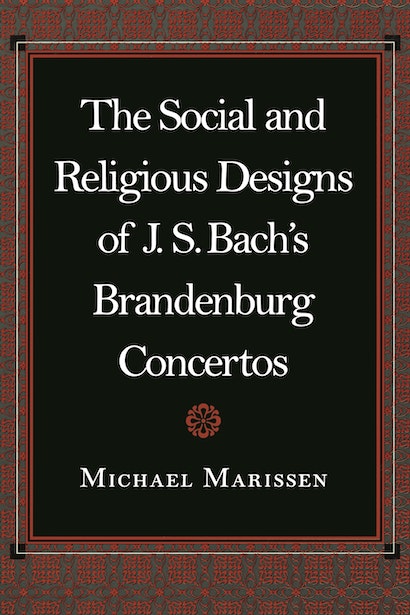 This new investigation of the Brandenburg Concertos explores musical, social, and religious implications of Bach’s treatment of eighteenth-century musical hierarchies. By reference to contemporary music theory, to alternate notions of the meaning of “concerto,” and to various eighteenth-century conventions of form and instrumentation, the book argues that the Brandenburg Concertos are better understood not as an arbitrary collection of unrelated examples of “pure” instrumental music, but rather as a carefully compiled and meaningfully organized set. It shows how Bach’s concertos challenge (as opposed to reflect) existing musical and social hierarchies.


Careful consideration of Lutheran theology and Bach’s documented understanding of it reveals, however, that his music should not be understood to call for progressive political action. One important message of Lutheranism, and, in this interpretation, of Bach’s concertos, is that in the next world, the heavenly one, the hierarchies of the present world will no longer be necessary. Bach’s music more likely instructs its listeners how to think about and spiritually cope with contemporary hierarchies than how to act upon them. In this sense, contrary to currently accepted views, Bach’s concertos share with his extensive output of vocal music for the Lutheran liturgy an essentially religious character.

Michael Marissen is Assistant Professor of Music at Swarthmore College. His most recent book is Lutheranism, Anti-Judaism, and Bach's "St. John Passion."

"The field of Bach studies has been greatly enriched by the appearance of [this book].... [It] is full of significant insights into the nature of the [Brandenburg Concertos].... [It] offers a fascinatingly fresh approach to these masterworks."—F. Ellsworth Peterson, Notes

"For anyone who is interested in exploring the remarkably rewarding challenge Bach lays down for the human family, this is a careful, helpful, plausible, and perceptive analysis."—Paul Westermeyer, Church History

"Michael Marissen's new and largely persuasive conceptions do much to increase our awareness of Bach's historical environment and his tendency to reformulate the conventions of his day. . . . The basic points of his book will appeal to a wide range of readers concerned with eighteenth-century studies."—John Butt, University of California, Berkeley

"A superb study that accomplishes more than many much longer books. While the Brandenburg concertos have often been examined by musicologists, they have not really been taken seriously as cultural texts. Marissen makes it very clear that this kind of interpretive work is crucial if we are to understand music's historical and cultural significance."—Susan McClary, University of California, Los Angeles