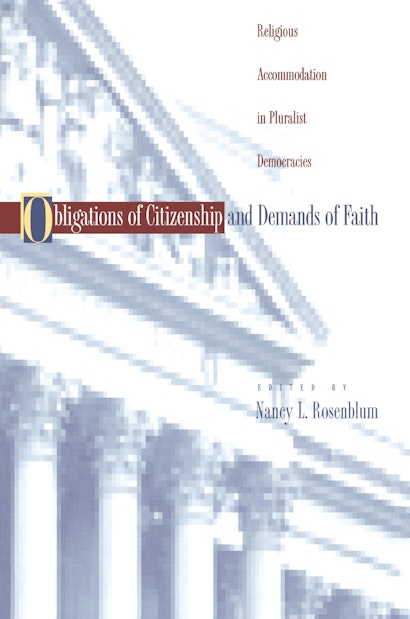 Of the many challenges facing liberal democracy, none is as powerful and pervasive today as those posed by religion. These are the challenges taken up in Obligations of Citizenship and Demands of Faith, an exploration of the place of religion in contemporary public life.


The essays in this volume suggest that two important shifts have altered the balance between the competing obligations of citizenship and faith: the growth of religious pluralism and the escalating calls of religious groups for some measure of autonomy or recognition from democratic majorities. The authors — political theorists, philosophers, legal scholars, and social scientists — collectively argue that more room should be made for religion in today’s democratic societies. Though they advocate different ways of carving out and justifying the proper bounds of “church and state” in pluralist democracies, they all write from within democratic theory and share the aim of democratic accommodation of religion. Alert to national differences in political circumstances and the particularities of constitutional and legal systems, these contributors consider the question of religious accommodation from the standpoint of institutional practices and law as well as that of normative theory.

Nancy L. Rosenblum is the Henry Merritt Wriston Professor and Professor of Political Science at Brown University. She is the author of Another Liberalism: Romanticism and the Reconstruction of Liberal Thought, Bentham's Theory of the Modern State, and Membership and Morals. She is the editor of Liberalism and the Moral Life and Thoreau's Political Writings.

"Our secular traditions and rhetoric have emerged in significant part in response to the claims of non-believers, who sought protection from the intrusions of religions. Rosenblum's anthology gives a new and thoughtful voice to believers and to the significance or value of their beliefs for democratic policies and civic engagement."—John Paul Ryan, The Law and Politics Book Review

"A very valuable collection, making accessible in one place a number of interesting and compelling arguments about and inquiries into the relationship between religious pluralism and democracy."—Joseph M. Knippenberg, Journal of Politics

"This book makes a powerful and important case for a greater presence of religion in contemporary democratic life and does this while insisting that this is consistent with the liberal ideals of a pluralist society. It is an important and distinguished volume."—Isaac Kramnick, Richard J. Schwartz, Cornell University