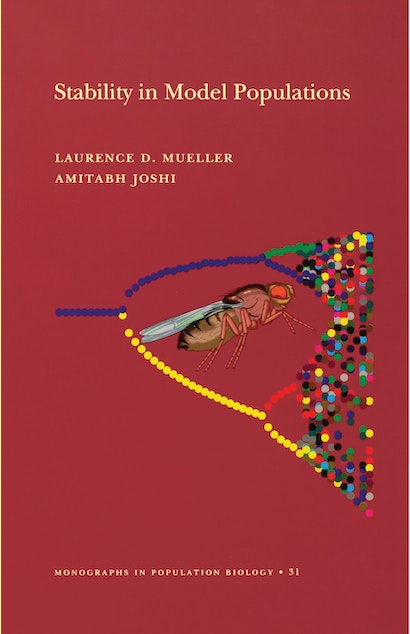 Throughout the twentieth century, biologists investigated the mechanisms that stabilize biological populations, populations which — if unchecked by such agencies as competition and predation — should grow geometrically. How is order in nature maintained in the face of the seemingly disorderly struggle for existence? In this book, Laurence Mueller and Amitabh Joshi examine current theories of population stability and show how recent laboratory research on model populations — particularly blowflies, Tribolium, and Drosophila — contributes to our understanding of population dynamics and the evolution of stability.


The authors review the general theory of population stability and critically analyze techniques for inferring whether a given population is in balance or not. They then show how rigorous empirical research can reveal both the proximal causes of stability (how populations are regulated and maintained at an equilibrium, including the relative roles of biotic and abiotic factors) and its ultimate, mostly evolutionary causes. In the process, they describe experimental studies on model systems that address the effects of age-structure, inbreeding, resource levels, and population structure on the stability and persistence of populations. The discussion incorporates the authors’ own findings on the evolution of population stability in Drosophila. They go on to relate laboratory work to studies of animals in the wild and to develop a general framework for relating the life history and ecology of a species to its population dynamics.


This accessible, finely written illustration of how carefully designed experiments can improve theory will have tremendous value for all ecologists and evolutionary biologists.

Laurence D. Mueller is Professor of Ecology and Evolutionary Biology at the University of California, Irvine. He has published extensively on stability, life-history evolution, and the evolution of aging. Amitabh Joshi is a Faculty Fellow in the Evolutionary and Organismal Biology Unit of the Jawaharlal Nehru Centre for Advanced Scientific Research in Bangalore, India. His current research interests are in life-history evolution, the evolution of ecological specialization, the evolutionary genetics of circadian organization, and small population and metapopulation dynamics.

"[This] book is a good introduction to one aspect of recent advances in population biology, and provides the rationale for further studies of laboratory systems."—Alan Hastings, Trends in Ecology & Evolution

"This is an extremely valuable book. It is unique in that it gives both a comprehensive survey of the theory of population growth dynamics and also the application of the theory to experimental populations. It must be read by anyone interested in this field, as well as the scholars themselves."—Timothy Prout, University of California-Davis

"Mueller and Joshi present an incredibly thorough and broad review of what is currently understood in the population ecology of single species, and their book will be on the reading list of most ecology graduate students. It is extremely well written and highly readable. It also presents an in-depth review of the three best studied insect laboratory organisms: Blowflies, Drosophilia, and Tribolium. The authors set an excellent example of how one may combine theoretically driven research with empirical methodology."—Pejman Rohani, Cambridge University

"This book is the first that I have seen which attempts to describe how the theory of population stability can be tested using controlled experiments. It makes a large contribution to the field and will be of great use to everyone who does research in population dynamics, no matter their individual approach or study system."—Graeme Ruxton, University of Glasgow