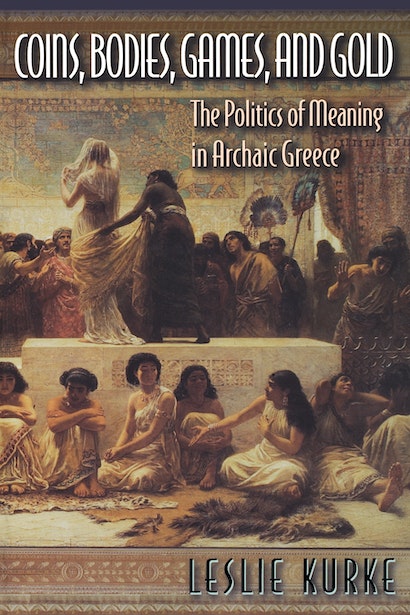 The invention of coinage in ancient Greece provided an arena in which rival political groups struggled to imprint their views on the world. Here Leslie Kurke analyzes the ideological functions of Greek coinage as one of a number of symbolic practices that arise for the first time in the archaic period. By linking the imagery of metals and coinage to stories about oracles, prostitutes, Eastern tyrants, counterfeiting, retail trade, and games, she traces the rising egalitarian ideology of the polis, as well as the ongoing resistance of an elitist tradition to that development. The argument thus aims to contribute to a Greek “history of ideologies,” to chart the ways ideological contestation works through concrete discourses and practices long before the emergence of explicit political theory.


To an elitist sensibility, the use of almost pure silver stamped with the state’s emblem was a suspicious alternative to the para-political order of gift exchange. It ultimately represented the undesirable encroachment of the public sphere of the egalitarian polis. Kurke re-creates a “language of metals” by analyzing the stories and practices associated with coinage in texts ranging from Herodotus and archaic poetry to Aristotle and Attic inscriptions. She shows that a wide variety of imagery and terms fall into two opposing symbolic domains: the city, representing egalitarian order, and the elite symposium, a kind of anti-city. Exploring the tensions between these domains, Kurke excavates a neglected portion of the Greek cultural “imaginary” in all its specificity and strangeness.

Leslie Kurke is Professor of Classics and Comparative Literature at the University of California, Berkeley. She is the author of The Traffic in Praise: Pindar and the Poetics of Social Economy and the co-editor, with Carol Dougherty, of Cultural Poetics in Archaic Greece: Cult, Performance, Politics.

"An excellent monograph on several aspects of the varied culture of ancient Greece. Scholars and graduate students will applaud her study."—Choice

"Eminently engaging . . . This is an important, fascinating book that should not be ignored by any monetary theorist."—L. Randall Wray, Journal of Economic Issues

"Kurke's book is lucidly and coherently written. . . . Even if we cannot unreservedly sign up to Kurke's thesis, we still feel that we have learned a great deal in following its progress."—Sue Blundell, American Historical Review

"Leslie Kurke's readings are always interesting, often simply brilliant. She does a superb job of presenting Herodotus as a locus for the preservation of the archaic debate. Highly innovative and well-documented, this book will be a model for future work in the broader field of historically grounded poetics."—Josiah Ober, Princeton University

"Leslie Kurke has written an original and exciting work that will refine our understanding and pique our interest in ancient metals and money. This book raises gripping questions about important ancient practices and ideologies and offers a powerful argument for using both positivistic and theoretical approaches to ancient material. Coins, Bodies, Games, and Gold will give classicists much to ponder and argue about; cultural historians and comparatists in other fields, too, should read this book."—Deborah Boedecker, Center for Hellenic Studies and Brown University