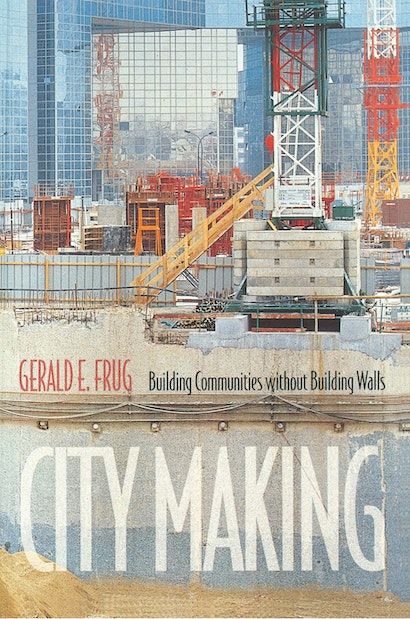 American metropolitan areas today are divided into neighborhoods of privilege and poverty, often along lines of ethnicity and race. City residents traveling through these neighborhoods move from feeling at home to feeling like tourists to feeling so out of place they fear for their security. As Gerald Frug shows, this divided and inhospitable urban landscape is not simply the result of individual choices about where to live or start a business. It is the product of government policies — and, in particular, the policies embedded in legal rules. A Harvard law professor and leading expert on urban affairs, Frug presents the first-ever analysis of how legal rules shape modern cities and outlines a set of alternatives to bring down the walls that now keep city dwellers apart.


Frug begins by describing how American law treats cities as subdivisions of states and shows how this arrangement has encouraged the separation of metropolitan residents into different, sometimes hostile groups. He explains in clear, accessible language the divisive impact of rules about zoning, redevelopment, land use, and the organization of such city services as education and policing. He pays special attention to the underlying role of anxiety about strangers, the widespread desire for good schools, and the pervasive fear of crime. Ultimately, Frug calls for replacing the current legal definition of cities with an alternative based on what he calls “community building” — an alternative that gives cities within the same metropolitan region incentives to forge closer links with each other.


An incisive study of the legal roots of today’s urban problems, City Making is also an optimistic and compelling blueprint for enabling American cities once again to embrace their historic role of helping people reach an accommodation with those who live in the same geographic area, no matter how dissimilar they are.

Gerald E. Frug is the Louis D. Brandeis Professor of Law at Harvard University. He is the author of Local Government Law.

"A pleasure to read. It is well written, lively and insightful. Frug treads where urban scholars rarely go—into the law and political theory of cities—and for this he should be congratulated."—Judith A. Garber, Urban Affairs Review

"Frug shows how American laws and legal traditions have hurt many cities, keeping them hobbled by state government and favoring suburbs at cities' expense. . . . Frug argues saliently that a city's character is shaped as much by its residents' perceptions of their civic responsibility as by its built environment."—Publishers Weekly

"Frug, a top Harvard legal scholar and urban affairs expert, makes a pathbreaking effort to document how government policies have shaped the fragmentation of the American metropolis. . . . [A] tight, well-written analysis."—Choice

"A powerful, important book. It is important not least because it showcases one of the last grand identities that seems to have evaded critical problematization—the identity of the romantic protagonist who by sheer force of imagination wills herself into a better world. Yet it is important also for the courage and vigor with which it takes on the tone and tropes of programmatic thought."—Fleur Johns, Urban Lawyer

"City Making is particularly welcome both as a challenge to a branch of the law that desperately needs rethinking and as a starting point for a new dialogue between law and urban and regional design."—Robert Fishman, Harvard Design Magazine

"The book is an important reference for those who want to explore alternative frameworks for city making. In addition, it alerts citizens to problems of their urban landscape, and how costly it is to run away from them."—Carla Braziliero Waehneldt, Journal of the American Planning Association

"Gerard Frug provides an important and eloquent critique of the way in which the US legal system disempowers deprived urban communities. He assesses a wide range of literature on urban communities to present a picture of socially and radically divided cities adversely affected by legal constraints, the complexities of local government and entrenched local vested political interests."—Brian Jacobs, Urban Studies

"Gerald Frug persuasively shows how the current legal powers and divided jurisdictions of municipalities in America reproduce privileges and threaten the solidarity that strong democracy requires. Frug does not stop with critique, however, but also boldly offers an alternative vision of regionally cooperating cities that support the well-being of all their inhabitants. The argument of City Making is both rigorous and inspiring."—Iris M. Young, author of Justice and the Politics of Difference and Intersecting Voices: Dilemmas of Gender, Political Philosophy, and Policy

"This is an innovative book by one of America's leading legal scholars. Frug creates a set of legal and policy frameworks for cities to practice themselves, rather than have imposed from outside. He has found a way to talk about decentralization that makes sense for our time. . . . I admire the clarity and precision with which the author writes."—Richard Sennett, author of Flesh and Stone: The Body and the City in Western Civilization

"Frug writes with authority and complete mastery of his subject matter, as well as with moving moral conviction. His proposals are bold and unexpected yet well bolstered by the force of his arguments and the scope of his historical and theoretical discussion. This is an excellent and important book. Very few works published in recent years deserve to be placed in the company of Lewis Mumford's classic The City in History. Frug's book is one of those few."—Richard T. Ford, Stanford University