How war trauma haunted the films of Weimar Germany 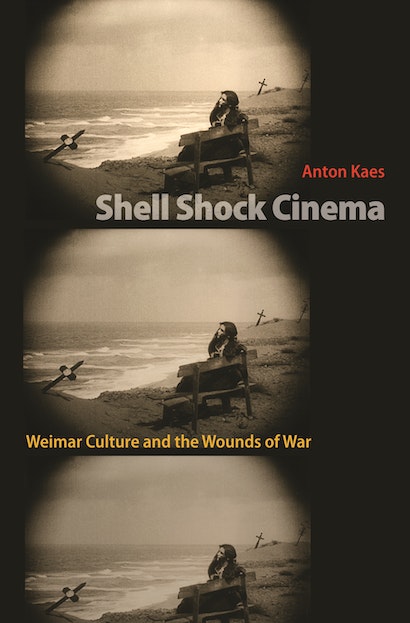 Shell Shock Cinema explores how the classical German cinema of the Weimar Republic was haunted by the horrors of World War I and the the devastating effects of the nation’s defeat. In this exciting new book, Anton Kaes argues that masterworks such as The Cabinet of Dr. Caligari, Nosferatu, The Nibelungen, and Metropolis, even though they do not depict battle scenes or soldiers in combat, engaged the war and registered its tragic aftermath. These films reveal a wounded nation in post-traumatic shock, reeling from a devastating defeat that it never officially acknowledged, let alone accepted.

A compelling contribution to the cultural history of trauma, Shell Shock Cinema exposes how German film gave expression to the loss and acute grief that lay behind Weimar’s sleek façade.

Anton Kaes is the Class of 1939 Professor of German and Film Studies at the University of California, Berkeley. He is the author of From Hitler to Heimat: The Return of History as Film and M, and the coeditor of The Weimar Republic Sourcebook.

"This long-awaited book by one of the leading experts on German cinema is a landmark in film studies. . . . Clearly written and beautifully produced with ample illustrations, impressive notes, and a useful filmography of Weimar DVDs, the book is a pleasure to read."—Choice

"One of Kaes's greatest strengths is his ability to speak to multiple audiences. His expert analysis is sure to appeal to students of film studies, but his interpretations are also accessible to readers with a limited knowledge of Weimar cinema. Accordingly, this book will interest scholars and students in the fields of German studies, film studies, and cultural history. Anton Kaes has long been recognized as a leading scholar of Weimar cinema and German culture, and Shell Shock Cinema represents another important contribution to these fields."—Brian K. Feltman, H-Net Reviews

"A combination of intensive genre analysis, well-observed contemporary cultural and psychological contextualization, and evocative cinematographic observation makes Shell Shock Cinema a splendid, even exemplary, cultural history that goes well beyond the bounds of previous studies. It is a wonderful read."—Peter Fritzsche, Modernism/Modernity

"Kaes's study represents a major departure from earlier approaches. Drawing on a growing body of work on trauma, the history of psychiatry, and World War I, he places this crucial chapter of modern cultural history within an entirely new analytic framework."—Andreas Killen, H-Madness

"The book is exceptionally readable and largely free of specialized jargon; it will be of interest on that basis to academics and non-academics alike. . . . Shell Shock Cinema is . . . an outstanding book that will be of considerable value to students and scholars."—Adam C. Stanley, Canadian Journal of History

"Shell Shock Cinema posits a complex and convincing model of the fraught relationship between historical violence and representation, as well as a unique perspective on the legacies of war."—Scott Spector, American Historical Review

"While Weimar psychology took film screening as a metaphor for the replay of World War I trauma under hypnosis, actual movies found relentless metaphors of their own—less as group therapy than in the thrill of referred pain—for a residual war on the nerves. Where Picasso saw cubism in the jigsaw collage of World War I camouflage, Kaes sees in screen montage the jagged forms of combat aftershock. His gripping account is a work of massive historical authority and steady revelation."—Garrett Stewart, author of Framed Time: Toward a Postfilmic Cinema

"Siegfried Kracauer initiated the first deeply interpretive history of cinema with his work From Caligari to Hitler, in which he claimed that Weimar cinema presaged the rise of Nazism. Now, in Shell Shock Cinema, Anton Kaes offers a fully researched and equally profound work of film history by moving in the other direction, showing how the fantastic cinema of the Weimar era responded to the most explosive event of modern history—World War I. This is cinema scholarship at its most mature and also most adventuresome."—Tom Gunning, author of The Films of Fritz Lang: Allegories of Vision and Modernity

"Shell Shock Cinema is a superb book. It bristles with insights and will be widely read. Anton Kaes is the leading scholar of German film. His book rises far above the usual writing on the subject because of the very extensive knowledge he brings to bear on each of the films, and the highly acute analyses he continually offers. This is cultural scholarship at its very best."—Eric D. Weitz, author of Weimar Germany

"With his deep knowledge of German cultural history, Kaes traces how the ghosts of the dead of World War I—the defining trauma of modernity—haunt all major Weimar films. Shell Shock Cinema is a brilliant book about the threshold between the visible and the invisible in post-traumatic narratives, with war memory displaced into stories of madmen, vampires, mythic heroes, and science fiction. In an entirely new key, Weimar cinema reemerges as a paradigm for our post-traumatic times."—Andreas Huyssen, author of Present Pasts: Urban Palimpsests and the Politics of Memory

"Tony Kaes, an outstanding expert on the Weimar Republic, presents his masterpiece, offering a convincing alternative to Siegfried Kracauer's famous argument. German silent cinema does not prefigure Hitler, but arises from the shell shocks of World War I."—Friedrich Kittler, Humboldt University of Berlin

"Forlornly a woman at the beach looks at the crosses marking the graves surrounding her. Those who return from the front haunt their homes as specters of a lost self, those who remain at home are caught in melancholia, unable to relinquish the loss they know only secondhand. An apt visual motto for these original readings of Weimar cinema, which we will never watch in quite the same way ever again."—Elisabeth Bronfen, author of Crossmappings: Essays on Visual Culture