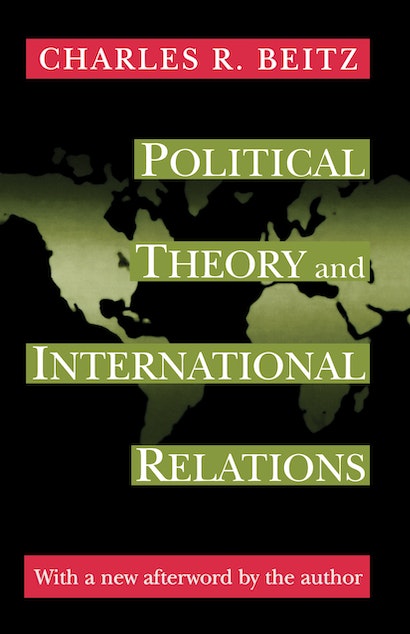 In this revised edition of his 1979 classic Political Theory and International Relations, Charles Beitz rejects two highly influential conceptions of international theory as empirically inaccurate and theoretically misleading. In one, international relations is a Hobbesian state of nature in which moral judgments are entirely inappropriate, and in the other, states are analogous to persons in domestic society in having rights of autonomy that insulate them from external moral assessment and political interference. Beitz postulates that a theory of international politics should include a revised principle of state autonomy based on the justice of a state’s domestic institutions, and a principle of international distributive justice to establish a fair division of resources and wealth among persons situated in diverse national societies.

Charles R. Beitz is Professor of Government at Bowdoin College. His other books include Political Equality: An Essay in Democratic Theory and International Ethics: A Philosophy and Public Affairs Reader, which he coedited with Marshall Cohen (both books are available from Princeton).

"[Beitz] has succeeded in clarifying the agenda of moral debate concerning the relations of states and of their inhabitants."—Terry Nardin, American Political Science Review

"Political Theory and International Relations is a fine piece of philosophical criticism and reconstruction that few established philosophers could have written.... This is a first-rate book on an issue as fundamental as it is neglected."—Henry Shue, Ethics

"This important book deals a deadly blow to the facile assumptions that support the widespread belief that moral judgment is fundamentally inapplicable or inappropriate in matters of foreign policy and international relations."—David V. Edwards, Social Science Quarterly