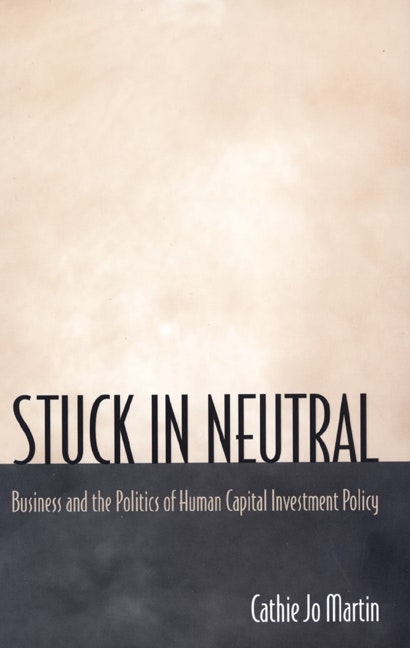 According to conventional wisdom, big business wields enormous influence over America’s political agenda and is responsible for the relatively limited scale of the country’s social policies. In Stuck in Neutral, however, Cathie Jo Martin challenges that view, arguing that big business has limited involvement in social policy and in many instances desires broader social interventions.


Combining hundreds of in-depth interviews with careful quantitative analysis, Martin shows that there is strong support among managers for government-sponsored training, health, work, and family initiatives to enhance workers’ skills and productivity. This support does not translate into political action, surprisingly, because big firms are not organized to intervene effectively. Every large company has its own staff to deal with government affairs, but overarching organizations for the most part lobby ineffectively for the collective interests of big business in the social realm. By contrast, small firms, which cannot afford to lobby the government directly, rely on representative associations to speak for them. The unified voice of small business comes through much more clearly in policy circles than the diverse messages presented by individual corporations, ensuring that the small-business agenda of limited social policy prevails.


A vivid portrayal of the interplay between business and politics, Stuck in Neutral offers a fresh take on some of the most controversial issues of our day. It is a must read for anyone interested in the past, present, and future of the American welfare state and political economy.

Cathie Jo Martin is Associate Professor of Political Science at Boston University. She is the author of Shifting the Burden: The Struggle over Growth and Corporate Taxation.

"Whether big business has been stuck in neutral or just parked beside issues of secondary interest, Martin's book encourages us to review what we think we know about business and the policy process."—Neil J. Mitchell, Governance

"A vital and highly original book for all political scientists working on business and politics or interest groups in general. Martin shows that we cannot simply deduce what corporations' interests or political objectives are; in this important and original study she shows instead that the policy goals and tactics of corporations are themselves constructed in a complex political process. This book is a model of how empirical research and theory can be brought together."—Graham K. Wilson, University of Wisconsin, Madison

"Cathie Jo Martin's Stuck in Neutral is a brilliantly researched study of the development of the policy preferences of American businesses and business influence on public policy. Its well documented conclusions on the determinants of variation in the policy orientation of businesses challenge basic assumptions of both rational choice and class analytic approaches in social science and make it essential reading not only for those interested in public policy but also for all political scientists and sociologists interested in these central theoretical disputes in the disciplines."—John D. Stephens, University of North Carolina

"A masterful analysis of business and government that adds up to an explanation of American social policy-past, present, and future. Cathie Jo Martin describes the institutional dynamics of corporate politics while eloquently catching the voices and the aspirations of business men and women. Stuck in Neutral is wise, balanced, engaging, persuasive, theoretically sophisticated, and entirely unexpected in its conclusions."—James A. Morone, Brown University