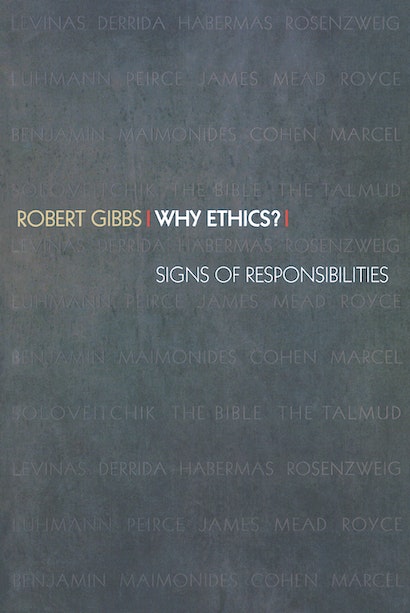 Robert Gibbs presents here an ambitious new theory of ethics. Drawing on a striking combination of intellectual traditions, including Jewish thought, continental philosophy, and American pragmatism, Gibbs argues that ethics is primarily concerned with responsibility and is not — as philosophers have often assumed — principally a matter of thinking about the right thing to do and acting in accordance with the abstract dictates of reason or will. More specifically, ethics is concerned with attending to others’ questions and bearing responsibility for what they do.


Gibbs builds this innovative case by exploring the implicit responsibilities in a broad range of human interactions, paying especially close attention to the signs that people give and receive as they relate to each other. Why Ethics? starts by examining the simple actions of listening and speaking, reading and writing, and by focusing on the different responsibilities that each action entails. The author discusses what he describes as the mutual responsibilities implicit in the actions of reasoning, mediating, and judging. He assesses the relationships among ethics, pragmatics, and Jewish philosophy. The book concludes by looking at the relation of memory and the immemorial, emphasizing the need to respond for past actions by confessing, seeking forgiveness, and making reconciliations.


In format, Gibbs adopts a Talmudic approach, interweaving brief citations from primary texts with his commentary. He draws these texts from diverse thinkers and sources, including Levinas, Derrida, Habermas, Rosenzweig, Luhmann, Peirce, James, Royce, Benjamin, Maimonides, the Bible, and the Talmud. Ranging over philosophy, literary theory, social theory, and historiography, this is an ambitious and provocative work that holds profound lessons for how we think about ethics and how we seek to live responsibly.

Robert Gibbs is Professor of Philosophy at the University of Toronto. Author of Correlations in Rosenzweig and Levinas and coauthor of Reasoning after Revelation: Dialogues in Postmodern Jewish Philosophy, he has written widely on questions of contemporary continental philosophy and its relations with Jewish thought.

"In this thought-provoking new book, Gibbs centers ethics on personal responsibility . . .He combines analysis of the Talmud with the pragmatics of Charles Peirce, George Herbert Mead, and Jurgen Habermas in an unusual and illuminating way."—Library Journal

"[An] excellent, challenging work. . . . In focusing on responsibility, Gibbs clearly seeks to change the parameters of ethical inquiry. Yet what makes his work so successful is that it takes modern ethics seriously even while questioning it, seeking to hear its concerns while repairing the harm and suffering its excesses have caused. It . . . provides an excellent model for how religious ethics can both take responsibility for and transform modern inquiry."—William W. Young III, Theological Studies