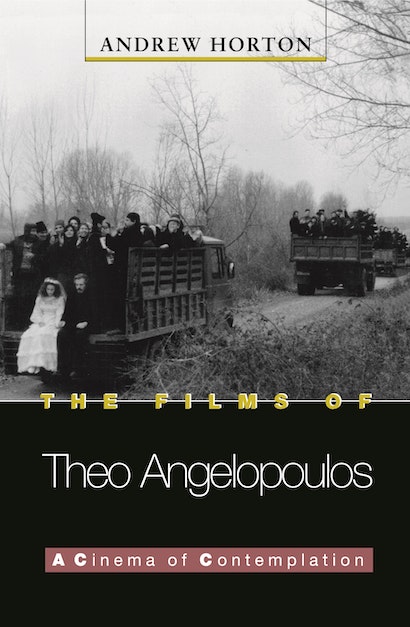 Greek film director Theo Angelopoulos is one of the most influential and widely respected filmmakers in the world today, yet his films are still largely unknown to the American public. In the first book in English to focus on Angelopoulos’s unique cinematic vision, Andrew Horton provides an illuminating contextual study that attempts to demonstrate the quintessentially Greek nature of the director’s work. Horton situates the director in the context of over 3,000 years of Greek culture and history. Somewhat like Andrei Tarkovsky in Russia or Antonioni in Italy, Angelopoulos has used cinema to explore the history and individual identities of his culture. With such far-reaching influences as Greek myth, ancient tragedy and epic, Byzantine iconography and ceremony, Greek and Balkan history, modern Greek pop culture including bouzouki music, shadow puppet theater, and the Greek music hall tradition, Angelopoulos emerges as an original “thinker” with the camera, and a distinctive director who is bound to make a lasting contribution to the art form.


In a series of films including The Travelling Players, Voyage to Cythera, Landscape in the Mist, The Suspended Step of the Stork, and most recently in Ulysses’ Gaze starring Harvey Keitel (winner of the 1995 Cannes Film Festival Grand Prix), Angelopoulos has developed a remarkable cinematic style, characterized by carefully composed scenes and an enormous number of extended long shots. In an age of ever decreasing attention spans, Angelopoulos offers a cinema of contemplation.

Andrew Horton is Jeanne H. Smith Professor of Film and Video Studies at the University of Oklahoma. He is the author of Writing the Character Centered Screenplay, Russian Critics on a Cinema of Glasnost, and Comedy/Cinema/Theory, and coauthor, with Michael Brashinsky, of The Zero Hour: Glasnost and Soviet Cinema in Transition.

"Andrew Horton anatomizes a unique aesthetic sensibility, investigating the power of these images with his own impressive powers of observation and learning."—Jack Granath, Rain Taxi

"[A] thorough study of Angelopoulos. . . This is the first book on Angelopoulos in English. . . . Horton comments knowledgeably on the many directors who have influenced Angelopoulos. . .and on the artistic influences of the Greek Orthodox church and Byzantine and classical Greek culture."—Choice

"This [book] . . . could not have come at a better time or from a more qualified critic. . . . Andrew Horton opens the door to a complex body of work and will do much to correct the notion that Angelopoulos is simply an eccentric individualist or a director overly infatuated with technique."—Dan Georgakas, Film Quarterly