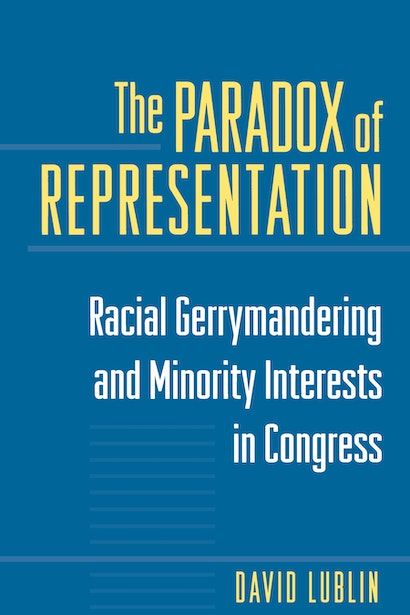 In The Paradox of Representation David Lublin offers an unprecedented analysis of a vast range of rigorous, empirical evidence that exposes the central paradox of racial representation: Racial redistricting remains vital to the election of African Americans and Latinos but makes Congress less likely to adopt policies favored by blacks. Lublin’s evidence, together with policy recommendations for improving minority representation, will make observers of the political scene reconsider the avenues to fair representation.


Using data on all representatives elected to Congress between 1972 and 1994, Lublin examines the link between the racial composition of a congressional district and its representative’s race as well as ideology. The author confirms the view that specially drawn districts must exist to ensure the election of African Americans and Latinos. He also shows, however, that a relatively small number of minorities in a district can lead to the election of a representative attentive to their interests. When African Americans and Latinos make up 40 percent of a district, according to Lublin’s findings, they have a strong liberalizing influence on representatives of both parties; when they make up 55 percent, the district is almost certain to elect a minority representative.


Lublin notes that particularly in the South, the practice of concentrating minority populations into a small number of districts decreases the liberal influence in the remaining areas. Thus, a handful of minority representatives, almost invariably Democrats, win elections, but so do a greater number of conservative Republicans. The author proposes that establishing a balance between majority-minority districts and districts where the minority population would be slightly more dispersed, making up 40 percent of a total district, would allow more African Americans to exercise more influence over their representatives.

David Lublin is Assistant Professor in the Department of Government and International Studies at the University of South Carolina.

"A soundly reasoned and persuasively argued analysis of a pressing contemporary issue."—Choice

"An important book on some of the most vexing questions of race and politics we currently face. David Lublin brings an honest, careful, and systematic social scientist's approach to highly charged issues that are too often ideologically debated on both left and right with little knowledge of the actual facts. The findings of this timely book will be of considerable interest not just to academics, but to policymakers, journalists, consultants, and all those interested in how America's democratic institutions can best be designed to protect minority interests while preserving majority rule."—Richard H. Pildes, University of Michigan Law School

"[The Paradox of Representation] is one of the best works on the topic of race and representation in Congress. The real strength of the book is that Lublin provides a clear, dispassionate analysis of this very volatile issue, while offering his own proposals. This objective analysis is exactly what is needed to help inform the policy debate."—David T. Canon, University of Wisconsin-Madison