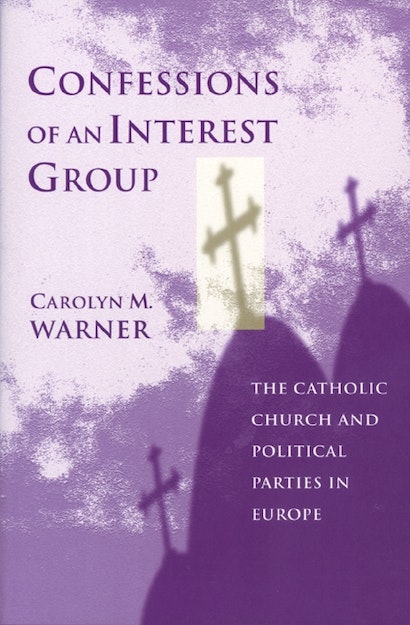 Following World War II, the Catholic Church in Europe faced the challenge of establishing political influence with newly emerging democratic governments. The Church became, as Carolyn Warner pointedly argues, an interest group like any other, seeking to attain and solidify its influence by forming alliances with political parties. The author analyzes the Church’s differing strategies in Italy, France, and Germany using microeconomic theories of the firm and historical institutionalism. She demonstrates how only a strategic perspective can explain the choice and longevity of the alliances in each case. In so doing, the author challenges earlier work that ignores the costs to interest groups and parties of sustaining or breaking their reciprocal links.

Confessions of an Interest Group challenges the view of the Catholic Church as solely a moral force whose interests are seamlessly represented by the Christian Democratic parties. Blending theory, cultural narrative, and archival research, Warner demonstrates that the French Church’s superficial and brief connection with a political party was directly related to its loss of political influence during the War. The Italian Church’s power, on the other hand, remained stable through the War, so the Church and the Christian Democrats more easily found multiple grounds for long-term cooperation. The German Church chose yet another path, reluctantly aligning itself with a new Catholic-Protestant party. This book is an important work that expands the growing literature on the economics of religion, interest group behavior, and the politics of the Catholic Church.

"This is a book that opens eyes, not only about the role of religion in politics and how to understand it, but about the proper ways of understanding party-interest group relations in all sorts of settings. It elaborates a perspective that is innovative, bold, and powerful. I came away deeply impressed."—Peter Hall, Harvard University

"This book will undoubtedly be read and debated by a wide range of scholars in political science and sociology. Warner makes a bold argument and adds substantially to our knowledge of the Catholic Church, interest groups, and European politics."—Anthony Gill, University of Washington