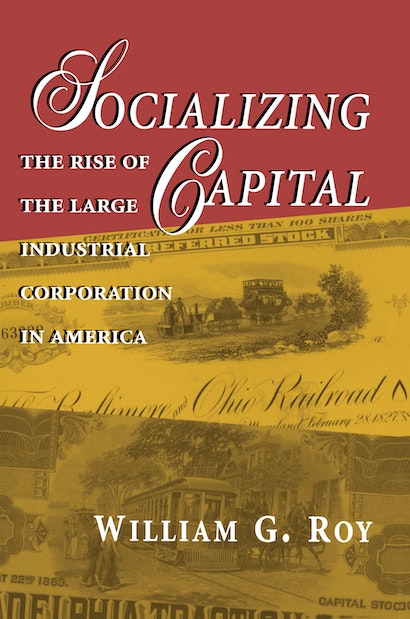 Ever since Adolph Berle and Gardiner Means wrote their classic 1932 analysis of the American corporation, The Modern Corporation and Private Property, social scientists have been intrigued and challenged by the evolution of this crucial part of American social and economic life. Here William Roy conducts a historical inquiry into the rise of the large publicly traded American corporation. Departing from the received wisdom, which sees the big, vertically integrated corporation as the result of technological development and market growth that required greater efficiency in larger scale firms, Roy focuses on political, social, and institutional processes governed by the dynamics of power.


The author shows how the corporation started as a quasi-public device used by governments to create and administer public services like turnpikes and canals and then how it germinated within a system of stock markets, brokerage houses, and investment banks into a mechanism for the organization of railroads. Finally, and most particularly, he analyzes its flowering into the realm of manufacturing, when at the turn of this century, many of the same giants that still dominate the American economic landscape were created. Thus, the corporation altered manufacturing entities so that they were each owned by many people instead of by single individuals as had previously been the case.

William G. Roy is Professor of Sociology at the University of California, Los Angeles. He specializes in large-scale political and economic transformations.

"Socializing Capital is a shining example of the `new economic sociology.' Roy's question is bold because it challenges the economic orthodoxy that the modern corporation arose because of its efficiency. His answer is creative because it weaves together insights from power and institutional perspectives to revise the history of the modern corporation."—Frank Dobbin, Contemporary Sociology

"William G. Roy's ambitious book about the ascendancy of the large industrial corporation in the United States sheds new light on a complex and timely subject.... Socializing Capital is a significant scholarly work, rich in detail, that makes important contributions to the historical study of corporate power."—Scott R. Bowman, American Journal of Sociology

"Richly detailed, this book builds on the significant work of historians, economists, and social scientists who have dominated the field of business history for a generation or more. It is a major contribution. . . ."—Choice