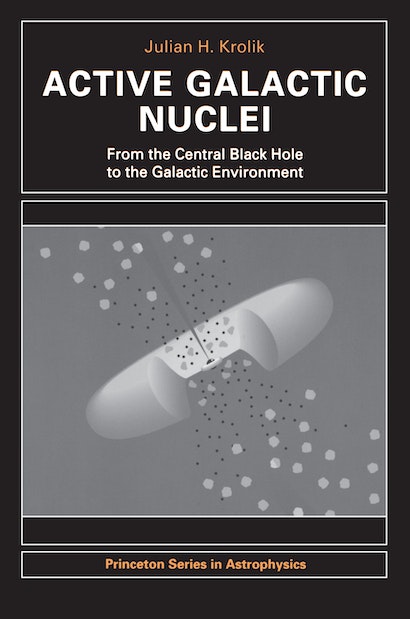 This is the first comprehensive treatment of active galactic nuclei — the cosmic powerhouses at the core of many distant galaxies. The term active galactic nuclei refers to quasars, radio galaxies, Seyfert galaxies, blazars, and related objects, all of which are believed to share a similar central engine — a supermassive black hole many times the mass of the Sun. Astrophysicists have studied these phenomena for the past several decades and have begun to develop a consensus about many of their properties and internal mechanisms. Julian Krolik, one of the world’s leading authorities on the subject, sums up leading ideas from across the entire range of research, making this book an invaluable resource for astronomers, physicists interested in applications of the theory of gravitation, and graduate students.


Krolik begins by addressing basic questions about active galactic nuclei: What are they? How can they be found? How do they evolve? He assesses the evidence for massive black holes and considers how they generate power by accretion. He discusses X-ray and g-ray emission, radio emission and jets, emission and absorption lines, anisotropic appearance, and the relationship between an active nucleus and its host galaxy. He explores the mysteries of what ignites, fuels, and extinguishes active galactic nuclei, and concludes with a general review of where the field now stands. The book is unique in paying careful attention to relevant physics as well as astronomy, reflecting in part the importance of general relativity to understanding active galactic nuclei. Clear, authoritative, and detailed, this is crucial reading for anyone interested in one of the most dynamic areas of astrophysics today.

Julian H. Krolik is Professor of Physics and Astronomy at The Johns Hopkins University. He has written widely on theoretical astrophysics, specializing in active galactic nuclei.

"Krolik treats almost every aspect of the AGN phenomenon, . . . . This global survey of AGN physics makes Krolik's book the most useful in the field for years. . . . [A] valuable reference for anybody interested in the physics of these cosmic powerhouses."—Chris Reynolds, Nature

"A broad and thorough review of the standard model for AGN, including observational information and theoretical modeling. It will provide graduate and advanced undergraduate students with an excellent introduction to the field."—Ruth A. Daly, Physics Today