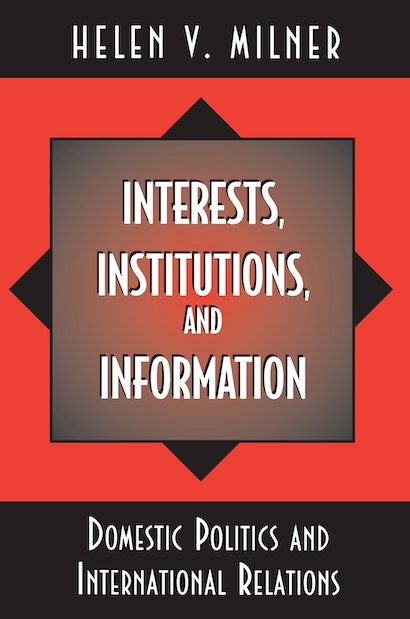 Increasingly scholars of international relations are rallying around the idea that “domestic politics matters.” Few, however, have articulated precisely how or why it matters. In this significant book, Helen Milner lays out the first fully developed theory of domestic politics, showing exactly how domestic politics affects international outcomes. In developing this rational-choice theory, Milner argues that any explanation that treats states as unitary actors is ultimately misleading. She describes all states as polyarchic, where decision-making power is shared between two or more actors (such as a legislature and an executive). Milner constructs a new model based on two-level game theory, reflecting the political activity at both the domestic and international levels. She illustrates this model by taking up the critical question of cooperation among nations.


Milner examines the central factors that influence the strategic game of domestic politics. She shows that it is the outcome of this internal game — not fears of other countries’ relative gains or the likelihood of cheating — that ultimately shapes how the international game is played out and therefore the extent of cooperative endeavors. The interaction of the domestic actors’ preferences, given their political institutions and levels of information, defines when international cooperation is possible and what its terms will be. Several test cases examine how this argument explains the phases of a cooperative attempt: the initiation, the negotiations at the international level, and the eventual domestic ratification. The book reaches the surprising conclusion that theorists — neo-Institutionalists and Realists alike — have overestimated the likelihood of cooperation among states.

Helen V. Milner is Professor of Political Science and a member of the Institute on War and Peace Studies at Columbia University. She is the author of Resisting Protectionism: Global Industries and the Politics of International Trade (Princeton).

"[This book] brings us back to the politics of domestic-level analyses to balance the emphasis on economics. It also provides important insights into questions concerning the foreign policy behavior of different regime-types. . . This is a powerful work that . . . gives us a new lens through which we may examine issues central to the field."—Political Science Quarterly