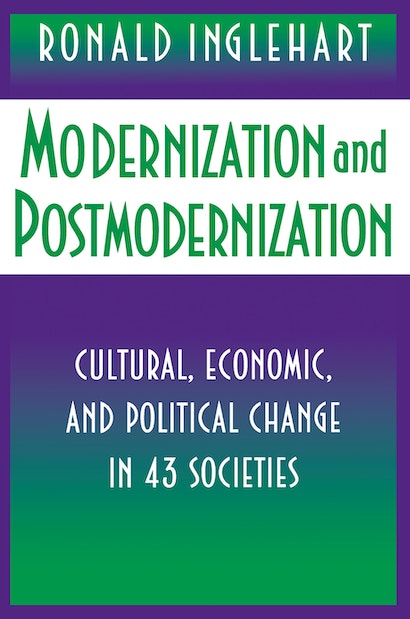 Ronald Inglehart argues that economic development, cultural change, and political change go together in coherent and even, to some extent, predictable patterns. This is a controversial claim. It implies that some trajectories of socioeconomic change are more likely than others — and consequently that certain changes are foreseeable. Once a society has embarked on industrialization, for example, a whole syndrome of related changes, from mass mobilization to diminishing differences in gender roles, is likely to appear. These changes in worldviews seem to reflect changes in the economic and political environment, but they take place with a generational time lag and have considerable autonomy and momentum of their own. But industrialization is not the end of history. Advanced industrial society leads to a basic shift in values, de-emphasizing the instrumental rationality that characterized industrial society. Postmodern values then bring new societal changes, including democratic political institutions and the decline of state socialist regimes. To demonstrate the powerful links between belief systems and political and socioeconomic variables, this book draws on a unique database, the World Values Surveys. This database covers a broader range than ever before available for looking at the impact of mass publics on political and social life. It provides information from societies representing 70 percent of the world’s population — from societies with per capita incomes as low as $300 per year to those with per capita incomes one hundred times greater and from long-established democracies with market economies to authoritarian states.

Ronald Inglehart is Professor of Political Science and Program Director at the Institute for Social Research at the University of Michigan. Among his books are The Silent Revolution: Changing Values and Political Styles among Western Publics and Culture Shift in Advanced Industrial Society, both published by Princeton University Press.

"[This is] Inglehart's most convincing demonstration of the theory of intergenerational value change, the cornerstone of his scholarship. . . . With data from 43 societies collected over nearly three decades, and representing 70 percent of the world's population . . .the analysis of Inglehart's unprecedented comparative dataset is nuanced, sophisticated, and certain to stimulate the kind of criticism that will deepen our understanding of social change."—The Review of Politics

"Ronald Inglehart is one of the very few scholars to have remained consistently engaged with both the study of political culture and the development of modernization theory over the past few decades. In Modernization and Postmodernization, he presents the cumulative results of decades of research on the interrelationships among cultural values, democracy, and capitalism. His findings are consistently thought-provoking and often surprising and should inspire prolonged and productive controversy. . . . Overall, Inglehart's fascinating book raises tantalizing questions about the long-term trajectory of value change in modern society."—Stephen E. Hanson, Comparative Politics

"This latest book by Ronald Inglehart represents another path-breaking advance in his three-decade-long exploration of cultural change in contemporary societies. Few scholars are as adept as Inglehart in weaving together a broad vision of historical change and a fine-grained analysis of survey results into a coherent account of how the world is changing around us."—Robert D. Putnam, author of Making Democracy Work

"Inglehart's new book analyzes the most encompassing dataset on political values and orientations ever collected, in order to assess cultural theories of political and economic change. His well-understood (and subtly reinterpreted) version of modernization theory will draw throngs of critics, as did Inglehart's previous works. But he provides clinching evidence for a logic of cultural development that even his toughest critics can not ignore."—Herbert Kitschelt, Professor of Political Science, Duke University