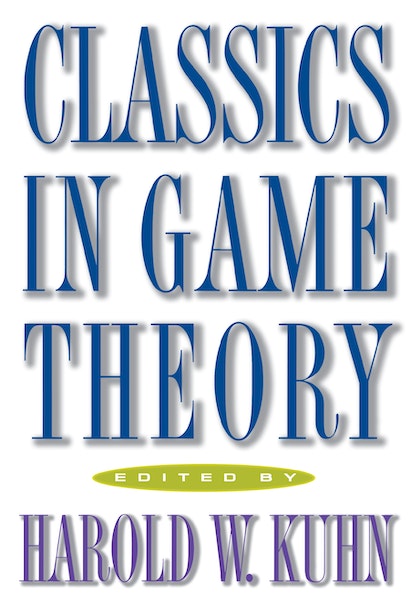 Classics in Game Theory assembles in one sourcebook the basic contributions to the field that followed on the publication of Theory of Games and Economic Behavior by John von Neumann and Oskar Morgenstern (Princeton, 1944). The theory of games, first given a rigorous formulation by von Neumann in a in 1928, is a subfield of mathematics and economics that models situations in which individuals compete and cooperate with each other. In the “heroic era” of research that began in the late 1940s, the foundations of the current theory were laid; it is these fundamental contributions that are collected in this volume. In the last fifteen years, game theory has become the dominant model in economic theory and has made significant contributions to political science, biology, and international security studies. The central role of game theory in economic theory was recognized by the award of the Nobel Memorial Prize in Economic Science in 1994 to the pioneering game theorists John C. Harsanyi, John Nash, and Reinhard Selten. The fundamental works for which they were honored are all included in this volume.

Harold Kuhn, himself a major contributor to game theory for his reformulation of extensive games, has chosen eighteen essays that constitute the core of game theory as it exists today. Drawn from a variety of sources, they will be an invaluable tool for researchers in game theory and for a broad group of students of economics, political science, and biology.

Harold W. Kuhn is Professor Emeritus of Mathematical Economics at Princeton University and is internationally known for his joint paper with the late Albert W. Tucker that initiated the theory of "nonlinear programming." In 1994, on the occasion of the awarding of the Nobel Prizes, he organized and chaired a historic Nobel Seminar on the work of John Nash in game theory; this seminar is published in Les Prix Nobel 1994 (Almquist & Wicksell, 1994).

"This volume assembles in one sourcebook the basic contributions to the field [of game theory]. . ."—L'Enseignement Mathematique