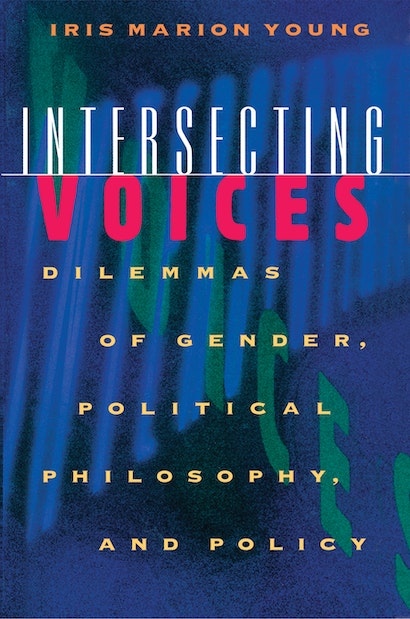 Iris Marion Young is known for her ability to connect theory to public policy and practical politics in ways easily understood by a wide range of readers. This collection of essays, which extends her work on feminist theory, explores questions such as the meaning of moral respect and the ways individuals relate to social collectives, together with timely issues like welfare reform, same-sex marriage, and drug treatment for pregnant women. One of the many goals of Intersecting Voices is to energize thinking in those areas where women and men are still deprived of social justice.

Essays on the social theory of groups, communication across difference, alternative principles for family law, exclusion of single mothers from full citizenship, and the ambiguous value of home lead to questions important for rethinking policy. How can women be conceptualized as a single social collective when there are so many differences among them? What spaces of discourse are required for the full inclusion of women and cultural minorities in public discussion? Can the conceptual and practical link between self-sufficiency and citizenship that continues to relegate some people to second-class status be broken? How could legal institutions be formed to recognize the actual plurality of family forms? In formulating such questions and the answers to them, Young draws upon ideas from both Anglo-American and Continental philosophers, including Seyla Benhabib, Joshua Cohen, Luce Irigaray, Susan Okin, William Galston, Simone de Beauvoir, and Michel Foucault.

Iris Marion Young is Professor of Public and International Affairs at the University of Pittsburgh. Her previous books include Justice and the Politics of Difference (Princeton) and Throwing Like a Girl and Other Essays in Feminist Philosophy and Social Theory.

"In all of these essays, Young makes political theory into 'the art of the possible'. It is her great strength as a theorist that she is able to identify issues in both academic literature and the public mind that philosophers have construed too narrowly, or failed to address altogether. . . . Young is undoubtedly one of the more intelligently radical philosophers writing in the US."—Philosophy in Review

"In political theory today, feminist theory is the area most alive with innovative and exciting work, and Iris Marion Young is one of the leading contributors to this development. In these essays, she shows how a feminist perspective can awaken us to new issues and transform familiar questions in both political theory and practical politics."—Joseph H. Carens, University of Toronto